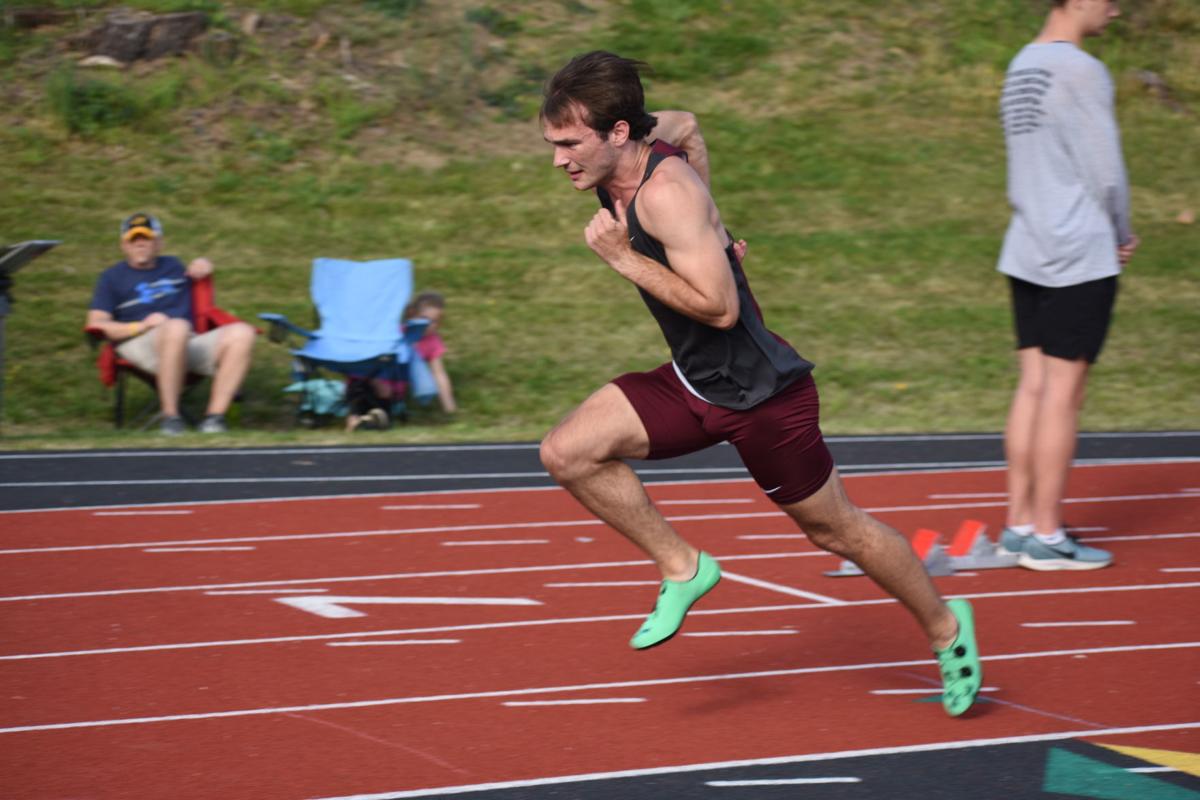 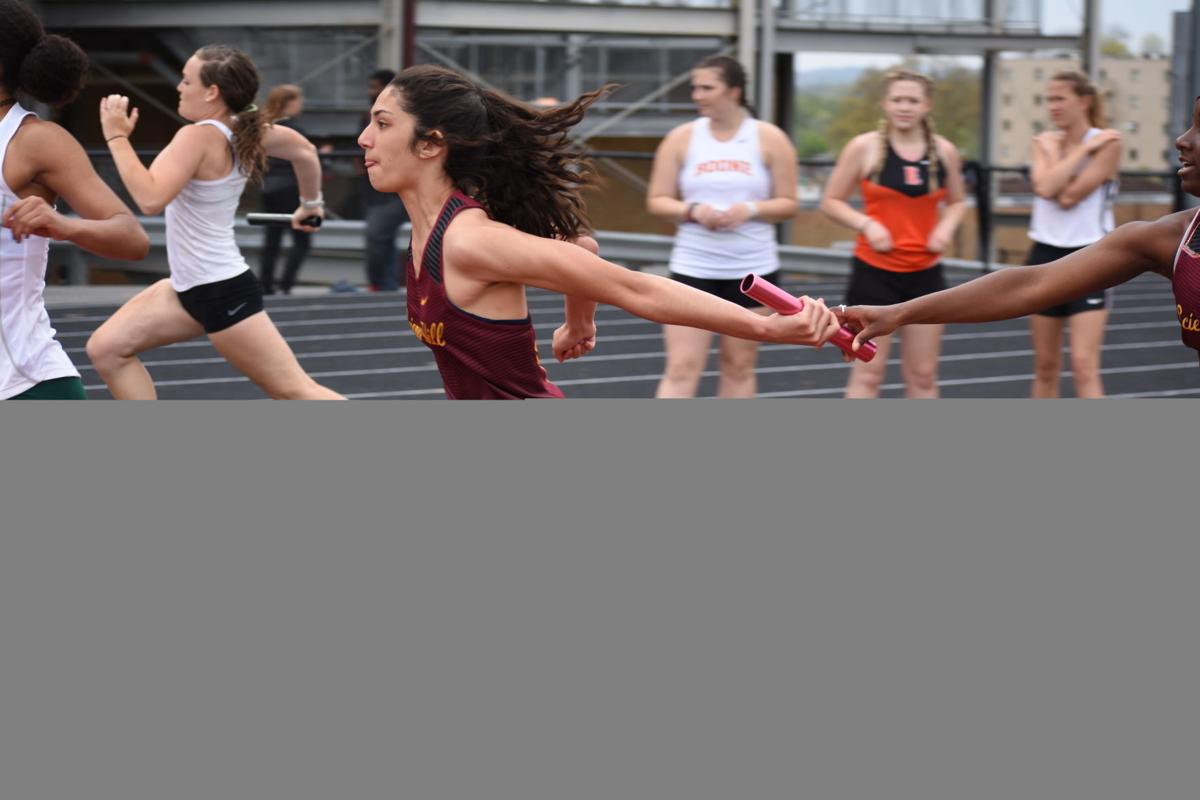 Science Hill sophomore Mary Reed leads the girls sprints in both the 100 and 200 meter dash. 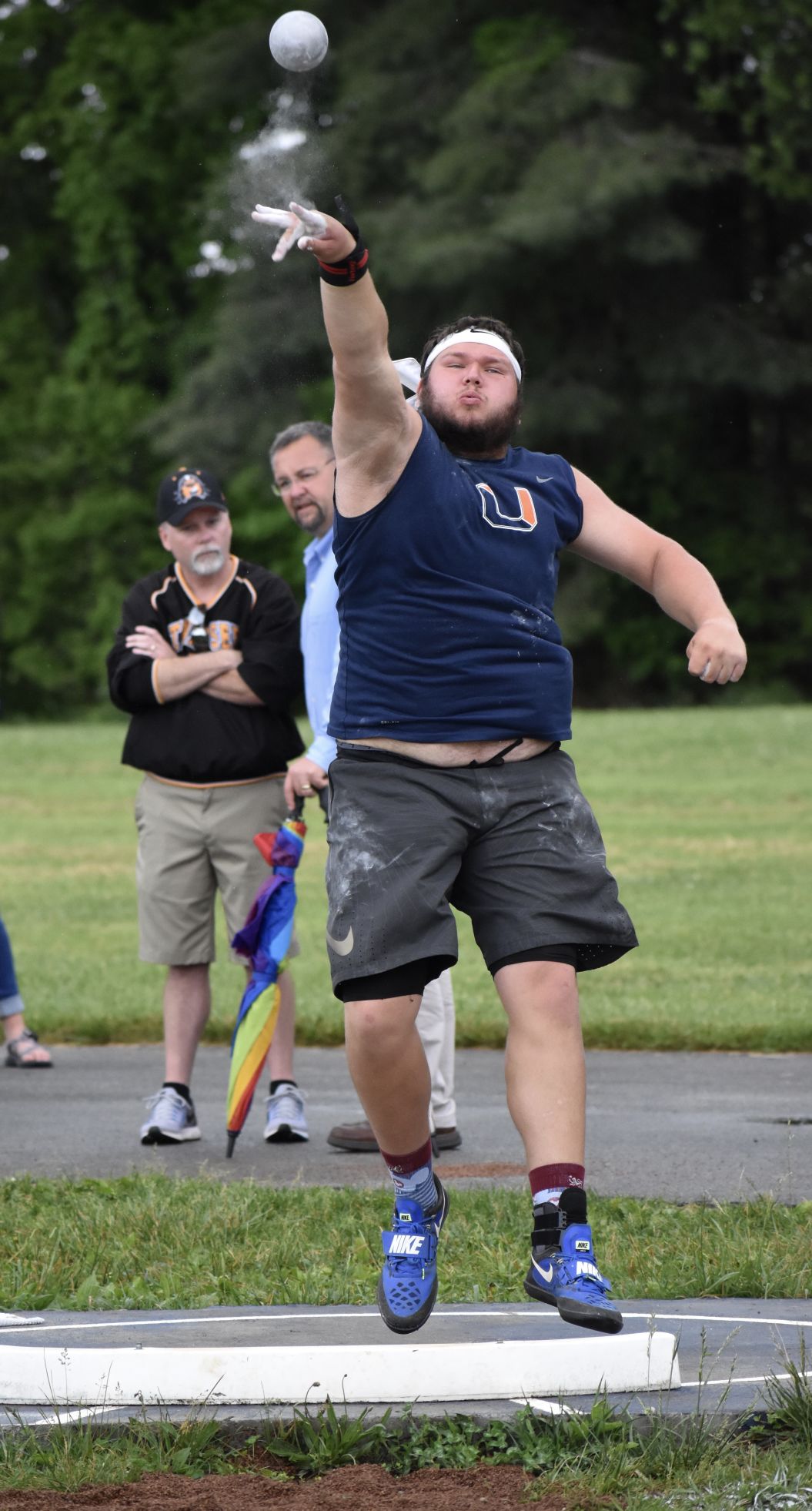 Union’s Justin Barnett headlines a strong field in the boys throwing events. He has a season best of 56-3.5 in the shot put. 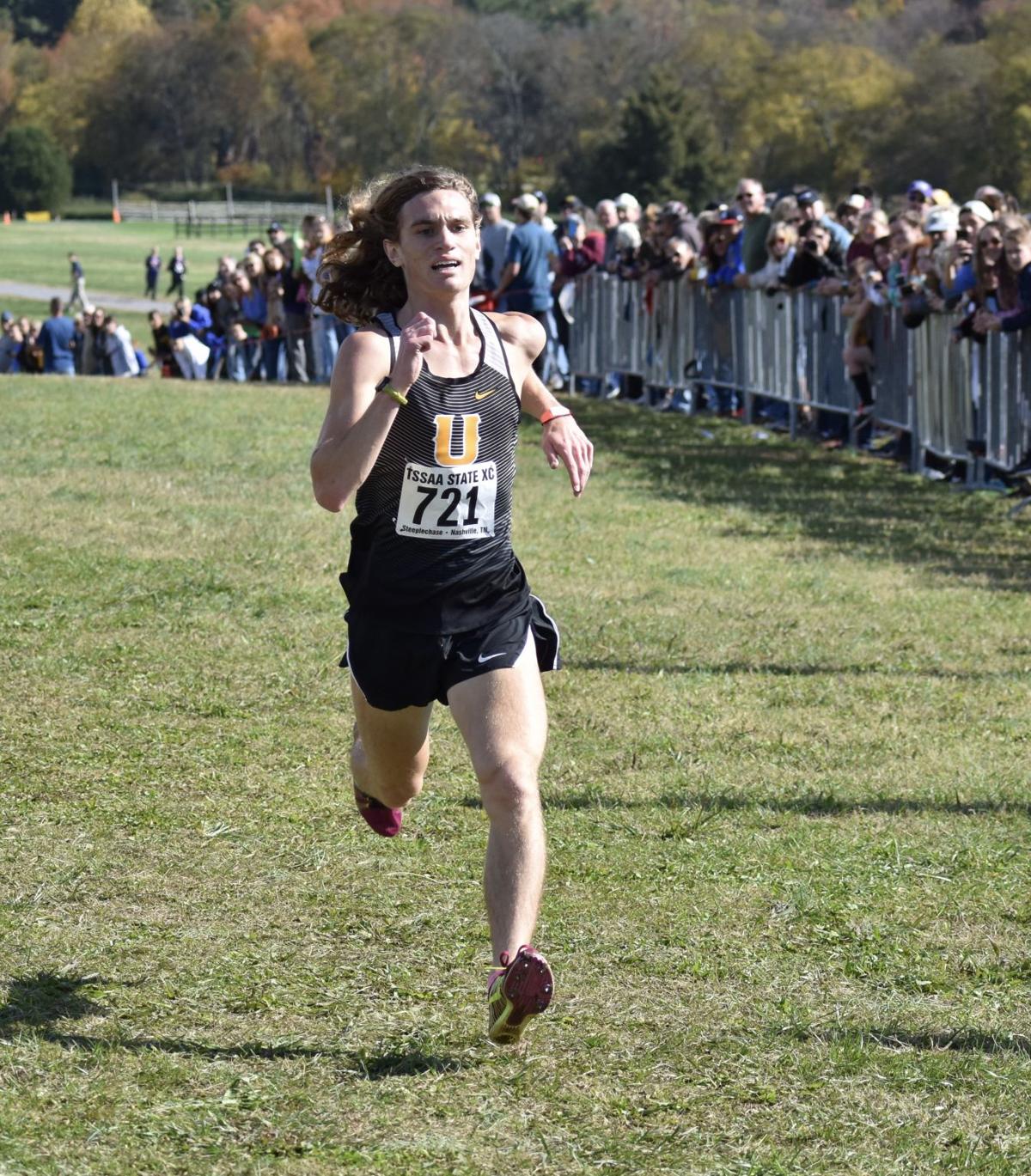 University High’s Porter Bradley is a strong contender in both the boys 1600 and 3200. He was the small schools runner-up at state cross country in the fall. 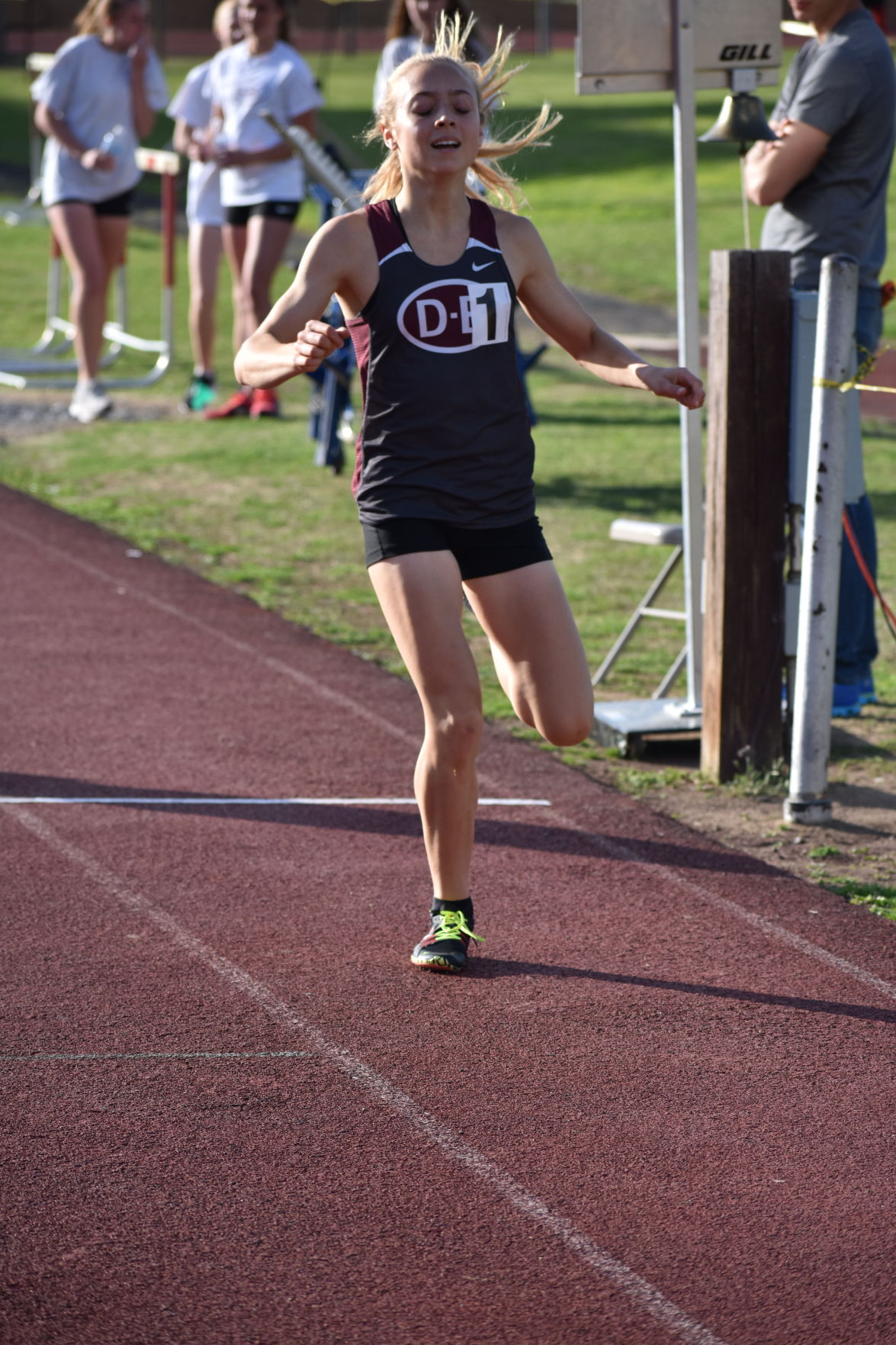 Dobyns-Bennett junior Sasha Neglia leads the field in both the girls 1600 and 3200.

Science Hill sophomore Mary Reed leads the girls sprints in both the 100 and 200 meter dash.

Union’s Justin Barnett headlines a strong field in the boys throwing events. He has a season best of 56-3.5 in the shot put.

University High’s Porter Bradley is a strong contender in both the boys 1600 and 3200. He was the small schools runner-up at state cross country in the fall.

Dobyns-Bennett junior Sasha Neglia leads the field in both the girls 1600 and 3200.

The 41st edition of the Ballad Health/TriCitiesSports.com Relays will commence on Friday afternoon at Dobyns-Bennett. The track & field meet brings together the best competition from Northeast Tennessee and Southwest Virginia.

The meet has a proud tradition of producing fast times and historic performances just before the postseason begins in both states. Action is set to begin at 4 p.m.

The following is a preview of must-watch events based on the entries from Thursday evening.

There is going to be a recurring theme across the girls sprinting events — Patrick Henry has a loaded team.

The squad from Glade Spring, Virginia, has two standout juniors in Maggie Buchanan and Sarah Cornett. The duo ranks inside the top five in the 100- and 200-meter dashes. Cornett is the top seed in the 400.

They also own some of the fastest times in Class 1 and will have a have a good chance at laying some heavy damage at the state meet.

Science Hill’s Mary Reed comes in with the best times in both the 100 and 200 along with second best in the long jump.

Jennifer Cannon’s (Tennessee High) meet record of 12.19 will most likely still be standing.

In the hurdles, Cherokee’s Mataylin Goins has both leading times in the 100 and 300 hurdles. The 300 hurdles should be a relative breeze for Goins, but the 100 hurdles she will probably be challenged by PH’s Ella Maiden.

Both of Jennifer Cannon’s records in the hurdles will still be standing by the end of the meet.

The oldest meet still standing on the girls side is Maria Large’s (Virginia High) 1,600 record of 5:05.8 set in 1981. Dobyns-Bennett junior Sasha Neglia has already run sub-five for the event three times this season.

The 3,200 record was set by Neglia last season at 10:41.20 and will probably still stand as Virginia High’s Kelsey Harrington has the top seed of 10:52.90 coming into Friday.

The 800 could be one of the most exciting races of the day. Katy Neubert comes in with the best time of 2:19.41 and spearheads the field as the only entrant under 2:20. Cherokee’s Harper Russell could make a bid late as she has a tendency of finishing strong.

Dobyns-Bennett comes in with the best times in the 4x200, 4x400 and 4x800. Volunteer has a slight edge in the 4x100 (50.67 to 50.76), so it will be close coming into the anchor legs. Look for Tennessee High to make strong bids as well as the Lady Vikings made some noise last week at the Big Seven conference meet.

The best field events athlete on the girls side will be on full display, competing in three events. That is Sullivan South sophomore Madison Cowan and even though she does not have the top mark in either the long or high jump, she has the potential of winning all three. Her best event is the triple jump as she leads the field by over a foot.

In the throws, PH has the top entrants in the discus throw of Abigail Belcher and Casey Quillen. Belcher threw 126-11 on Wednesday at Virginia High and with another personal best on Friday, she could get close to the meet record of 134-0 set by Elizabethton’s Angie Barker in 1985.

Jasmine Roberts (Elizabethton) is the top entrant in the shot put with a throw of 38-4 and has a slight edge of four inches over Belcher.

The pole vault could be quite interesting as Unicoi County’s Halie Hawkins just cleared 10 feet for the first time this season last week at conference, edging out Daniel Boone’s Caitlin Cutshall. However, Happy Valley’s Natalie Newsome has a victory over both of them this year at DC/TC Relays. Also factoring in will be the constantly improving Sunshine Wheeler of Science Hill, who cleared 9-6 last week and has had a personal best three straight times out.

D-B’s Jeamy Williams is entered in the 200 and has a good chance of breaking T.J. Patton’s (Science Hill) meet record of 21.84 set last spring.

The hurdles are dominated this year by Greeneville’s duo of Brock Moore and Ty Youngblood. Moore has the best time of 15.13 in the 110 hurdles and Youngblood is third at 15.33.

The 300 hurdles look like they will belong to Union’s Avery Jenkins, who comes in with a 41.14 seed time.

The boys distance running is down this season, but there will still be good racing.

University High’s Porter Bradley leads the field in the 3,200 with a 10:15.34 and has been a “big time” racer during his senior year, winning Trailblazer Invitational, Region 1 small schools and runner-up at state in cross country.

Look for Bradley to make a big gamble in the middle of the race as per his style of racing, but it will take an awfully large season best to dip under 10 minutes.

Chuck Brown’s (Sullivan East) unbreakable 800 record of 1:54.0 has withstood the test of time, being set in 1976 at the first edition of the relays. No one on the boys’ side in the 800 meters has a seed time of under two minutes.

If there is one must-see event at the annual meet on Friday, it is the boys shot put. Union’s Justin Barnett has set the bar high with a personal best and school record this spring of 56 feet and 3.5 inches. He has company at the top, though, with Gate City’s Michael Calhoun throwing a 54-6 also this season. There are three throwers over 50 feet this spring entered in the meet, so it will almost assuredly lead to season bests and state qualifiers.

Barnett also leads the discus with a season-best set Wednesday of 158-1, which ranks fourth in all of Virginia. In other words, the boys throwing events this season are loaded.

Jaden Stevenson (Greeneville) leads the field in the long jump with a leap of 22-0.5, but look for John Battle star Reed Samuel to make his mark on the meet. He has by far the best leap in Southwest Virginia this spring and has not been challenged yet. The talented junior has the potential of approaching Gerald Sensabaugh’s (D-B) meet record of 23-0.25 if he has his best day.

D-B teammates Tanner Henry and Samuel Cleek spearhead a strong high jump competition with clearances of 6-4 this season. Gavin Austin (Virginia High) and Malachi Thomas (Chilhowie) also have bests of 6-4 this spring, so tensions will be high strung and it could come down to a jump off.

The triple jump has been lead all season by Science Hill’s Ekeminiabasi Eno-Ekefre and will most likely come out on top again Friday. He leads the field with a leap of 43-4, but is well off the meet record of Jordan Jeffers (D-B) in 46-9.5 in 2016.

Three boys headline the pole vault competition, all coming with bests of better than 13 feet. Jacob Ledford (Science Hill), Devin Mckenna (Boone) and Cleek will make for a close finish.

Probably the most interesting relay race will be the 4x800 between Castlewood and Daniel Boone. Boone made a big statement last week at conference and will have some runners back this week, running 8:45.73. Castlewood brings in a team that has run 8:45.32 this season and finished seventh in Virginia Class 1 cross country state championships. They also won Region 1D with 44 points.