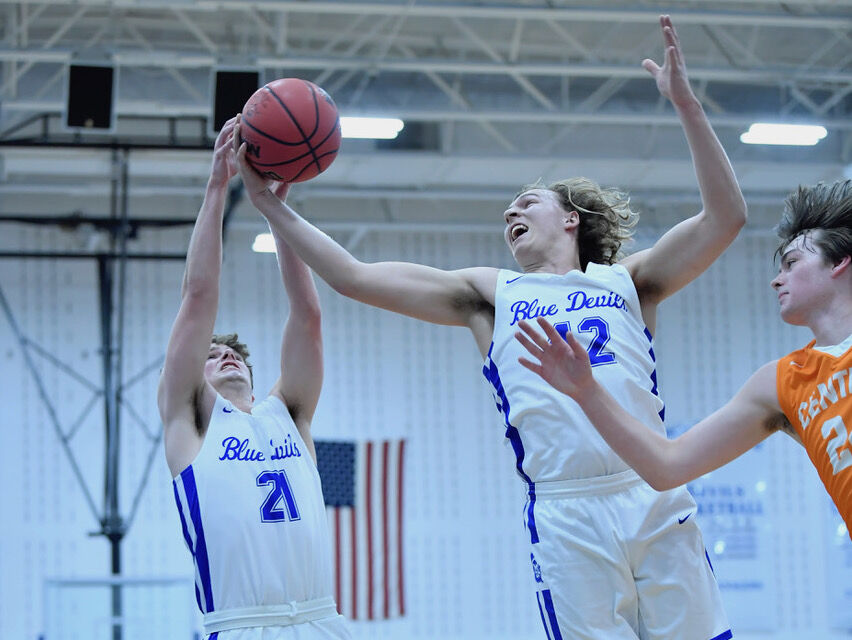 Unicoi County’s Lucas Slagle (42) and Tyler Clouse (21) go after a rebound in Thursday’s District 1-AA tournament game against Sullivan Central. Slagle had 21 points and 20 rebounds to lead the Blue Devils. 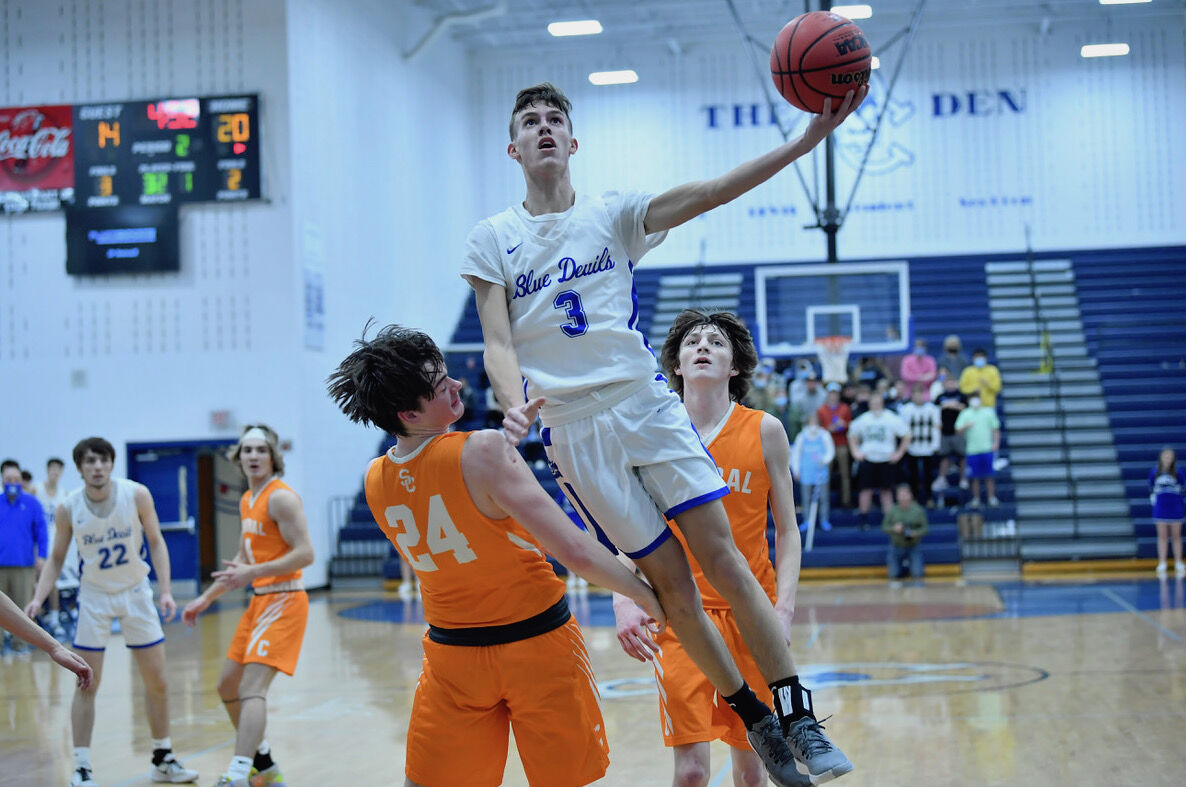 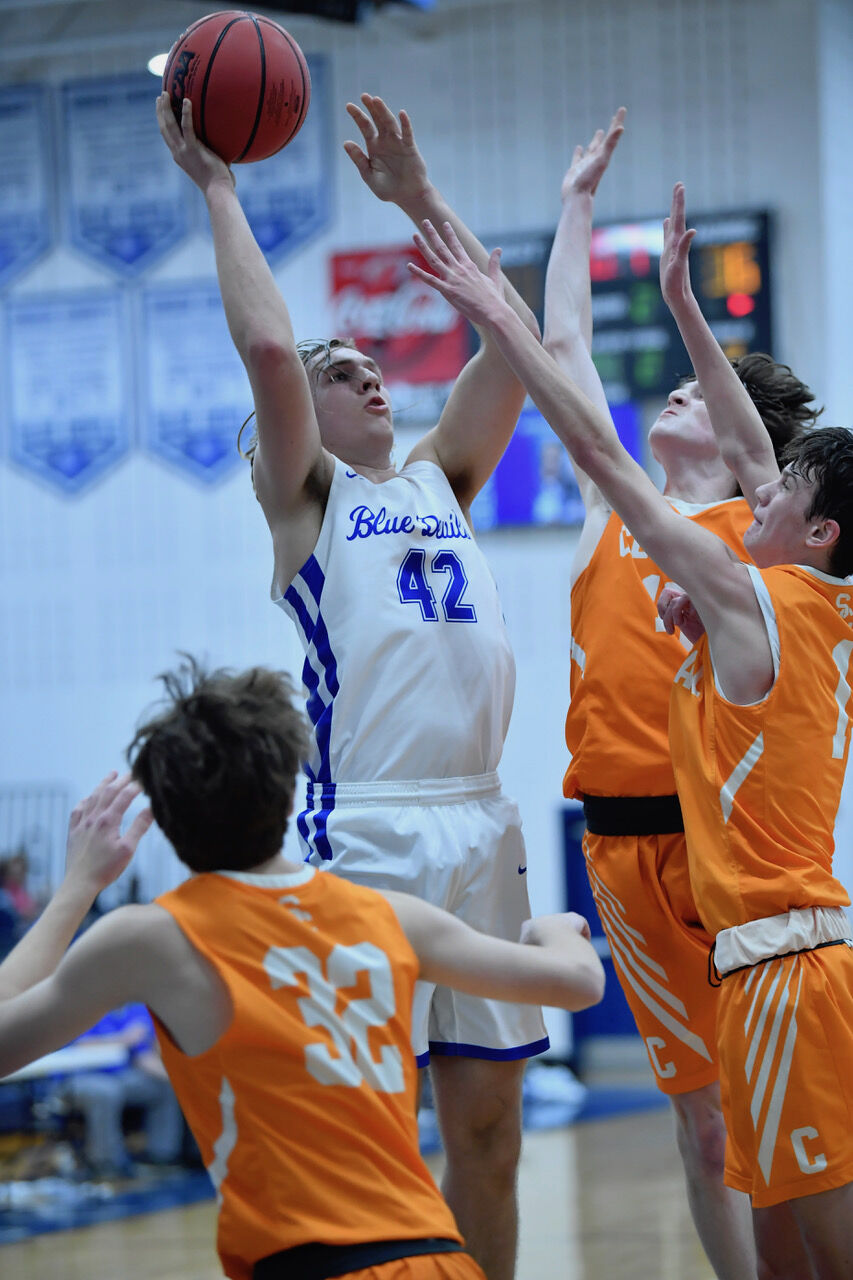 Unicoi County’s Lucas Slagle rises above the Sullivan Central defense to score in Thursday’s District 1-AA tournament game. Slagle had 21 points and 20 rebounds to lead the Blue Devils to an 81-73 victory. Cheryl Gray

Unicoi County’s Lucas Slagle (42) and Tyler Clouse (21) go after a rebound in Thursday’s District 1-AA tournament game against Sullivan Central. Slagle had 21 points and 20 rebounds to lead the Blue Devils.

Unicoi County’s Lucas Slagle rises above the Sullivan Central defense to score in Thursday’s District 1-AA tournament game. Slagle had 21 points and 20 rebounds to lead the Blue Devils to an 81-73 victory. Cheryl Gray

The 6-foot-5 sophomore grabbed 20 rebounds to go along with 21 points in the Blue Devils’ 81-73 victory over the Cougars. Unicoi County (16-12) advanced to face top-seeded Sullivan East in Saturday’s semifinal round.

Slagle said the team had extra motivation with it being an elimination game as well as key players Eli Johnson and Grant Hensley missing the game due to the COVID contract tracing.

“It was good that we get to go on and the kids who are quarantined might get another chance to play,” Slagle said. “We had great energy and had a great game with our seniors showing out. They all contributed big time. Grant and Eli are huge parts of our team and we were going to do all we could to give them another shot.”

Unicoi County coach John Good added, “Lucas can do that every night. The rebounding is crazy because you will see 20 rebounds and you think that he could have gotten 25. He was able to finish tonight. It opens up our offense and makes it run smoother when he’s able to finish. It opens up things for guys to drive the lane and have open shots.”

Down 12-8 late in the first quarter, Unicoi County went on a 14-2 run and never trailed afterwards. Robbie O’Dell hit a 3-point shot from the right arc to give the Devils their first double-digit lead at 27-17. With the trio of Ty Johnson, O’Dell and Slagle pushing forward, Unicoi County took a 15-point lead before back-to-back scores by the Cougars’ Joltin Harrison cut the lead to 38-27 at halftime.

Mason Barcel knocked down a pair of 3-point shots in the third quarter sandwiched around Slagle’s trey to give the Blue Devils a 56-39 lead heading into the final eight minutes.

Central (10-13) rallied, cutting the lead to five points with less than three minutes to go before the Blue Devils responded. Not giving up, the Cougars fought to the end with Ty Barb’s drives to the basket and a one-handed, 3-point shot by Ethan Lane.

Lane finished with a game-high 32 points, 21 of them coming in the fourth quarter. Other double-digit scorers were Barb with 12, Harrison with 11 and Preston Sams with 10. Harrison Sherfey added six points and nine rebounds.

“They just shot the lights out, plain and simple,” Sullivan Central coach Derek McGhee said. “We tried to speed them up, but those guys set up in the corners, shot threes and made them. Every time we made a run, they were right there.”

It was the final game in the rich history of Sullivan Central basketball, which included legendary coach Dickie Warren for whom the Cougars’ gym is named and players like Dan Moody, Steve Crowder, Jared Harrison and Phil Weatherford.

“It’s such a big tradition at our school and it’s terrible it’s over ,” McGhee said. “There have been a lot of good teams. It’s been fun to coach these guys and the other teams the last six years. There’s nothing that makes you feel as bad as this right now. I’m super proud of my kids and we had a good season. We wanted to keep going, but it wasn’t our night.”