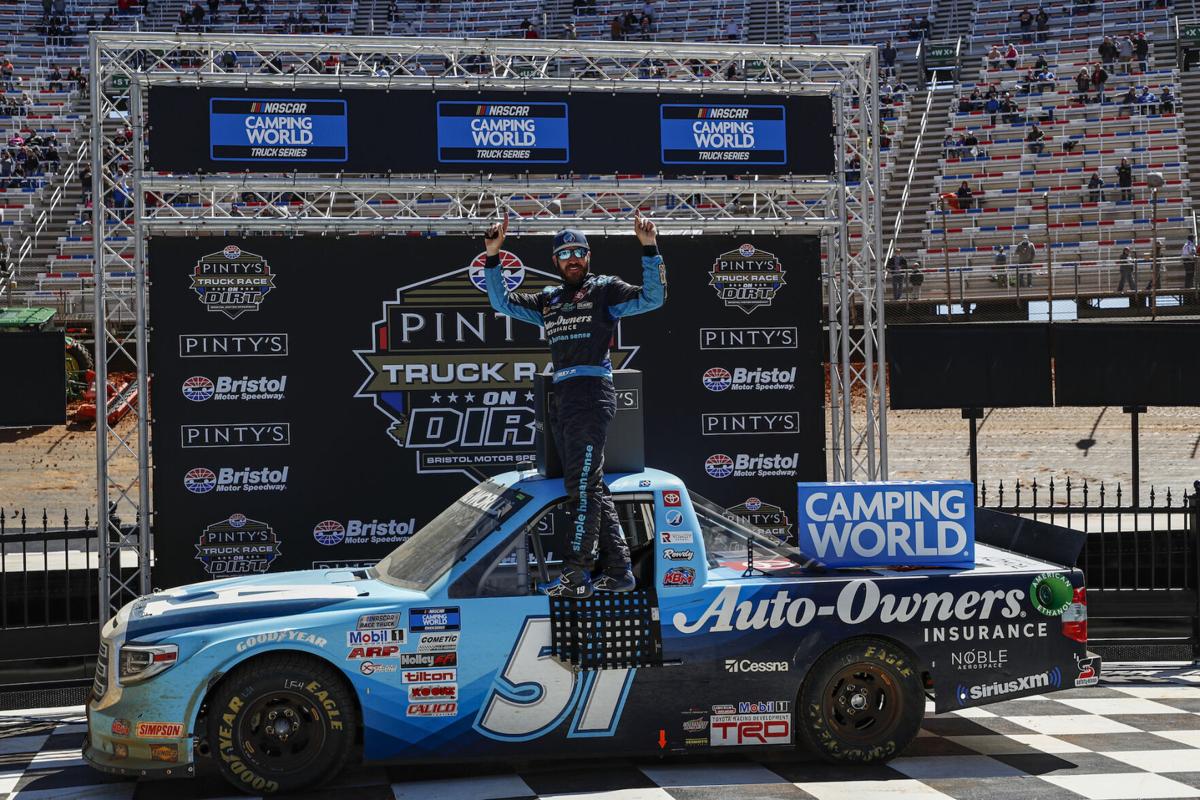 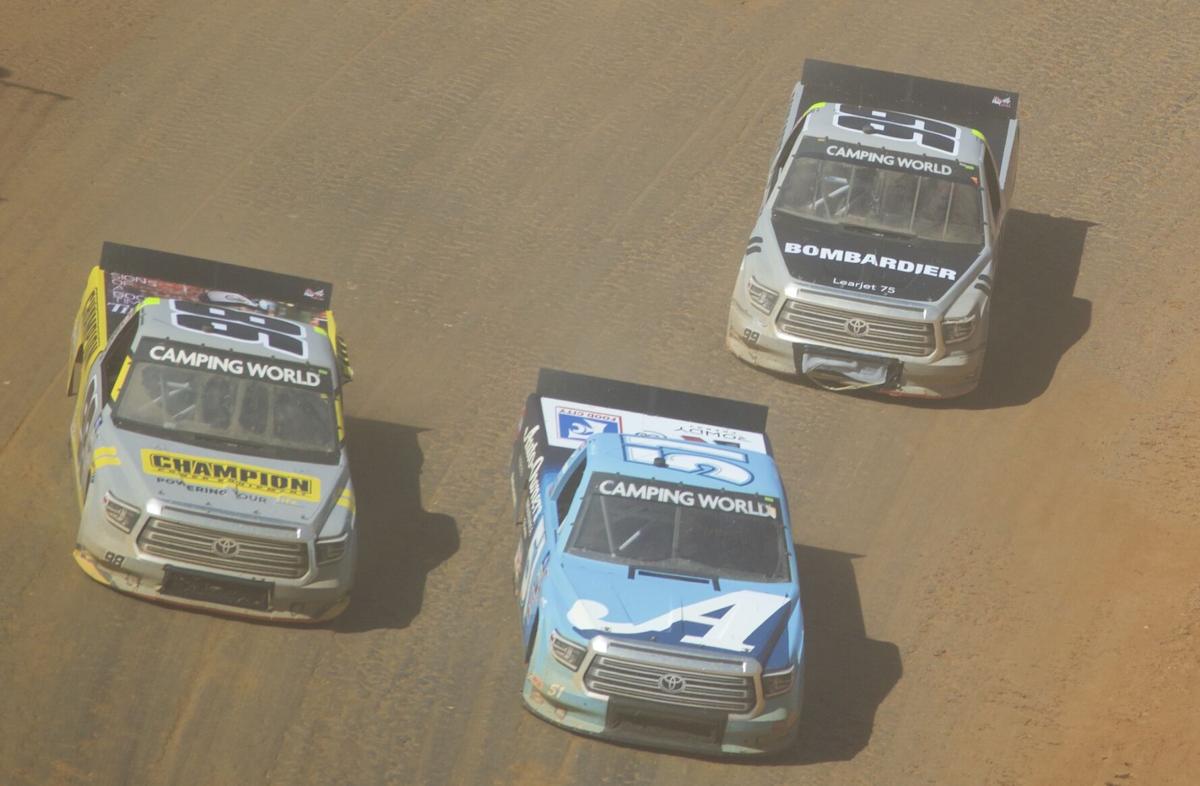 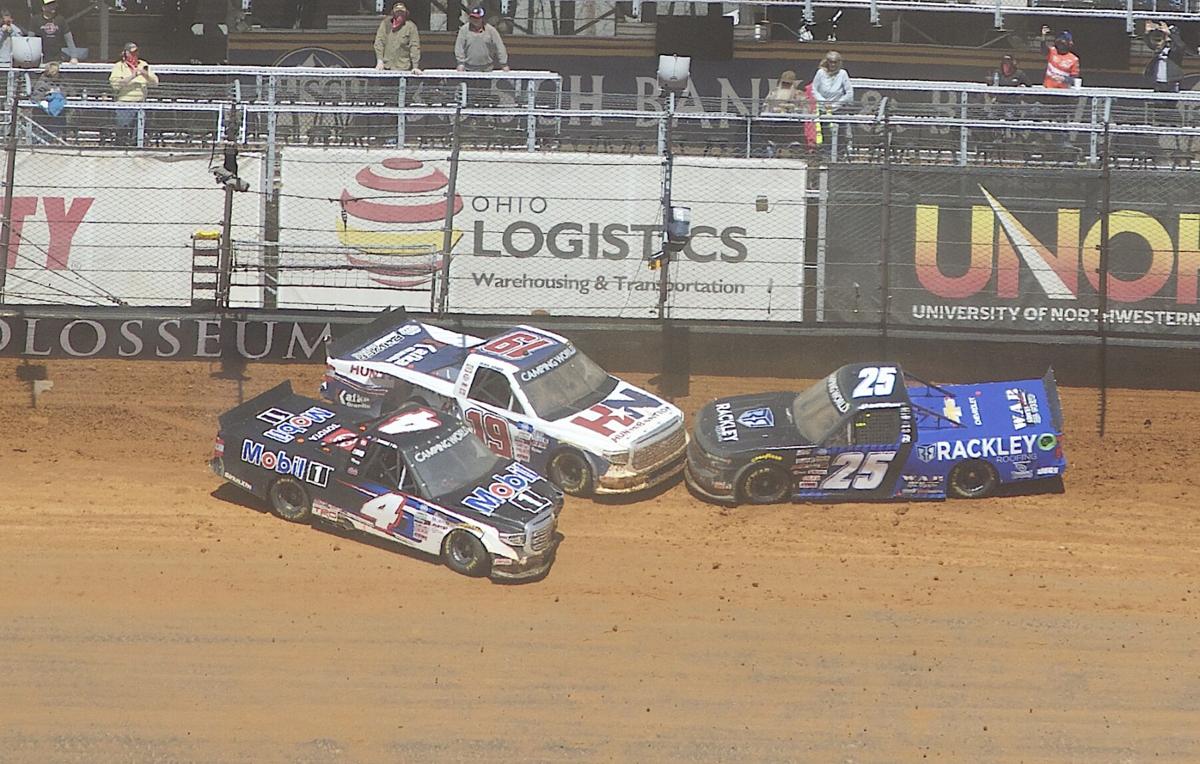 John Hunter Nemechek (4), Derek Kraus (19) and Timothy Peters (25) pile up in a multi-truck accident between turns 1 and 2 during the Pinty’s Truck Race at Bristol Motor Speedway. 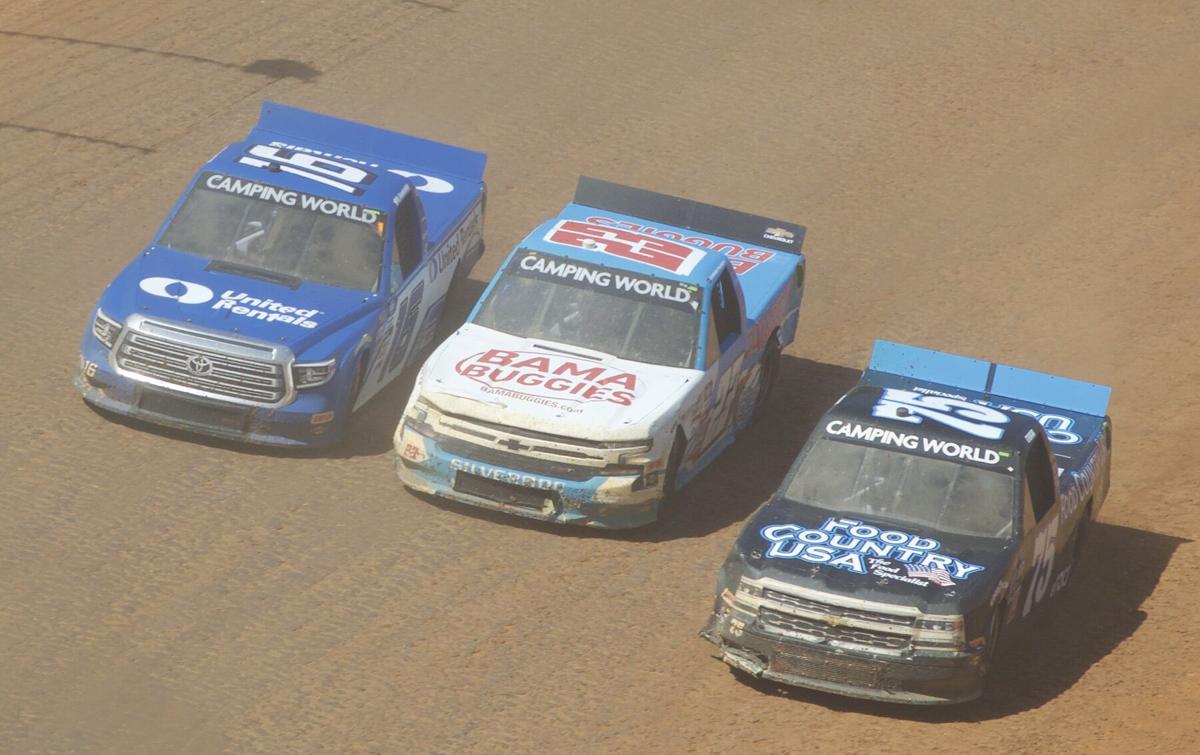 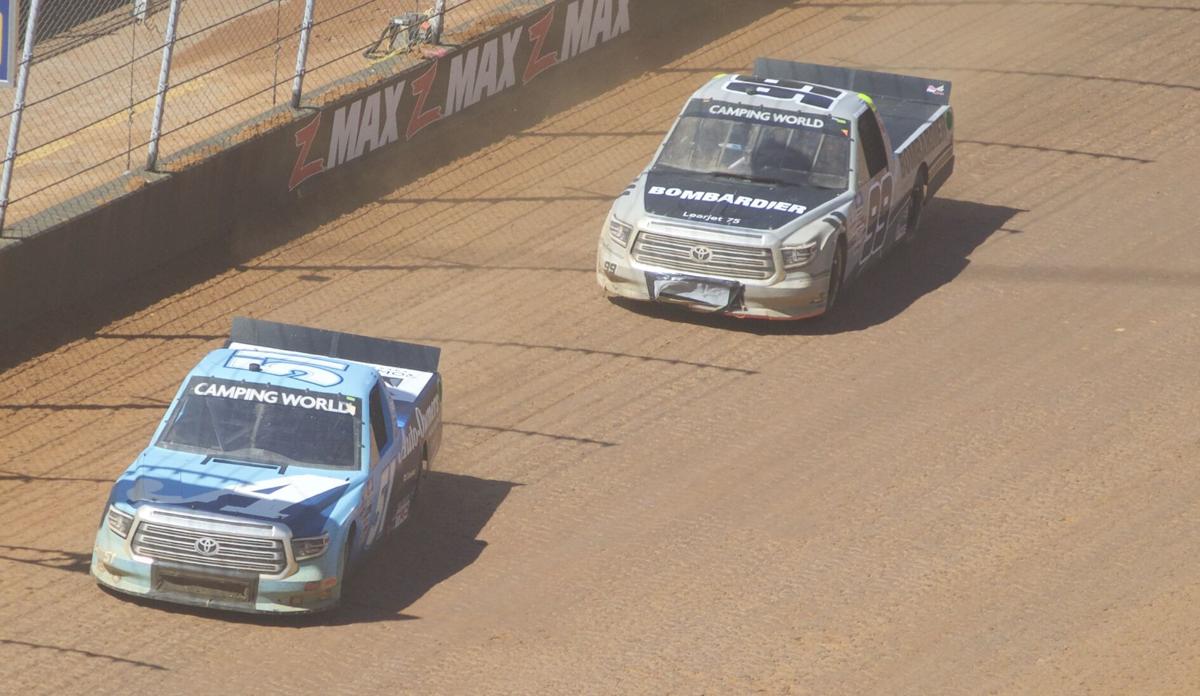 Martin Truex Jr. (51) leads Ben Rhodes (99) down the backstretch during the Pinty's Truck Race on Dirt on Monday at Bristol Motor Speedway.

John Hunter Nemechek (4), Derek Kraus (19) and Timothy Peters (25) pile up in a multi-truck accident between turns 1 and 2 during the Pinty’s Truck Race at Bristol Motor Speedway.

Martin Truex Jr. (51) leads Ben Rhodes (99) down the backstretch during the Pinty's Truck Race on Dirt on Monday at Bristol Motor Speedway.

BRISTOL — Martin Truex Jr. stormed through the field at the Pinty’s Truck Race and left his competitors in his dust Monday at Bristol Motor Speedway.

The 2017 NASCAR Cup Series champion, who has limited experience racing on dirt, surprised himself by dominating the Camping World Truck Series race on the track’s temporary dirt surface. Starting 15th, Truex raced the Kyle Busch Motorsports No. 51 Toyota to the lead at the end of Stage 1.

He led the final two stages, leading 105 of the 150 laps overall and rolling to a 1.149-second win over runner-up Ben Rhodes. Truex, whose only previous win at Bristol came on the concrete in a 2004 Xfinity Series race, surprised himself with the strong performance.

“You always expect to win when you come to the race track, but I’m pleasantly surprised to say the least,” Truex said. “We came here this weekend and I wanted to run this truck just to get some experience and try to help with the Cup car. Who would have thought that I would get my first Truck Series victory on dirt?

“This was a lot of fun. We weren’t supposed to come here and win. That’s really the icing on the cake.”

It was the first career Truck Series win for Truex, who became the 35th driver to win in all three of NASCAR’s top three series.

Rhodes, driving the No. 99 Toyota, missed a shift on the final restart, allowing Truex to scoot away. Although Truex had been dominant all day, Rhodes closed some at the end. He felt the mistake took away a great opportunity to score his first Bristol win.

“I was running him back down the last few laps,” Rhodes said. “I had an issue getting it into fourth gear early on and didn’t think much of it. I just missed the shift. It’s a bummer, the closest I’ve been at winning here. I’m a little aggravated with myself. I really thought I could have brought home a trophy.”

Raphael Lessard and Todd Gilliland, a pair of other racers with limited dirt experience, finished third and fourth, respectively in a Chevrolet and a Ford. Chase Briscoe in a Ford rounded put the top five.

After concerns with Saturday heat races canceled because of a muddy track and torrential rains causing another postponement Sunday, there were picture-perfect conditions for Monday’s race.

It led to an action-packed race with 12 cautions for 56 laps and 11 lead changes.

While no one had the speed to match Truex, the racing with often two and three-wide behind him.

Grant Enfinger in a Ford finished sixth with Zane Smith in a Chevrolet seventh. Parker Kligerman, driving the No. 75 Toyota for the Abingdon-based Henderson Motorsports team, was eighth. Austin Hill and Austin Wayne Self rounded out the top 10.

Six NASCAR Cup Series drivers, including Truex and Briscoe, were in the overall field.

Pre-race favorite Kyle Larson never was a factor during the race. He ran into the back of Mike Marlar’s slowed truck in turn 3 and was collected by Danny Bohn in the No. 30 as his truck spun sideways. He finished 35th in the 40-car field.

“My spotter said they were slow down the backstretch,” Larson said. “I saw everybody down at the bottom so I thought I would go up top and make up some spots. I committed to the top and there was somebody there. Then, I slid down there and the 30 didn’t have anywhere to go.”

Pole sitter John Hunter Nemechek, who was involved in a multi-track accident after contact with Matt Crafton, finished 39th. He remains the series points leader after Bristol, but wasn’t happy with Crafton or Derek Kraus who slid into his wrecked truck seconds after he hit the wall.

“Matt just hooked me. I will keep that one in the memory bank,” Nemechek said. “I don’t know what’s wrong with the 19 (Kraus) and his spotter. I guess they need some glasses.”