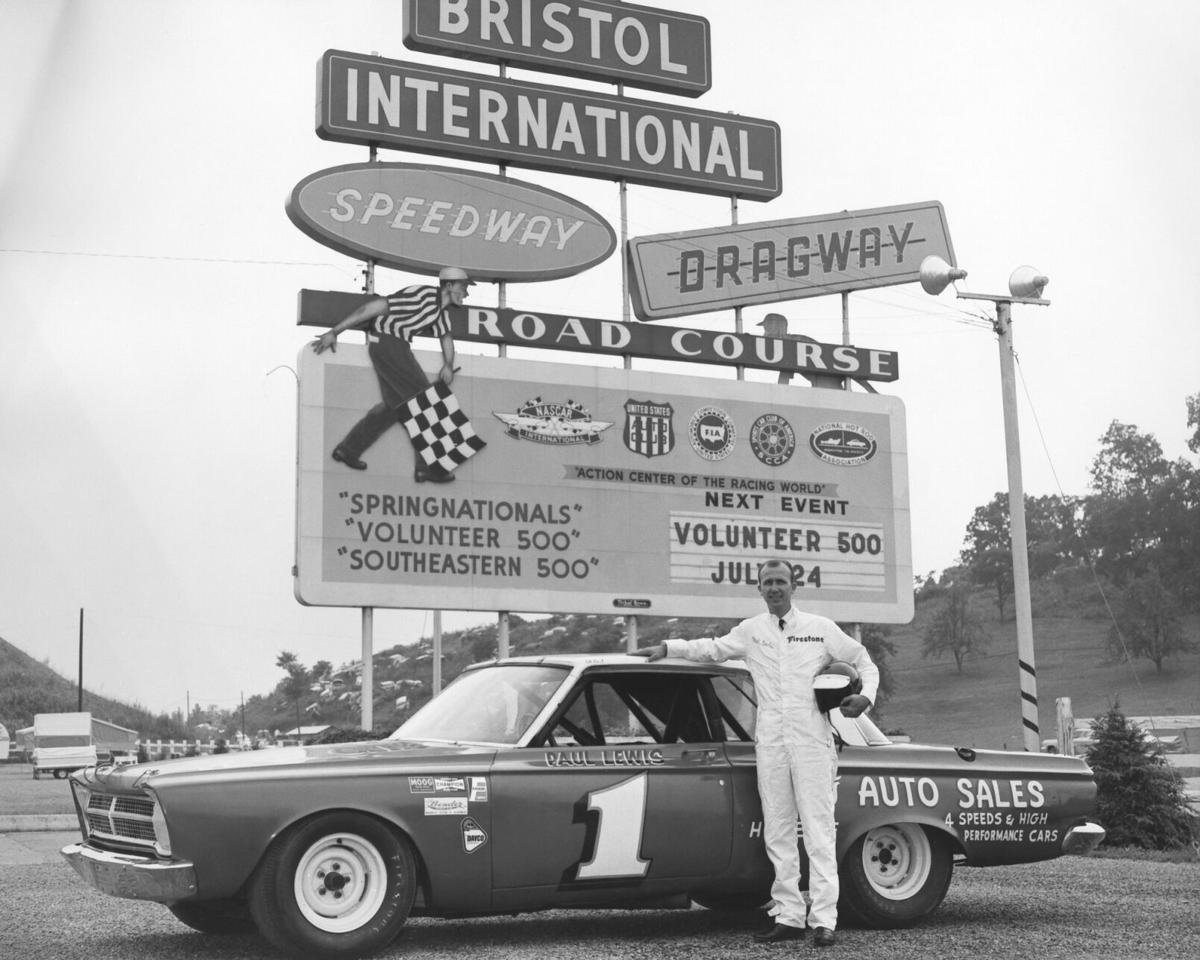 Paul Lewis poses with his No. 1 Plymouth at the Bristol International Speedway marquee in 1966. That same season, he would become the only Tri-Cities driver to officially win a NASCAR Cup Series race. 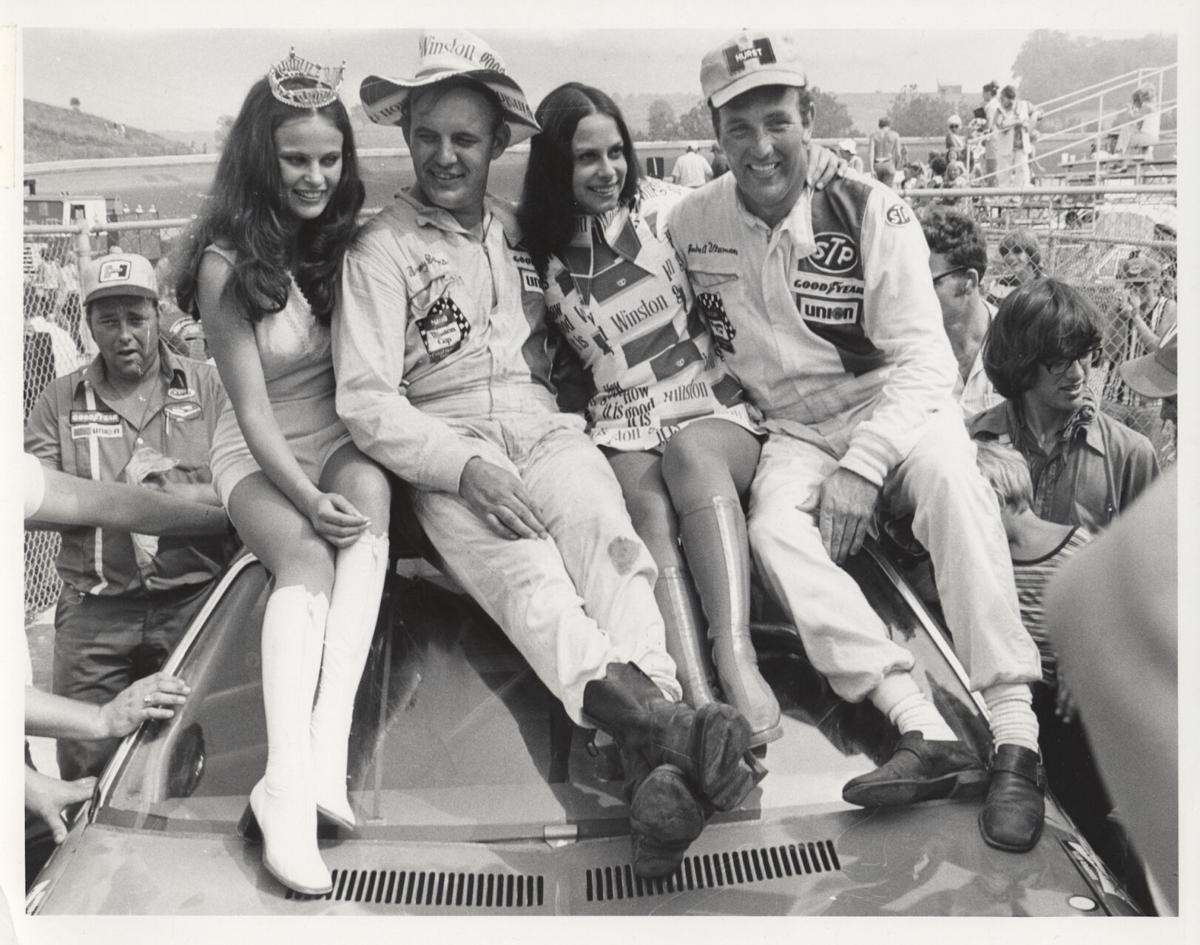 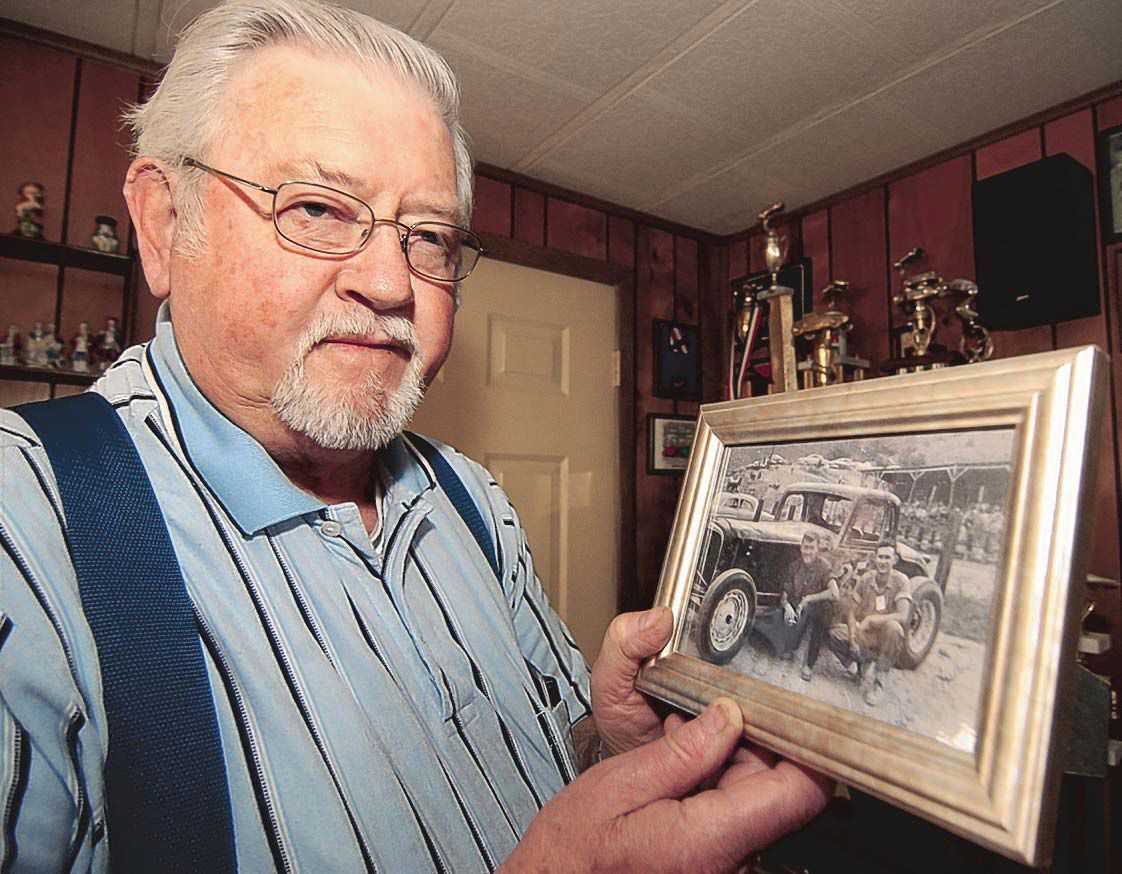 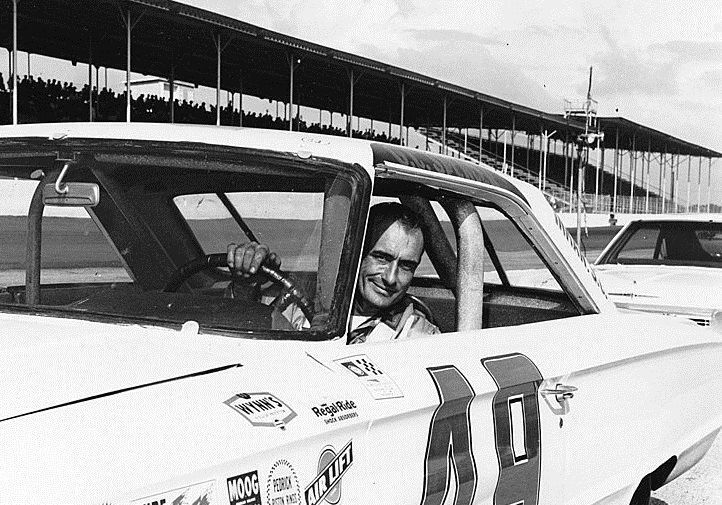 G.C. Spencer sits in a 1964 Ford prior to a race at Darlington Raceway. 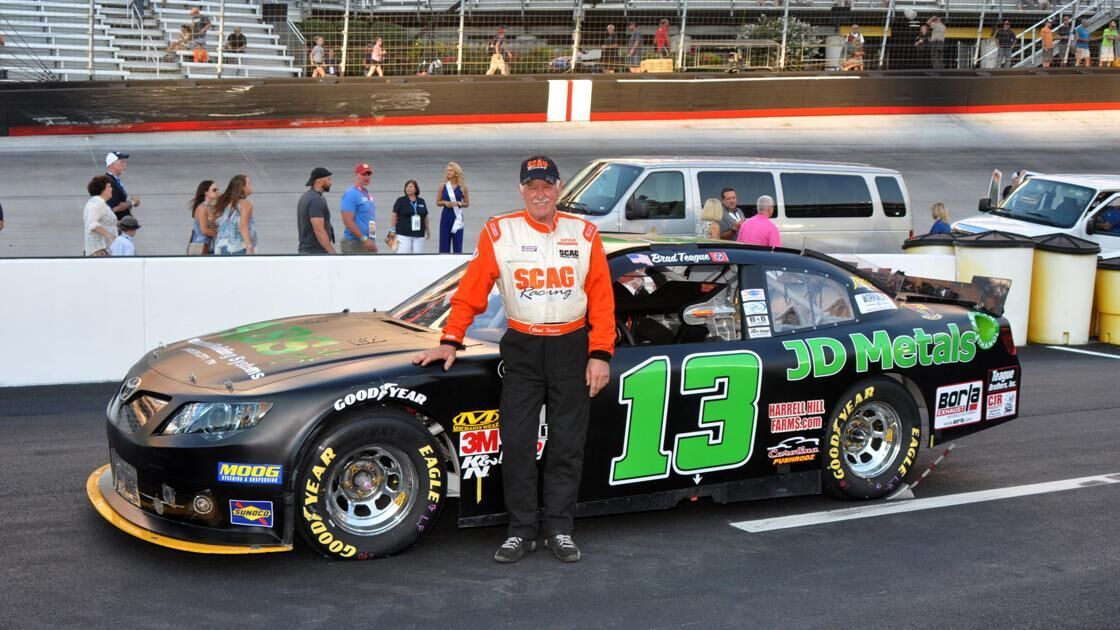 Brad Teague poses in front of the No. 13 Toyota prior to his final NASCAR Xfinity Series start at Bristol Motor Speedway in 2015.

Brownie King races on the sand at Daytona Beach in 1958. The following year, he would compete in the first Daytona 500. 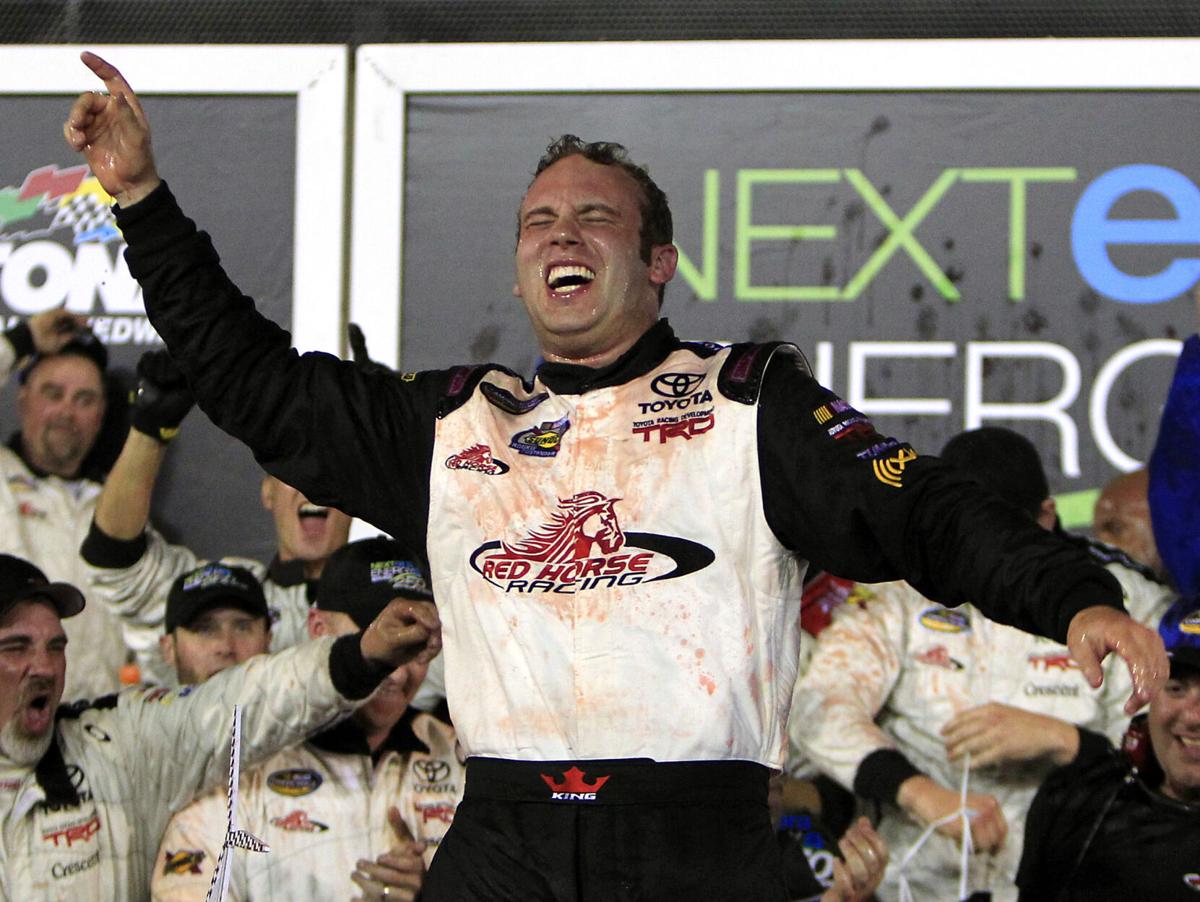 Paul Lewis poses with his No. 1 Plymouth at the Bristol International Speedway marquee in 1966. That same season, he would become the only Tri-Cities driver to officially win a NASCAR Cup Series race.

G.C. Spencer sits in a 1964 Ford prior to a race at Darlington Raceway.

Brad Teague poses in front of the No. 13 Toyota prior to his final NASCAR Xfinity Series start at Bristol Motor Speedway in 2015.

Brownie King races on the sand at Daytona Beach in 1958. The following year, he would compete in the first Daytona 500.

Tri-Cities area racers have made quite the impact on motorsports at the national level.

There have been major victories in NASCAR, NHRA and motocross. For this list, we look at the top 10 moments by local drivers at the NASCAR national level.

It’s not a top-10 drivers list as Sherman Utsman and Bill Morton each had nine top-10 finishes at the Cup level. Sergeant George Green had 29 top-10 finishes in 116 races driving for local car owner Jess Potter. The family tradition continued when Mike Potter made 60 Cup Series starts from 1979-93 and finished second in an ARCA race at Talladega.

Here are the moments which stand out as the top 10 for Tri-Cities drivers. It doesn’t include another major moment as Dr. Don Tarr of Mountain City was the first NASCAR driver to have an in-car radio for an ABC Wide World of Sports broadcast.

In the early 1980’s, the drivers who failed to qualify for the Daytona 500 were able to participate in a consolation race on the Friday before the big race.

Johnson City driver Connie Saylor started 22nd in the 25-car field, but drove the Lain Racing No. 37 Pontiac to the front by the midway point. He led 12 laps to win by 1.5 car lengths over Canadian driver Laurent Rioux.

King’s No. 7 Toyota pulled away from teammate Todd Bodine on the final restart. He held off another teammate Timothy Peters to win the race which ended when Joey Coulter crashed on the final lap.

Johnson City driver Brad Teague led the final 89 laps to win the 1987 Miller 200 for the NASCAR Busch Series at Martinsville. Making the feat more impressive, Teague held off future Hall of Fame driver Dale Jarrett over the final third of the race.

It was the era when the Busch Series were running V-6 engines and Teague was racing a Chevrolet Celebrity. Teague nearly won two years earlier at Darlington, but was passed by Harry Gant, who was relief driving for Jack Ingram, with four laps to go.

King on the beach and the track

Brownie King was one of an elite group of drivers which included such notables as Lee Petty, Buck Baker, Fireball Roberts and Curtis Turner who competed in the last Daytona race on the beach in 1958 and the first Daytona 500 in 1959.

King actually drove a convertible in the first 500 and that season, he finished one spot behind Richard Petty in the NASCAR Convertible point standings. Also of note, Church Hill driver Bill Morton finished 13th in the final race on the beach.

Herman Beam was nicknamed “The Turtle” employing a strategy of rarely abusing his race cars and simply making laps. In an era which mechanical failure was common, the Johnson City racer set a NASCAR record of finishing 84 consecutive races from 1961-63.

In those days with so many cars falling out of races, Beam actually posted three top-five and 57 top-10 finishes in 194 races. He also finished fourth in the final 1959 point standings. His record stood until 2014 when Greg Biffle broke it in a race, which ironically he finished 38 laps down.

Teague is the only driver to make the list twice, thanks to his 1981 Late Model Sportsman season. The Johnson City driver was coming off a huge win in a national invitational event at Kingsport Speedway in 1980 where local drivers bested the out-of-town visitors with Gene Glover and John A. Utsman running second and third.

With that momentum, Teague won the third race of the 1981 season at Richmond and led the points the first half of the year. He was eventually overtaken by Tommy Ellis, but still finished well ahead of third-place Geoff Bodine in the final year before it became the Busch Series.

Originally from Owensboro, Kentucky, G.C. Spencer was a boyhood hero of Darrell Waltrip. He took his famed Flying Saucer race car and moved to South Carolina as his career blossomed. The veteran of 415 NASCAR Cup Series races later relocated to Jonesborough as his wife, Faye, was from Johnson City.

Spencer had one career pole in 1965 at Hickory, N.C., where he finished third behind Junior Johnson and Ned Jarrett and one position ahead of Johnson City driver Paul Lewis. Most famous for driving the No. 49 Dodge at the Cup level, he retired in 1977, but the equipment he sold in 1983 became the basis for Morgan-McClure Motorsports.

Wins that season including a race at his hometown Kingsport Speedway in June where Lindley finished third. Glover won at Virginia tracks — South Boston and Manassas — and capped off the year by beating Jack Ingram in a 250-lap invitational race at Kingsport in October.

2. John A. teams with Benny at Bristol

The most famous moment for any local driver was Bluff City’s John A. Utsman serving as a relief driver for Benny Parsons at the 1973 Volunteer 500. On a hot July day around the Bristol Motor Speedway, the two combined to win the race by seven laps over runner-up L.D. Ottinger.

Parsons drove the first 250 laps of the race, then Utsman took over for 170 laps. Parsons got back in the car the final 80 laps for the only win of his championship season. With the races held in the heat of the day and no power steering on the cars, relief drivers were commonplace at Bristol during this era. Utsman had a reputation as one of the best, scoring eight top-10 finishes in 11 relief appearances. It includes relief driving Janet Guthrie’s car to her career-best sixth-place finish in 1977.

While Utsman’s feat is more well known, Paul Lewis is the only Tri-Cities driver recognized as an official winner at the Cup Series level.

The Johnson City driver won the 1966 Smoky Mountain 200 at Maryville with David Pearson the only other driver on the lead lap at the half-mile dirt track. Herman Beam served as the crew chief and they also posted a second-place finish at Bristol that season.

Running a limited schedule in 1966, Lewis scored 14 top-10 finishes in 21 races. Lewis finished in the top-three nine times in his Cup Series career and he even drove one race for Petty Enterprises and another for Bobby Allison. He set a track qualifying record at Bristol in 1973 that stood a decade, but nothing tops his win at Maryville, the only official victory for a Tri-Cities racer.