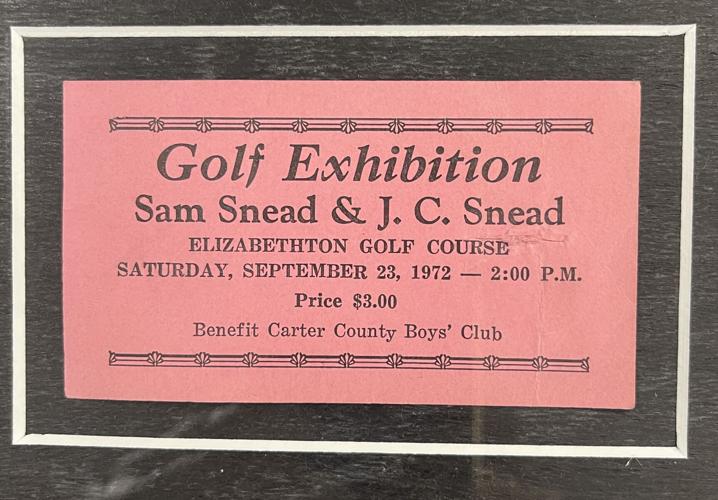 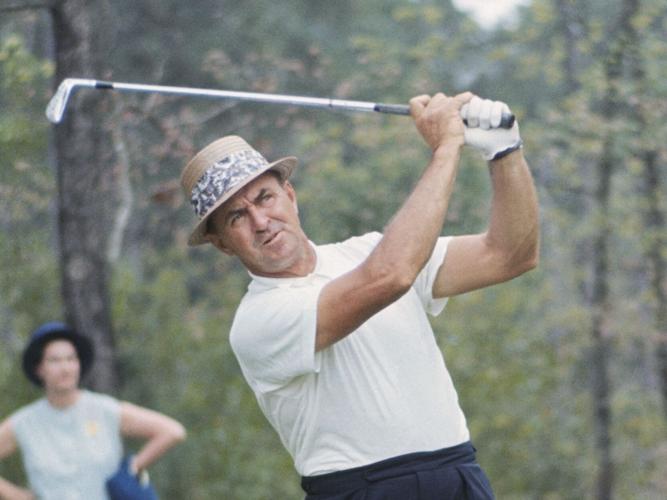 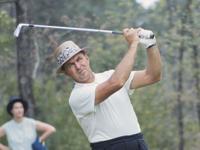 Sam Snead, shown in a file photo, had 82 PGA Tour wins during his career. He played an exhibition match along with his nephew J.C. — an ETSU alum — at Elizabeth- ton Golf Course in 1972. Virginia Golf Hall of Fame 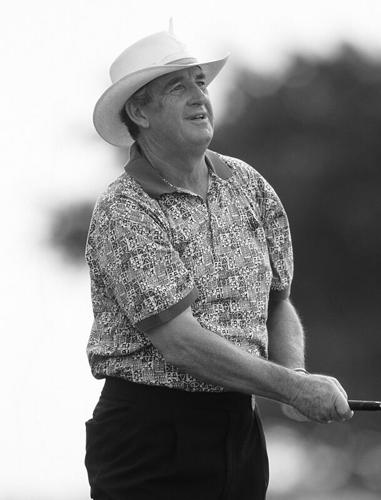 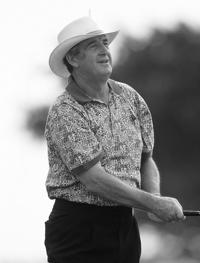 J.C. Snead attended ETSU but didn’t play on the golf team because he was playing minor league baseball at the time. 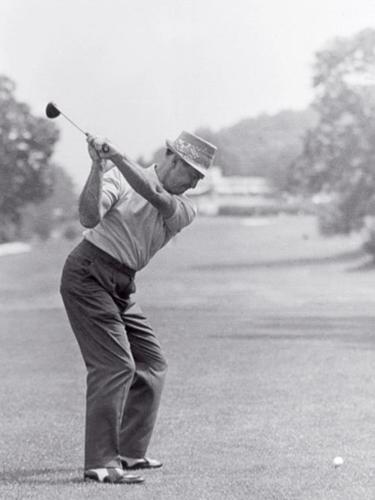 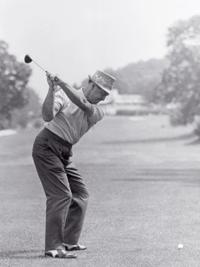 Sam Snead, shown in a file photo, had 82 PGA Tour wins during his career. He played an exhibition match along with his nephew J.C. — an ETSU alum — at Elizabeth- ton Golf Course in 1972. Virginia Golf Hall of Fame

J.C. Snead attended ETSU but didn’t play on the golf team because he was playing minor league baseball at the time.

ELIZABETHTON — The William B. Greene East Tennessee Amateur golf tournament is set for this weekend, but nothing that happens at Elizabethton Golf Course will top a match that was held almost 50 years ago.

Back in 1972, Sam Snead and his nephew J.C. Snead came to town for an exhibition. Sam Snead was 60 years old and still competitive on the PGA Tour, where he won 82 times.

The big match happened shortly after Snead had won one of the six PGA Senior Championships to his credit.

Local bank president Bill Greene, the man after whom this weekend’s tournament is named, took part in the exhibition. Greene was a top amateur in his own right and he teamed with longtime Elizabethton pro Tommy Horton to take on the touring pros.

Snead was already in the area putting on an exhibition at Johnson City Country Club to raise money for Hal Morrison’s East Tennessee State golf team. He asked Greene if there was anywhere else they could play.

The idea came up to do an exhibition at Elizabethton, then Greene’s home course. Tickets cost $3 and the proceeds went to the Carter County Boys’ Club.

J.C. Snead had a connection in the area. He attended ETSU but did not play on the golf team because he was already a professional baseball player in the Washington Senators farm system. Back then, athletes could not be a pro in one sport and an amateur in another.

By the time of the match, J.C. had been a pro for eight years. He went on to an accomplishment-filled career in his own right, with 16 professional wins, including eight on the PGA Tour.

On this day, though, all that mattered was beating the local hotshots. And they did, barely.

“They nipped us, but I think we played pretty good,” Greene said. “I think it was 1-up or 2-up. Of course we had the home-course advantage. We had a good match and there was a big crowd. A bunch of ladies came out. Sam had a lot of fun with the spectators. We just did what you do when you put on an exhibition. You try to beat the other team.”

Horton, who served as Elizabethton’s pro from 1965 to 1981, said he didn’t recall much from the match since it happened so long ago, but Sam Snead’s swing left an impression.

“He played very well,” Horton said. “It was just so smooth and effortless. That impressed me very much. We had a pretty good match with them. We had a good time and there was a good crowd.”

Louis Hopkins, who went on to spend 54 years working at Elizabethton before retiring as the greens superintendent, was a caddie that day and he also recalled being impressed with Snead’s swing.

“He had a completely different swing than what you see today,” Hopkins said. “It was fluid and smooth. He just hit it solid and straight.”

Hopkins was in high school at the time and the caddies drew numbers to see whose bag they would carry. He drew J.C.

“When we were done he gave me a 20-dollar bill and told me to go get a Coca-Cola,” Hopkins said with a laugh.

Just having a golfer of Snead’s stature was a big deal for the small-town course.

“Sam said he had a good time,” Greene said. “He really enjoyed the hospitality of the people and he was very complimentary of the course, especially the greens.”

The Sneads stayed at Greene’s house when they were in the area and it began a friendship that lasted many years. They also did exhibitions at Ridgefields and Grandfather Mountain.

Greene, who said he went on to play with Snead more than 100 times, recalled a humorous incident that happened one of the first times he met ‘Slammin’ Sammy.’ J.C. had invited Greene to play with Sam at the Greenbriar in West Virginia.

“I thought I was kind of a hot shot,” Greene said. “We went out to hit balls and at the practice tee I put my bag on the right side of Sam’s cart. He came over and said ‘Get your (butt) out of my cart.’

“I was kind of scared. He said ‘That’s where Meister sits.’ I thought ‘Who the hell is Meister?’ ”

“That dog jumped up in that seat and never moved until they went near a creek,” Greene said. “Then he went and got golf balls.”

Greene said Snead enjoyed his one day in Elizabethton.

“He said it was the perfect golf course for this community,” Greene said. “He said this is what makes golf so attractive to newcomers. They come out and play a course like this and then they stay with the game and never give it up. He was extremely fond of Elizabethton.”

Joe Avento is the Sports Editor for the Johnson City Press and Kingsport Times News and has covered East Tennessee State University athletics and local golf since 1987.