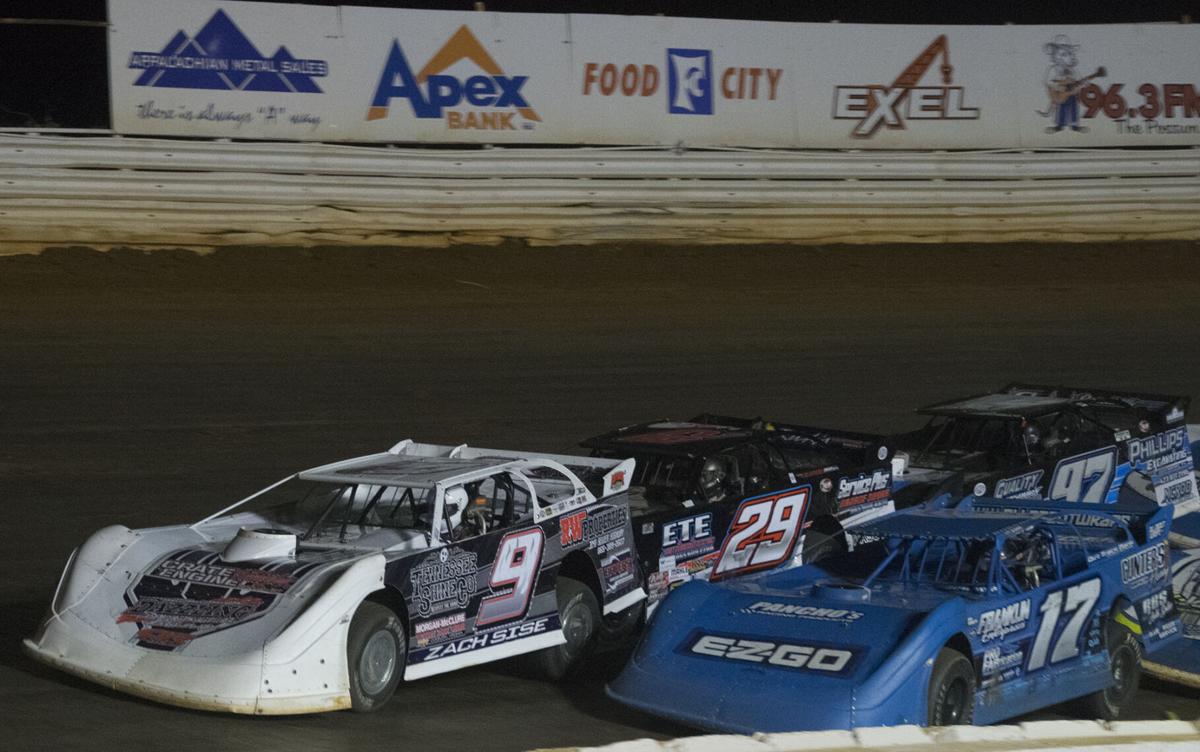 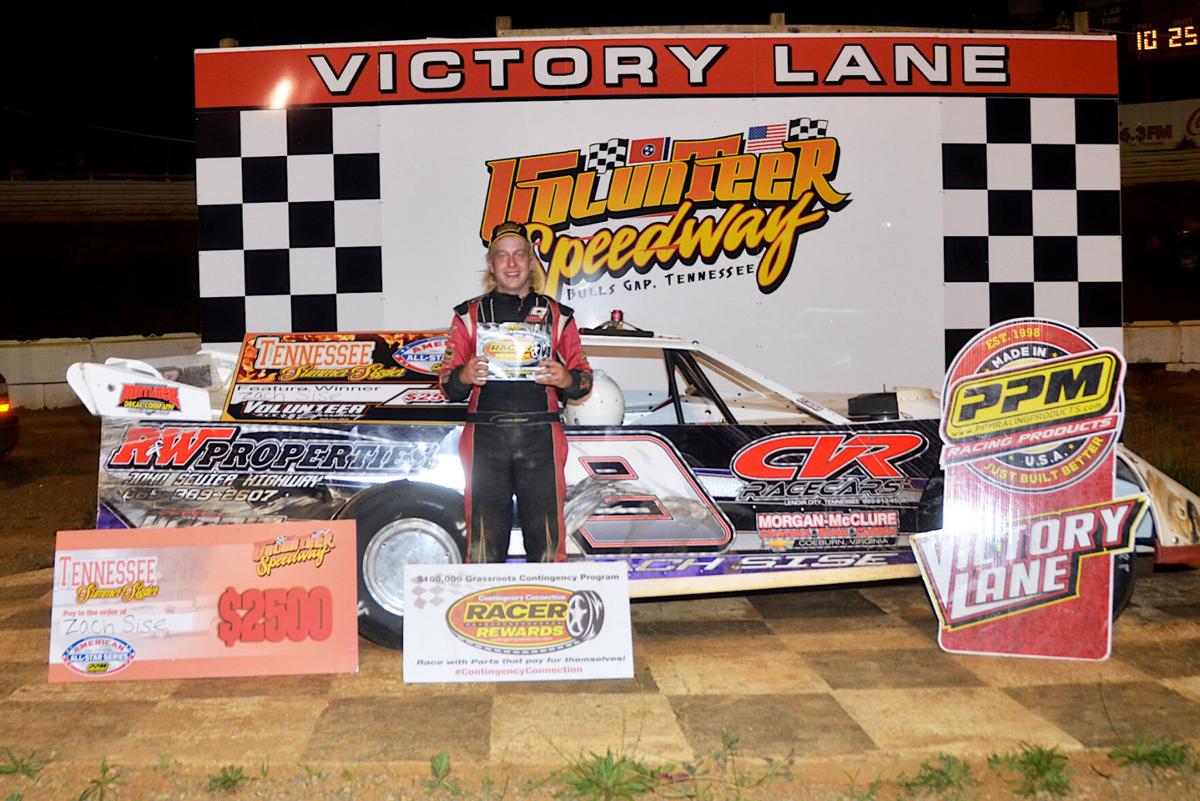 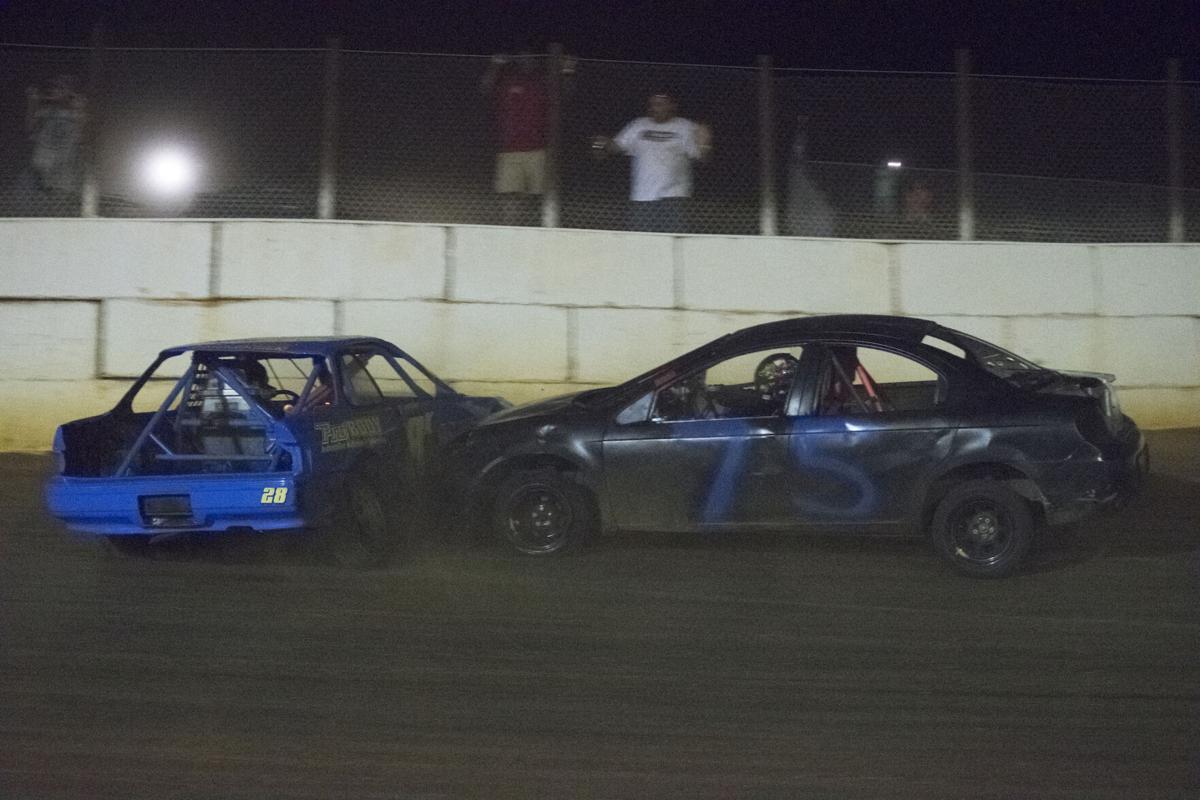 Tyler Woodard (75) slams into leader Jason Ketron (28) after contact between the two in Saturday's Front Wheel Drive feature at Volunteer Speedway. Woodard sustained a shoulder injury and was transported to a local hospital. 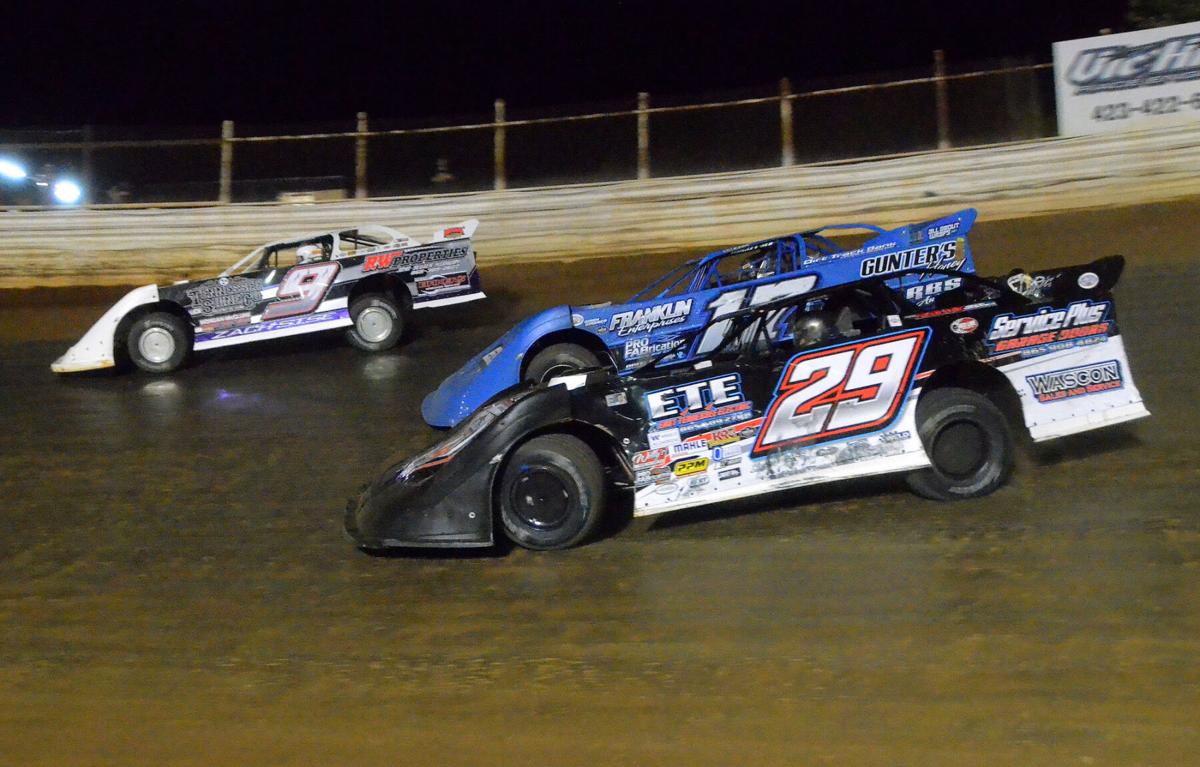 Tyler Woodard (75) slams into leader Jason Ketron (28) after contact between the two in Saturday's Front Wheel Drive feature at Volunteer Speedway. Woodard sustained a shoulder injury and was transported to a local hospital.

The Knoxville driver held off the challenges of Logan Roberson over the 40-lap race to take home the $2,500 winner’s prize.

Sise ran the high line on the 4/10-mile dirt track to keep the momentum in his black and white No. 9 machine. Then, he had to make a daring move through traffic with two laps to go to hold off the blue No. 17 of the persistent Roberson.

“I was able to use the top, but it was sketchy a few laps,” Sise said. “If I would get in the brown (dirt) coming off (turn) two, I was coming close to the wall. But, I had the momentum around the top and kept rolling.

“It got close in lapped traffic, but they went where I hoped they would go and I was able to keep him behind me.”

It was a driver’s race, with multiple accounts of going into turn 3 like hitting a patch of black ice. If they hit it wrong, it killed the momentum coming off the corner.

Roberson, a 21-year-old from Virginia, kept diving to the inside. Normally, it’s the fast way around Volunteer Speedway, particularly in turns 3 and 4. After emerging from battles with pole sitter Rusty Ballenger and Mack McCarter for the second spot, he wasn’t able to get a big enough run off the corner to pull ahead of Sise.

Still, he felt there was a chance for him to win if traffic hadn’t been an issue.

“Those lapped cars played a huge factor. A couple of them went my way, but the last couple of laps, a couple didn’t go my way,” Roberson said. “It’s part of racing. We’re definitely a factor in these longer races. We’re just trying to win and have good points nights.”

It was an eventful night for Johnson City driver Tim Maupin. He started 14th in his white No. 3 machine, went to the back of the pack after a spin and eventually worked his way back up to a 10th-place finish.

“I had a good car, was coming through the field, but spun out on my own,” Maupin said. “It wasn’t anybody’s fault, but my own. I could have leaned against the guy in front of me, but I spun it out. I went to the back, dodged a few wrecks and came up through the field a bit.”

Wayne Rader of Parrottsville continues to dominate the Sportsman Late Model ranks with his black No. 01 Pontiac Trans-Am designed machine.

Rader won his third straight race, pedaling away from Knoxville racer Addison Cardwell, who passed his brother, Hayden, for second place. Hayden Cardwell slammed the outside wall in turn 3, ending his chance for a win. Josh Driskill finished third with James Parrott and Kip Sawyer in the other top-five positions.

Logan Hickey of Morristown and Josh Henry were the class of the field in the Street Stock feature, racing to a 1-2 finish. Colby Long, Wendell Williams and Sam Ferguson took the third through fifth positions.

Kingsport driver Jason Ketron had a huge lead with two laps to go before tangling with the lapped car of Tyler Woodard coming off turn two. Ketron slammed the outside wall, while Woodard’s car came to rest at the end of the backstretch.

The race was red-flagged and then called altogether. Knoxville driver Ray Wyatt took the win ahead of Brandon Crawford and Amy Williams. Woodard was later transported to a local hospital because of shoulder pain.