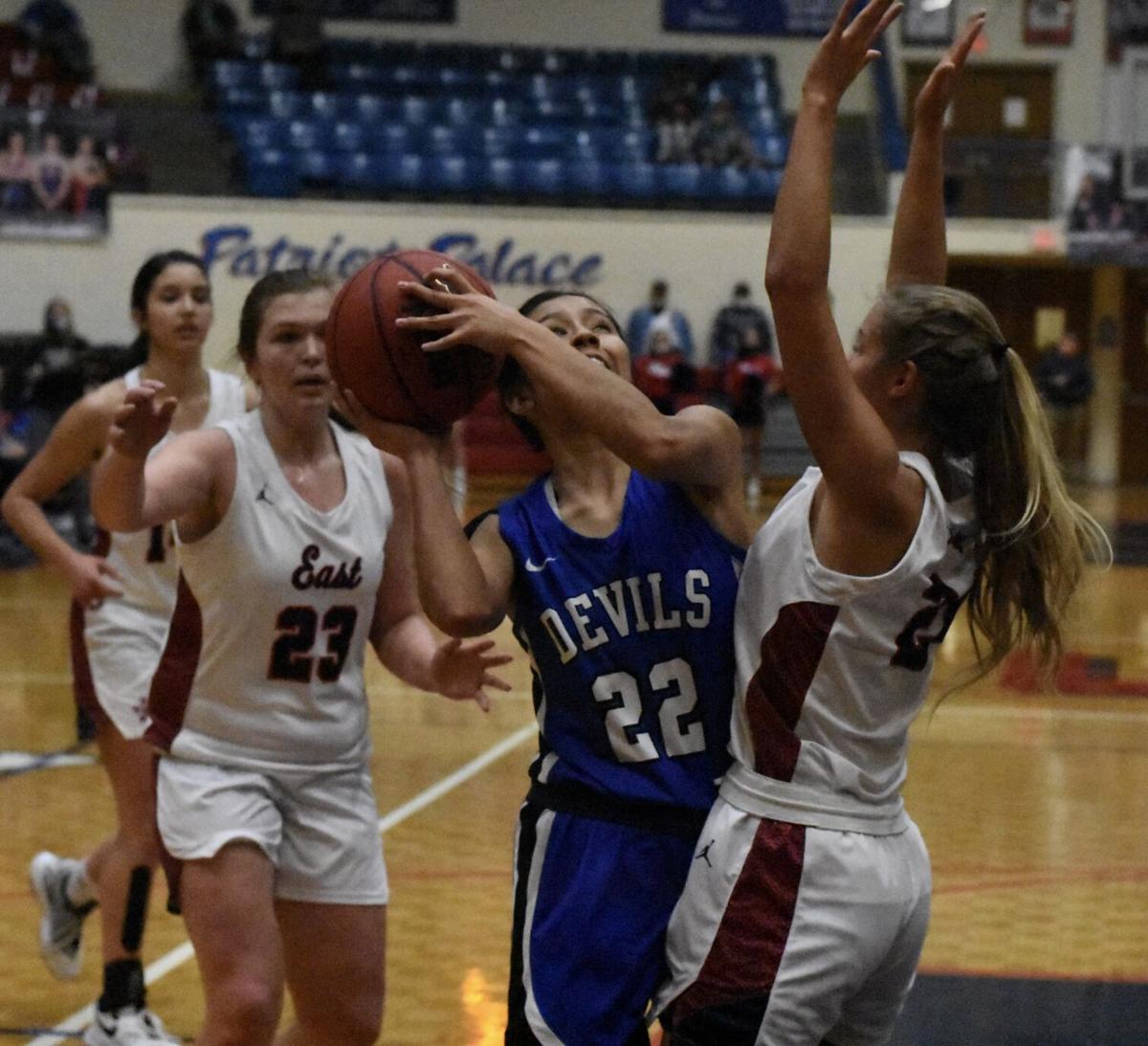 Unicoi County’s Tenley Holt (22) goes up against a Sullivan East defender for a tough shot. The Lady Patriots held Unicoi to 12 points in the second half en route to a 62-47 victory in the District 1-AA semifinals. 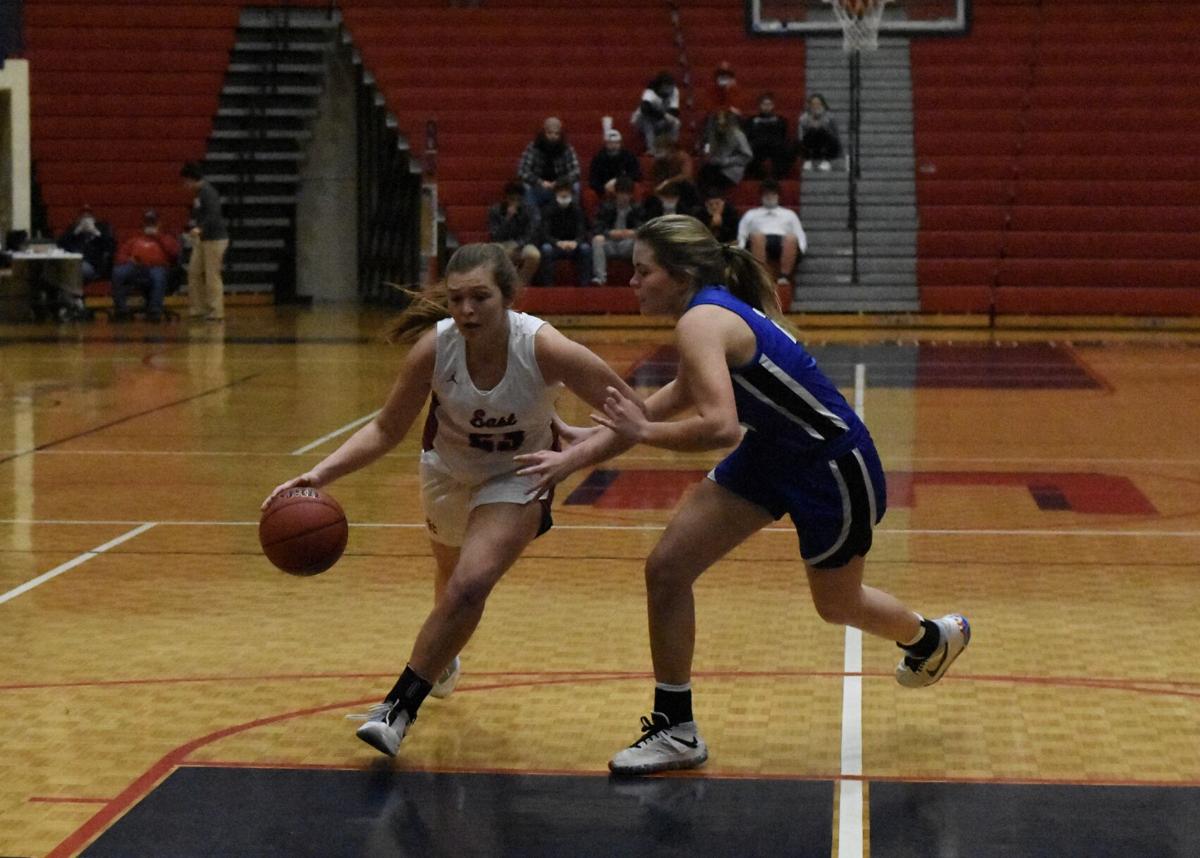 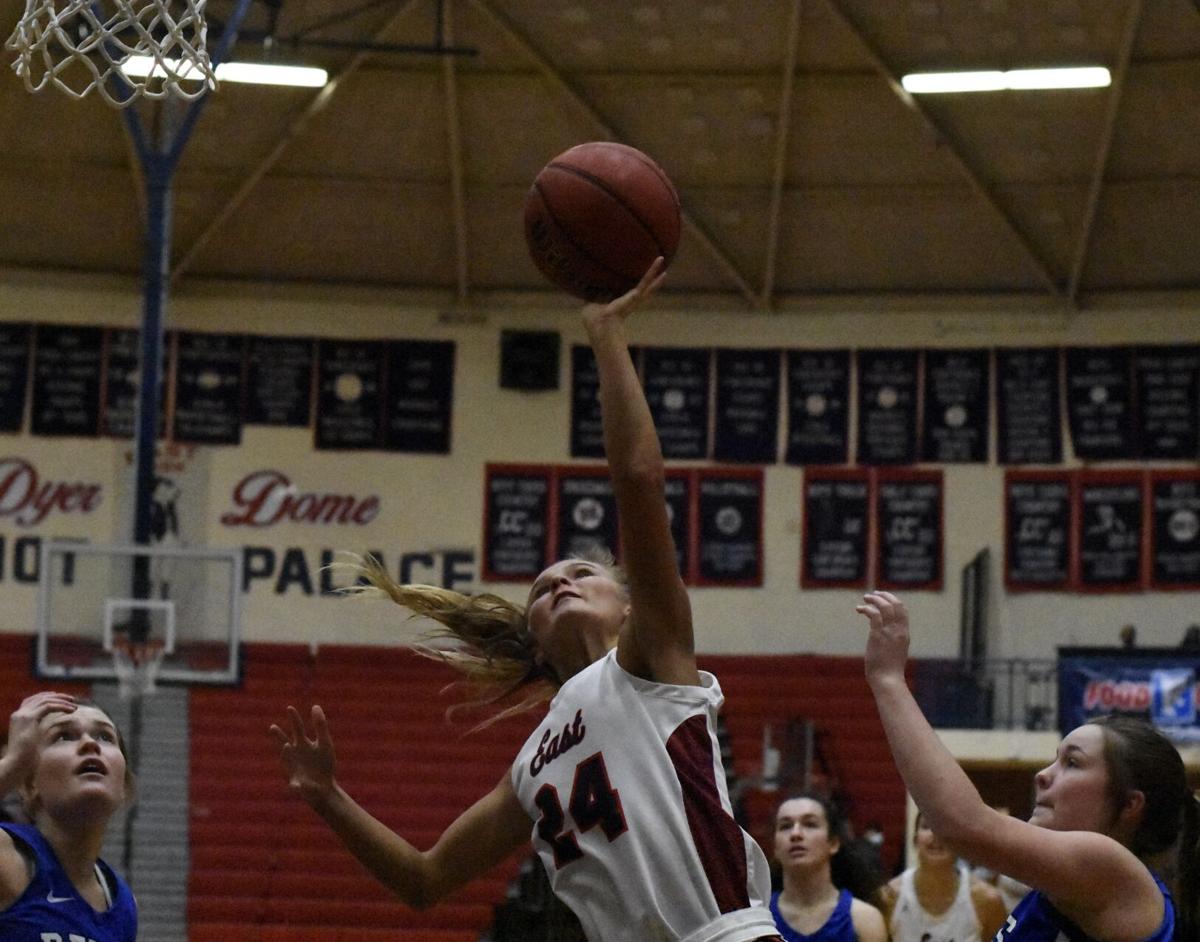 Sullivan East’s Hayley Grubb (34) puts up a shot underneath the basket.

Unicoi County’s Tenley Holt (22) goes up against a Sullivan East defender for a tough shot. The Lady Patriots held Unicoi to 12 points in the second half en route to a 62-47 victory in the District 1-AA semifinals.

Sullivan East’s Hayley Grubb (34) puts up a shot underneath the basket.

And boy did they ever answer the call.

The Lady Patriots clamped down and held Unicoi County to 12 second-half points in pulling away for a 62-47 win in Friday’s District 1-AA semifinal inside the Dyer Dome.

“We played horrible defense in the first half and we gave them shots, especially in the last three minutes,” Aubrey said. “We had them down 37-27 and we let them shoot to get back in it at the end of the quarter.

“I really challenged them in the locker room at half and we gave up 12 points in the second half.”

The Lady Patriots move into Monday’s final against Sullivan Central, which beat Elizabethton in the other game on Friday with a buzzer-beater from Bre Yarber.

Unicoi County will play at Elizabethton on Monday in the consolation game.

East sophomore Jenna Hare led all scorers with 23 points on 8-of-16 shooting and netting all four of her free throws.

The offensive onslaught for East (22-4) was prevalent again as Hayley Grubb netted 14 while Emma Aubrey and Riley Nelson each finished with 10.

East had only five turnovers the entire game and shot 23-for-58 from the field.

Coach Aubrey, however, said that his team’s hustle in the second half on defensive rebounds was what won the game.

“I feel like we did a really nice job on the defensive glass,” Aubrey said. “When we play defense like that, we’re hard to beat. We have to play defense all 32 minutes, not 28.”

“I don’t think we played bad, we just didn’t box out,” Unicoi coach Kerri King said. “We needed to control the boards or at least control them on the boards. We never did that from the start.

“We can defend them as good as we want, but if we give up more than one shot, all of that is vain.”

Tenley Holt started off hot, netting 14 in the first quarter and finished with a team-high 21. Unicoi’s Caroline Podvin had 13 on 5-for-13 shooting.

The Lady Blue Devils shot 18 of 44 with 15 turnovers on the evening.

“East has a lot of weapons,” King said. “They’re really good. I don’t know how we match up with them because they’re really long and we’re not.”