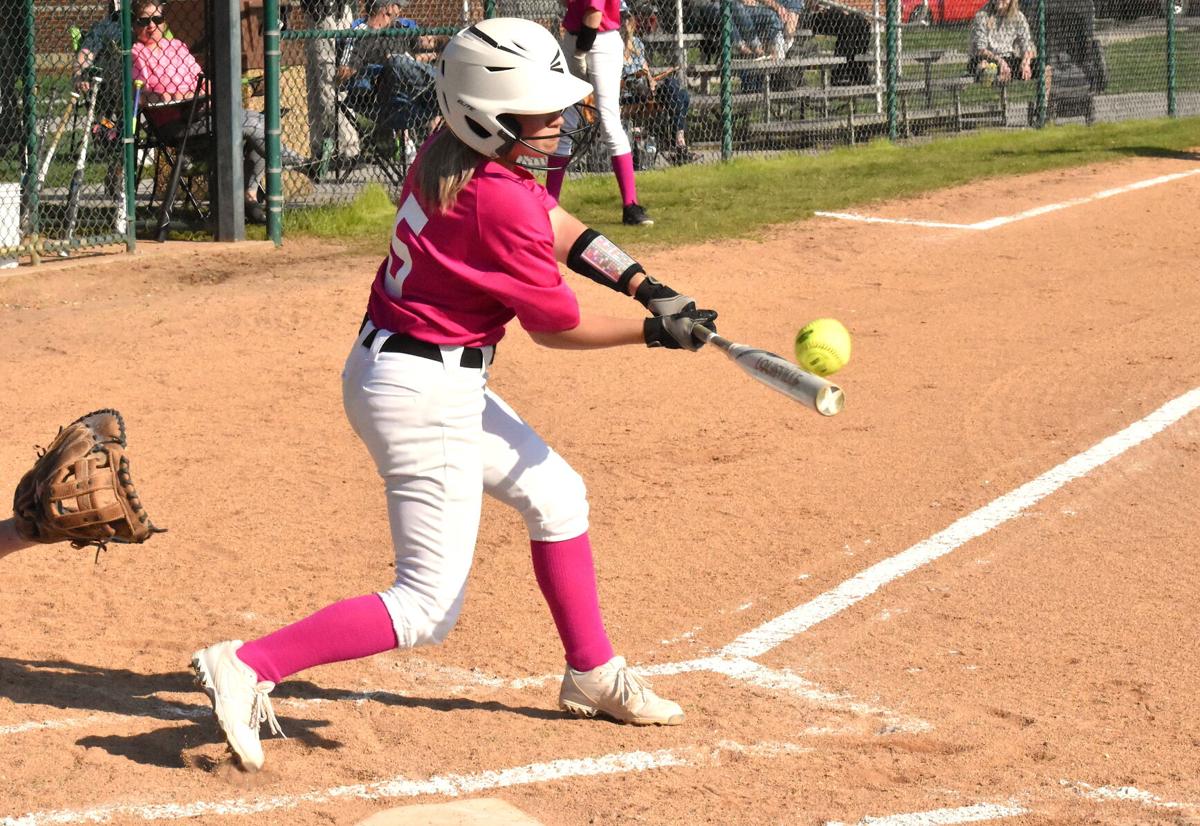 Sullivan North's Kaitlyn Lemmons makes solid contact against University High on Tuesday at Indian Trail. Lemmons was retired on the outfield line out. 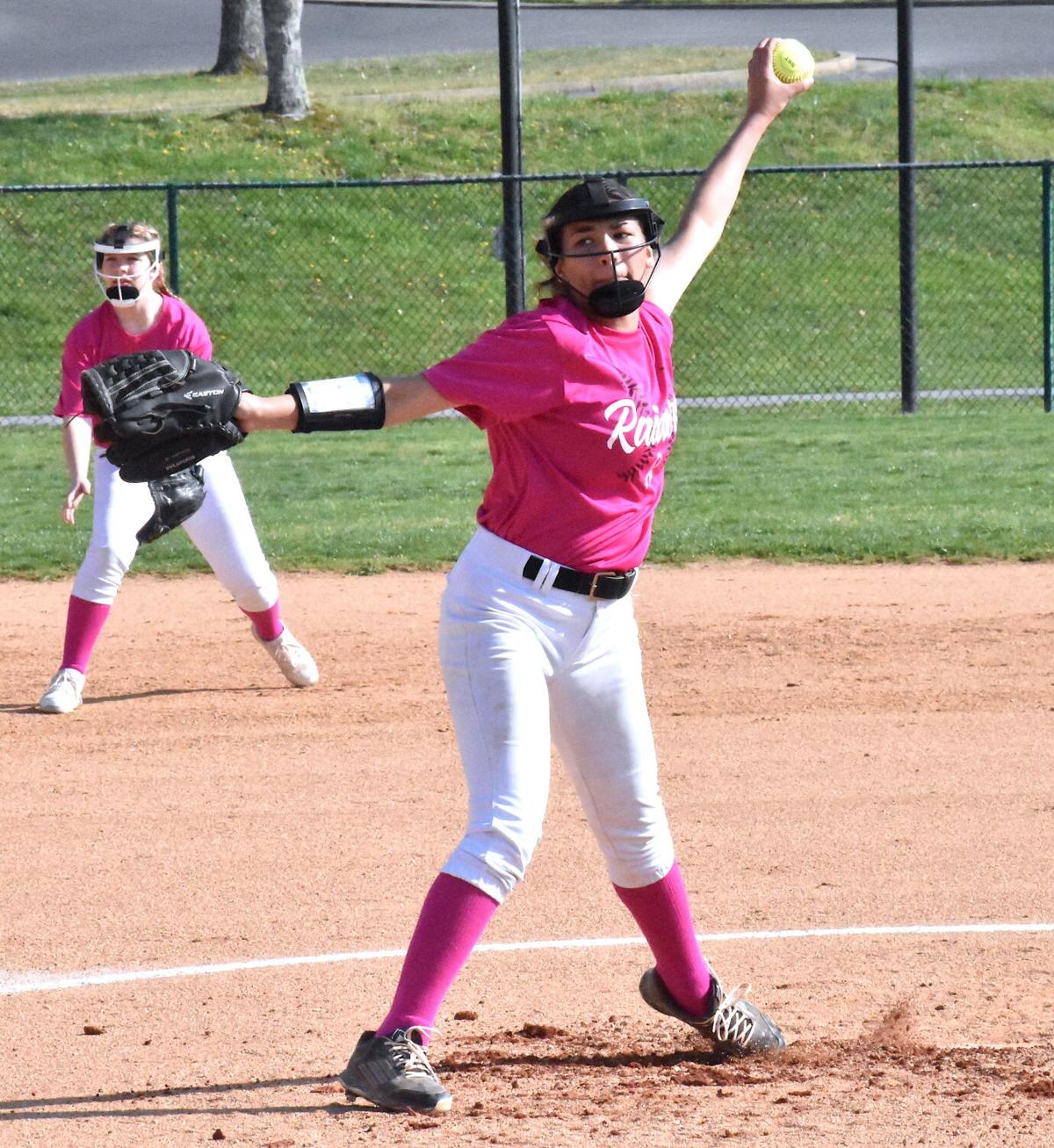 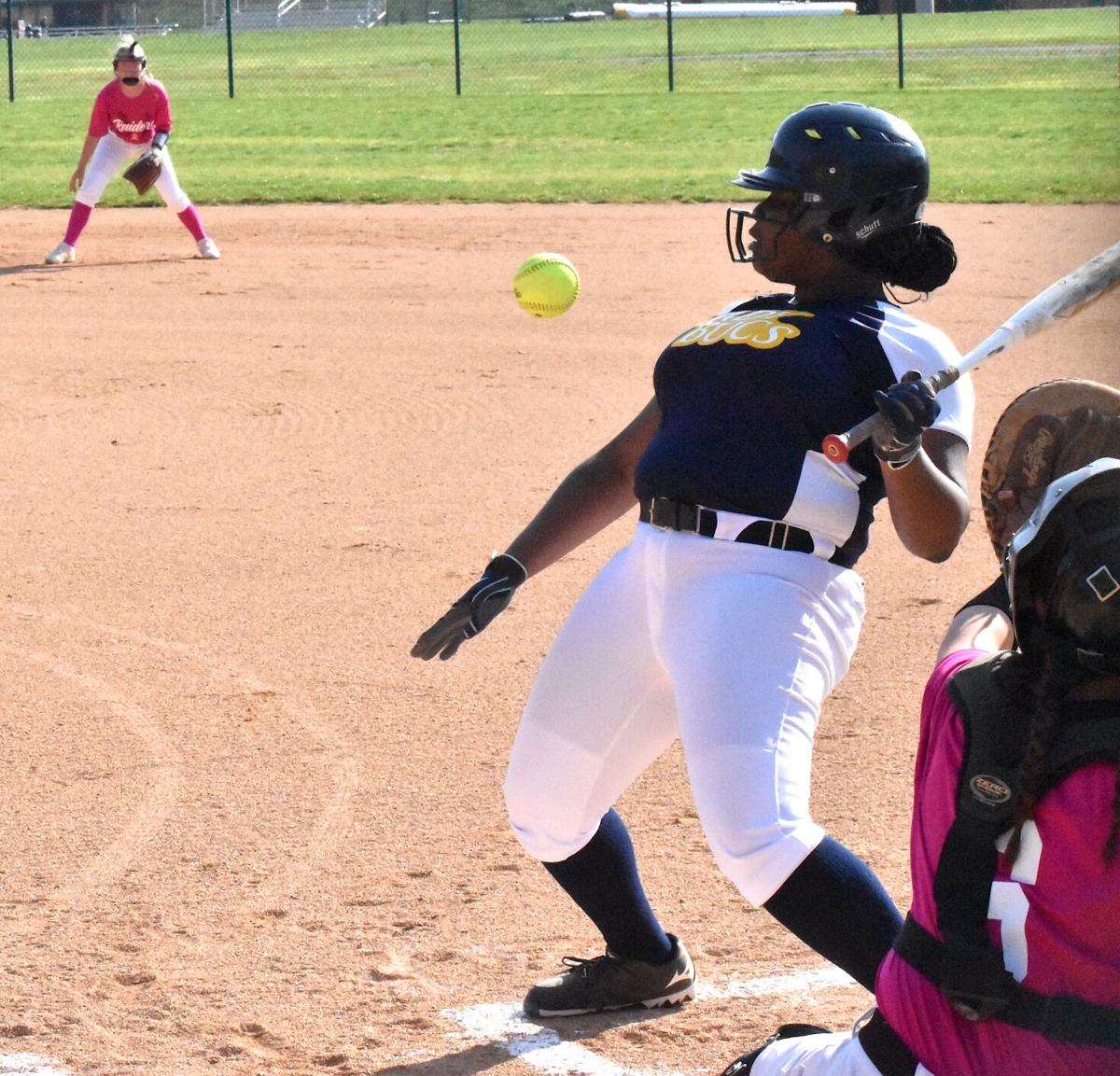 University High's Cyndia Dobbins backs away from an inside pitch. 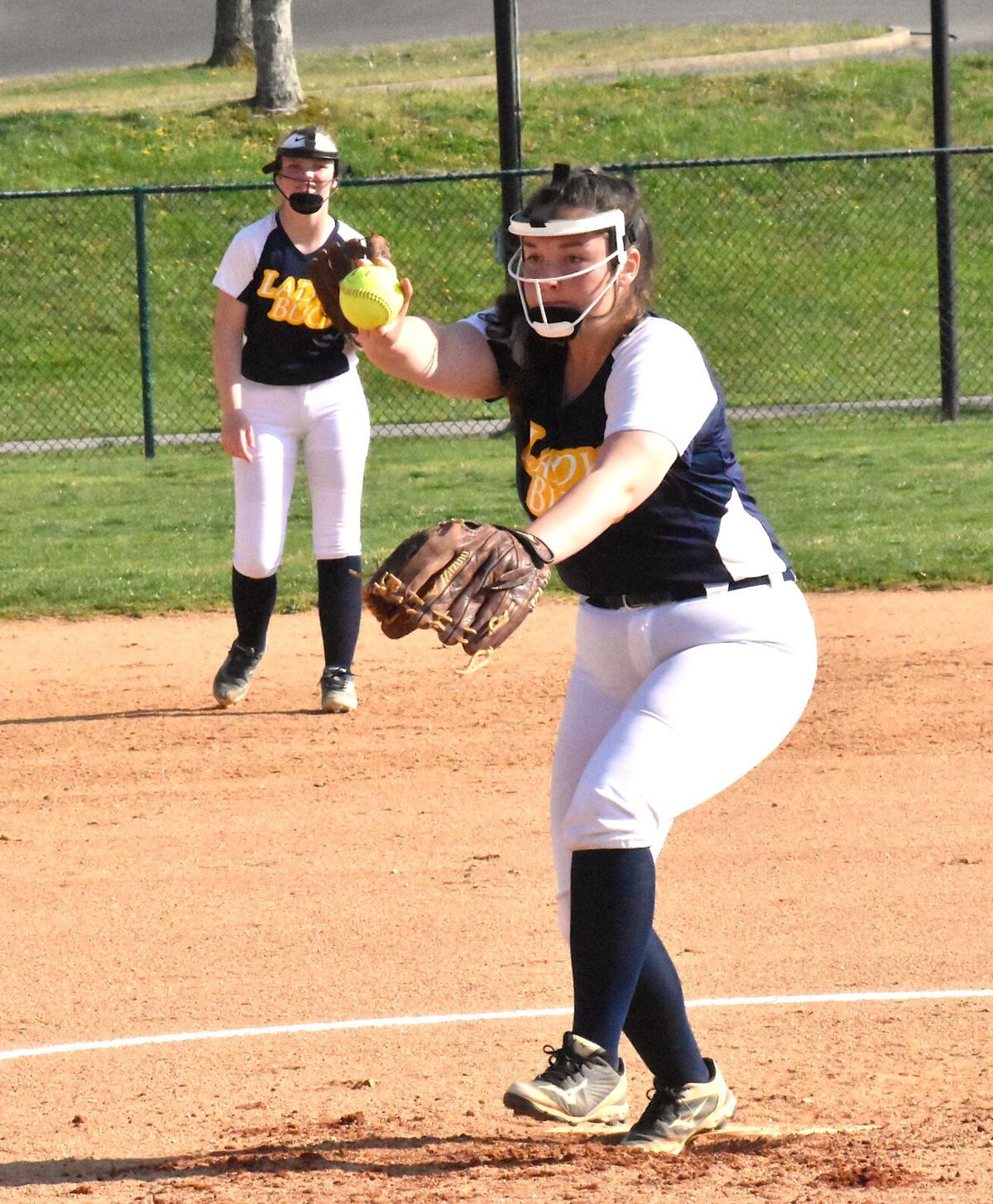 Sullivan North's Kaitlyn Lemmons makes solid contact against University High on Tuesday at Indian Trail. Lemmons was retired on the outfield line out.

University High's Cyndia Dobbins backs away from an inside pitch.

Behind a five-inning no hitter and a pair of hits from Cole Torbett, Science Hill stymied David Crockett for an 11-0 Big Seven Conference baseball win on Tuesday at TVA Credit Union Ballpark.

In softball, pitcher Bree Presnell retired all 21 batters she faced to record a perfect game in a 9-0 win over Volunteer.

Torbett struck out six batters, walking three, as the Hilltoppers topped the Pioneers for the second straight day. He also accounted for two runs.

Jaxon Diamond produced four RBIs and Jack Torbett three runs as the joined Ashton Motte in banging out two hits apiece. Conner Hyatt was 1 for 1 with a double, three runs, two RBI and a pair of walks.

Unicoi County put the potential tying run on second base with no outs in the bottom of the seventh inning, but Elizabethton held on to win Tuesday’s Three Rivers Conference game.

Cooper Tipton went 3 for 4 to pace a 12-hit Elizabethton attack. Coming through with two hits apiece were

Bryson Rollins struck out the side in the seventh to earn a save.

For Unicoi, which was coming off a 4-2 win over the Cyclones on Monday, Valentin Batrez batted 2 for 3 and Travis Whitson swatted a two-run homer.

Luke Hale hurled a five-inning no-hitter in which he accumulated seven strikeouts against one walk.

On the other side of the equation, Hale batted 2 for 2 with three RBIs — two coming off a home run. For good measure, he drew a pair of walks.

Dylan Bartley cracked a two-run homer of his own in a 3-for-4, 4-RBI performance. Seth Chafin (2 runs) and Justice Dillard (double) contributed two hits apiece as the Patriots avenged a loss to the Warriors from the day before.

Preston Miller threw 11 strikeouts in a six-hit shutout for the Trailblazers in the win over the Chiefs.

Miller had 23 first-pitch strikes in the 29 batters he faced and had just one walk. Griffen Jones and Gavin Jones each homered and scored two runs for Boone. Griffen went 3 for 3 at the plate and Anthony Edwards was 2 for 4 with a double.

The Chiefs were led by Peyton Bledsoe with a 2-for-3 effort. Luke Condra had six strikeouts and gave up eight hits, going the distance in the loss.

Getting three RBIs from both Connor Horton and Kaleb Meredith, the Buccaneers dusted Sullivan North for the second day in a row.

Horton was 2 for 2 with a double, two runs and a pair of walks. Meredith went 2 for 3 and had a sacrifice fly.

Brayden Ryder doubled and scored three times, Daniel Grindstaff tallied two RBIs and the Bucs got on base 14 times by walks (8) and hit-by-pitches (6).

Grindstaff (3 IP, 7 Ks) picked up the pitching win as he and Joseph Armstrong (4 Ks), who hurled two shutout frames, combined for 11 strikeouts.

Cranking out 14 hits in a five-inning affair, the Huskies followed up Monday’s tight win (2-0) over the Bulldogs with a one-sided victory.

Jonah Palmer doubled twice in a 3-for-4 showing while Tucker Owen tripled, double, had two runs and knocked in a pair. Brady Harkleroad (2 runs) and Cayden Foulks joined Owen in the two-hit category.

Drew Hoover was 2 for 4 with a double and three RBIs in the Rebels’ league victory against the Longhorns. He also worked his magic on the mound, giving up three hits over six innings before Isaac Haynie closed it out.

Sean Reed also had two hits, including a triple. Eli Jennings drove in two runs and Jackson McGee scored twice after reaching base on a pair of walks.

Bre Presenell threw a perfect game, striking 14 batters in a gem of a performance.

Presnell threw 59 of her 75 pitches for strikes.

Abigail Taylor, Brynne Goines and Jayden Salts each had three hits for the Lady Hilltoppers. Beth Pridemore, Jannon Glaspie and Maddie Holstein each had two hits. Presnell and Glaspie each drove in two runs.

Izabella Absher came through with an RBI single in the top of the seventh inning for the eventual winning run.

Kendall Nash had two hits and three RBIs to pace the Lady Raiders. In the circle, Caden Bayless went the distance, striking out 12 with seven walks and allowing three earned runs.

An eight-run fifth inning turned a tight game into a blowout.

Emma Robinette homered and drove in three runs as the Lady Trailblazers earned the tough win.

Susie Chatman got the win in relief.

Cheyenne Poiroux hit a 10th-inning sacrifice fly to put the Lady Cyclones ahead, and first baseman Kallista Deprimo and shortstop Ember Jensen made it stand up in the bottom of the frame when they turned a bunt attempt into a walk-off double play.

In an extra-inning affair, the Lady Warriors got a walk-off RBI single from Allie Grindstaff in the ninth.

It was a superb effort in the circle for Happy Valley’s Abby Holt. She pitched all nine innings with a whopping 14 strikeouts, walking three and allowing seven hits with zero earned runs.

Hannah Scott threw a three-hitter while Keelye Fields backed her with two doubles and three RBIs.

Playing for the first time since March 23 because of COVID quarantine, the Lady Vikings made short work of the Lady Bulldogs.

Rylee Fields threw a three-inning no-hitter, striking out seven and throwing 26 of her 31 pitches for strikes. She also had two hits and two RBIs as did Grayson Phipps.

The Pioneers earned the district win with a strong performance across the field.

John Plaisted scored twice while Drew Marshall and Austin Sanchez also found the net. Wyatt Thompson had three assists while Marshall added the other one.