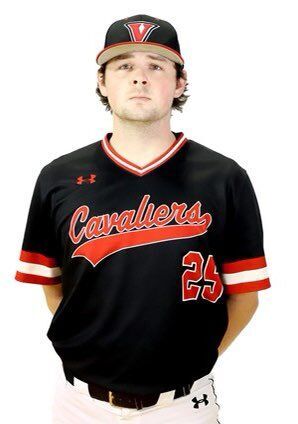 Dobyns-Bennett grad Jeremiah Ball, a pitcher on the UVA Wise staff, is one of the many local players on the Kingsport Road Warriors Appalachian League team.

Dobyns-Bennett grad Jeremiah Ball, a pitcher on the UVA Wise staff, is one of the many local players on the Kingsport Road Warriors Appalachian League team.

He’s coached at several different levels for about 30 years, including the last 20 years or so at Pigeon Forge High School.

Guinn accepted another challenge on the diamond this summer.

The veteran skipper has stepped into the Appalachian League wooden-bat college level as the manager of the new upstart Kingsport Road Warriors.

The Road Warriors came about after USA Baseball sent the players on the Kingsport Axmen home earlier this month.

The Axmen was the original Kingsport team in the new college-player league this summer. But after a player on the team was dismissed for undisclosed reasons and later threatened to kill various team members, USA Baseball — which is responsible for assigning players to the league’s teams — the Axmen were disbanded.

Boyd Sports, which operates the Kingsport team, felt a responsibility to have a squad for Kingsport, according to a statement from the company’s president, Chris Allen.

The organization went to work immediately to build a new team to complete the Appy League schedule.

Part of the quick work was hiring a qualified manager.

“It was pretty quick,” the skipper recalled of his hiring to manage the college players on the field.

Guinn got a text from Allen asking him to help find him players for the Road Warriors. Soon after, Allen asked Guinn and his staff to coach the team.

The last few days, Guinn’s staff and the Road Warrior players have been getting to know each other.

“We’re doing that as we speak,” the coach said. “We’re very excited to be here, and we’re excited about what we’re doing here.”

None of the players on the Road Warriors played for the Axmen.

Coaches and players alike are new to the program.

Many of the players are local guys, while others have come from throughout the country — Oregon, Florida, Oklahoma, Indiana, North Carolina and California among other spots.

They’re all acclimated themselves to the Road Warrior concept, both on and off the field.

“A lot of the local guys want to stay in the hotel instead of at home because they want to be around their teammates,” Guinn said.

Heading into Wednesday’s game against Burlington at Johnson City, the Road Warriors (0-3) have yet to win a game, but they’re getting the opportunity to play against quality competition during the summer.

The wins will come, the manager said.

“There’s a high quality of baseball in this league,” Guinn said. “These are college baseball players. It’s a minor-league atmosphere. It’s a really good atmosphere, and we hope the fans will come out and enjoy it.”

The Road Warriors come by their name honestly.

The Kingsport team will not play any home games at Hunter Wright Stadium for the remainder of the season.

After Wednesday’s game with Burlington, Kingsport is scheduled to play at Johnson City on Thursday and Friday before traveling to Bluefield for a two-game series on Saturday and Sunday.