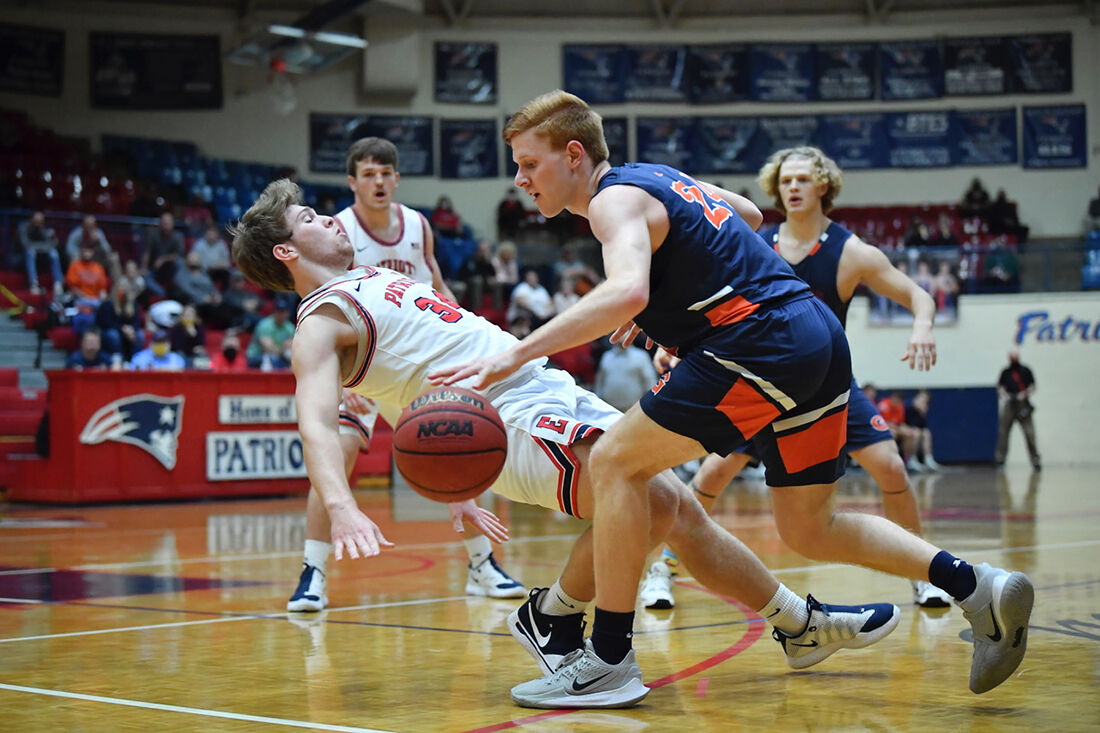 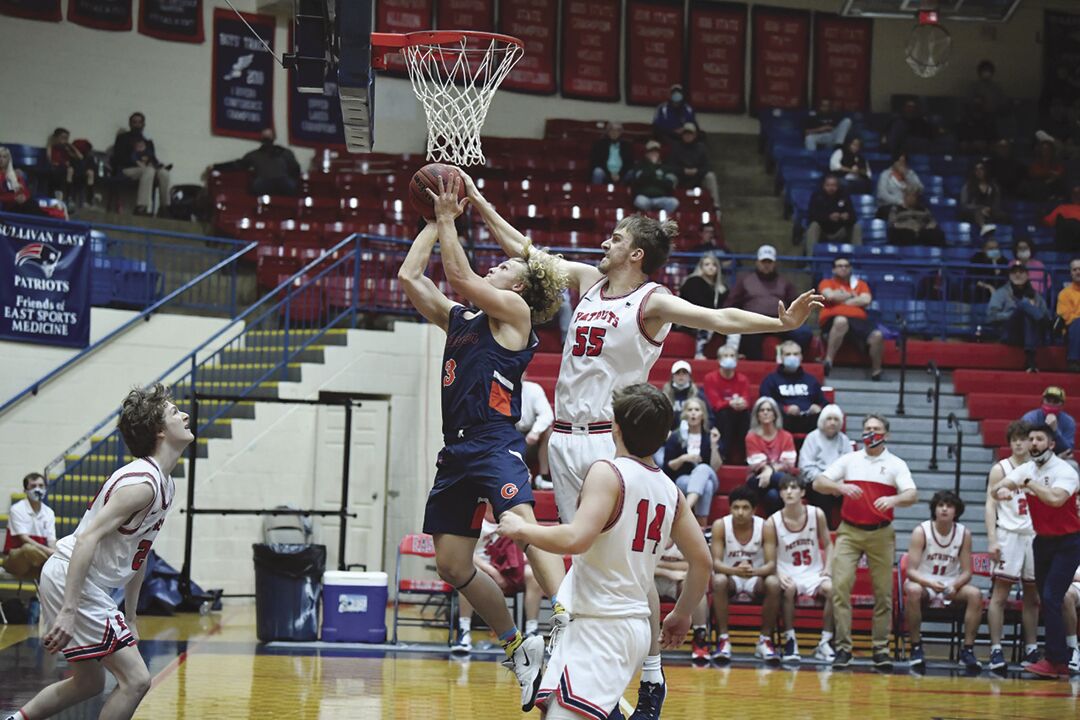 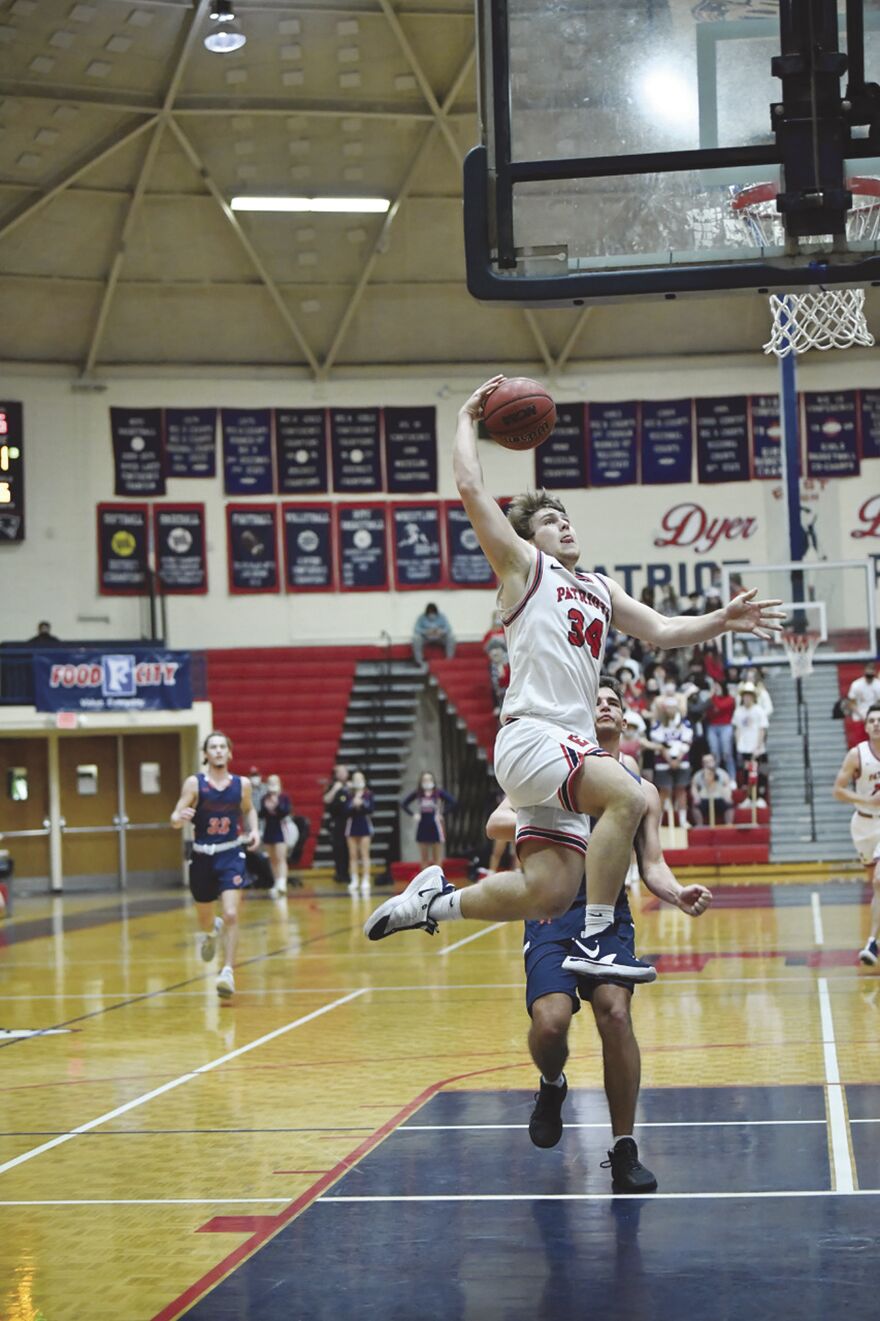 The Patriots' Dylan Bartley sails in for two of his game-high 28 points. (Cheryl Gray photo) 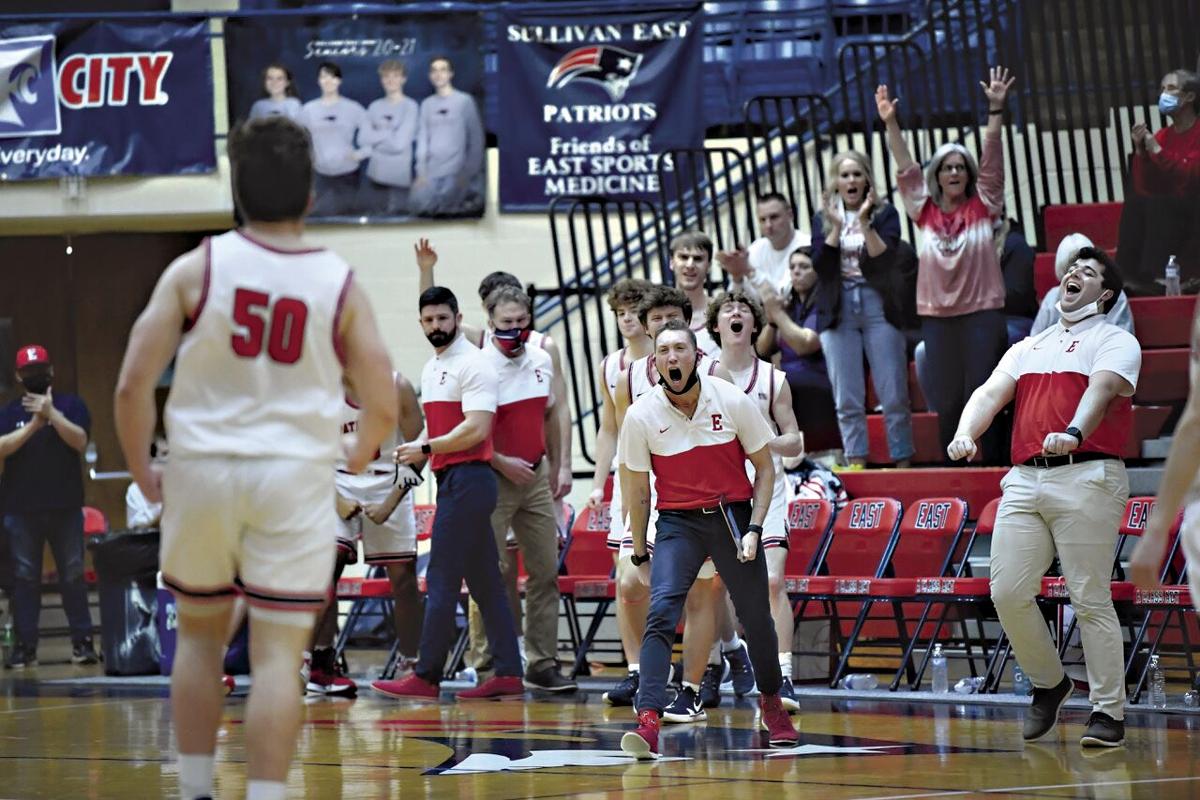 The Sullivan East bench reacts to a favorable moment for the Patriots. (Cheryl Gray photo)

The Patriots' Dylan Bartley sails in for two of his game-high 28 points. (Cheryl Gray photo)

The Sullivan East bench reacts to a favorable moment for the Patriots. (Cheryl Gray photo)

After jumping ahead 10-0 in the first four minutes of the game, the Patriots made the rest of the meeting look relatively easy on the way to an 82-47 win over Grainger in Tuesday’s Region 1-AA boys basketball semifinal at the Dyer Dome.

East (24-6) will host Greeneville in Thursday’s championship game and have secured a sectional berth.

The quick start offensively was a key for the Patriots, but first-year head coach Dillon Faver was just as impressed with his team’s defensive attack against the normally hot-shooting Grizzlies (19-10).

“I know we came out and we played really good team defense,” Faver said. “Grainger has great shooters. They have great players. They run good stuff and create great offense.

“I knew we had to come out and play good defense and rebound the basketball if we wanted a chance to win. I’m proud of my guys for stepping up to the challenge.

“They put us out last year. We didn’t forget.”

ONE FOR COACH DYER

Dylan Bartley did not forget.

The junior scored a game-high 28 points, including going 12 of 12 from the free throw line, in leading the Patriots to the win.

He said he and his teammates wanted the win to move into the regional championship game and they wanted the win for long-time Sullivan East coach John Dyer.

Dyer resigned at the end of last season.

The last game he coached was the regional quarterfinal loss to Grainger.

“It was a great game (tonight) and we played the game for Coach Dyer,” Bartley said. “He came here for 32 years and we played for him.”

Bartley said the Patriots put an emphasis on shooting in practice and it paid off for the squad Tuesday.

“We got really good shots and they went in for us. That’s what we practice every day and it went well for us,” Bartley said.

Defense is also a point of emphasis in practice for the Patriots.

It showed in Tuesday’s win.

“They’re a really good shooting team,” Bartley remarked. “They showed they could shoot, but we stopped them.”

East jumped ahead 19-8 in the first quarter and led 45-21 by the intermission.

The Patriots cruised in the second half, outscoring Grainger 37-26 to secure the big win.

In addition to Bartley’s 28 on the night, East got 13 points apiece from Logan Murray and Ethan Bradford.

Clayton Ivester added seven points and 10 rebounds for the Patriots.

Brady Grubb led Grainger in scoring with 17 points, while Jaxon Williams added 13 for the Grizzlies.