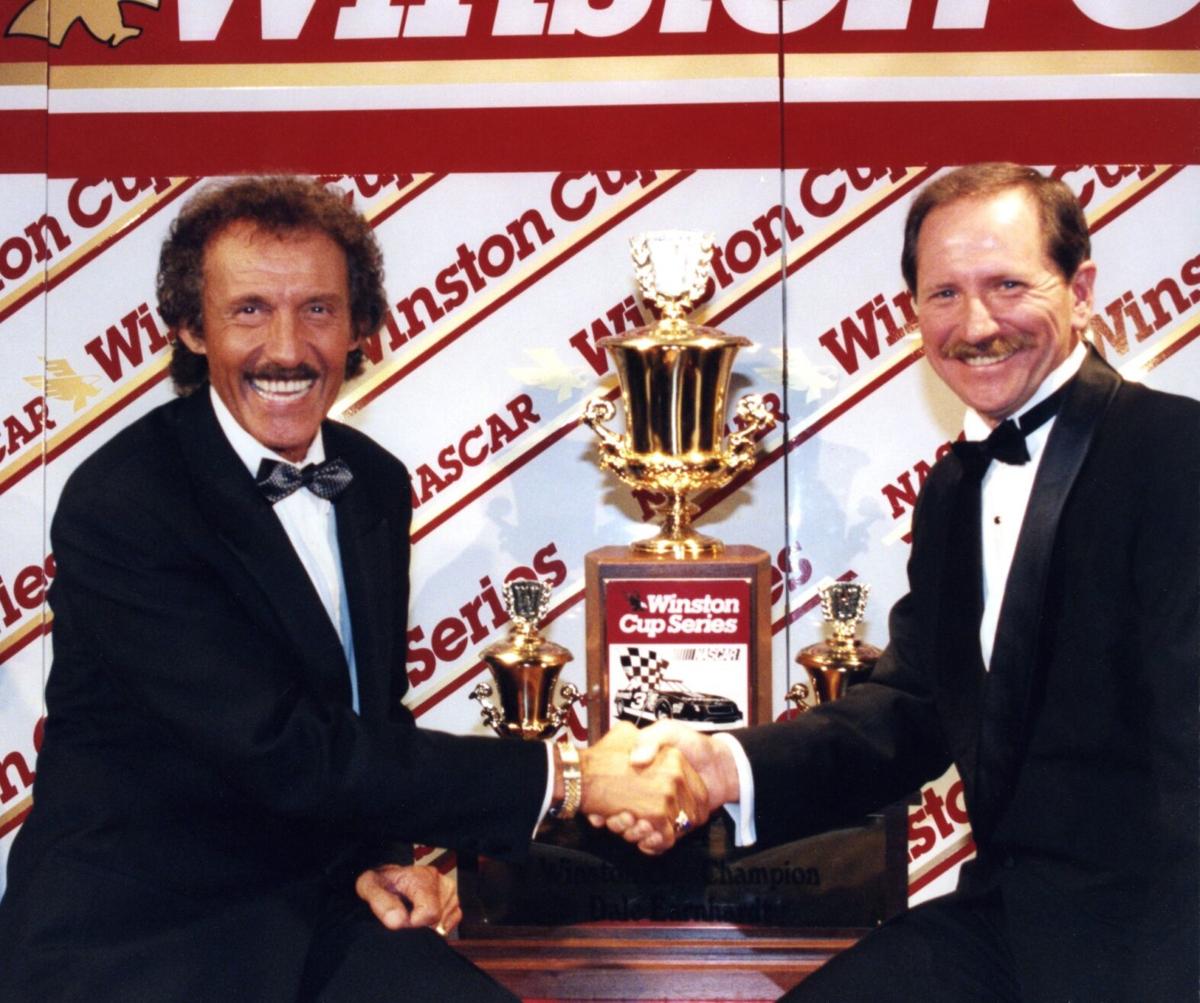 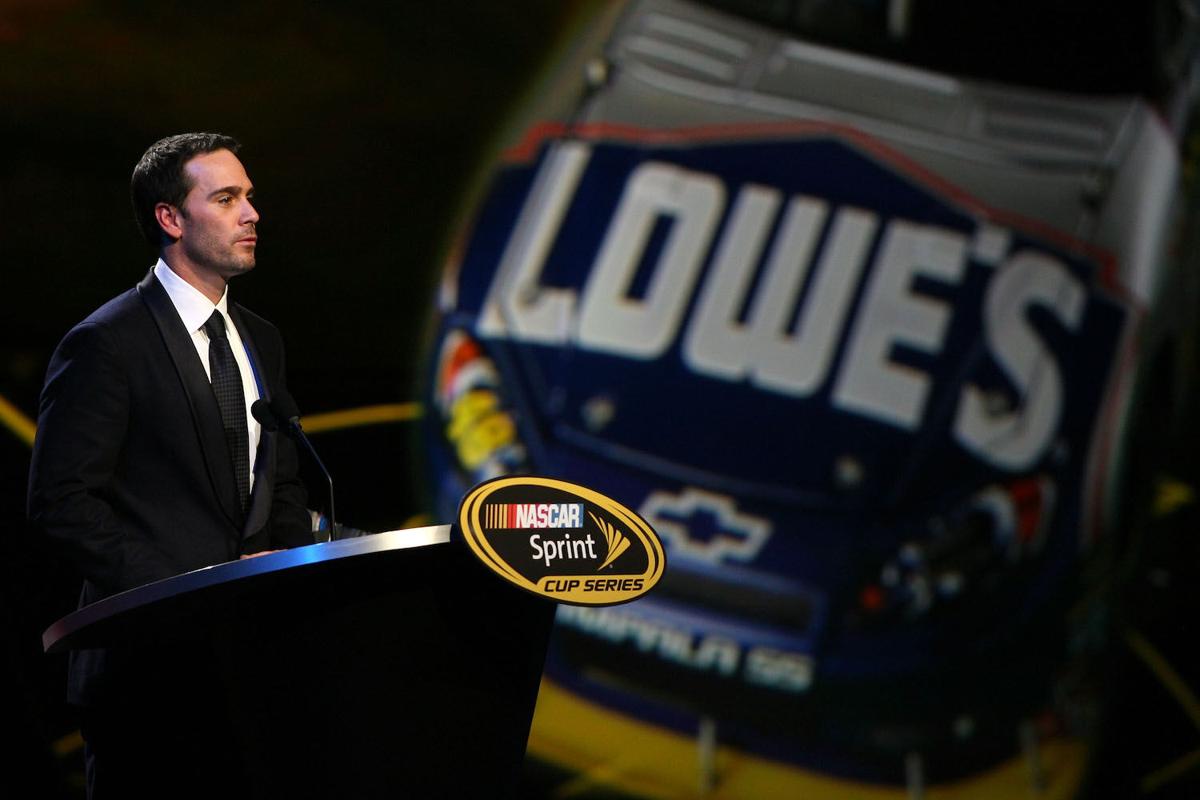 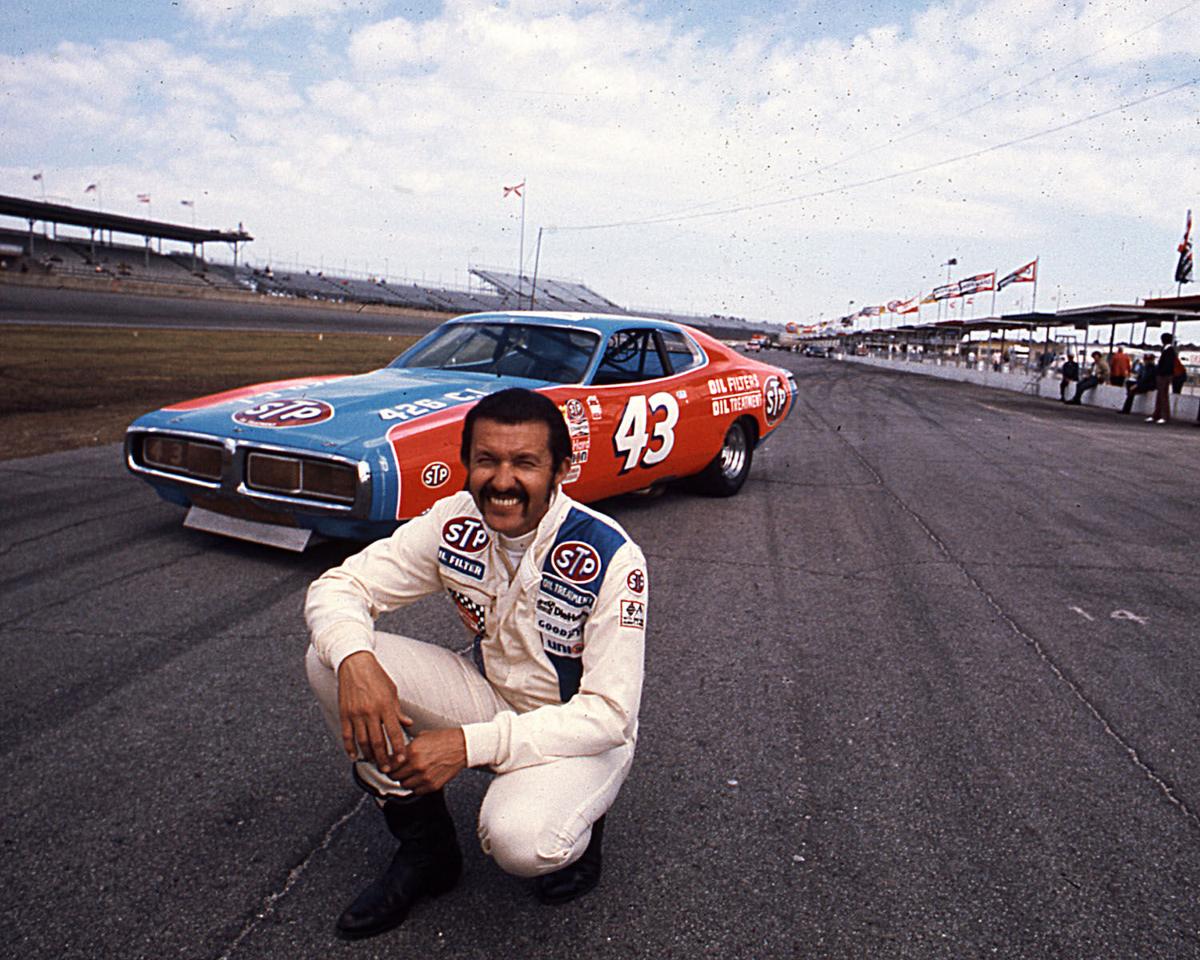 Richard Petty won his fourth Daytona 500 in 1973 behind the wheel of the Petty Enterprises Dodge Charger. 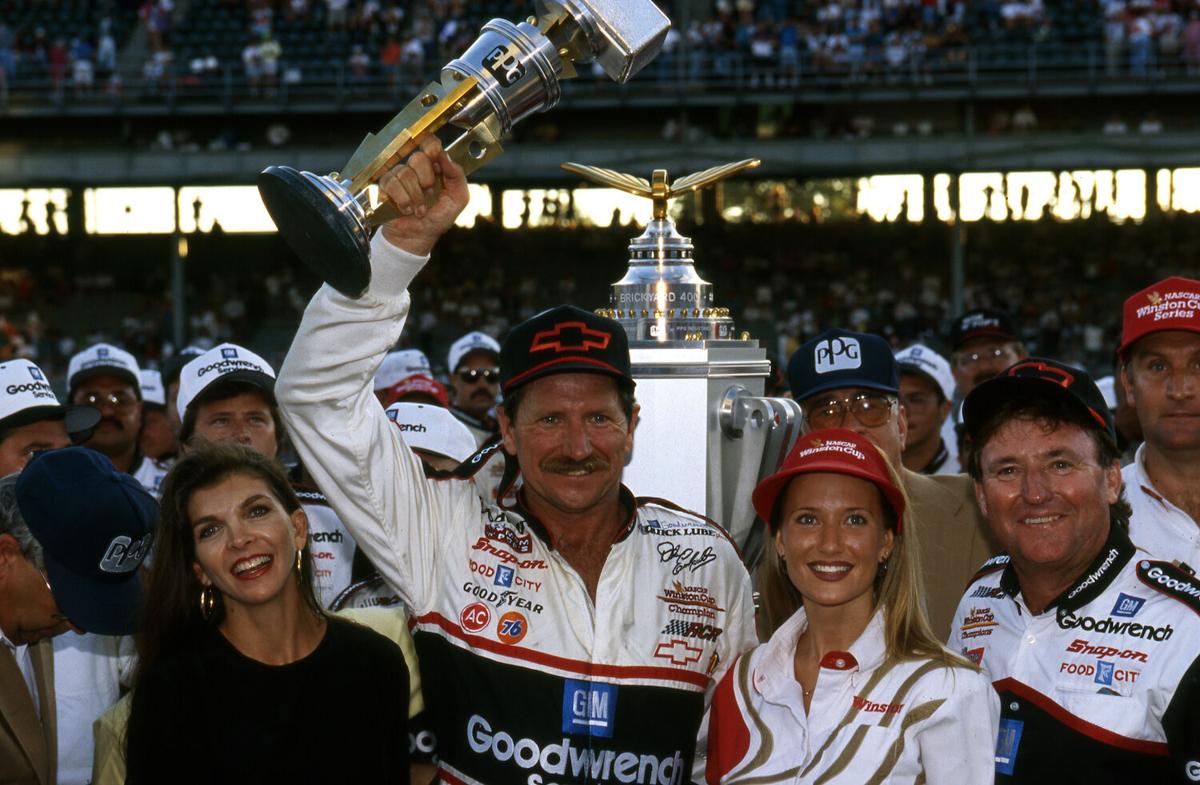 Dale Earnhardt holds up the trophy after winning the 1995 Brickyard 400 at Indianapolis Motor Speedway. 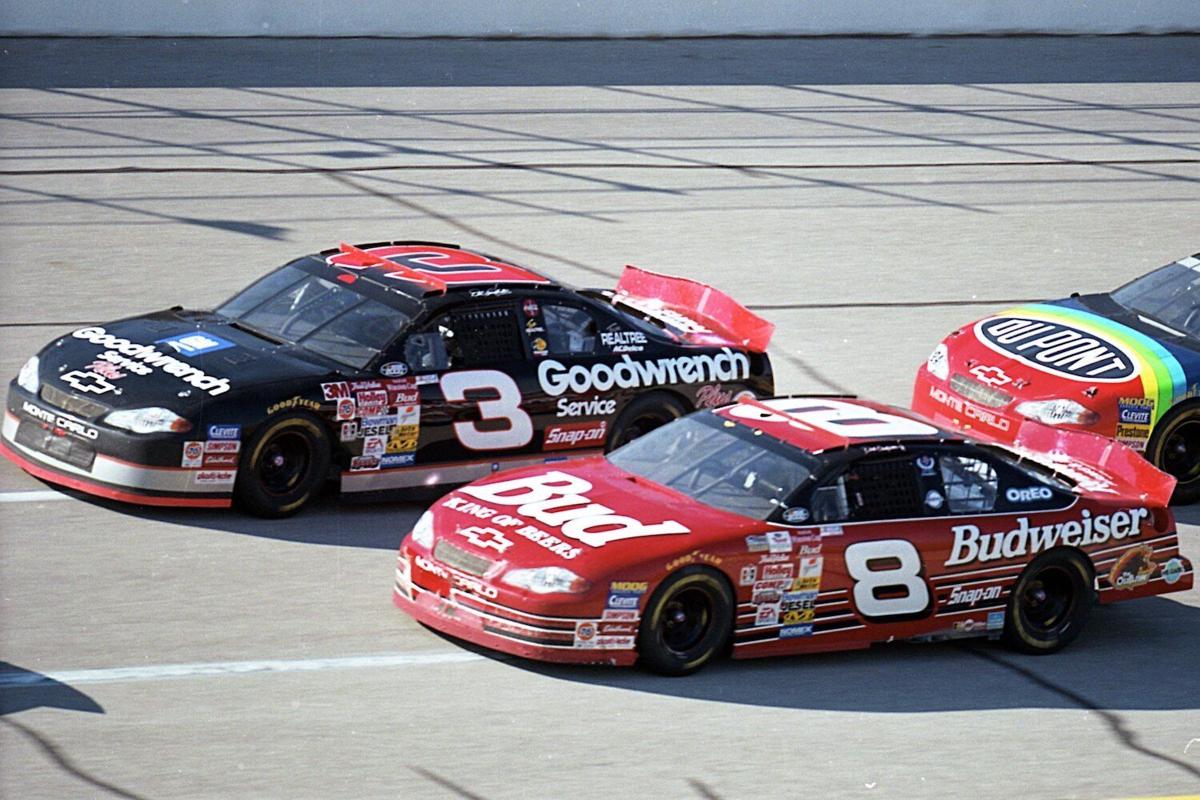 Dale Earnhardt (3) passes Dale Earnhardt Jr. (8) at the 2000 Winston 500 at Talladega Super Speedway as Jeff Gordon closes in, at right. 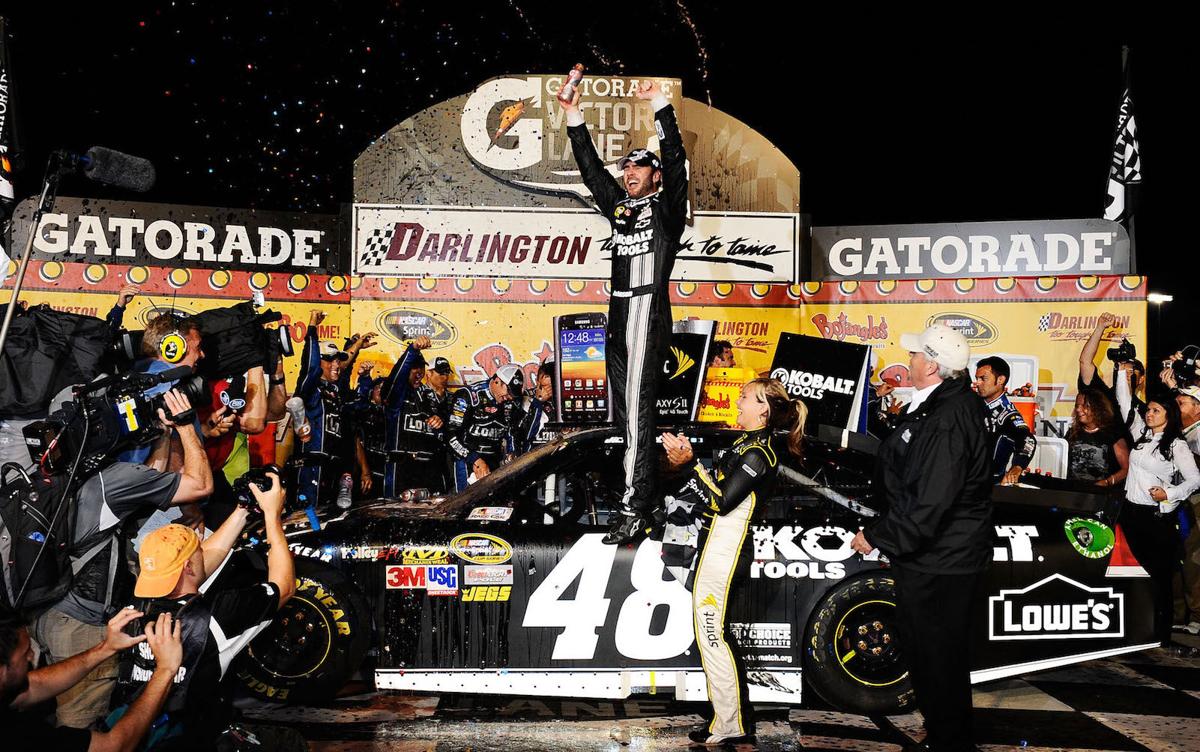 Richard Petty won his fourth Daytona 500 in 1973 behind the wheel of the Petty Enterprises Dodge Charger.

Dale Earnhardt holds up the trophy after winning the 1995 Brickyard 400 at Indianapolis Motor Speedway.

Dale Earnhardt (3) passes Dale Earnhardt Jr. (8) at the 2000 Winston 500 at Talladega Super Speedway as Jeff Gordon closes in, at right.

Jimmie Johnson retired from full-time NASCAR competition in 2020, leaving the question if he is the sport’s greatest driver.

He is one of only three drivers, along with Richard Petty and the late Dale Earnhardt, to earn seven Cup Series championships. Others may argue for three-time champion David Pearson, who had a better head-to-head win percentage than Petty, or four-time champion Jeff Gordon as NASCAR’s greatest driver.

However, there have been only three men to win seven titles and here are the cases why each should or should not be considered the greatest champion.

WHY THE KING IS THE GREATEST 7-TIME CHAMPION

No one comes close to matching Petty’s record of seven wins in NASCAR’s biggest race, nicknamed “The Great American Race” or the “Super Bowl of Stock Car Racing.”

Cale Yarborough comes next with four Daytona 500 wins, followed by Bobby Allison, Jeff Gordon, Dale Jarrett and Denny Hamlin all with three. Johnson won the 500 twice in 2006 and 2013, while Earnhardt captured his lone 500 win in 1998.

Won on all surfaces, different kinds of cars

While all three won on superspeedways, intermediate tracks, one-milers and short tracks, Petty also won NASCAR’s last race on dirt in Sept. 1970. Of course, Earnhardt nor Johnson had the opportunity to race in the Cup Series on dirt, which will return at Bristol in March.

Petty was much more accomplished on road courses with five wins at Riverside (California) and one at Bridgehampton (New York). Earnhardt scored his only road course victory by beating Mark Martin at Sonoma in 1995. Johnson won at Sonoma 25 years later with Robby Gordon finishing second.

It’s always the biggest criticism of Petty. He won so many races in an era when Petty Enterprises was one of the few teams with factory support and when there were 4-5 cars capable of winning most races instead of 12-15 cars. For example, in the 1975 season — when Petty swept Bristol races — only 23 drivers started in the Southeastern 500, where he finished six laps ahead of second-place Benny Parsons.

WHY THE INTIMIDATOR IS THE GREATEST 7-TIME CHAMPION

Earnhardt won his first series championship with car owner Rod Osterlund and crew chief Doug Richert in 1980. His other six championships came with Richard Childress Racing, which had won races with Ricky Rudd in 1983-84 — but hadn’t been a championship contender.

Competitive until end of career

Earnhardt won three races in 1999 and two more in 2000, his last full season in the Cup Series. In addition, Earnhardt finished as series runner-up to Bobby Labonte that final season.

In an interview before his fatal crash in the 2001 Daytona 500, Earnhardt felt he was ready to contend for a record eighth title after healing from a bothersome neck injury. On the other hand, Petty went winless from his 200th career victory at the 1984 Firecracker 400 at Daytona until his last race in 1992. Johnson didn’t win for the final 3½ years of his career after winning at Dover in 2017.

Almost all of Petty’s and Johnson’s stock car success came in the Cup Series, while Earnhardt won four championships and 11 races in 59 International Race of Champions (IROC) starts. In the series that pitted drivers of different disciplines in equally matched cars, Petty never won in 21 starts. Johnson had one win in eight IROC starts.

Earnhardt was also a 21-time race winner in the Busch Series (now Xfinity Series), while Johnson won a single race in 93 starts.

Petty never raced in the Busch Series and made limited appearances in the old Late Model Sportsman series. He did race in NASCAR’s convertible series in 1959, winning a race and finishing fourth in point standings, one position ahead of Johnson City driver Brownie King.

Earnhardt is known for his spectacular wins like “rattling Terry Labonte’s cage” at Bristol, but his 76 career victories rank eighth on the all-time win list. Earnhardt led the series in wins on just two occasions (1987, 1990), while Petty accomplished the feat during seven separate seasons and Johnson did it five times.

WHY SEVEN-TIME IS THE GREATEST 7-TIME CHAMPION

Johnson has raced in an era of the deepest talent in the sport, most impressively outrunning his teammate Jeff Gordon in Hendrick Motorsports equipment. Other champions Johnson outperformed throughout his career included Tony Stewart, Kyle Busch, Kevin Harvick, Kurt Busch, Matt Kenseth and Joey Logano.

Five championships in a row

Once Johnson knocked down the door with a first championship in 2006, it set off an incredible run not seen before. He won five straight NASCAR titles, breaking Cale Yarborough’s record of three straight from 1976-78.

AP Male Athlete of the Year

Truly the Associated Press Athlete of the Year in 2009 fits with Johnson, who has competed in triathlons and run the Boston Marathon. While physical training was something that some drivers did in earlier eras, Johnson certainly took it to another level. It helped him stay a step ahead, or in his case, car lengths ahead of his competitors.

Johnson’s crew chief Chad Knaus was penalized eight times for major violations during their time together and his actions even forced NASCAR to pass a rule about shock absorbers in 2005.

Knaus was suspended six races in 2006 and Darian Grubb served as crew chief for Johnson during his first Daytona 500 win. It has drawn comparisons with Tom Brady and Bill Belichick having incredible success with the Patriots, but their achievements often discounted because of pushing the limits of the rules.

That’s not to say Petty and Earnhardt didn’t have their own rules issues. Petty’s engine for his 198th career win at Charlotte was found to be 381 cubic inches, well over the 358 allowed in the NASCAR rulebook. Earnhardt was known for lobbying NASCAR for rules changes if he thought another team or manufacturer had an advantage.