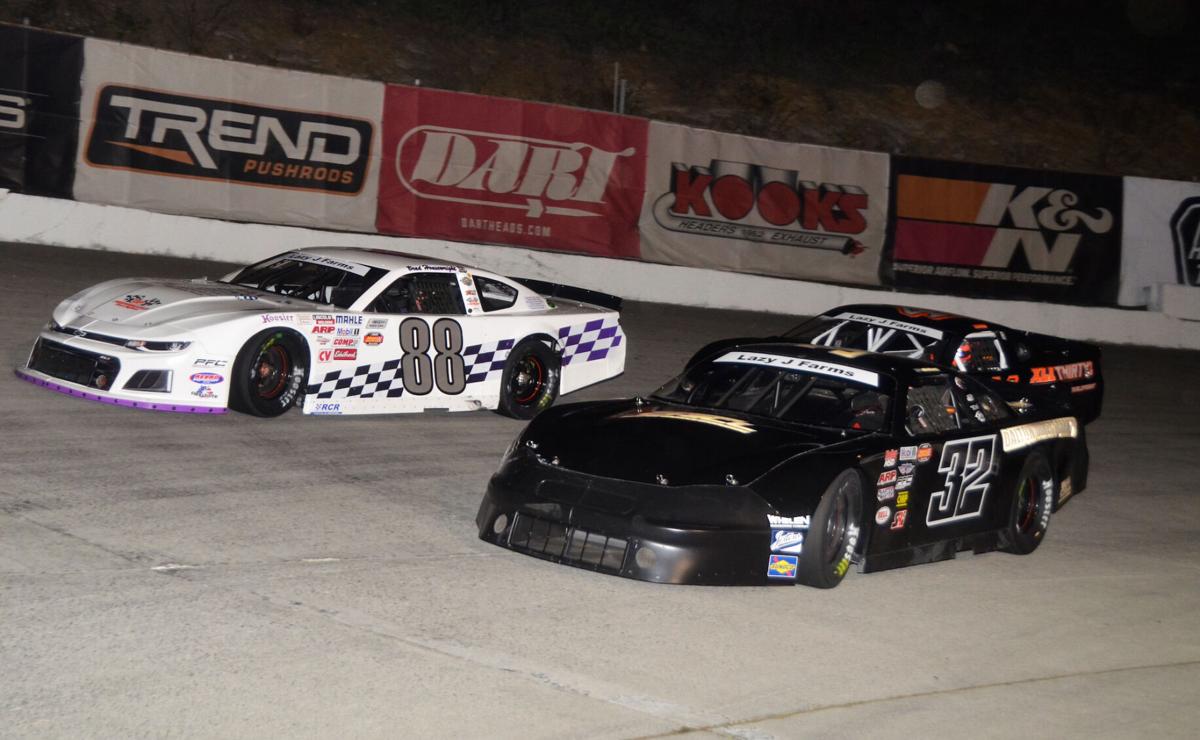 Nik Williams (32) goes to the inside of Brad Housewright (88) to grab the lead as third-place Magnum Tate trails in Kingsport on Friday night. 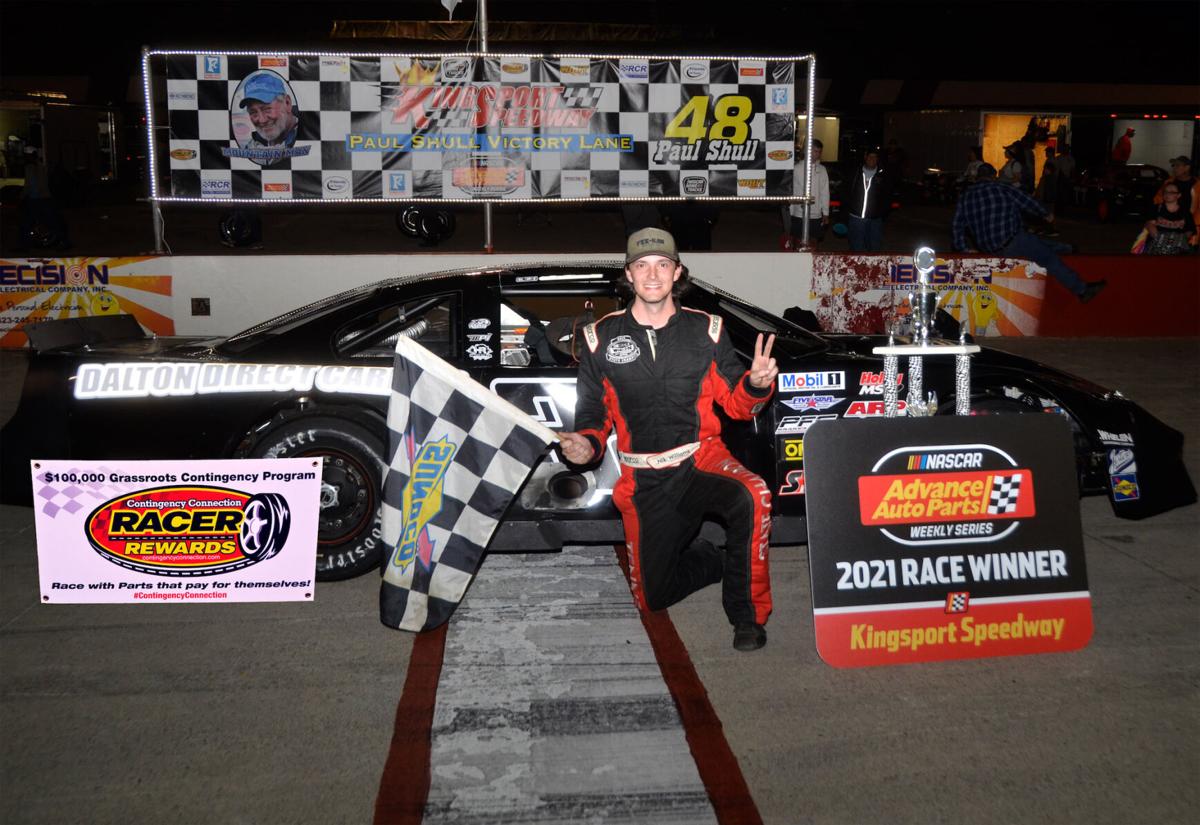 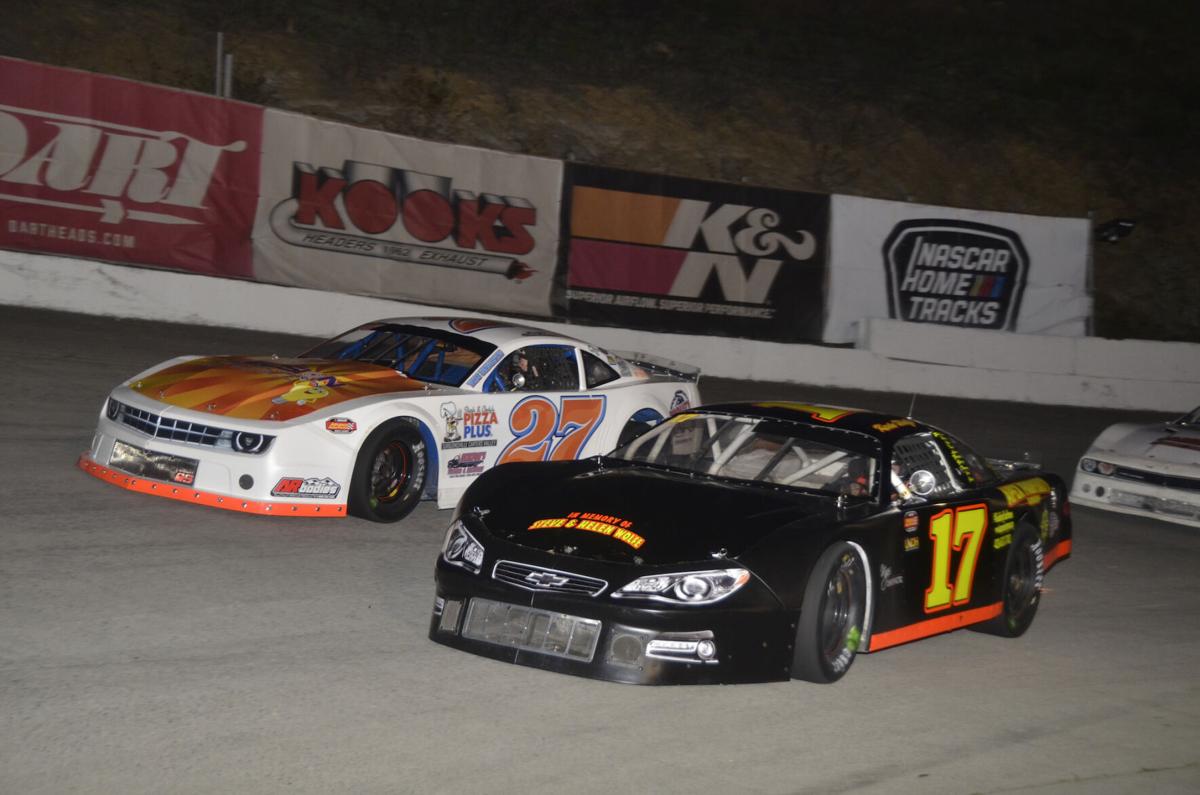 Kevin Wolfe (17) drives to the inside of Rusty Clendenin (27) to take the lead in Friday's Sportsman feature at Kingsport Speedway. 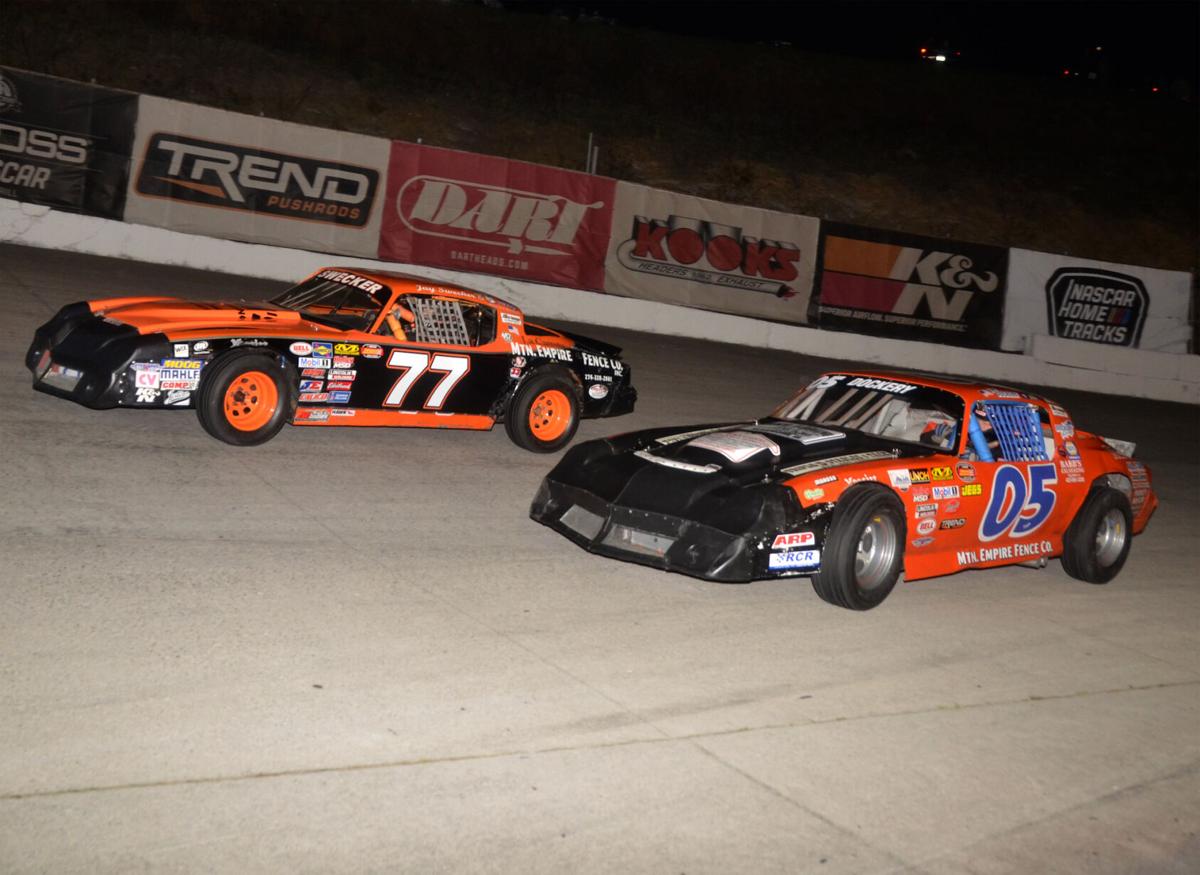 Jay Swecker (77) holds off a fast charging Tony Dockery (05) for the lead in Friday's Pure Street feature at Kingsport Speedway. 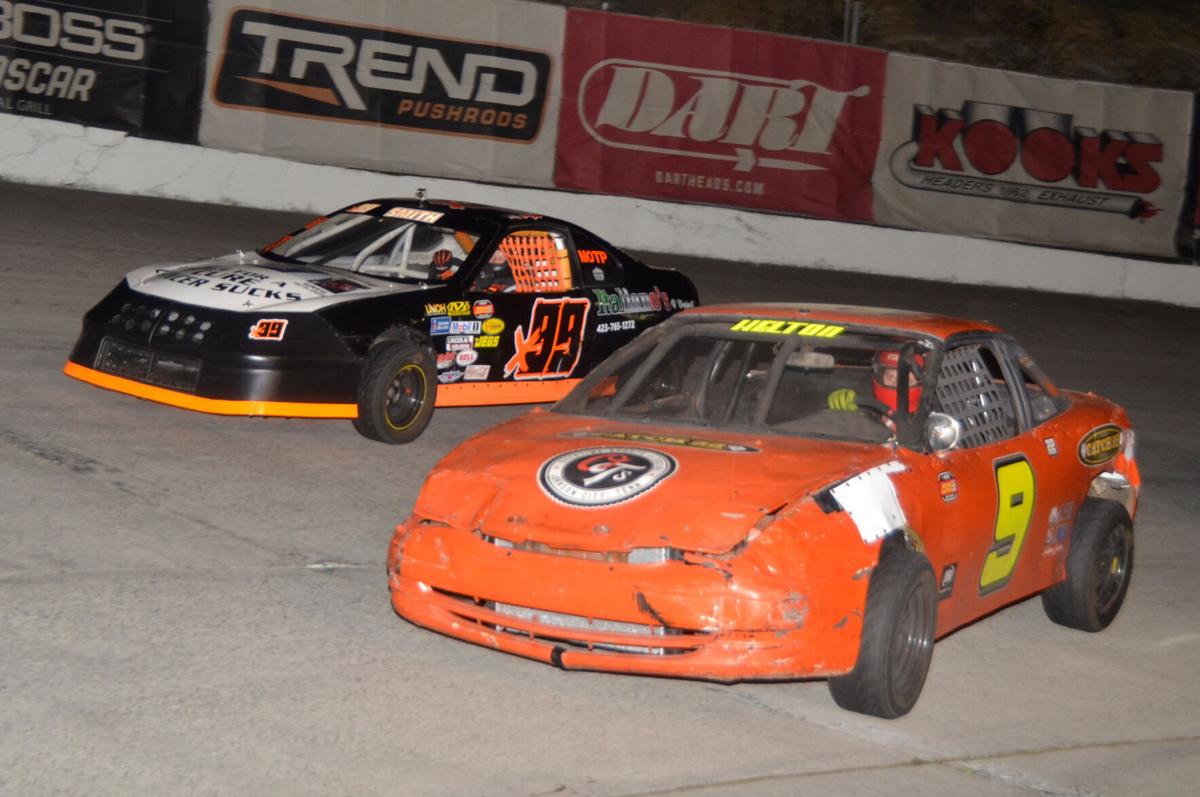 A determined Keith Helton (9) passes Bucky Smith (99) on his way to the front of Friday's Pure 4 race at Kingsport Speedway. 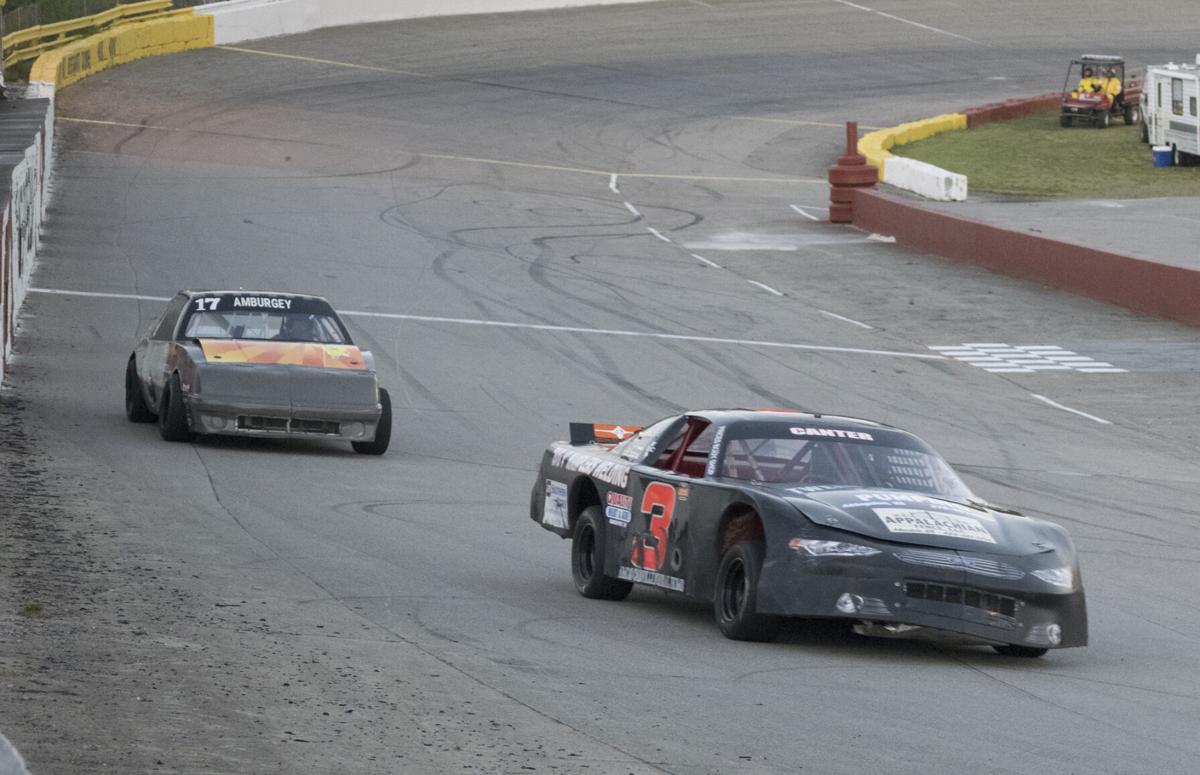 Nik Williams (32) goes to the inside of Brad Housewright (88) to grab the lead as third-place Magnum Tate trails in Kingsport on Friday night.

Kevin Wolfe (17) drives to the inside of Rusty Clendenin (27) to take the lead in Friday's Sportsman feature at Kingsport Speedway.

Jay Swecker (77) holds off a fast charging Tony Dockery (05) for the lead in Friday's Pure Street feature at Kingsport Speedway.

A determined Keith Helton (9) passes Bucky Smith (99) on his way to the front of Friday's Pure 4 race at Kingsport Speedway.

KINGSPORT — Nik Williams made a daring 4-wide pass for the lead to capture his second straight victory in the Late Model Stock division Friday night at Kingsport Speedway.

Williams was running third in his black No. 32 Chevrolet when Brad Housewright got to the inside of leader Magnum Tate coming off turn two on lap 25 of the 60-lap feature.

Seeing an opening, Williams dove to the inside of both of them. They approached a lapped car on the backstretch and Williams emerged with the lead by the time they exited turn four.

From there, Williams pulled away from Housewright to score the win in the NASCAR Advance Auto Weekly Series. After going winless all of last season on the 3/8-mile concrete oval, the 2019 track champion is 2 for 2 to start this season.

Williams explained he couldn’t hesitate when it came to making the winning pass.

“My car didn’t come in the first of the race. I thought that might be my only opportunity, so I took it,” said the Chuckey driver. “That might have been the only opportunity I got unless I roughed somebody up. Turns out, it was a good move.

“I feel so good for my team after last year was such a rough year. It’s so good to be here in victory lane.”

Housewright navigated his way through the traffic to finish second. The Kingsport driver feels it’s only a matter of time before his white No. 88 Chevrolet is parked in victory lane.

“It got a little crazy. I was hoping the No. 32 was going to be a little more patient, but it’s racing,” Housewright said. “We’re getting a little better every week. Tonight, the longer we ran, the car got better. Nik got out to the lead, but after that, our lap times were neck-and-neck.”

Tate, a 17-year-old from Greenville, South Carolina making his Kingsport debut, held on for third. He pushed his black No. 41 Chevy to the limits as the right front tire blew after the race.

Still, Tate enjoyed his first trip to the “Concrete Jungle.” He took the lead from pole sitter Joey Trent on the opening lap and pulled away early before Williams and Housewright reeled him back in.

“The name really fits here. This place is awesome,” Tate said. “I really enjoyed racing here and hope I can come back here soon. We beat on each other a little, but the guys raced me clean and I had fun.”

It was a tight battle from third through sixth. Wayne Hale was fourth followed by Trent and Derek Lane.

Kevin Wolfe, another 2019 track champion who went winless last season, returned to victory lane with a pass of Rusty Clendenin on lap 11 of the Sportsman feature.

The race got off to a wild start as pole sitter Chris Tunnell spun on the first lap after contact with Austin Brooks.

Clendenin, who won the season opener, pulled out front before Wolfe chased him down and made the winning move. Clendenin held on for second with Brooks placing third. Tunnell and Brayden Goddard rounded out the top five.

Jay Swecker scored an emotional victory in the Pure Street division, holding off a tough challenge from Tony Dockery at the end.

Swecker, like Williams and Wolfe, is a former track champion who went winless last season. His victory, however, meant so much more as the Kingsport driver had surgery during the offseason to remove a brain tumor.

In addition, it was his 53rd birthday with several of his family in attendance — including his sister visiting from Maryland.

“We’ve been through so much. It means a whole lot,” Swecker said as the tears flowed. “Blowed the old car up last week, I put the old motor I had back in it and we didn’t practice until today. Come out and here we are in victory lane.”

Dockery, who got into an earlier tussle with Rob Austin, finished second with Billy Walters third. Austin was fourth with Ricky Payne in fifth.

Keith Helton recovered from a near spin in his orange No. 9 Saturn to pass Billy Byington for the win with six laps to go in the Pure 4 feature.

Helton had fallen to fifth after contact with Johnny Harris. He powered back to the front, leaving Byington in the runner-up position. Kingsport drivers took all top-five spots as Kenny Absher finished third, Bucky Smith fourth and Bruce Crumbley fifth.

Canter has won both Mod 4 races this season with Amburgey the runner-up each time. Jerry Miller finished third ahead of Billy Duty and Ted Glover.