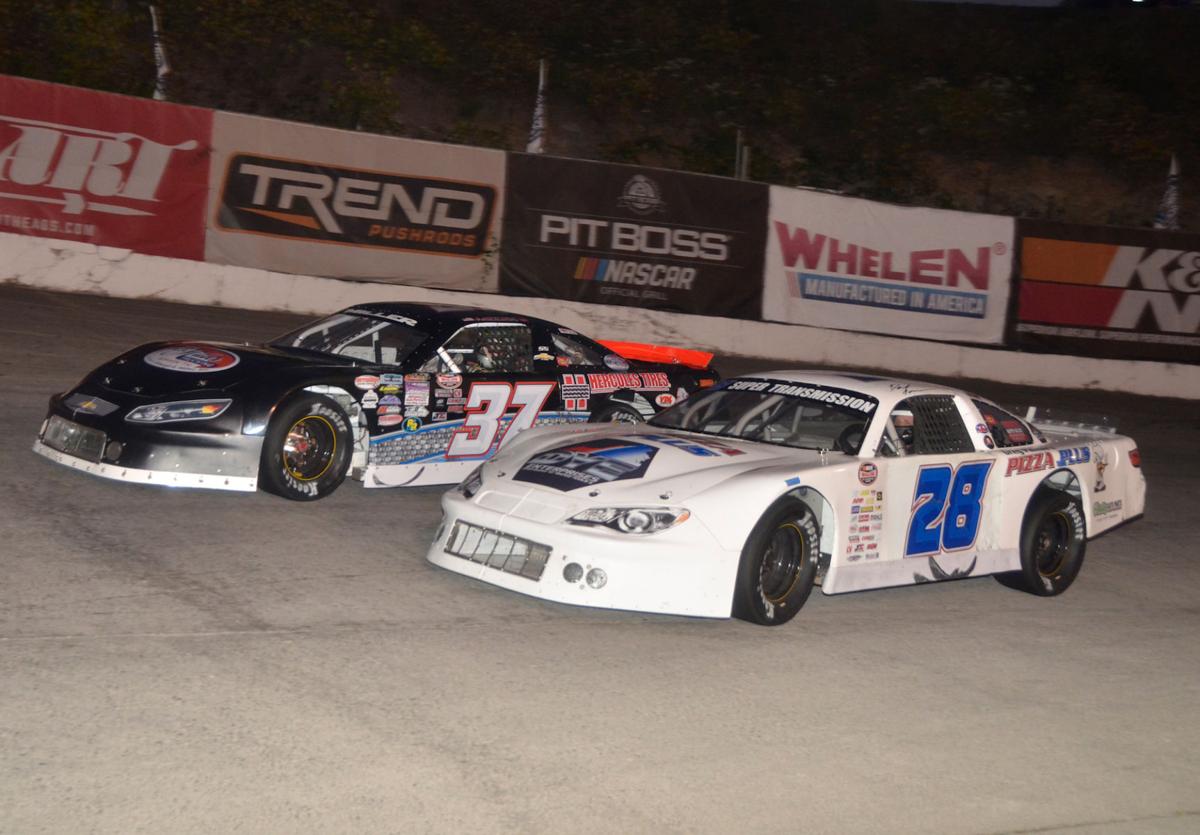 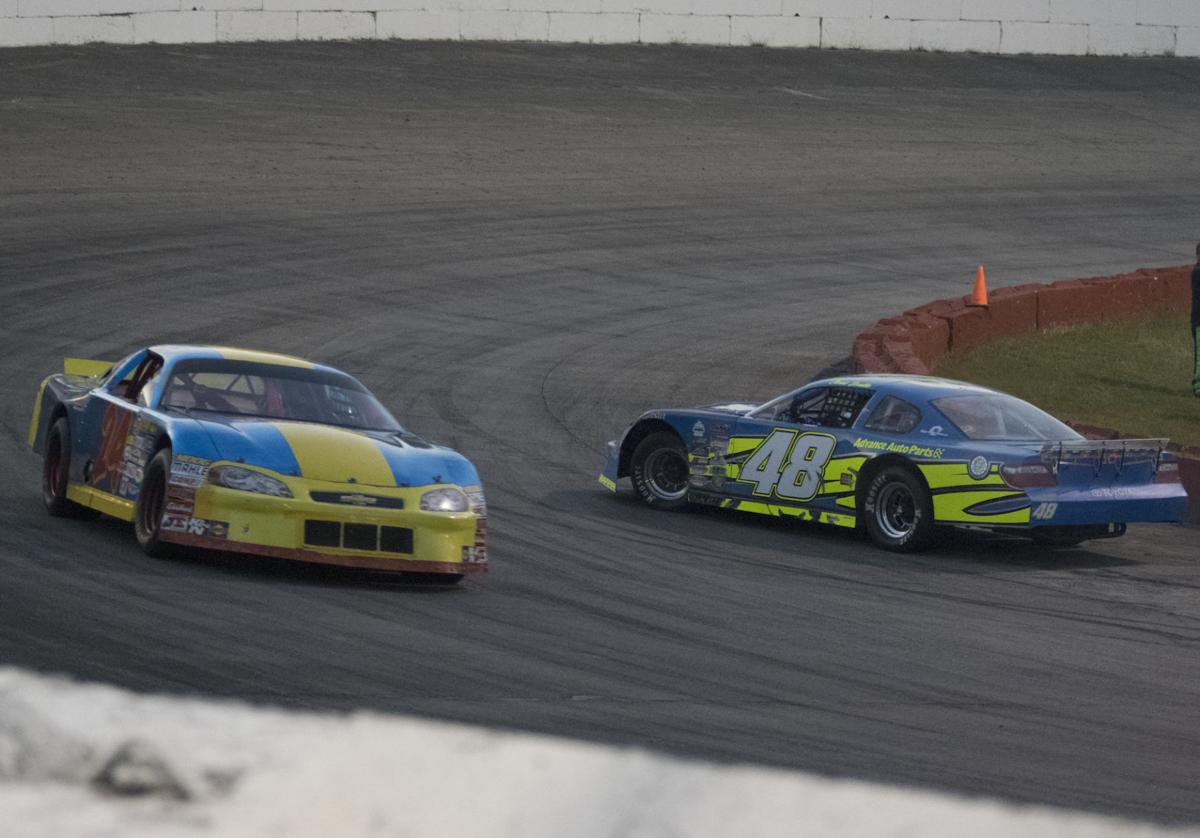 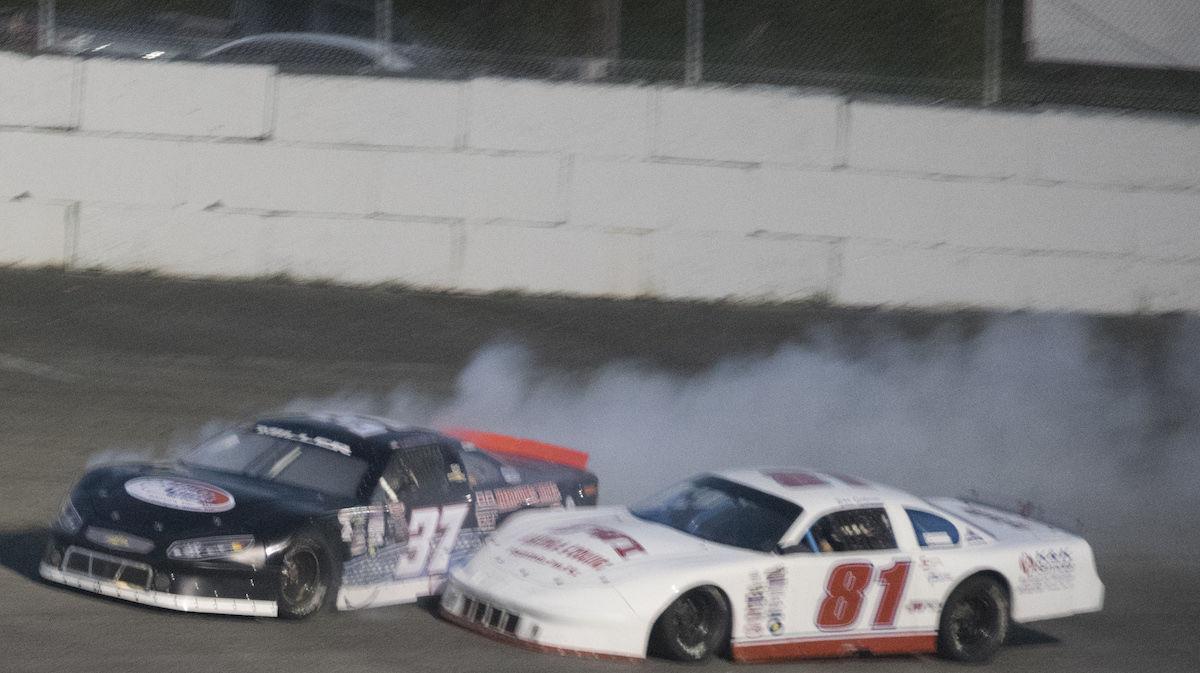 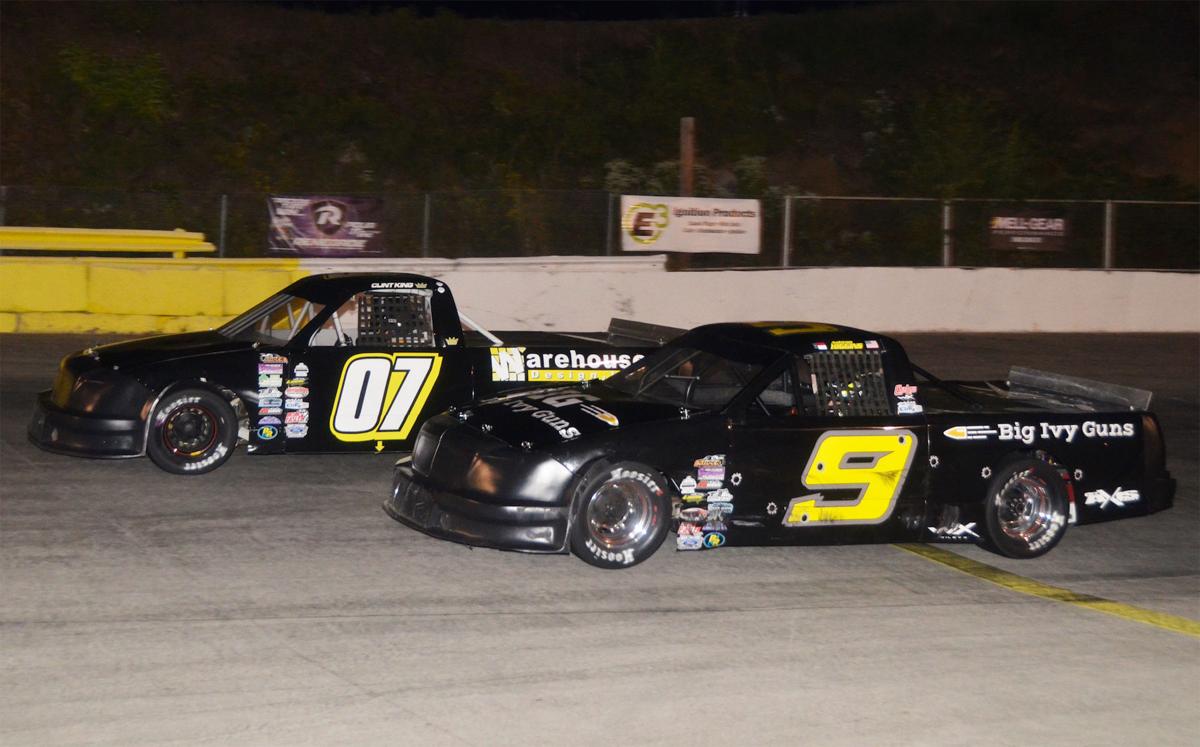 Ashton Higgins (9) goes to the inside of Clint King (07) during Saturday's Southeast Super Trucks race at Kingsport Speedway. 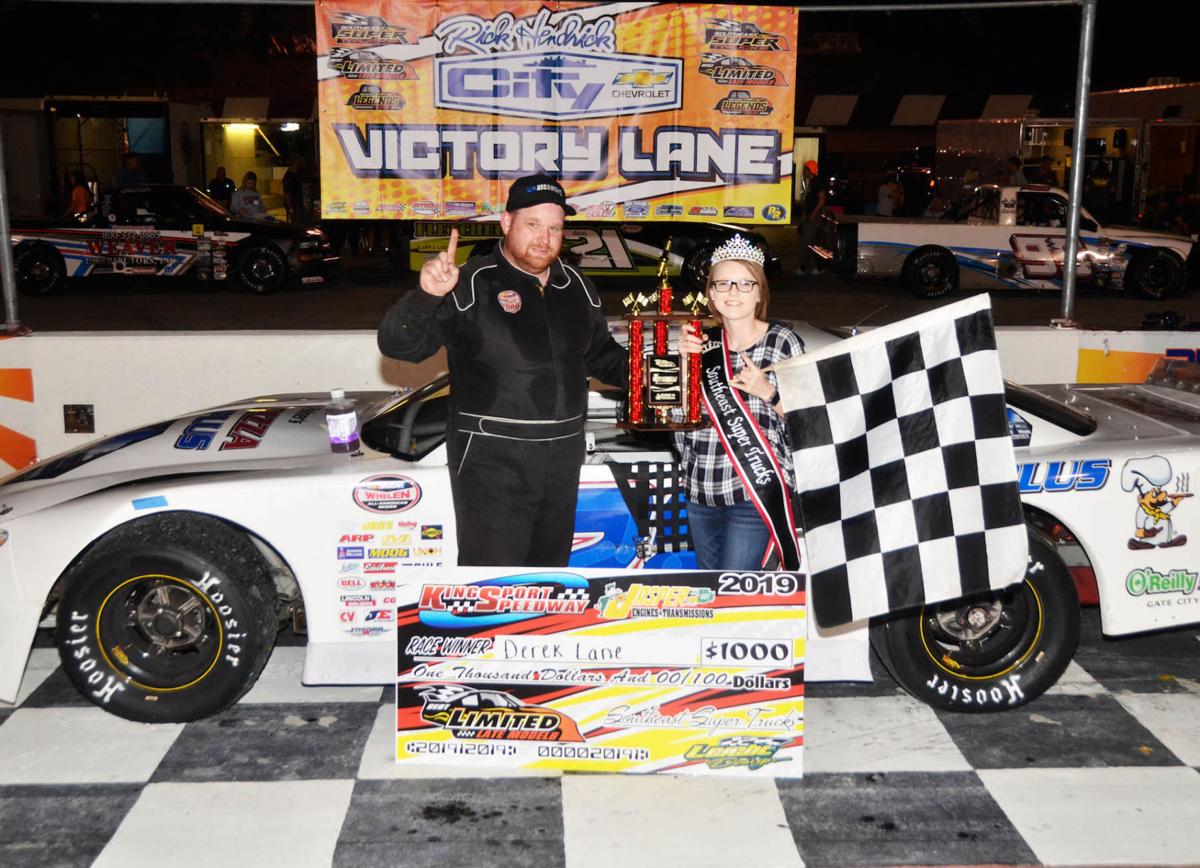 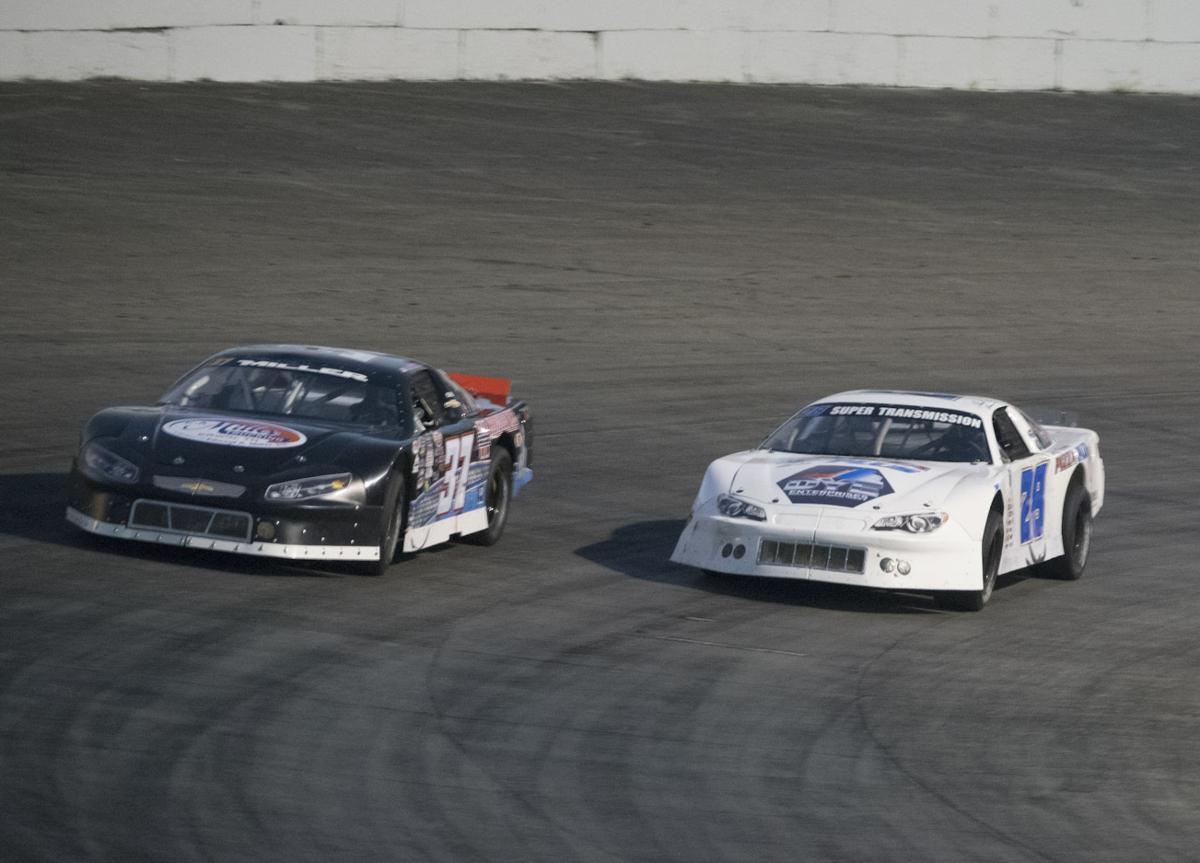 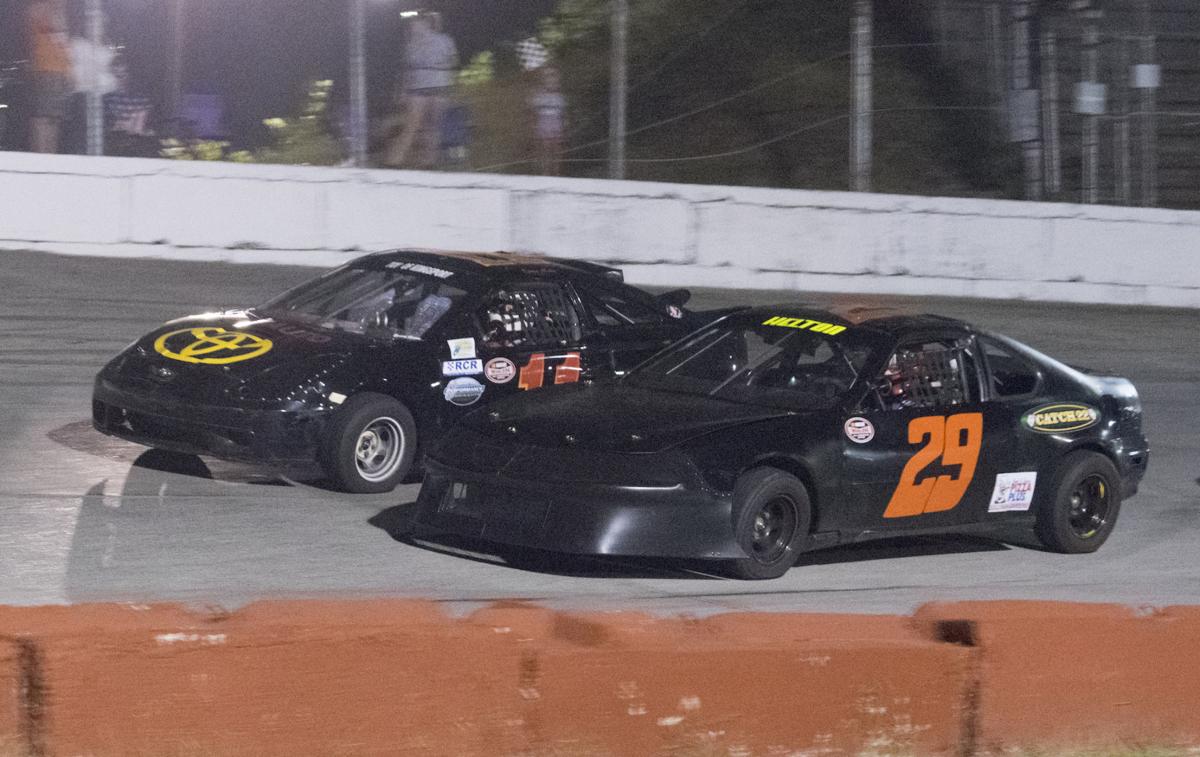 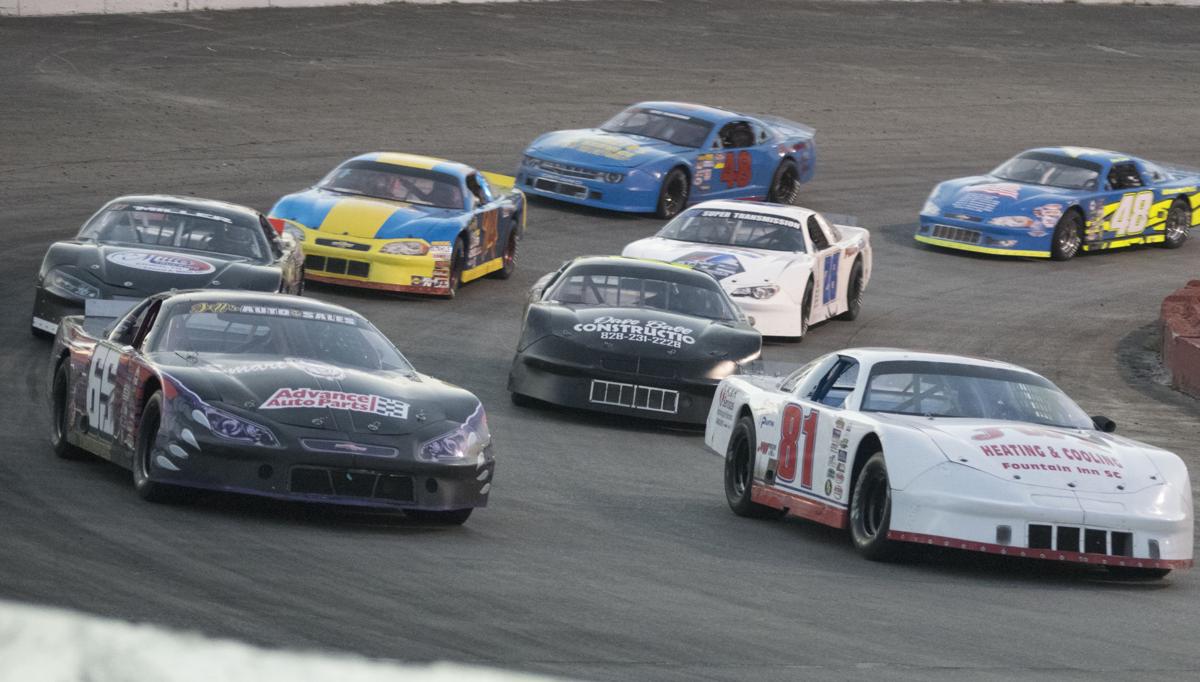 Josh Goble (65) and John Gallman (81) lead the field at the start of Saturday's Limited Late Model feature at Kingsport Speedway.

Ashton Higgins (9) goes to the inside of Clint King (07) during Saturday's Southeast Super Trucks race at Kingsport Speedway.

Josh Goble (65) and John Gallman (81) lead the field at the start of Saturday's Limited Late Model feature at Kingsport Speedway.

For a second straight year, Derek Lane ended his Kingsport Speedway season with a victory.

Lane, a Kingsport driver in the No. 28 Chevrolet, held off pre-race favorite Lee Tissot to win a 75-lap feature in the SEST Limited Late Model Series.

A regular competitor at his hometown track, Lane started fifth in the race. He drove his fast car to second by lap 20 and passed Alan Rich for the lead on lap 26 in a bizarre twist as Rich’s motor blew in the No. 37 Chevrolet owned by Erwin racer Alex Miller.

Tissot fell back eight laps later when he cut a tire and spun his No. 27 Chevy. He moved back to the runner-up spot on lap 50, but he wasn’t able to do anything with Lane in the lead.

It was the second straight year that Lane won the SETS Limited Late Model feature in the season-ending race for Kingsport’s 3/8-mile concrete oval.

“I raced against Lee up here my first year in 2015,” Lane recalled. “I remember running side-by-side with him and I learned a lot from him. To beat him in his home series at a track we’re both familiar with, I’m extremely happy with the way the night went.”

Tissot, from Asheville, N.C., came into the event with a five-race winning streak dating back to the series’ first visit to Kingsport in July. He felt sick throughout the day, but gutted it out to finish a second behind Lane.

“It was a good race. Derek runs up here every week. He ought to win,” Tissot said. “We had a flat, got it fixed. It didn’t cost anything and we ended up second.”

Royce Peters of Kingsport finished third in his No. 48 Camaro. Josh Goble and Brett Bare rounded out the top five. Peters, who won the final race of the season for the NASCAR Mod Street division the previous Friday, wanted to double up in the SEST race.

“We worked on the car, had to go to the back of the field and worked our way up to third. We can live with that I guess,” Peters said. “If you aren’t winning, it’s not what you want, but it’s a pretty good run.”

Ashton Higgins captured the win in the Southeast Super Trucks 75-lap feature after his black No. 9 Ford forced leader Clint King’s No. 07 Ford up the track and into the wall.

King, who led the race from lap 6 until the final lap, wasn’t happy with the teenage driver from Weaverville, N.C., afterward.

“He doesn’t have the talent to pass anybody. I don’t think he’s ever passed me without wrecking me,” said King, who finished third. “He spun me out the first race I ever ran with the series and he killed my truck tonight.

“We had a great battle and that could have been a good photo finish. I could have lived with it if he had just beat me. Now, I know he doesn’t have enough talent to pass me and just wrecks people. Our truck is junk, my team is trying to fight, just another night at the short track.”

It was the second win of the season for Higgins, who saw it from a different perspective.

“I had been trying to get under him all night and he didn’t give me a lot of room to work with,” Higgins said. “I got to his left rear in (turn) three. I definitely meant to get him a little loose. We doored, he came down and I guess he expected me to let him run me all the way down to the inside fence.”

DJ Canipe, a Bandolero national champion from Shelby, N.C., made a late pass of Tyler Lester to win the Legends feature. Todd Duff was the winner in the Carolina Vintage class for older model cars.