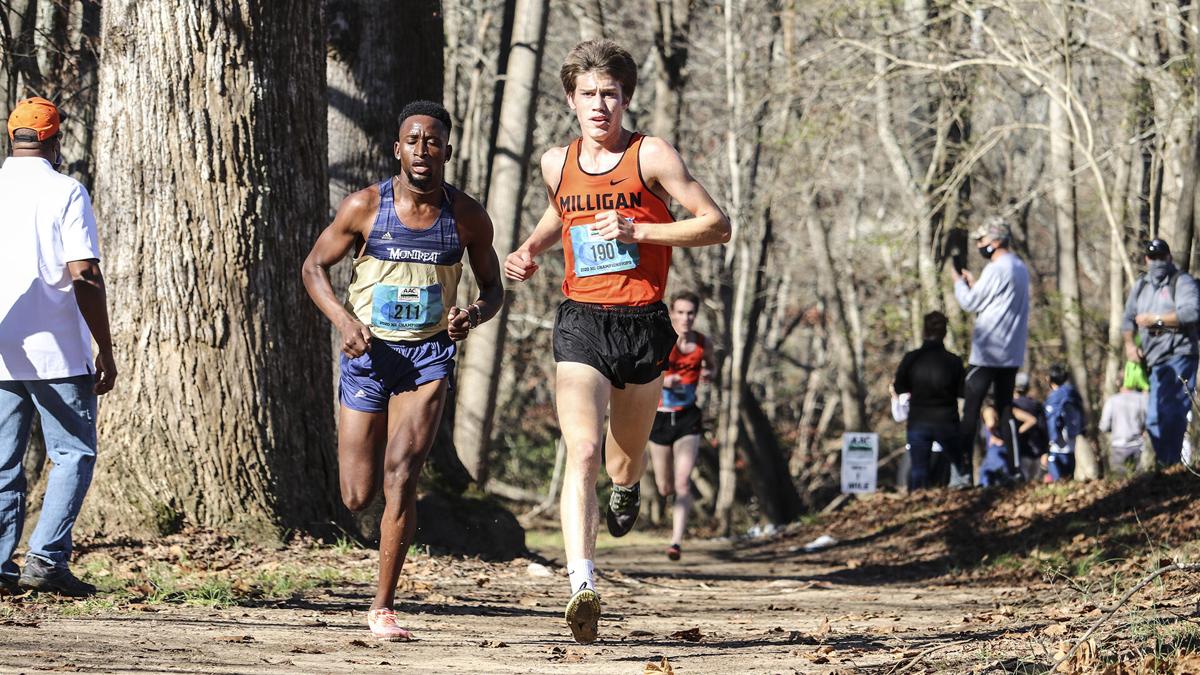 Milligan’s Aaron Jones runs in the lead at the AAC championships. The former Science Hill star won the conference individual title and helped the Buffs claim the team crown. 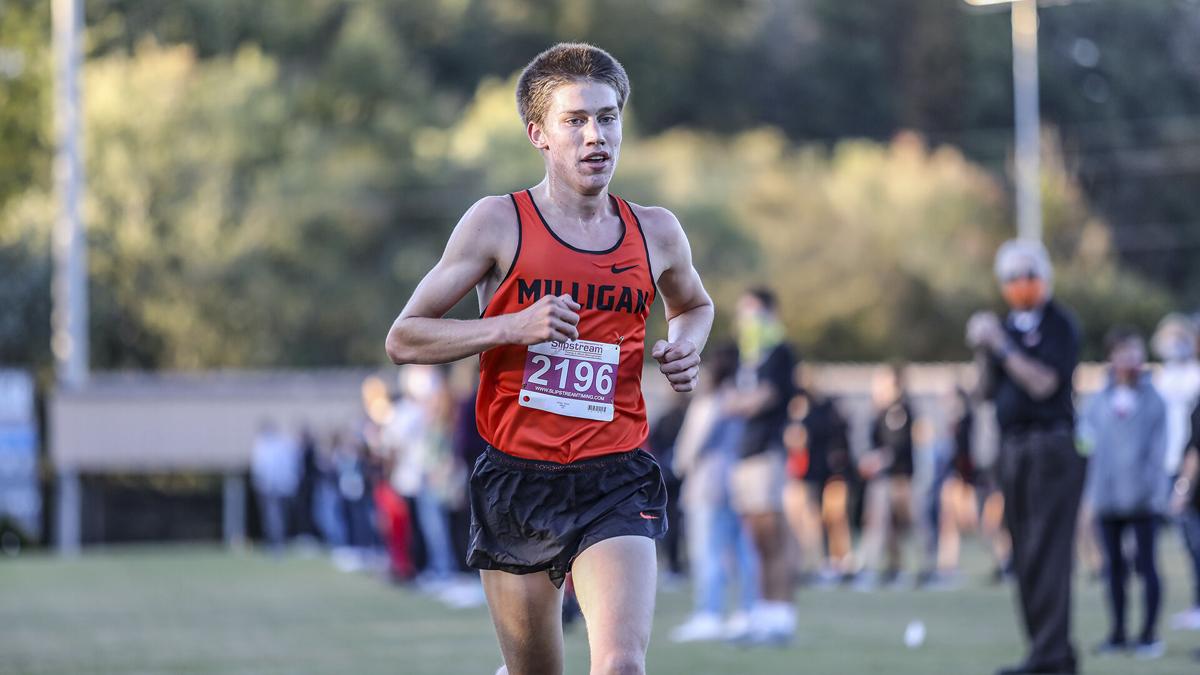 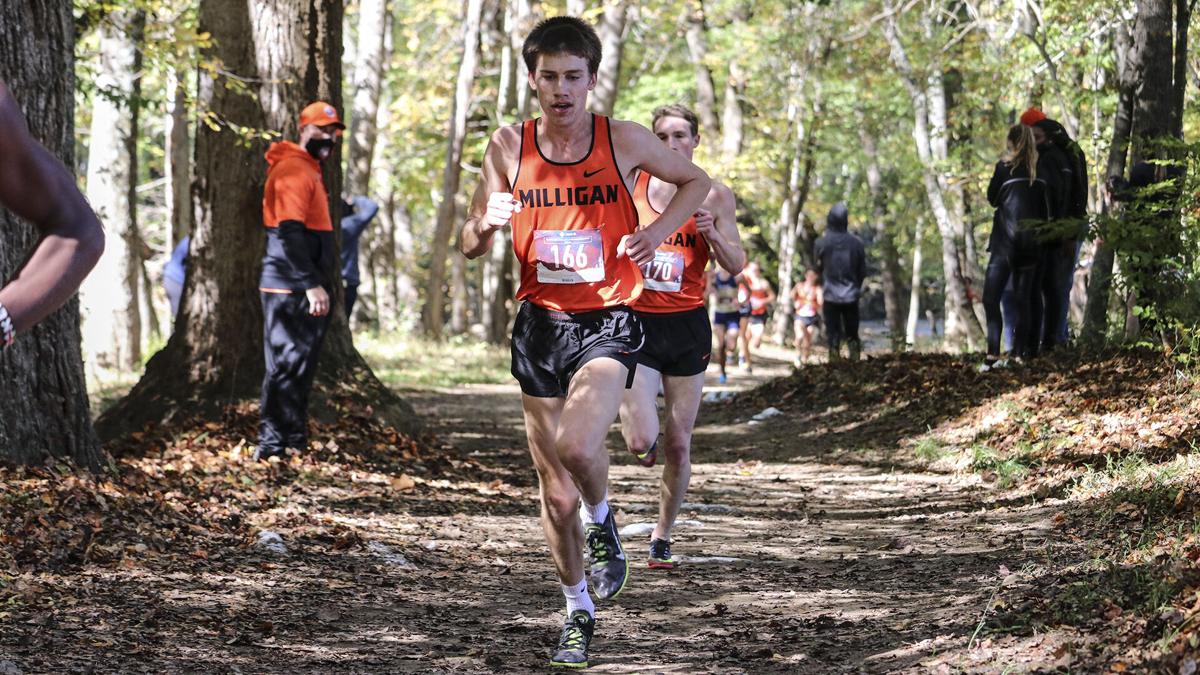 Milligan’s Aaron Jones runs in the lead at the AAC championships. The former Science Hill star won the conference individual title and helped the Buffs claim the team crown.

Not even longtime Milligan cross country coach Chris Layne would have believed Aaron Jones’ transition would be so smooth.

The former Science Hill all-state runner burst onto the scene and capped off the fall with the Appalachian Athletic Conference individual title over the weekend in Swannanoa, North Carolina.

Jones traversed the 8-kilometer course in personal-best 25:10.94 and helped lead the No. 9 Buffaloes to the team title. He won the race by 36 seconds over Montreat’s Moses Dirane (25:46). The Cavaliers were a distant second in the team standings, finishing 19-47 behind Milligan.

“I knew at the preview meet that I had the fitness to keep pushing in the final miles of the race,” Jones said. “I just had to gut it out and when I made the move, I went for it.”

Said Layne, “The transition being so smooth from high school to college speaks to what kind of kid that he is. He’s smart and he has a great work ethic. We knew that we were getting an impact guy when Aaron came on board because he wasn’t over-coached.”

To say that Jones’ first go-around was good would be an understatement.

In addition to his AAC title, he has finished in the top three in seven races this season and has helped guide the Buffs to six consecutive team wins.

“This is hands down the best men’s team we’ve ever had,” Layne said. “We’ve got an indoor 3,000 meter national champion (Nathan Baker) and an indoor national mile runner-up (Tim Thacker) running second and third for us. We’ve got a transfer that finished in the top 50 of the SEC championships last year running as our fifth. I can’t wait for this team to line up for the national championships in April, to be completely honest.”

Jones added, “The team has such an amazing culture. Yes, the workload is a lot more in college because the race is further, but with the way I’m running, it feels like I’m doing a whole different sport from what I did in high school.

“I’ve had some workouts already that I would have considered my better races at Science Hill.”

Earlier in the season, Jones garnered NAIA National Runner of the Week honors for winning the conference preview meet in 25:30. He became the first Buff runner to win the cross country weekly honor since Hannah Segrave in October 2015.

Milligan not only won the men’s team title, but the women pulled off the victory as well. The No. 5 Lady Buffs were led by junior Avery DeWolf getting the individual title and placing six in the top 12.

Milligan’s 25 points were easily ahead of No. 17 Montreat’s 44 and DeWolf won the race by 15 seconds. It was the first time since 2015 that Milligan swept both the men’s and women’s team titles.

“I was honestly more amped that we won the team title than my own individual win,” Jones said. “Like I said before, the culture here is what makes this program so great.”