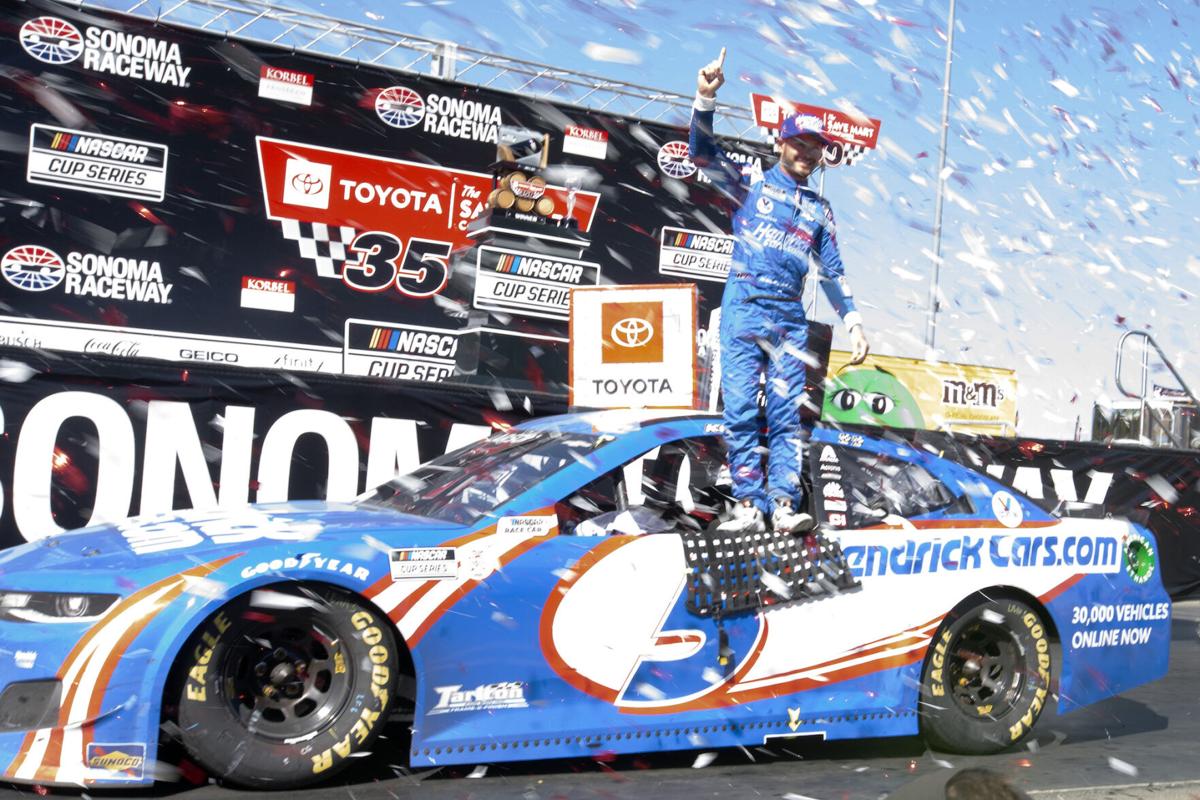 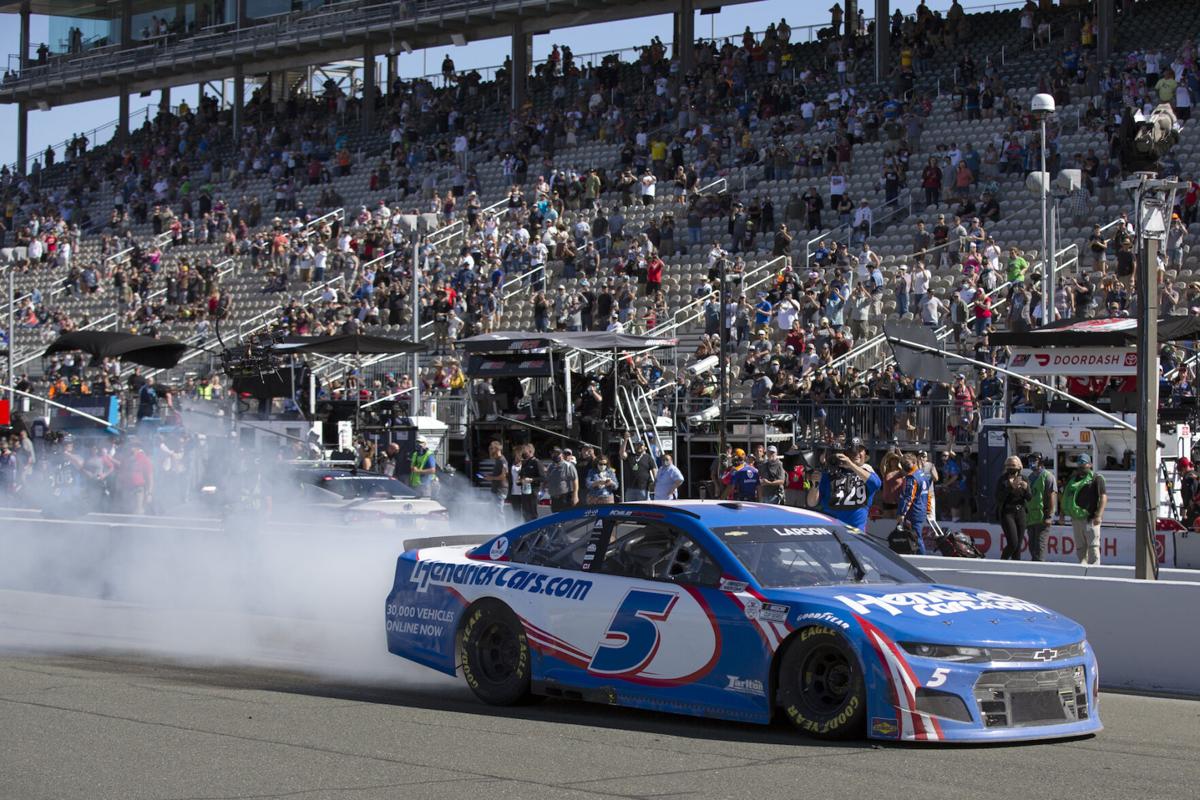 Kyle Larson (5) burns out in front of the grandstand after winning a NASCAR Cup Series race, Sunday, June 6, 2021, at Sonoma Raceway in Sonoma, Calif.

Kyle Larson (5) burns out in front of the grandstand after winning a NASCAR Cup Series race, Sunday, June 6, 2021, at Sonoma Raceway in Sonoma, Calif.

Two wins and three runner-up finishes over the last month.

Kyle Larson’s recent run would be a great season for most NASCAR Cup Series drivers. Add in two wins in winged sprint cars, a third-place finish in dirt late models and it’s an incredible month that drivers dream of.

Of course, this is the same driver who won 46 races in 97 dirt-track starts after his suspension from NASCAR in 2020.

To do it at the peak of his career, Larson is carrying on a tradition of drivers like Stewart and A.J. Foyt the generation before. One wonders how much better Larson would be an IndyCar as opposed to Jimmie Johnson in the twilight of his career.

Working with Cliff Daniels, Johnson’s former crew chief, Larson has certainly elevated the performance of the No. 5 team. A friend of mine, who is a huge Larson fan, gave the perspective of he’s the perfect age, has the best equipment and is super focused.

There’s no doubt the Hendrick Motorsports Chevrolets are the best on the circuit right now, leading a frustrated Kyle Busch to comment, “We’re best in class,” after finishing behind Larson and Chase Elliott in the Coca-Cola 600.

After Hendrick Motorsports and Chevrolet struggled much of the last five years, Elliott had his late-season surge to win the 2020 Cup Series championship. Over the past few weeks with Hendrick working with Richard Childress Racing on engines, the cars have produced incredible horsepower.

Larson and Elliott are leading the charge with 1-2 finishes in the last three races. At Dover, the team recorded its first ever 1-2-3-4 finish in Alex Bowman, Larson, Elliott and William Byron. The four drivers have combined for seven wins in the first 16 races of the season.

The scary thing for the rest of the Cup Series is the youth of this group. Larson, 28, is the oldest of the group, a few months older than Bowman. Elliott, in his sixth Cup Series season, is just 25 while Byron is the youngest at 23.

While Elliott is the defending NASCAR champion, Larson is the man to beat at the moment. He even drove away from road-course masters Elliott and Martin Truex Jr. at Sonoma. After this weekend’s NASCAR All-Star Race in Texas, the Cup Series heads to Nashville Superspeedway for the Ally 400 on Sunday, July 20.

Looking ahead, there are some tracks that would appear suited for Larson to continue his recent dominance. There is Atlanta, a place where he led 269 laps before Ryan Blaney ran him down in the final laps.

However, it’s hard for any driver or any organization to stay on top for a long stretch. Kevin Harvick and Denny Hamlin, who combined to win 16 races last season, are still looking for their first wins in 2021.

A disturbing trend is taking place at many race tracks, locally and across the country. In an effort to get closer to the action, many folks will lean against the fence or stand next to the infield walls.

There was a close call last week at a local short track when a car hit the block wall coming off turn 4. One of the heavy blocks, an estimated 1,000 pounds, fell from its perch — missing a lady by a foot.

The track’s announcer reminded those in the infield to keep their heads on a swivel. That’s good advice, but the standard for most tracks is to stand at least six feet away from the wall.

During the races, track officials are too occupied with the action on the track to constantly police those leaning on fences and walls. I’ve been guilty of it as well, trying to get as close as I can to get that right photo.

There is an assumed risk attending any motorsports event. The Charlotte Observer posted a comprehensive report in 2014 that 523 deaths had occurred in U.S. auto racing over the past 25 years.

Two of every three of those happened at the short tracks and 47 deaths were spectators. At the dirt tracks, you often feel the wind against your face and the dust cover you as the cars speed by.

All it takes, however, is one part flying off the car or two cars getting tangled up and one hurtling toward a wall for a spectator to get seriously injured or killed. While it’s tempting to get that rush of being so close to the action, please use common sense at the race track.

Lucas Vance from Roan Mountain was also on a Yamaha to finish second in the 450C race. Noah Roy from Jonesborough won the 85ccD Beginner race, while Limestone’s Aiken Milhorn was second in 65ccD Beginner and Johnson City’s Tianna Holsclaw was the 51cc Beginner runner-up.

Kingsport Speedway has its NASCAR Advance Auto Weekly Series program scheduled for Friday night. The Late Model Stock headlines the program with races also for the Sportsman, Mod 4, Pure 4 and Pure Street classes. Grandstands open at 5 p.m. with practice, qualifying followed by racing on the 3/8-mile concrete oval at 8 p.m.

Lonesome Pine Raceway in Coeburn, Virginia, has a full program also slated for Saturday night — with racing to start at 6 p.m. The Limited Late Models highlight action on the 3/8-mile asphalt track.

For the drag racing enthusiasts, Cherokee Race Park has an IHRA Summit SuperSeries points race scheduled for Saturday. There is a test-and-tune session on Friday.