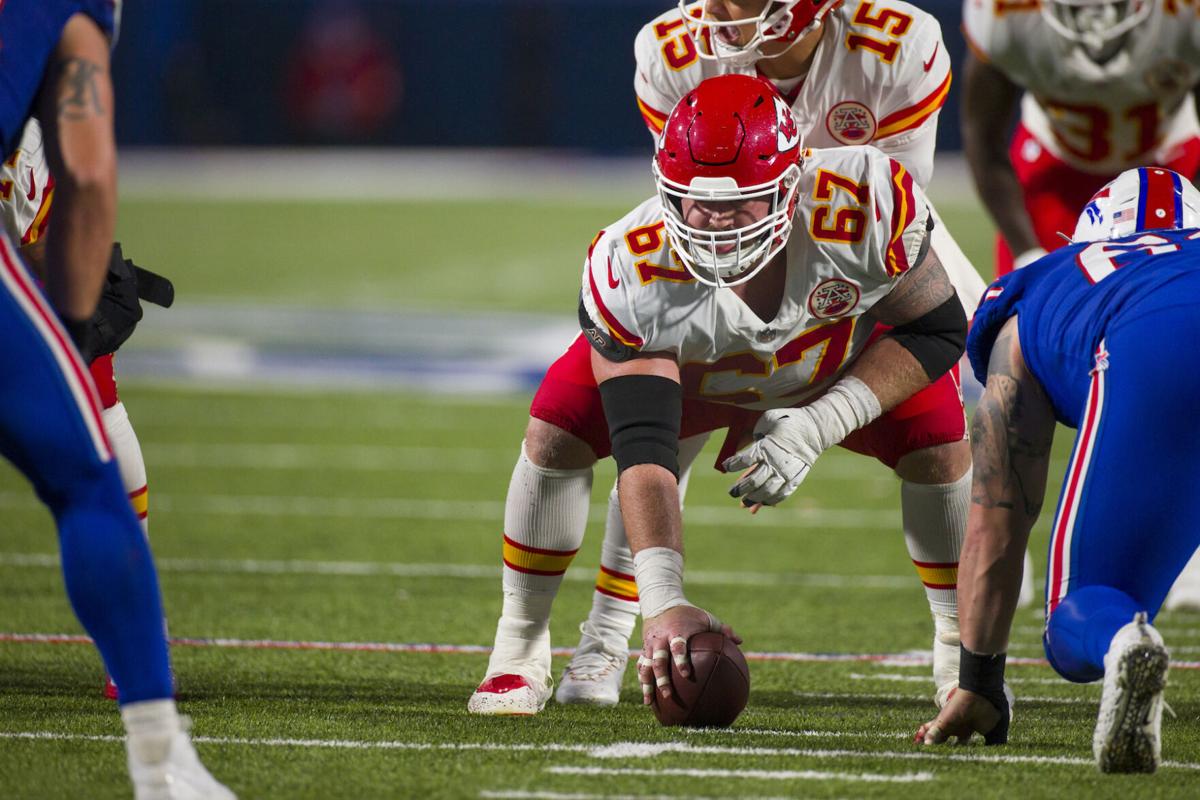 Kansas City Chiefs center Daniel Kilgore (67) readies the snap during the second half of an NFL football game against the Buffalo Bills, Monday, Oct. 19, 2020, in Orchard Park, N.Y. 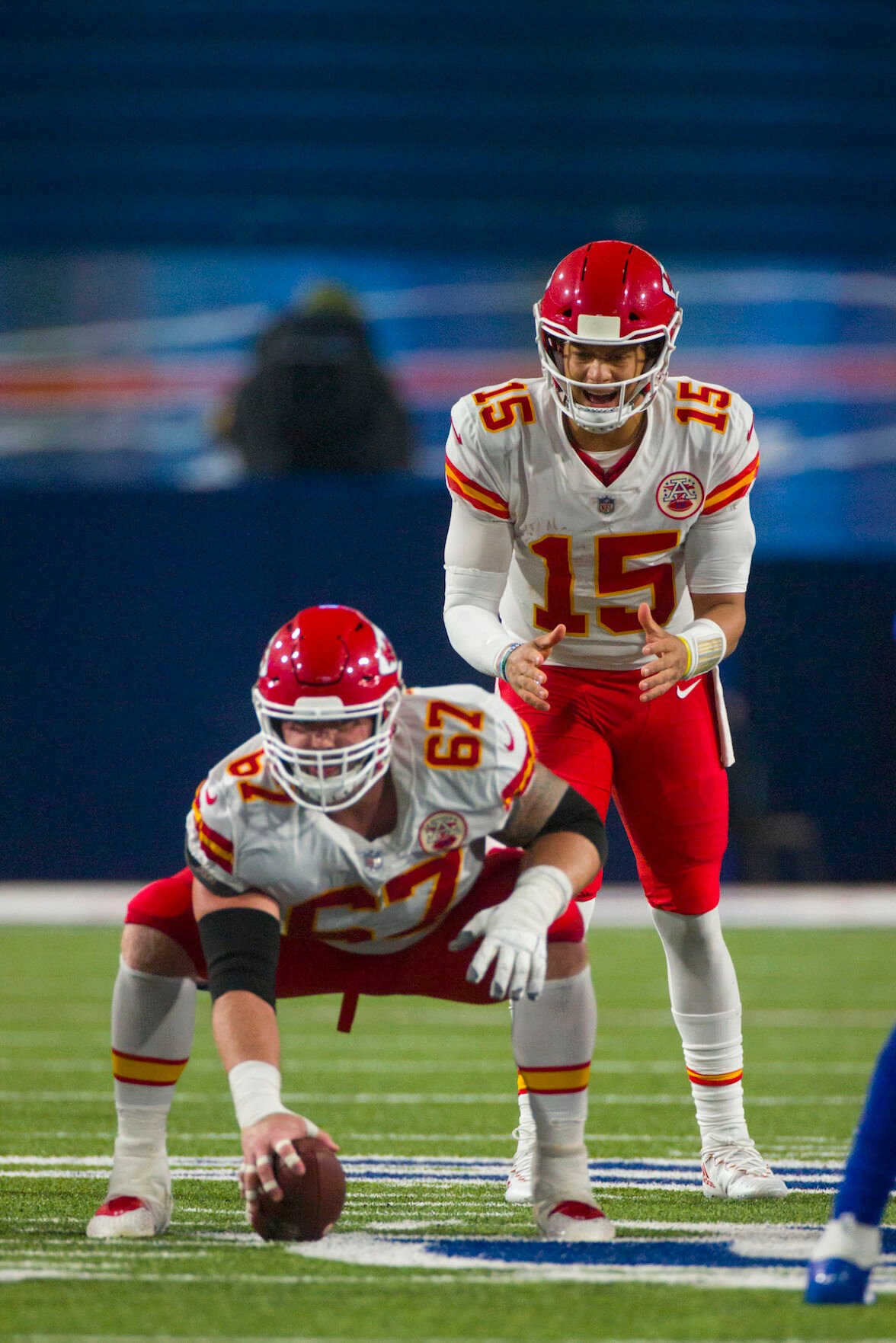 Kansas City Chiefs quarterback Patrick Mahomes (15) waits for the ball behind center Daniel Kilgore (67) during the second half of game against the Buffalo Bills on Oct. 19. 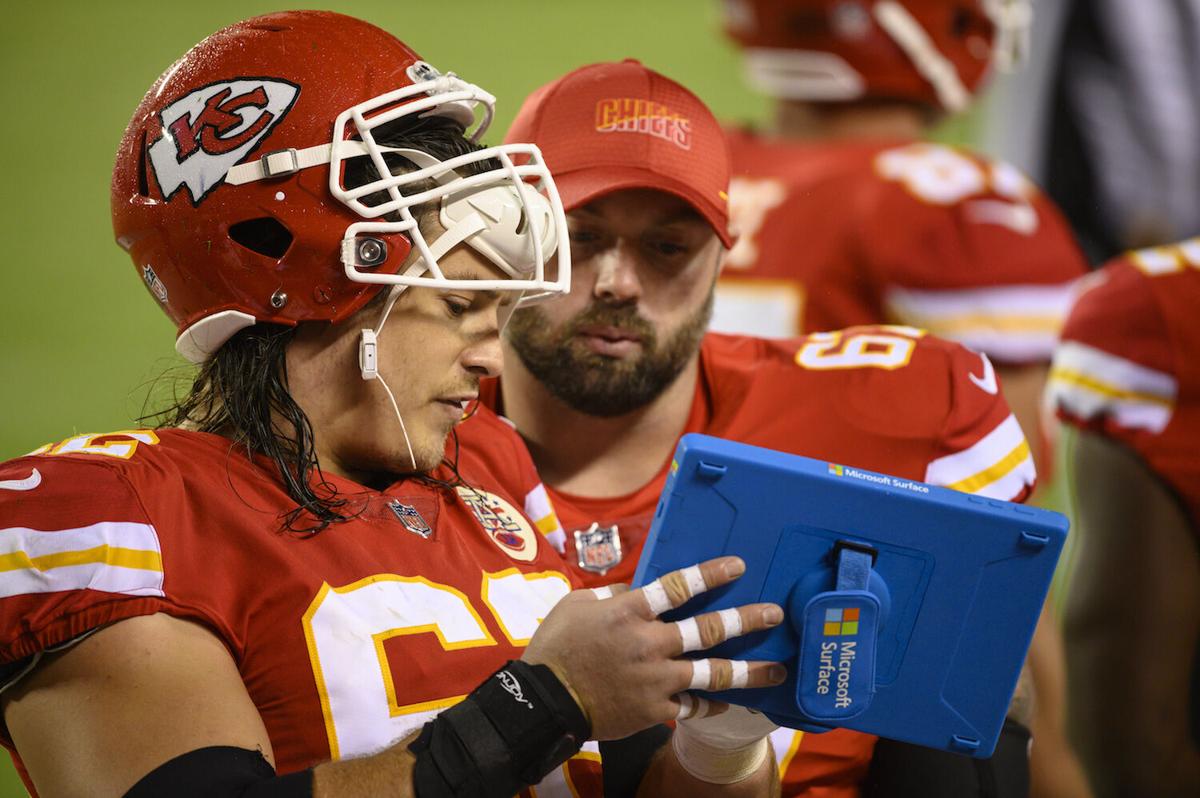 Kansas City Chiefs linemen Austin Reiter (62) and Daniel Kilgore (67) confer during a game against the Houston Texans on Sept. 10.

Kansas City Chiefs center Daniel Kilgore (67) readies the snap during the second half of an NFL football game against the Buffalo Bills, Monday, Oct. 19, 2020, in Orchard Park, N.Y.

Kansas City Chiefs quarterback Patrick Mahomes (15) waits for the ball behind center Daniel Kilgore (67) during the second half of game against the Buffalo Bills on Oct. 19.

Kansas City Chiefs linemen Austin Reiter (62) and Daniel Kilgore (67) confer during a game against the Houston Texans on Sept. 10.

Daniel Kilgore wasn’t about to sign with an NFL team for the 2020 season unless the right situation came along.

Boy, did it ever.

The Dobyns-Bennett and Appalachian State alumnus signed with the defending Super Bowl champion Kansas City Chiefs on Aug. 27. After head coach Andy Reid gave the 10-year NFL veteran extra time to physically and mentally prepare for the season, Kilgore has now taken over as the Chiefs’ starting center in an offense averaging over 31 points per game.

Kilgore, 32, who played in Super Bowl XLVII with the San Francisco 49ers, is relishing the success. It’s particularly sweet after the Miami Dolphins, the team he played for the last two seasons, told him he was too old to play center for them.

WHAT WERE YOUR THOUGHTS WHEN THE CHIEFS CALLED?

Kilgore: “I was in the Tri-Cities, the longest I had been home since before my days at App State. I was really enjoying my time off, the spring and summer, being a free agent and not worrying about anything. Closer to training camp, once teams started to practice, they finally saw what they had as far as talent.

“A few teams called and I turned them down. I told my agent that it had to be the right situation. The Chiefs kept calling and I told them my wife and I just had our second daughter and I needed some time to prepare to play football. They were able to get me in a seven-day window to leave the Tri-Cities and make sure everything was good on the home front.

“I did the training camp in the midst of trying to find a place for my family and also get back in football shape. It happened so fast, but this was that right situation. Not many people turn down the Super Bowl champions with a Hall of Fame coach.”

WHAT’S IT LIKE BEING THE CENTER FOR SUPER BOWL MVP PATRICK MAHOMES, WHO MAKES SO MANY PLAYS OUTSIDE THE POCKET?

Kilgore: “I played in college with a quarterback who scrambled a lot and I played with Colin Kapernick with the 49ers. The past couple of years with (Ryan) Fitzpatrick and (Ryan) Tannehill, they scrambled a bit. But he’s a different breed, a top-tier quarterback in the history of the NFL.

“He’s able to throw the deep ball, read coverages, call protections. Most NFL quarterbacks can’t tell you their offensive protections, but Patrick can tell you everything about the offense, about the defense you’re going to play. It’s great to have, especially coming into a newer system which the team has had eight years in Kansas City. It’s a breath of fresh air with the veteran guys able to make adjustments on the whim.

“Patrick is obviously a gifted quarterback, but an intelligent quarterback as well. Getting to know him since I’ve come out here, he’s been welcoming to me. He loves to golf on the side and is fun to be around.”

HAS COVID-19 MADE IT CHALLENGING SINCE YOU’RE UNABLE TO DO THE THINGS OFF THE FIELD WHERE TEAMS NORMALLY BOND.

“When you’re at work, you’re spending time with each other there. Outside of football, there’s not much going on due to COVID and the risk of getting out in the general public. We keep to ourselves and our families, not to bring anything into the building. Ultimately, it’s a team game and if you test positive, you can bring down other guys with you even if they don’t test positive.

“It’s all about being disciplined, not doing the things you would normally do, like going out to get dinner with the wife on Friday night, but doing a date night at home. It’s tough, but at the end of the tunnel, there’s the prize of the Super Bowl we’re working for. Anything I can do to help us get closer to the Super Bowl, I’m going to do that.”

YOU SAID IT TOOK A FEW WEEKS TO GET BACK IN PLAYING SHAPE. HOW DO YOU FEEL NOW?

Kilgore: “I feel pretty good. I was told in Miami at the end of the year that I was too old and overpaid. It feels good to get out there and run around when I’m supposedly too old.

“I think not having the off-season I normally would have helped me with recovery and getting my body back on track. Football is a year-long sport and I usually don’t have time off. Once I had the mentality this might be a retirement and it took the stress and anxiety away, I was able to focus on my health.

“This is week 8 in a long season. I just have to stay on top of things, on top of my technique and keep building.”

OBVIOUSLY, THE SEASON IS OFF TO A GREAT START FOR THE TEAM, 6-1 AND LEADING YOUR DIVISION. WHAT MAKES THE CHIEFS SUCCESSFUL?

Kilgore: “To win is nothing new to this team and this organization. These guys have won a lot of ball games the past eight years. Coming off the Super Bowl win, they didn’t lose many guys to free agency.

“As a team, there are always things you can get better at — and each week we try to learn from our mistakes. The morale of this team where Andy Reid has always let his players express themselves and be ourselves, there is never a down day in the facility. He always takes care of the players and makes it enjoyable to come to work.

“I would say in the years I played in college and the NFL, the teams that have won the most have the mutual respect with the players and coaches. I say that has a direct correlation to the record at the end of the year. Struggling teams struggle because of the respect on and off the field.”

ON THAT NOTE, WHAT’S COACH REID LIKE TO PLAY FOR?

“Coach Reid is the boss and runs the show. He demands a lot out of his players, but he’s willing to work with his players and wants us to have fun. At the end of the day, we’re all playing a game we love and he doesn’t want you to forget that.

“As a 10-year veteran on a short notice, he felt I deserved that right to take care of my family first. That was nice of him and our general manager, Brett Veach. It has been a great experience. On a personal level, I gained that love of the game and respect again coming to Kansas City.

“I’ve had a few tough years of situations that weren’t the best. Here, it revived that love of the game. Getting that 10th year, that decade in the league, I’m really happy I came here.”