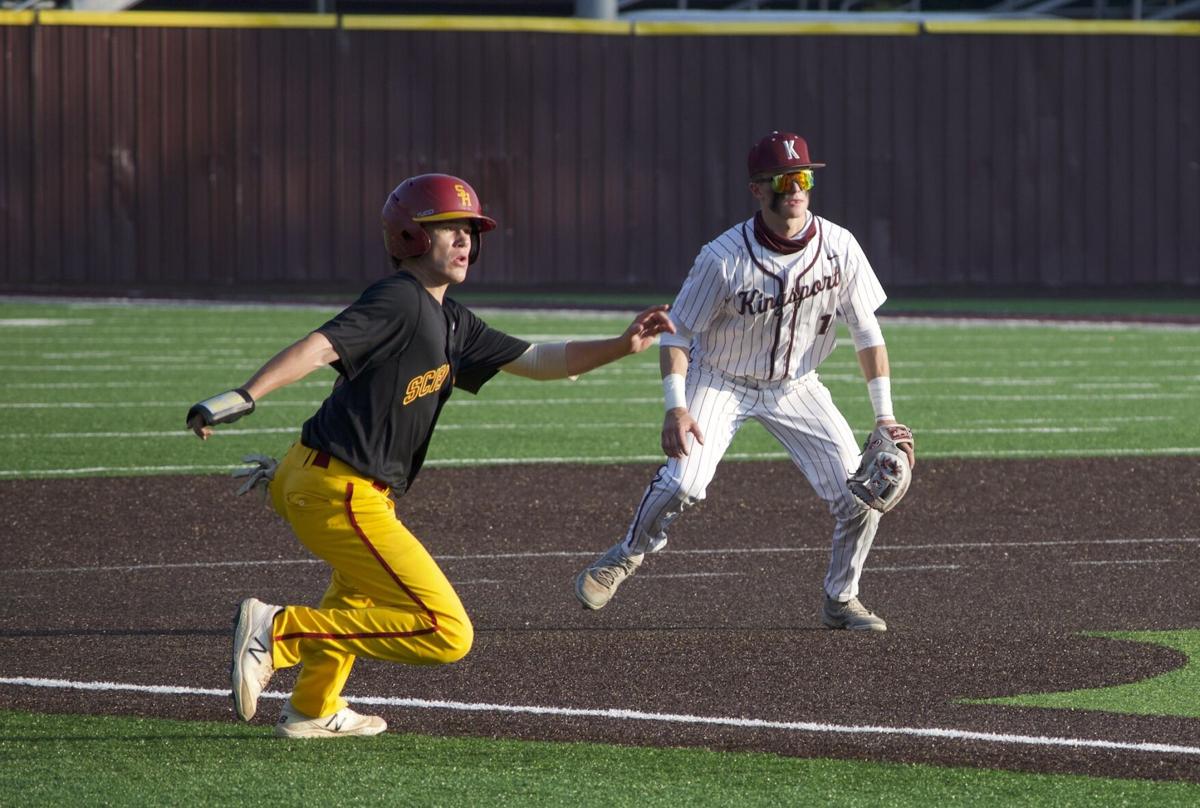 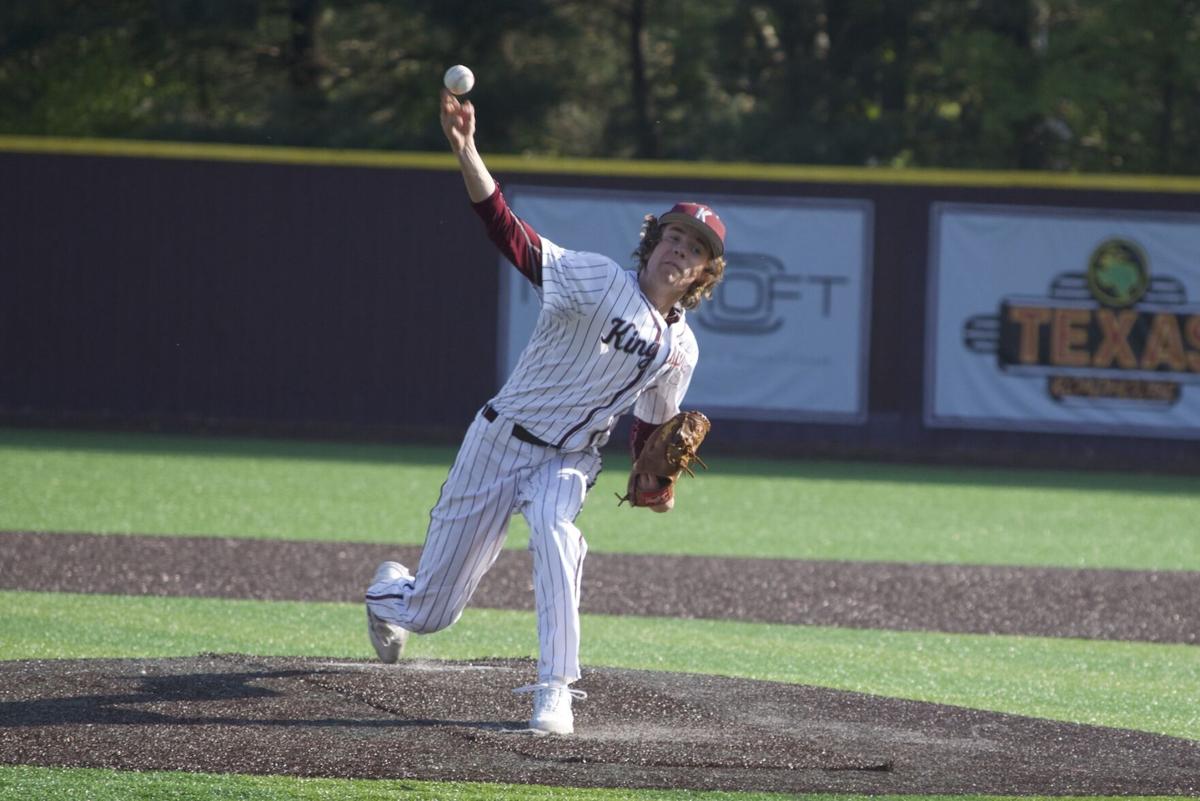 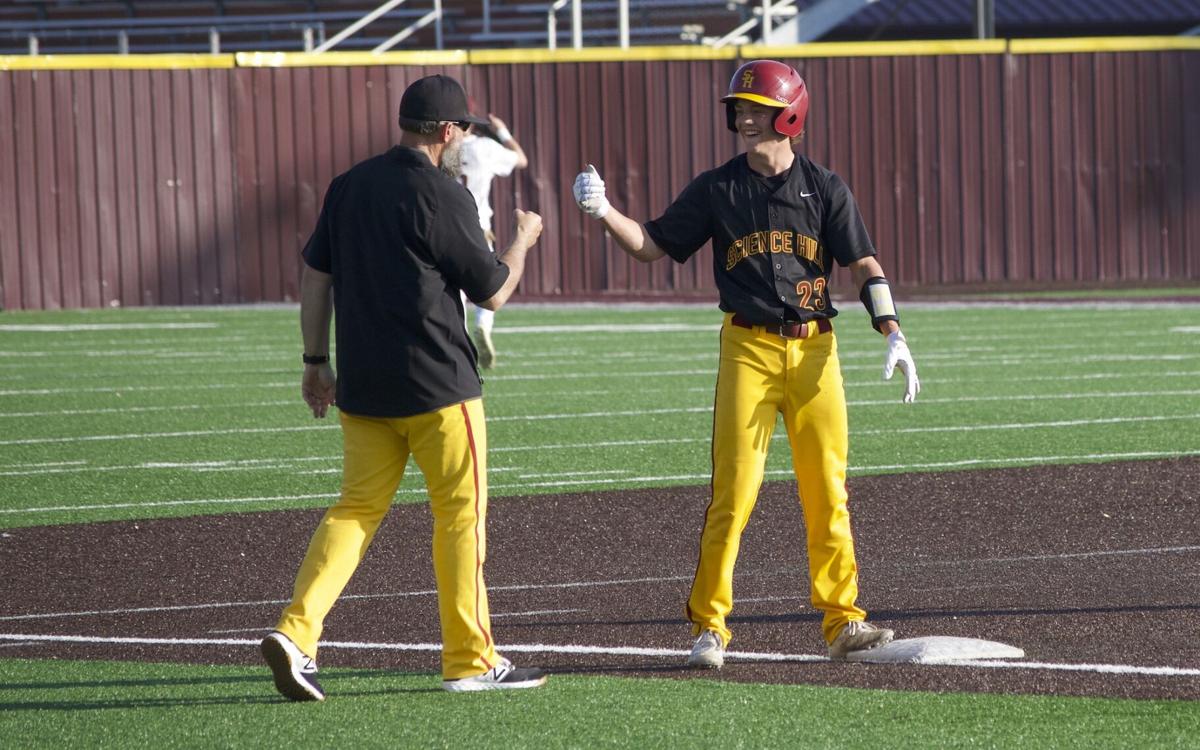 Science Hill’s Jack Torbett is congratulated by third-base coach Andy Wallen after his two-run triple in the third inning. 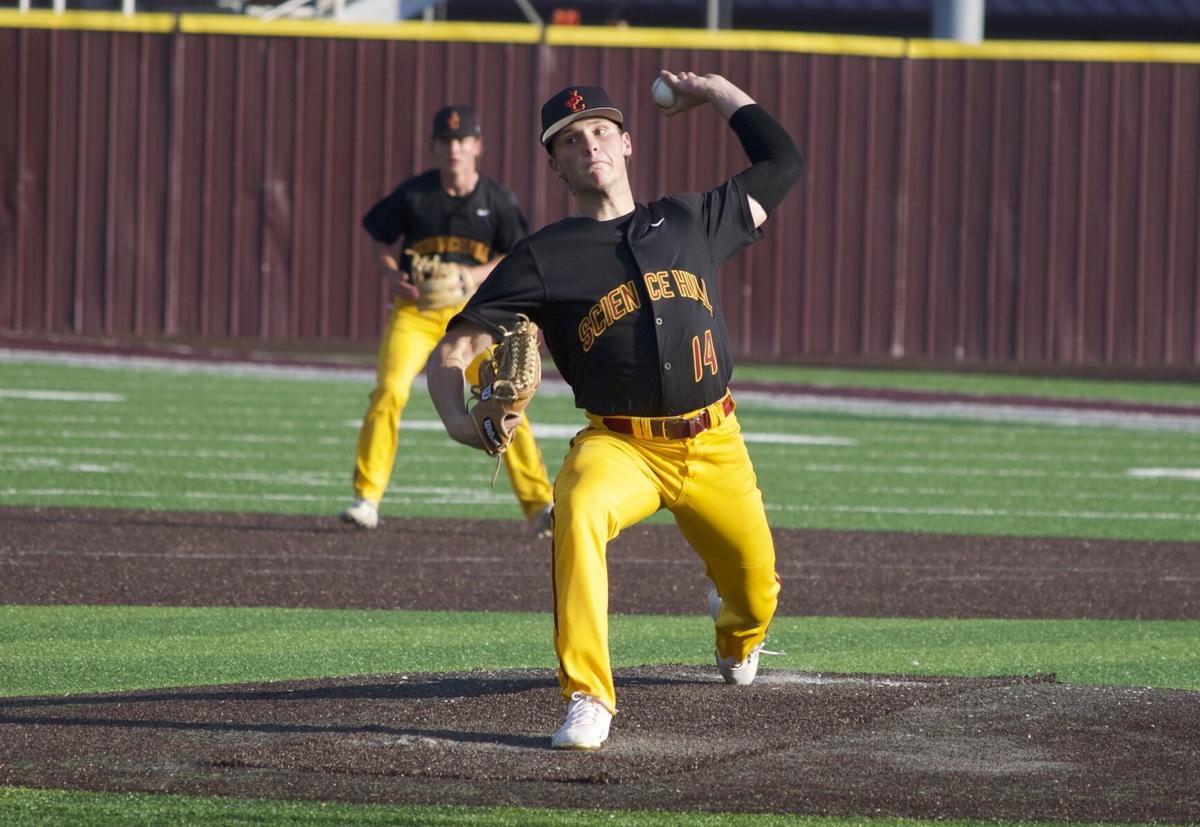 Science Hill starting pitcher Cole Torbett throws a strike in the bottom of the third inning. 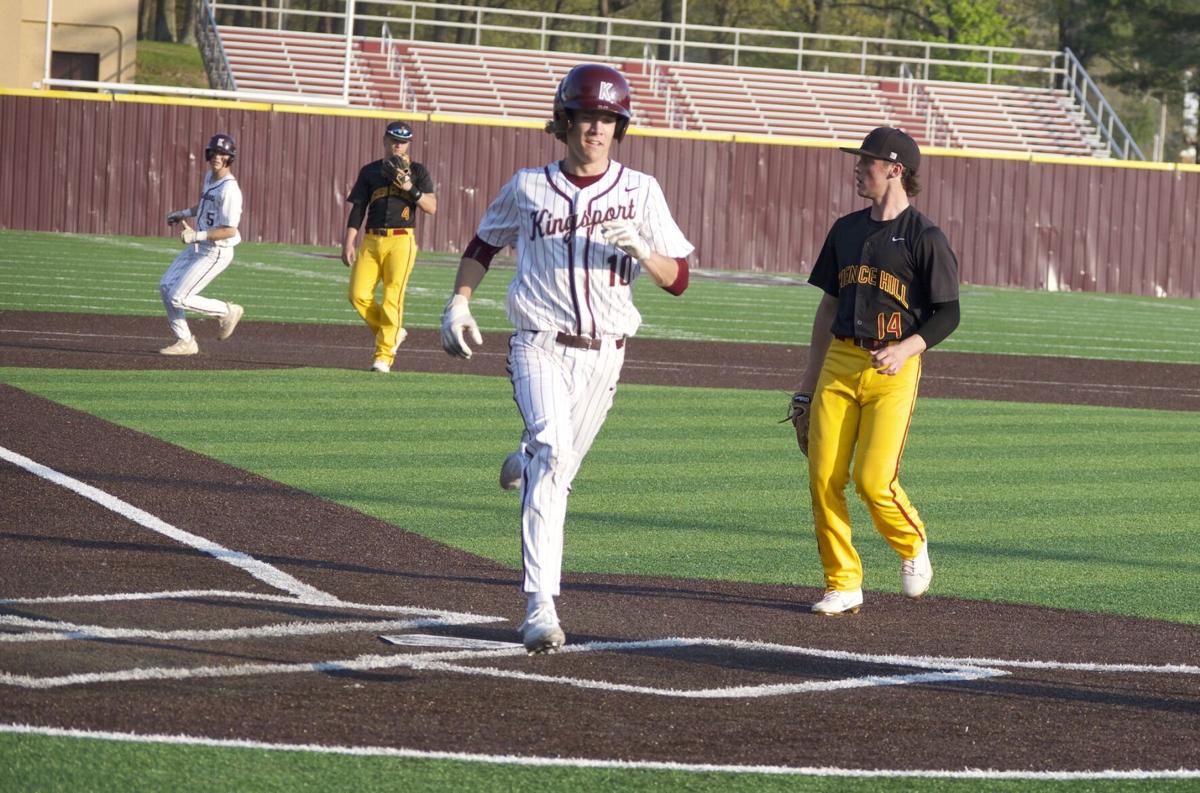 Dobyns-Bennett’s Jake Timbes races home to score in the bottom of the third inning.

Science Hill’s Jack Torbett is congratulated by third-base coach Andy Wallen after his two-run triple in the third inning.

Science Hill starting pitcher Cole Torbett throws a strike in the bottom of the third inning.

Dobyns-Bennett’s Jake Timbes races home to score in the bottom of the third inning.

KINGSPORT — Dobyns-Bennett beat Science Hill at its own game to end the Hilltoppers’ hopes for an undefeated Big Seven Conference baseball season.

Drawing eight walks to go along with eight hits, laying down four sacrifice bunts and hitting three sacrifice flies, the Indians scored a dramatic 6-5 win over the Hilltoppers on Tuesday night at J. Fred Johnson Stadium.

“It was a combination of everything the game is about. There was some small ball, some big hits and big pitches,” Dobyns-Bennett coach Ryan Wagner said. “Neither team had its best pitches tonight, but our guys fought. Jake (Timbes) competed and went 120 pitches. We needed every one to get that strikeout in the sixth inning. Then (Aiden) Byington came on and made the big pitches when he needed them.

Fittingly for Dobyns-Bennett, the team’s only senior, Gage Hensley, laid down a bunt to score Peyton Grimm for the winning run in the sixth inning. Before the game, Hensley had the honor of presenting a special award to Wagner for recently becoming the Indians’ second all-time winningest coach.

“Going into that at-bat, they changed pitchers and Coach Wagner knew there were runners in scoring position,” Hensley said. “He told me to lay it down on the left side and I did that. It’s a big win. Coach Wagner being the second winningest coach, beating Science Hill and this win is big for the conference, too.”

Timbes (5-2) was the winning pitcher. He gave up nine hits and five runs, but hung tough as his team needed him. In the final inning, Byington walked his first two batters, but then settled down for the next three outs.

“You have to know you’re facing one of the best teams in the state. You know they’re probably going to bang you around because all these dudes are playing summer ball and hitting off guys like me all summer,” Timbes said. “They had nine hits, we had eight, but we put the ball in play, had some bunts and played good defense. We did the little things right and it showed.”

Timbes was a force at the plate, getting two hits along with Brady Stump and Tanner Kilgore. Grimm also produced offensively with a hit, two walks and two runs scored.

As for Science Hill, freshman Landon Smelser went 3-for-3 batting in the nine-hole. Jack Torbett drove in three runs, while on the mound Cole Torbett went the first three innings before giving way to Spencer Powell. Gavin Briggs came in for the final 1 1/3 innings.

Four of Science Hill’s nine hits went for extra bases. However, they were unable to get any runs across the last couple of innings despite having bases loaded in the sixth and the two aforementioned runners in the seventh.

“Timbes pitched a really good game and gutted it out. He battled and kept us in check the later innings,” Science Hill coach Ryan Edwards said. “I would have liked to have seen us throw more strikes in situations and eliminated the walks. But credit them for being patient and working into some walks. That’s a really good baseball team over there.

“This conference is a very tough conference. Anybody can win in the district tournament. We’ve got to work on some things and get better.”

Science Hill jumped out to a 3-0 lead in the top of the third off Jack Torbett’s two-run triple and Conner Hyatt’s RBI double. The Indians answered by scoring off a wild pitch and sacrifice flies by Sam Ritz and Turner Stout.

The Hilltoppers pulled ahead by scoring off a wild pitch, followed by Smelser’s RBI double. Once again, the Indians responded. This time, an RBI single by Grimm in the fourth inning and a sac fly by Jack Browder in the fifth knotted the game at 5-apiece.

Facing loaded bases in the sixth, Timbes threw a strikeout to end the threat.

Both teams will face non-conference opponents to get ready for the district tournament. Science Hill starts a four-game stretch by hosting Unicoi County on Thursday night. Dobyns-Bennett heads to Knoxville to face Bearden on Friday.