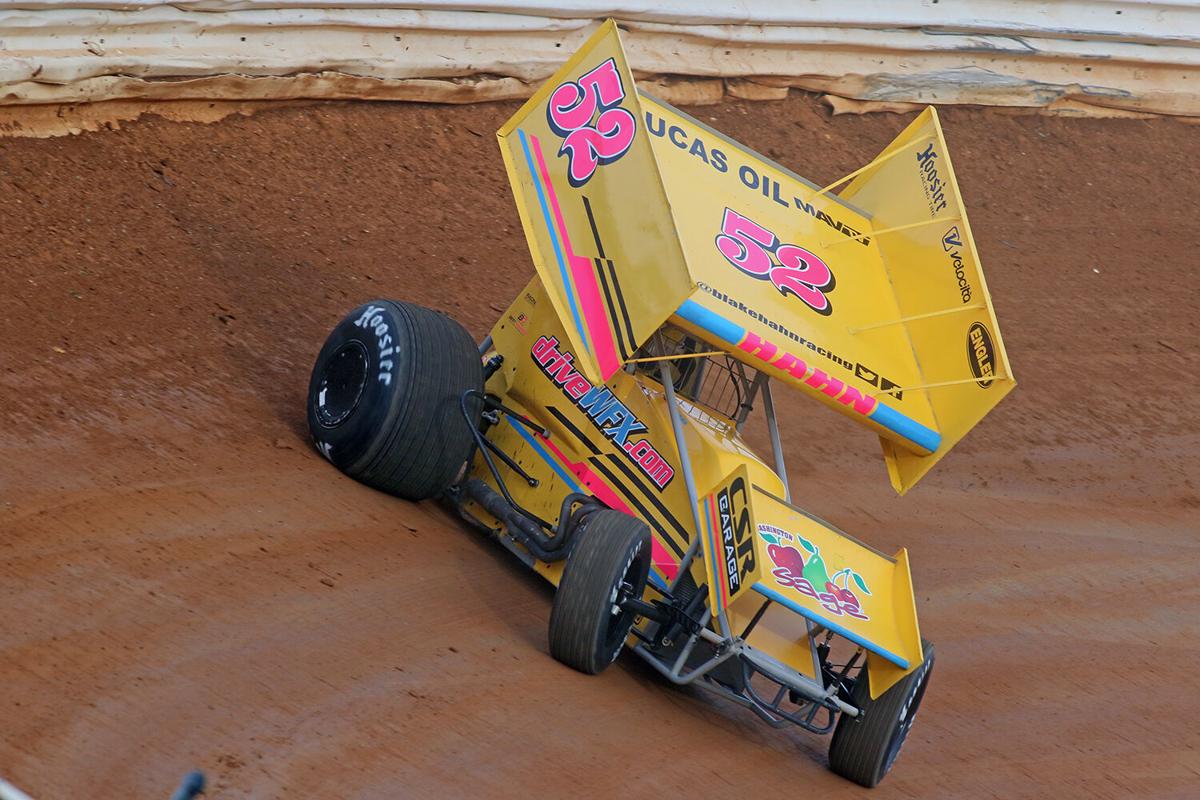 Blake Hahn goes to the high side of the track in turn 2 at Volunteer Speedway. He led all 25 laps of the ASCS Lucas Oil feature. 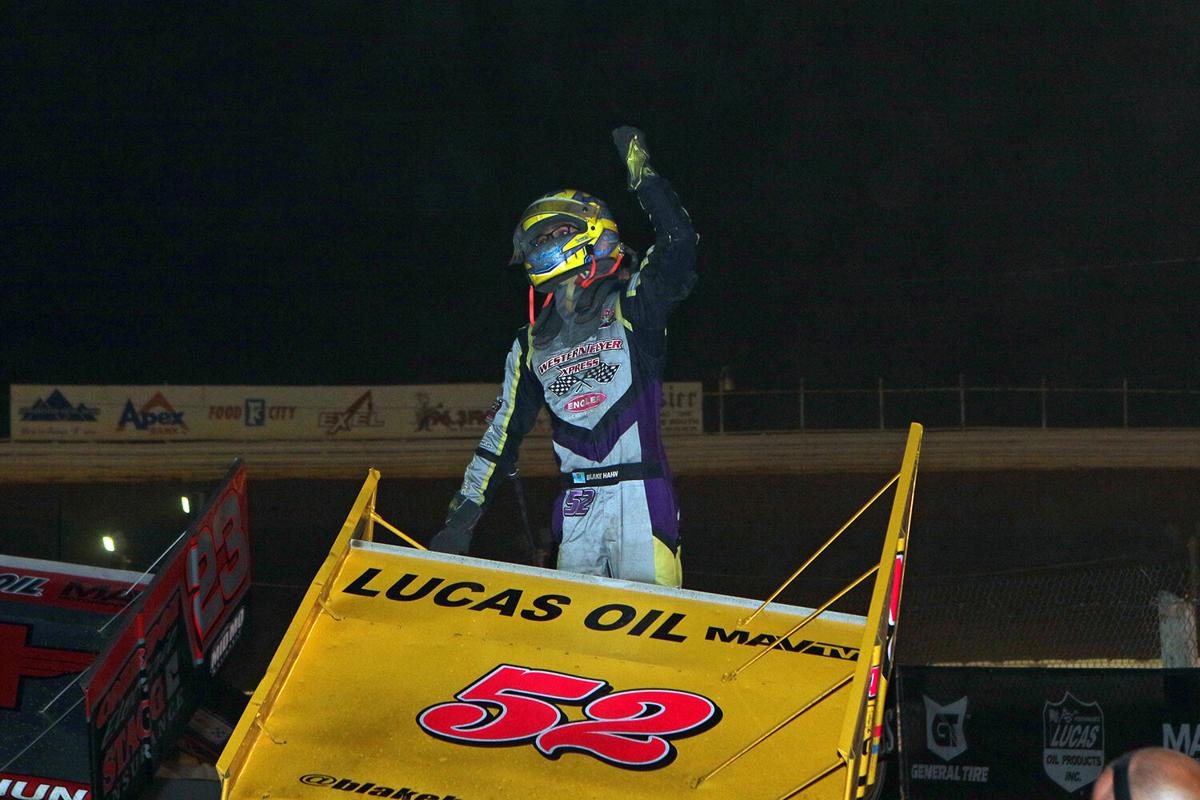 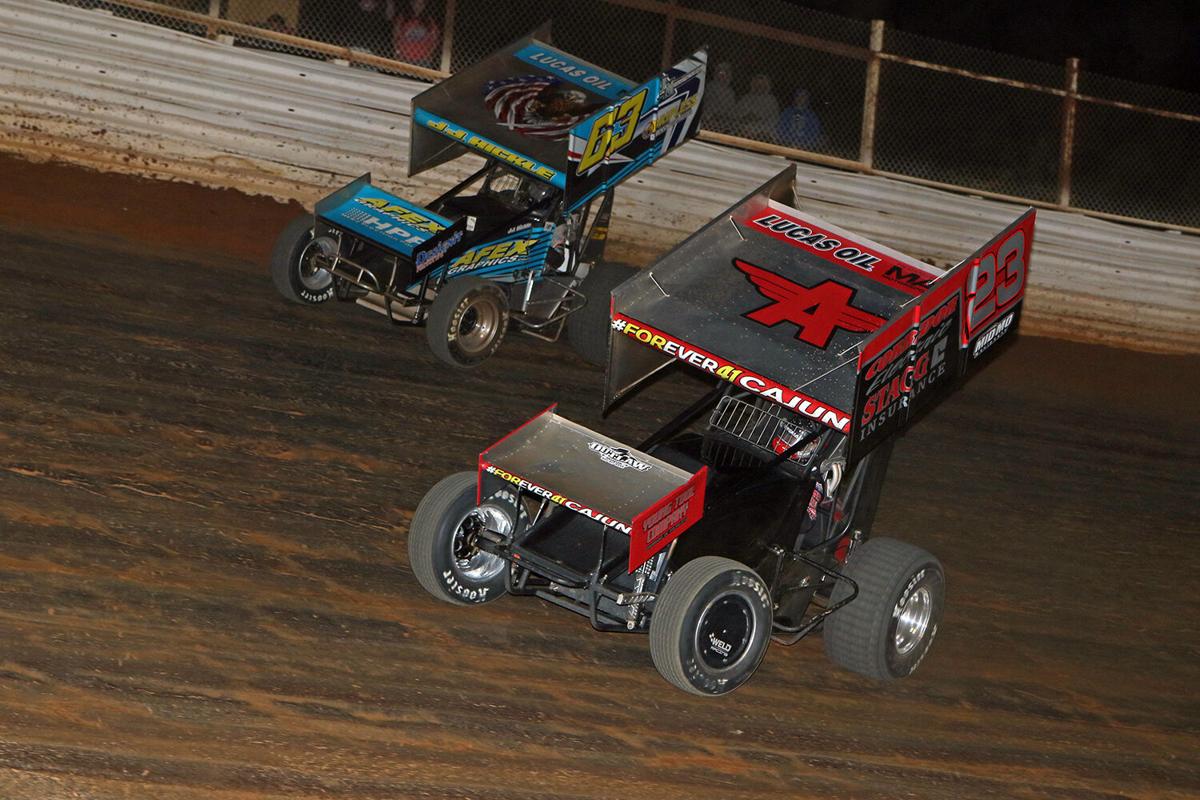 Blake Hahn goes to the high side of the track in turn 2 at Volunteer Speedway. He led all 25 laps of the ASCS Lucas Oil feature.

BULLS GAP — For Blake Hahn, the high line was the fast line around Volunteer Speedway on Saturday night.

The Oklahoma driver led all 25 laps of the American Sprint Car Series Tennessee Spring Nationals. After ripping off a 126-mph qualifying lap around the 4/10-mile Bulls Gap dirt track, Hahn rode the cushion at the top of the track during the A-Main to take the victory.

“The top seemed like where I had to be. There was a lot of moisture and with the high banking, I was able to get some momentum,” Hahn said. “It seemed like to me there was a symmetrical shape to it where I was able to roll around the top all the way around.

“In turns 3-4, it goes to a point right in the middle where the car wants to follow the wall around. You have to turn in the corner so you don’t hit the wall coming off four. It was a blast with these winged cars on this high banking.”

Hahn, driving a bright yellow No. 52 machine, built over a four-second lead before Seth Bergman in the No. 23 cut the margin to a little over a second at the end. One more lap and it appeared the fast-closing Bergman might have something for the leader.

But Hahn hung on for his second win of the season. There was a small field of 11 cars due in large part to travel concerns with the fuel shortage at some gas stations in the Eastern U.S. It didn’t dampen the enthusiasm of the large crowd who came to see the event.

Ballenger in the black No. 29, passed pole sitter Carder Miller for the lead on lap 3 and led the rest of the 25-lap Crate Late Model feature.

Knoxville driver Ross White finished second after a spirited battle with Miller for the runner-up spot.

Gary Crittenden came out on top of a three-way battle for fourth. Josh Henry and Bradley Lewelling took the next two spots.

Rader in the black No. 01 with the Pontiac Firebird emblem on the hood outran Dustin Ratliff to take the Sportsman Late Model feature.

Mason Bare led the early laps before retiring with a mechanical problem. Just like the Crate Late Models, the race featured a strong field of 18 cars.

Atkins drove his black No. 14 Chevrolet Camaro to the win in the Street Stock feature to cap off the action. He was able to slide away from second-place Logan Hickey. Perennial contender Josh Henry finished third with Colby Long and Marvin Green Jr. rounding out the top five.

“It was a tremendous win for us. We’ve been traveling to some big races like Talladega back in January and we were off the pace,” Atkins said. “We’ve been learning more about these Street Stocks since then. We got a new motor. It ran great and our car handled phenomenal. I feel our car steers as good as any of them out there.”