Skip to main content
You are the owner of this article.
Edit Article Add New Article
You have permission to edit this article.
Edit
Home
News
Sports
Obituaries
Living
Photo & Video
Opinion
Classifieds
Send Us Your News
About & Policy
Contact Us
Special Sections
Share This
1 of 8 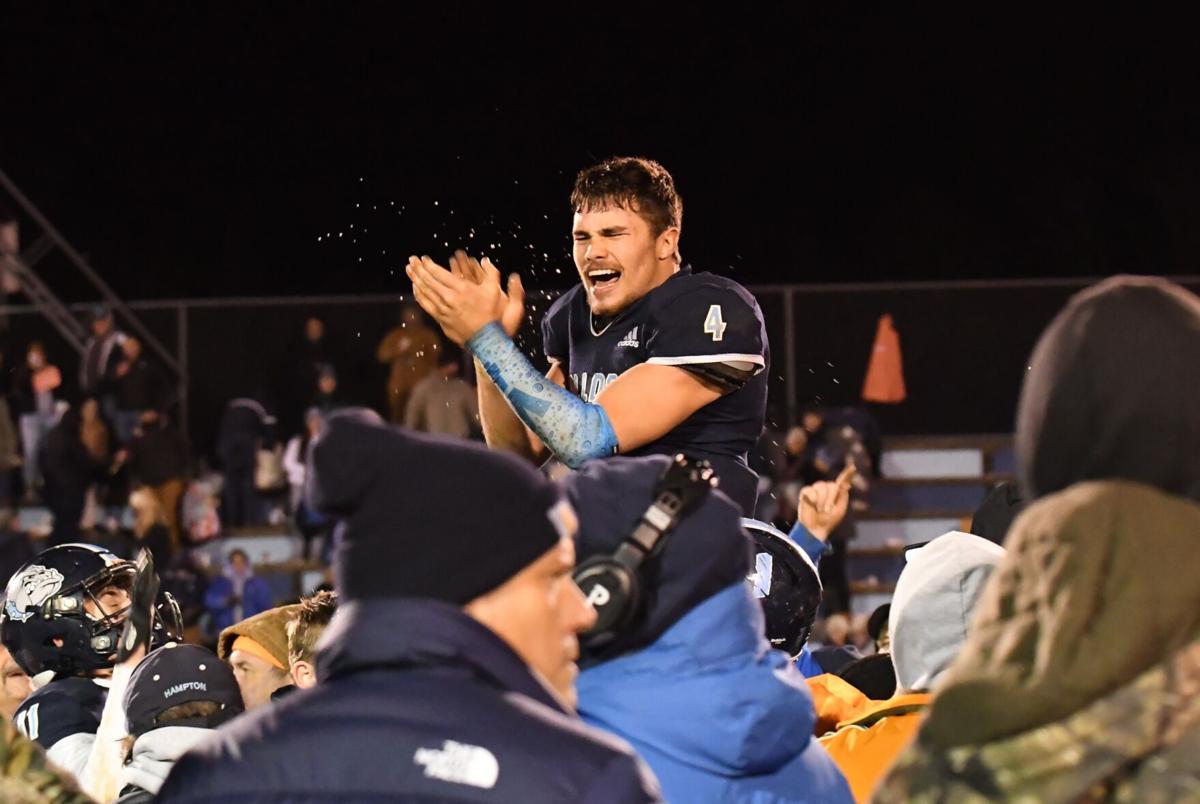 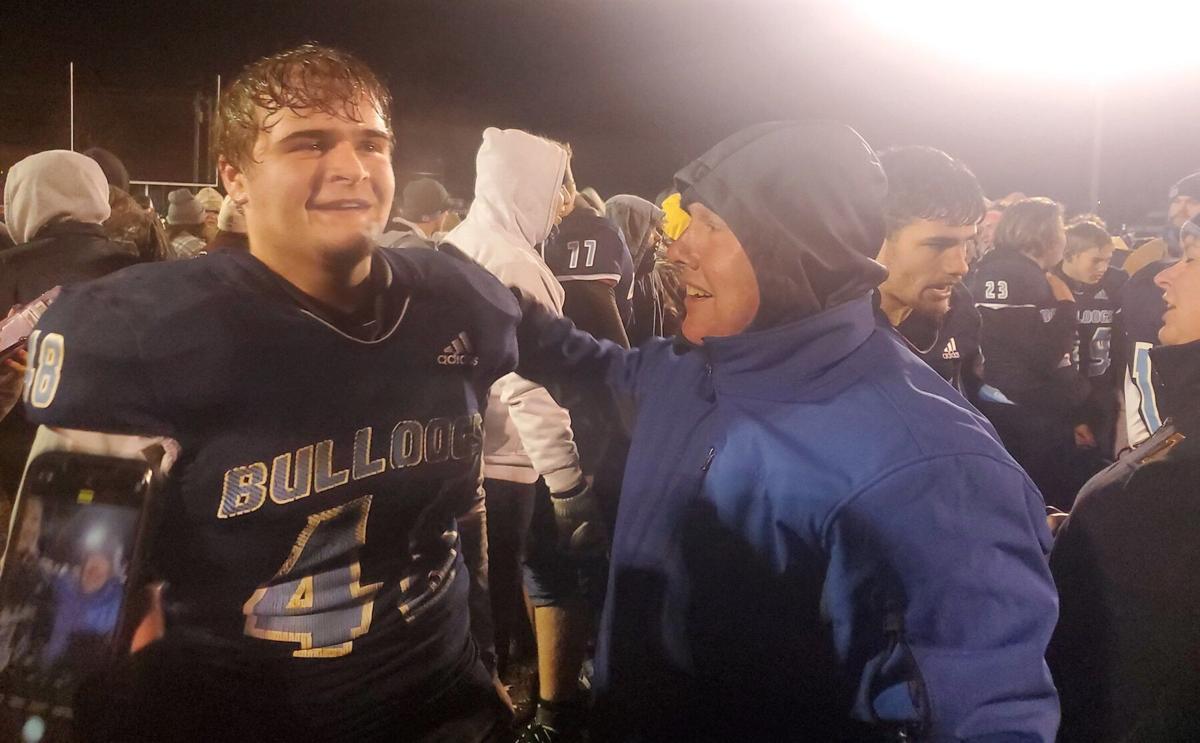 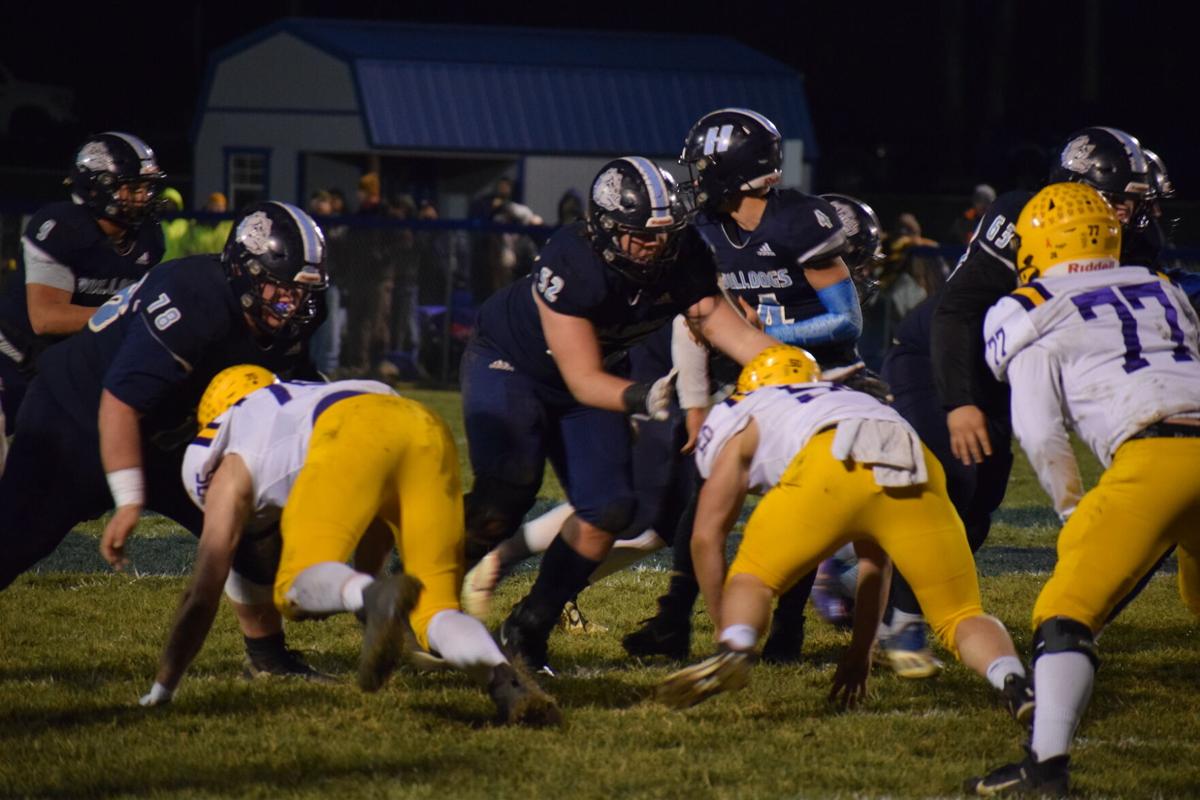 Hampton quarterback Conor Jones gets ready to hand off to Levi Lunsford as the offensive line looks to open a running lane. 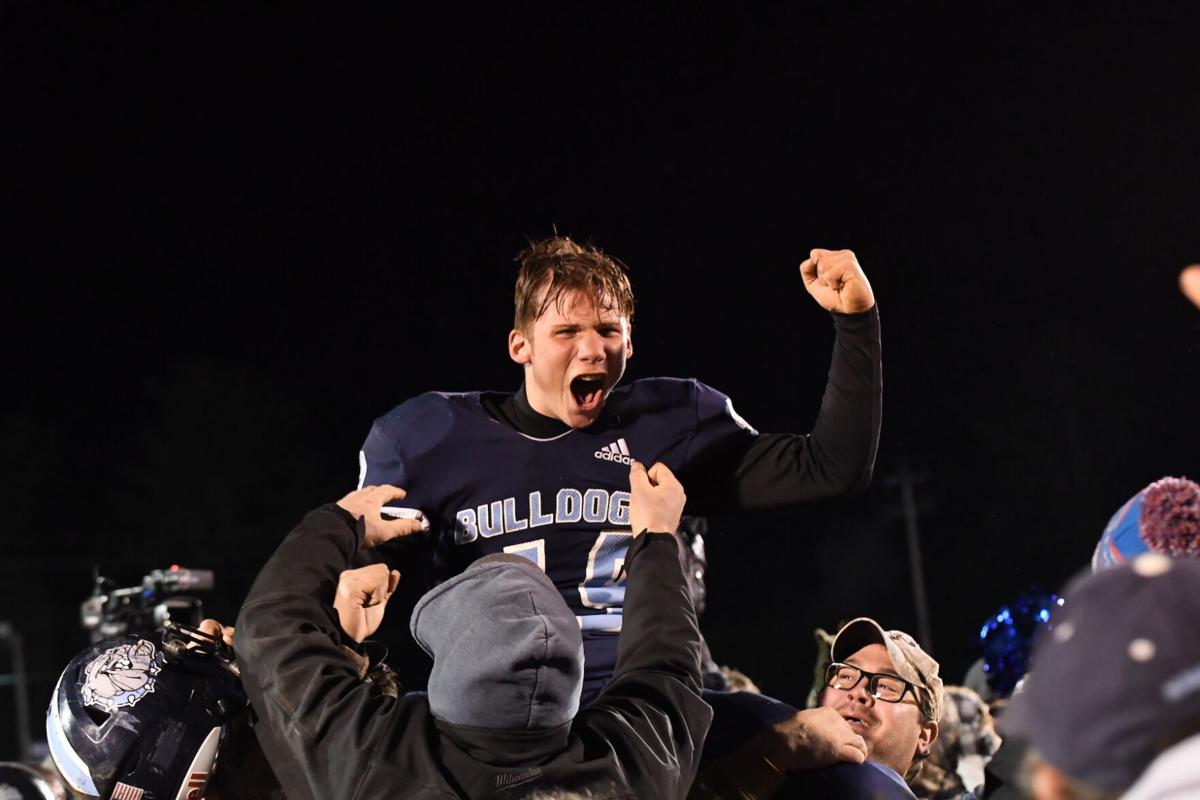 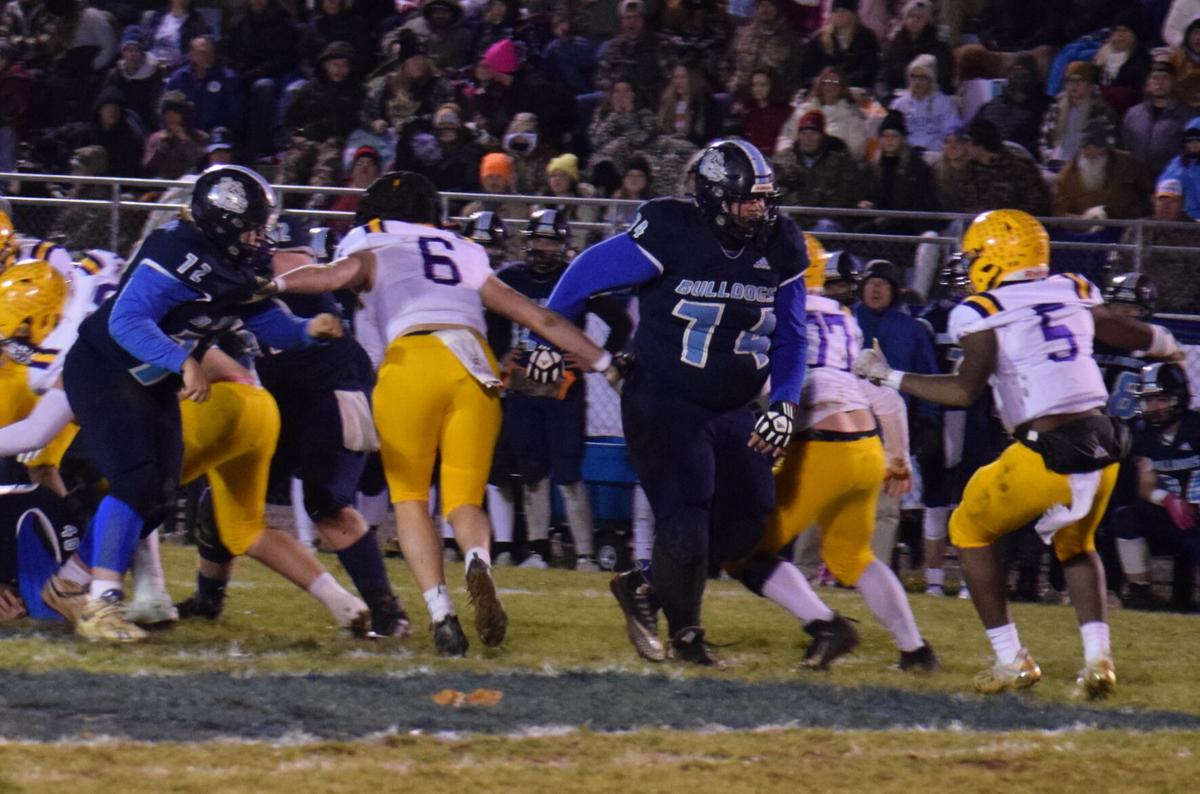 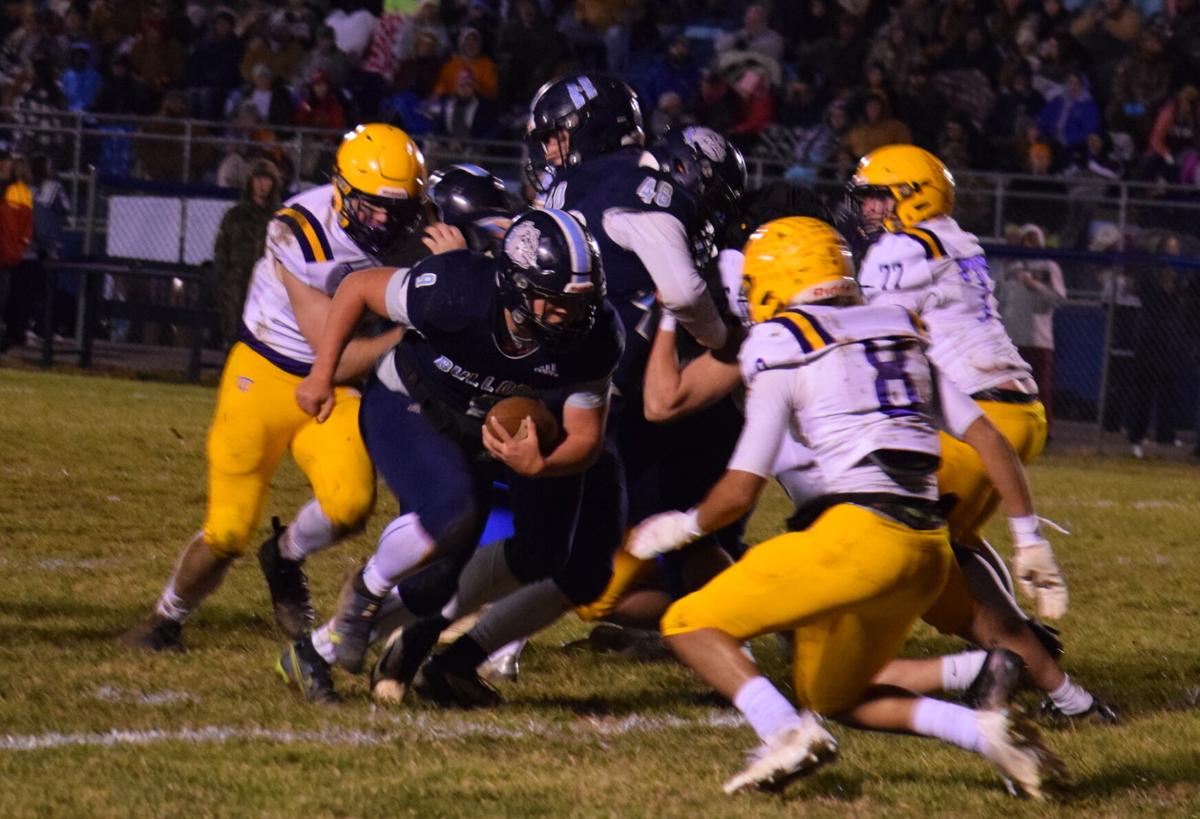 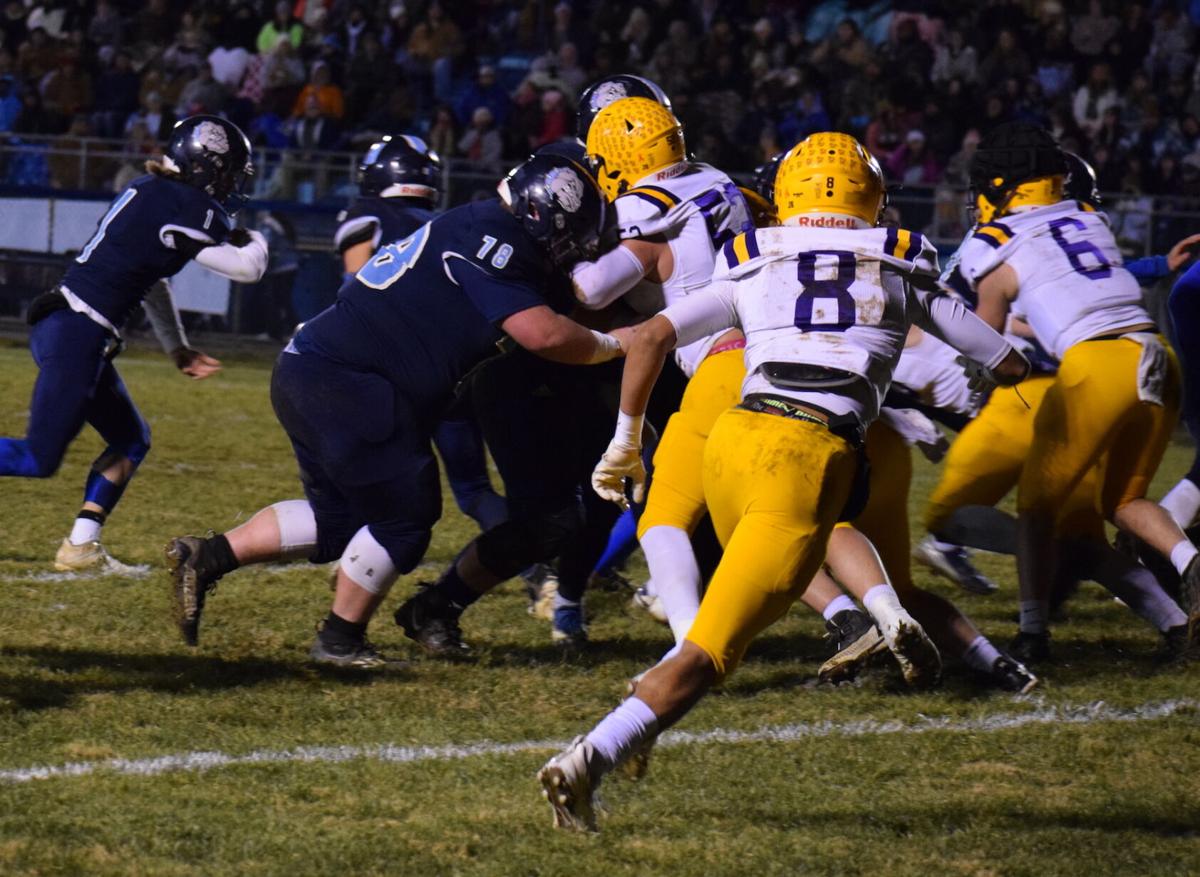 McKinley Kuhn (78) leads the push of the Hampton offensive line in the first quarter. 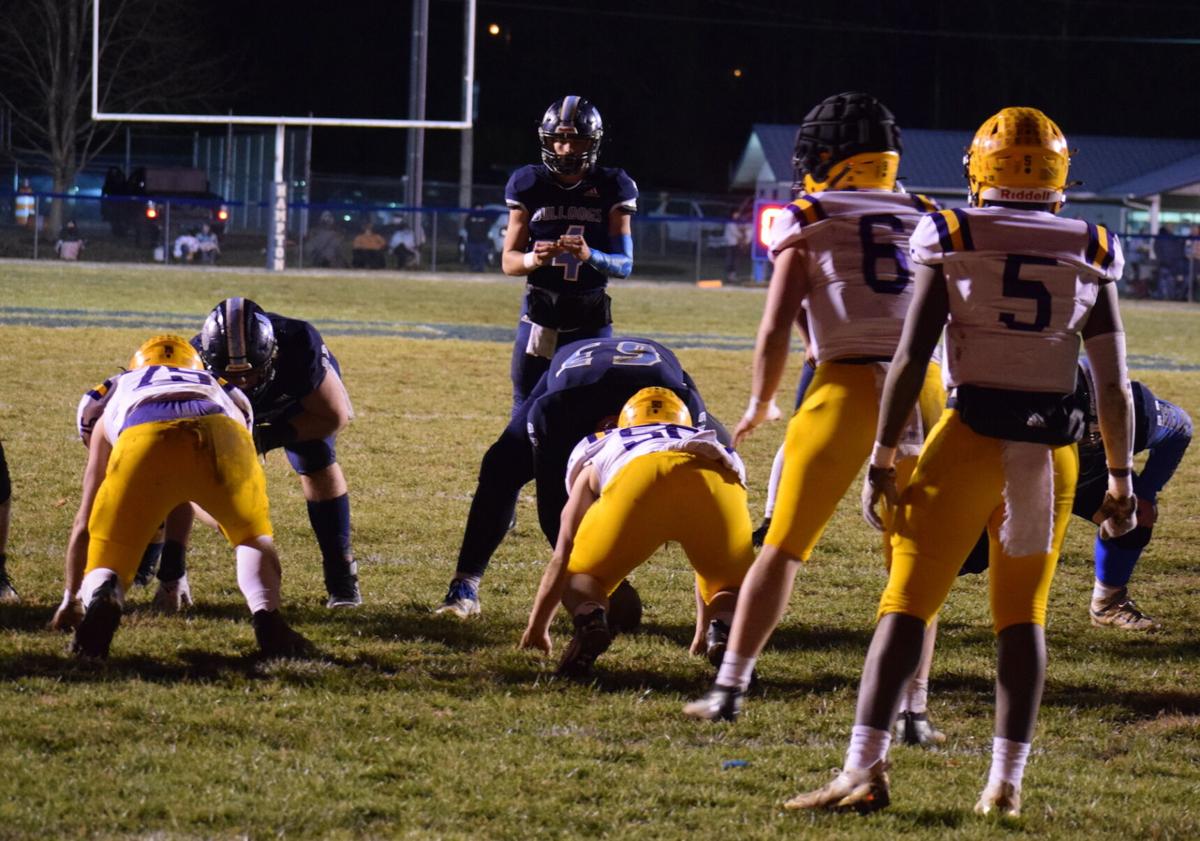 Hampton quarterback Conor Jones calls a play near the goal line in the first quarter of Friday's game.

Hampton quarterback Conor Jones gets ready to hand off to Levi Lunsford as the offensive line looks to open a running lane.

McKinley Kuhn (78) leads the push of the Hampton offensive line in the first quarter.

Hampton quarterback Conor Jones calls a play near the goal line in the first quarter of Friday's game.

HAMPTON — With a trip to the state championship game on the line, Hampton wasn’t about to be denied by Trousdale County.

Senior quarterback Conor Jones ran in a 3-yard touchdown with 49 seconds left and then scampered for the winning 2-point conversion as the Bulldogs edged the Yellow Jackets 22-20 in Friday’s Class 2A state football semifinal at J.C. Campbell Stadium.

The end of a 14-point, fourth-quarter rally came after Trousdale (11-2) had stopped Hampton twice on goal-line stands. The Bulldogs (10-2) will play Westview, a 35-18 winner over Decatur Riverside, in next Saturday’s championship game.

On the winning drive, which started with 4:35 left in the game, Jones had runs of 13, 13 and 14 yards. He had a 7-yard run the previous play before his game-tying touchdown.

“We weren’t going to be denied,” said Jones, who had 149 yards and two touchdowns on 26 rushes. “I told the guys to stand up and be strong. They stopped us a few times, but what matters is the next play. Put the past behind you and move on. That’s what we did tonight.”

The youngest of four brothers to star in the Hampton program, he was reflective after the game.

“I just wanted to make my family proud. Without them, I wouldn’t be here,” Jones said. “My parents raised me up in a Godly way to put the Lord first in all I do and I’m just thankful for that.”

Head coach Michael Lunsford, who played quarterback on the 2005 Hampton team eliminated by Trousdale in the semifinals, was choked up with emotion. The odds appeared stacked against the Bulldogs when the Yellow Jackets scored two touchdowns in a matter of seconds to take a 20-8 lead.

“It means the world to me. I’m tickled to death for the kids, the community, the coaches,” Lunsford said. “We battled from the time it started until the time it ended. There was no quit in the kids. I could not be prouder, not just this team, but the guys leading up to this, they’re a part of this.

“The last time we played them here, we were overmatched and overmanned. This year, I felt like we had chance. We told the kids all week, they had to play perfect. Then, these guys realized they didn’t have to be perfect. All they to do was be as good as they could possibly be.”

That was the case with Chance Point, who was at a low point after he fumbled a kickoff return, which Trousdale returned for a touchdown and a two-possession lead. However, Point kept battling and had the game-clinching interception to put an exclamation point on the night.

“Having that fumble and they return it for six, that really sat me down,” Point said. “But my teammates told me to hold my head up. When I came up with that interception, I knew we were going to state for the first time. I’m excited for that trip although it’s all still hard to comprehend.”

Hampton took advantage of good field position at the Trousdale 39 to go eight plays for the first touchdown, a 1-yard keeper for Jones. A 2-point conversion run by Levi Lunsford gave the Bulldogs an 8-0 lead.

Trousdale’s Garrett Rieger intercepted a halfback pass to give the Yellow Jackets the ball at the Hampton 31. Like their opponents, the Jackets took advantage with Bryson Claiborne going 15 yards on the right side for a touchdown. The Hampton defense held on the conversion run to hold an 8-6 lead.

The Bulldogs drove 64 yards to the Trousdale 1 in the closing moments of the first half. The drive was highlighted by Jones’ 37-yard run. However, Trousdale had a goal-line stand on 4th-and-1 to deny Hampton with 42 seconds left.

The Yellow Jackets had a pair of quick scores in third quarter. Brian Banks took a pitch and raced 77 yards down the left sideline to give the Yellow Jackets the lead. On the ensuing kickoff, the big hit on Point forced a fumble, which Claiborne returned 31 yards for a touchdown.

Hampton had a chance to answer after going on a 65-yard march to the Trousdale 2, but was denied again on fourth down.

The Bulldogs wouldn’t be turned back after that point. On the next possession, Lunsford scored on a 4-yard run to cut the lead to 20-14. From there, the defense forced a three-and-out to set up the final drive of 65 yards.

Offensive lineman McKinley Kuhn was part of the group that paved the way for Jones’ last-minute heroics.

“There was no doubt we were going to score,” Kuhn said. “We just dug in there and we knew this was our time. They’ve waited for however long this school has been around, but we finally pulled through. When Chance came up with that interception, all I could think was, ‘We did it.’ If it wasn’t for the good Lord above … it’s Thanksgiving and we’re all thankful.”