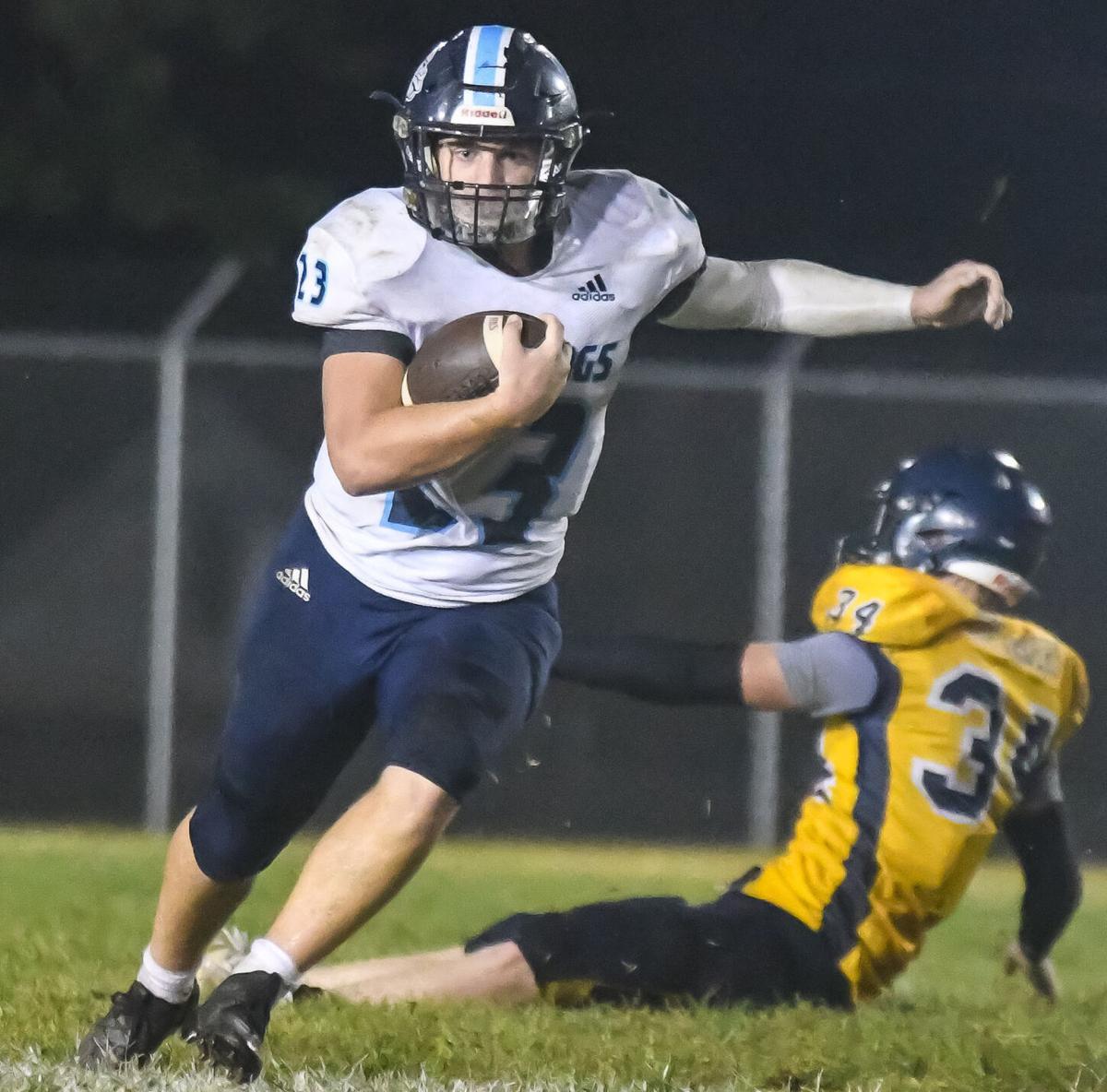 Hampton running back Aiden Vines leaves a Cloudland defender behind in Friday's 34-12 victory. 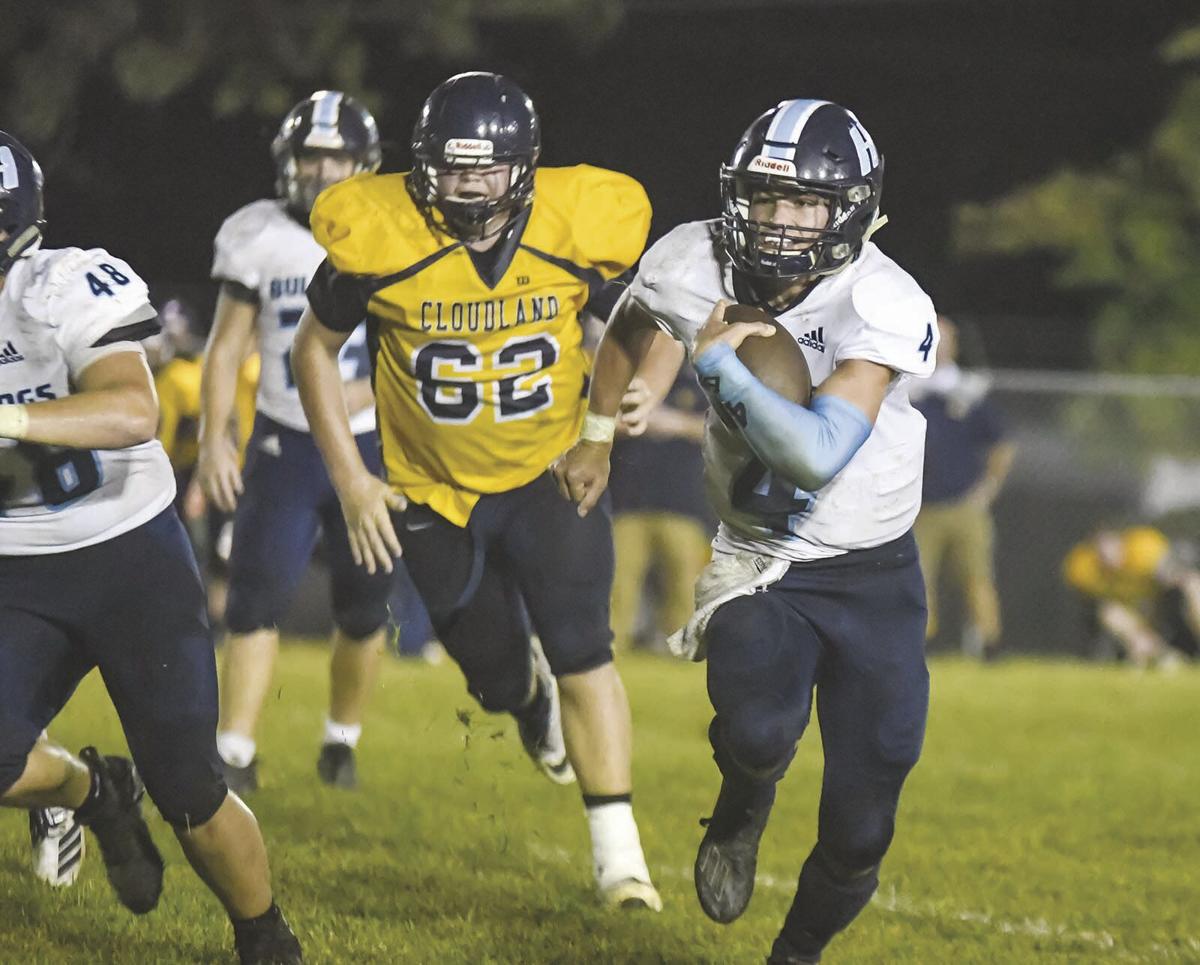 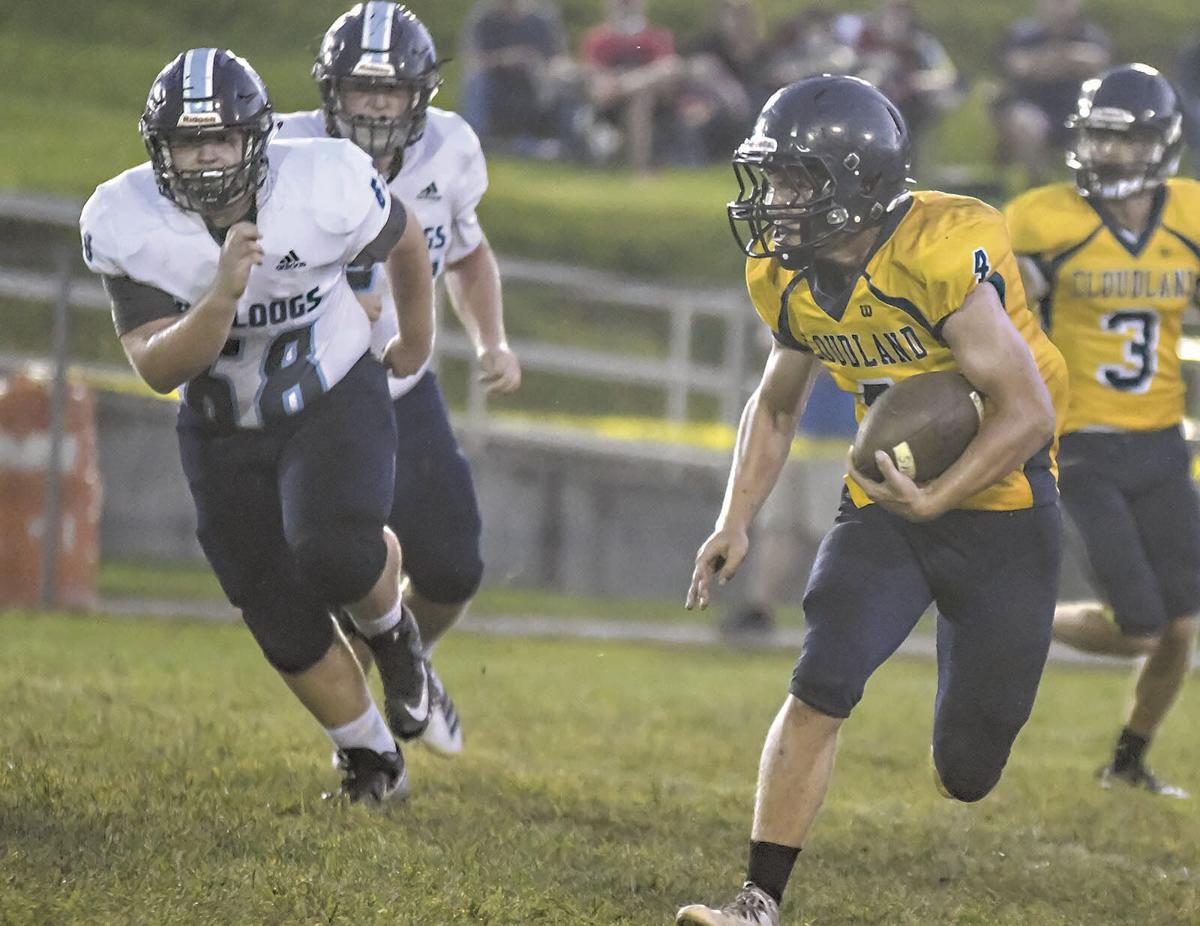 Hampton running back Aiden Vines leaves a Cloudland defender behind in Friday's 34-12 victory.

Hampton has run roughshod over opponents from all directions its first three weeks of the high school football season.

The Bulldogs (3-0) defeated Cloudland 34-12 on Friday night, which was their third straight win over a border rival. Another border rival awaits this Friday with a game at Johnson County.

While Hampton has been able to air the ball out in recent years, there is nothing fancy about this year’s offensive attack. It’s ground-and-pound as quarterback Conor Jones and running back Aidan Vines combined for 274 rushing yards and four touchdowns in the win over the Highlanders.

Both are averaging over 100 rushing yards per game. Jones has piled up 346 yards and Vines 303 over the three games. Morgan Lyons has accounted for 200 yards.

Jones is carrying on a family tradition by serving as a Hampton offensive leader the way older brothers Jacob, Coby and Jonah did in previous seasons. The 6-foot, 170-pound junior also plays free safety on the defense.

“They’ve been great athletes, great competitors,” Hampton coach Michael Lunsford said. “We’re asking a lot of Conor right now. We’ve had to make him come off the field on kickoffs and kick returns. Other than that, he’s always on the field.”

Success in both sports is a longstanding trait at Hampton. One can go back to the 1960 state championship basketball team coached by Buck Van Huss through Hall of Fame coaches like J.C. Campbell in football and Jerry White in basketball to the modern-day success of Lunsford and his hoops counterpart Ned Smith.

Lunsford, who took over as football coach from his another Hall of Famer, his father Mike, in 2016, talked about the toughness and tradition that define the Bulldogs’ programs.

“It’s a credit to the community, where we live and the people we live around,” Lunsford said. “There are things we expect out of each other and they are tough kids. We play a brand of football where you have to be tough to play it.

“There is a strong tradition where kids grow up and watch the high school boys play. They’re eager to become those boys. It’s an electric atmosphere that everybody wants to be a part of and they’re willing to pay the price to be a part of it.”

There have been additional hurdles to be a part of it in 2020.

Many wondered how Hampton would do in its season opener against Unicoi County since the Bulldogs were a week late getting started with the COVID-19 shutdown. They answered with a 32-7 dismantling of the Blue Devils.

The next week, they blanked Happy Valley 28-0 and shut down running back Matthew Bahn, who had rushed for five touchdowns the previous week against Cloudland.

“I still feel like we’re playing a little catch-up being in shape and some of the mistakes with penalties and fumbles,” he said. “For us to be a playoff contender, we have to get those cleaned up.”

Holding penalties and false starts have come in part to the communication issues of being behind schedule. However, Lunsford is pleased with the overall play of the offensive line. He feels it’s the team’s strongest unit and the senior leaders rank among the best linemen in Northeast Tennessee.

“R.D. Ward, Caleb McKinney and Doug Tolley are about as good as anybody around,” Lunsford said. “They’ve had to play a lot since they were sophomores and now they’re all seniors. They’re strong blockers and really selfless kids.”

The Bulldogs rely more on sophomores and freshmen at other positions. A good example is freshman Dylan Trivett, who is playing extensively at wide receiver and cornerback. Trivett responded to the opportunity with an interception in the end zone against Unicoi County.

Blake Peavy is at the other corner and someone Lunsford sees making big strides as the year goes on. There’s also a budding star at wide receiver and linebacker.

“Johnny Greenwell probably has more athleticism and talent than anyone on our team,” Lunsford said. “But he’s a sophomore and I don’t know if he understands how good he can be. It’s up to us as a coaching staff to get it out of him.”