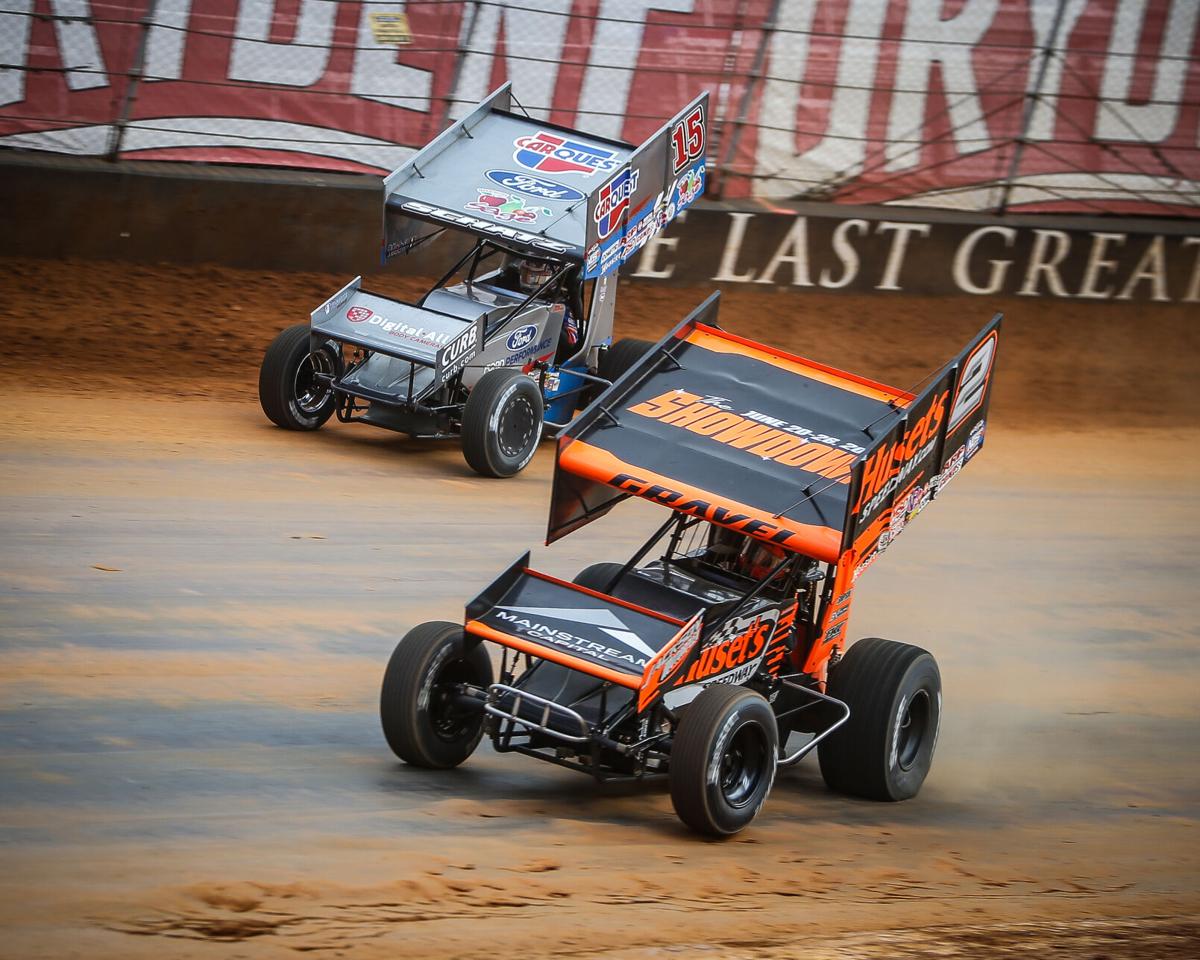 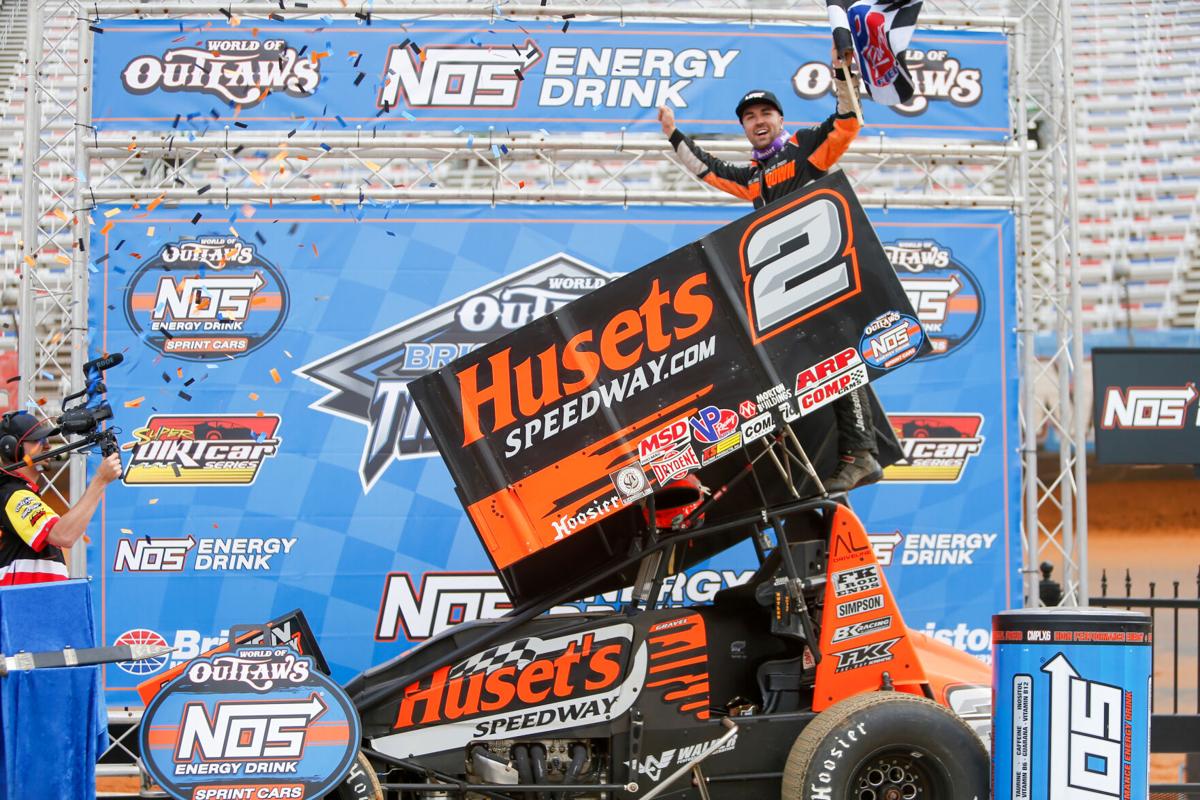 David Gravel emerges from his car to celebrate his win Sunday in the World of Outlaws Bristol Throwdown. 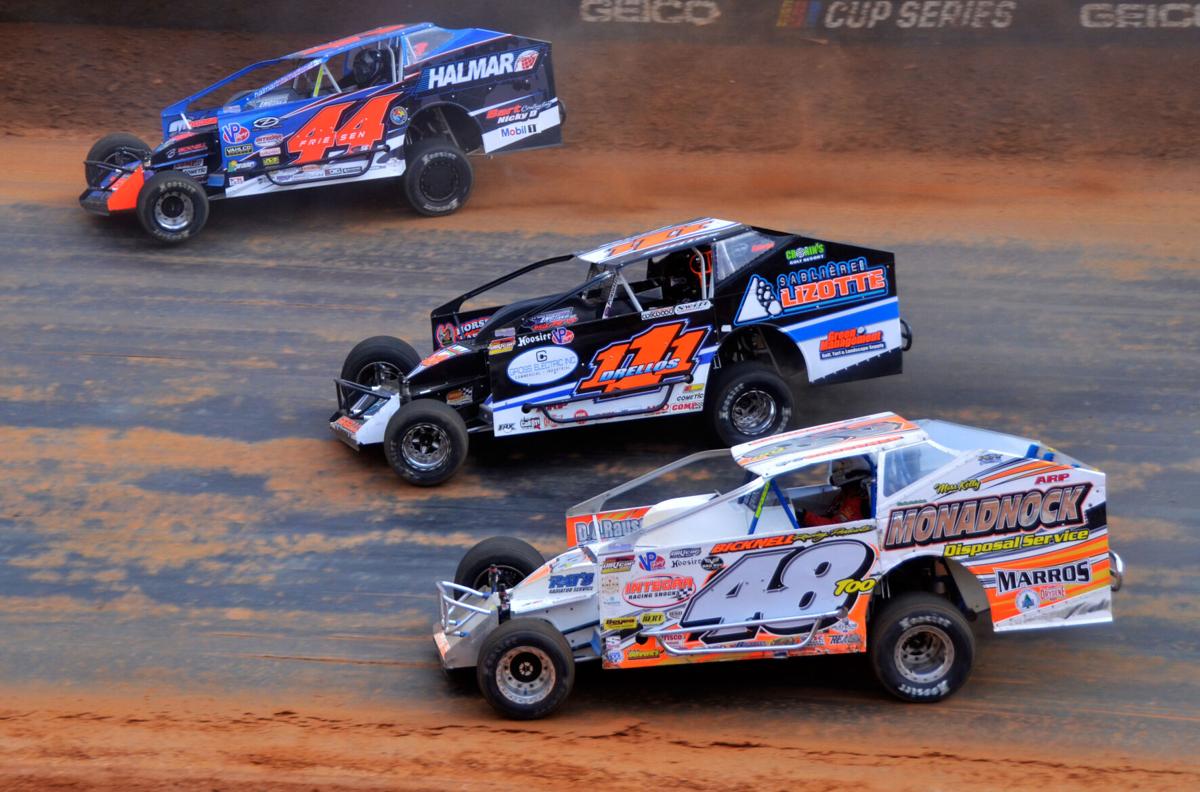 Stewart Friesen (44) goes to the high side of Demetrios Drills (111) and Dave Rauscher (48) on his way to winning Sunday's DIRTcar Big Block Modified feature at Bristol Motor Speedway.

David Gravel emerges from his car to celebrate his win Sunday in the World of Outlaws Bristol Throwdown.

Stewart Friesen (44) goes to the high side of Demetrios Drills (111) and Dave Rauscher (48) on his way to winning Sunday's DIRTcar Big Block Modified feature at Bristol Motor Speedway.

The Connecticut driver made a pass of Logan Schuchart with two laps to go and held off 10-time Outlaws champion Donny Schatz to win Sunday’s $25,000-to-win feature in the Bristol Throwdown. Gravel had fallen to third behind Schatz before rallying back to the runner-up spot.

He chased Schuchart through traffic before Schuchart slipped coming off turn 2. Gravel dove underneath to take over the lead. Schuchart’s car then slowed as the cars came to the white flag.

It set up a two-lap shootout where Gravel in the orange and black No. 2 pulled away from Schatz’s silver No. 15 for his 61st career win.

“Logan slipped up a couple of times before I passed him. I had a huge run on Logan and got the lead,” Gravel said. “He was running a hellacious pace. You run that fast, then get to traffic and you have to slow down and figure things out. He made a couple of mistakes, I made a couple and so did Donny. Luckily, I was able to recover. To cap off and sweep the weekend at Bristol, it’s awesome.”

Schatz, who was looking for a milestone 300th career victory, held off Aaron Reutzel for the runner-up spot. Driving for Tony Stewart Racing team, the North Dakota racer was frustrated to not finally reach the milestone.

“We had a solid finish and had good speed, just needed to be more consistent every time it went yellow” Schatz said. “The guys did an awesome job with the car. It’s just the nature of the beast, so hard to climb out of that hole. We had a chance to contend for a while, but ended up second, so we’ll take it.”

Reutzel, who finished second to Gravel in Friday’s feature, ended up third. It was a mad rush just to get his No. 83 ready to race as the engine on the car spewed smoke at the end of his heat race. While they got it fixed in time for the feature, the Texas driver added that racing in the afternoon also affected the handling of his car.

“Just kept our heads down and kept digging. We tried to make the best of everything that happened,” Reutzel said. “We were pretty good, just not as good as the first night.”

Two-time defending World of Outlaws champion Brad Sweet finished 11th, while Schuchart wound up 19th in the 24-car field. With the race postponed from its original Saturday date, NASCAR star Kyle Larson missed the race due to him competing in the Cup Series event in Talladega, Alabama.

Friesen, a veteran of the Super DIRTcar Modifieds, scored his third straight win in the series and 28th career win overall.

He swapped the lead with pole sitter Mike Mahaney three times, taking the lead for good on lap 24 of the 40-lap, $10,000-to-win feature. Riding the high line, Friesen won by a half-second over runner-up Demetrious Drellos.

“I had some speed today,” Friesen said. “I just needed a long run to get the tires to fire up. This is the best afternoon track I’ve ever seen. To ride the cushion like that, it’s just such an awesome feeling, really cool.”

Derrick Lancaster, who was seriously injured in an August 7 wreck at Kingsport Speedway, remains in the University of Alabama burn center after suffering another hard crash in Saturday’s ARCA Series race at Talladega Superspeedway.

The right side of Lancaster’s No. 25 machine slammed the outside wall, leading to it being engulfed by a fiery mix of racing fuel and oil. He exited the car after it came to a stop and laid on the ground before being attended to by safety personnel.

Lancaster walked with help to a stretcher and was transported to the hospital. His wife, Elizabeth, posted on social media that he suffered second and third-degree burns and was in critical, but stable condition. He is expected to be on a ventilator for a couple of days.