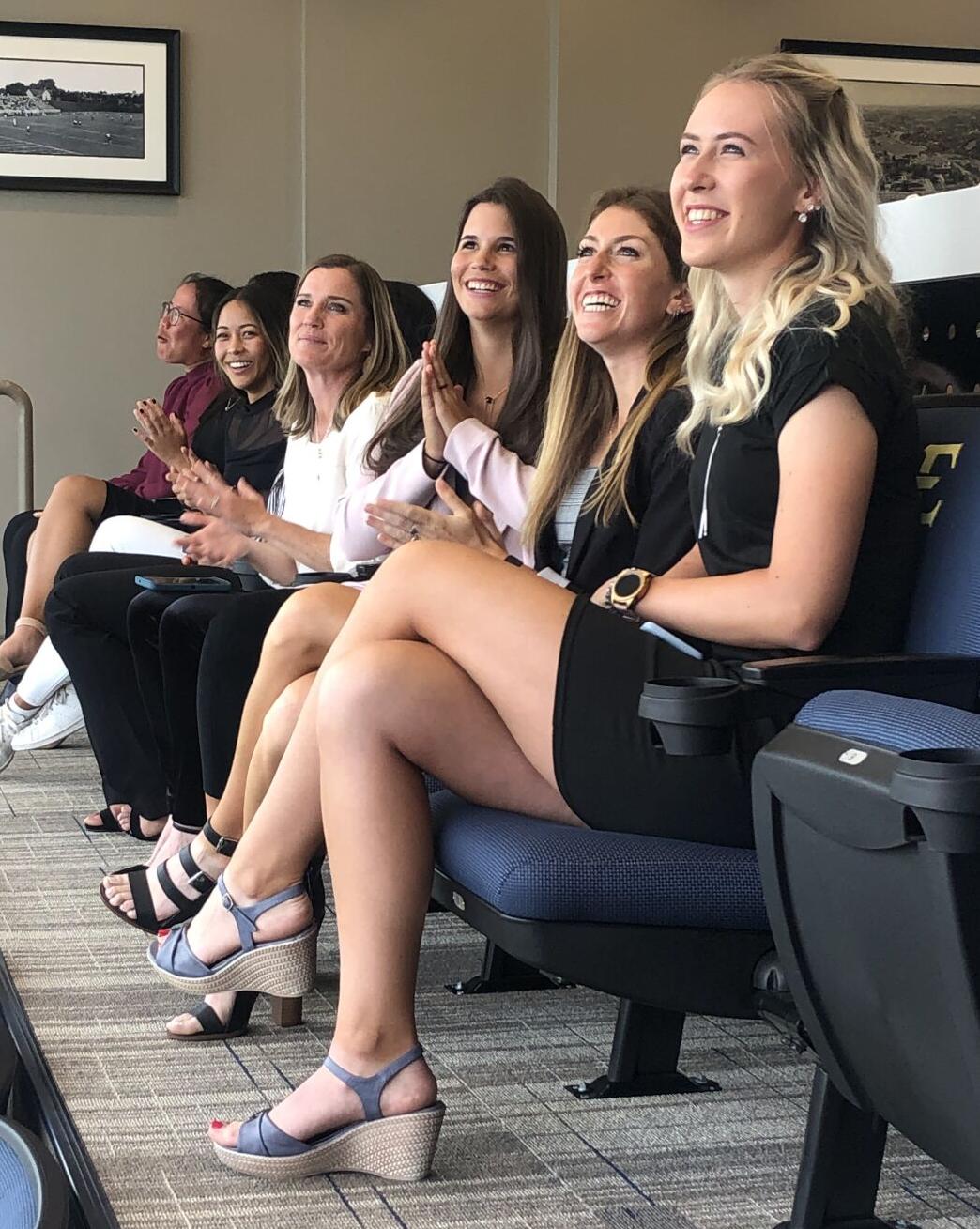 The ETSU women’s golfers react to seeing their team’s name pop up on the screen during Golf Channel’s selection show for the NCAA regionals. 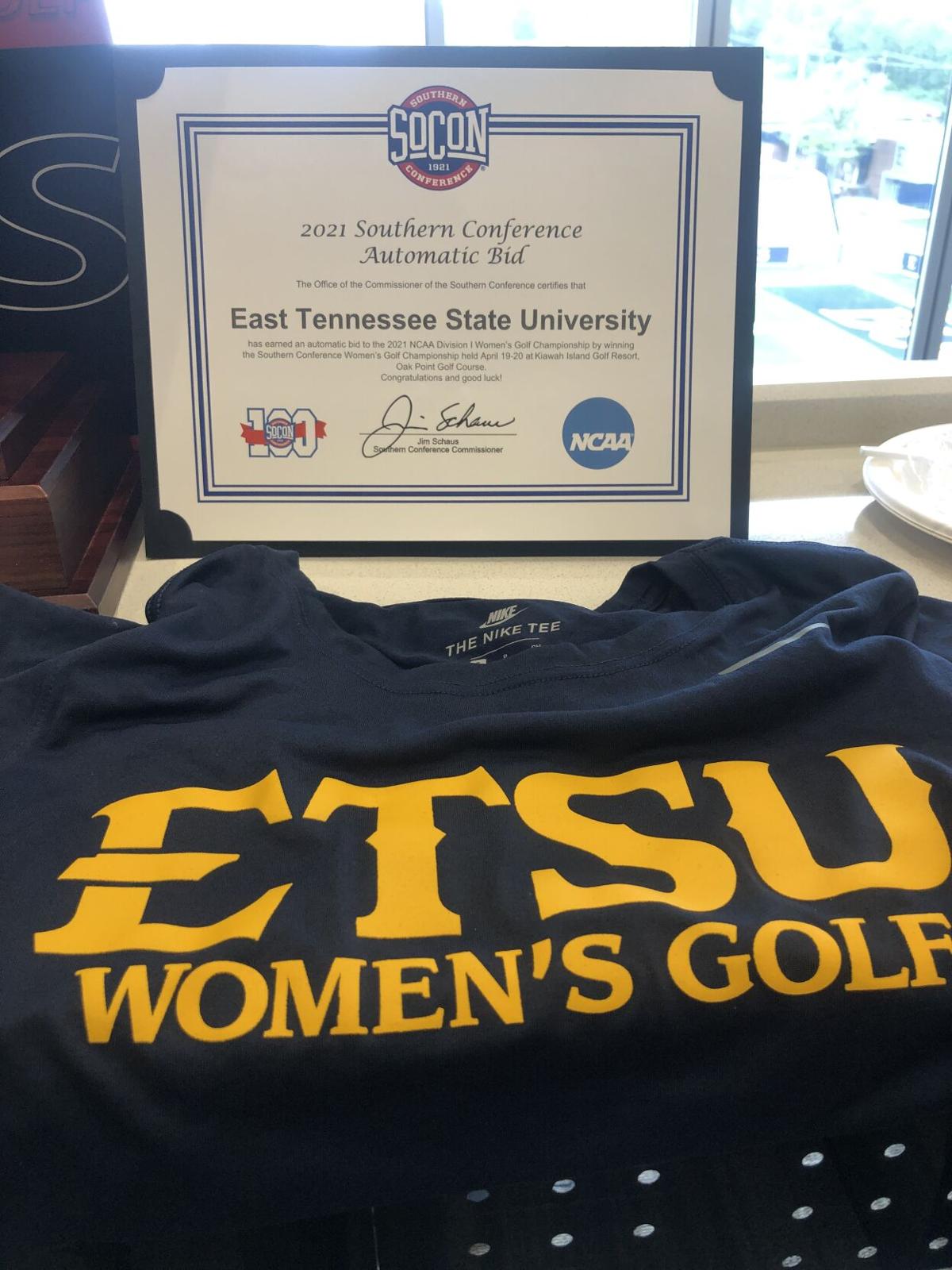 The official NCAA automatic bid issued by the Southern Conference to the Bucs.

The ETSU women’s golfers react to seeing their team’s name pop up on the screen during Golf Channel’s selection show for the NCAA regionals.

The official NCAA automatic bid issued by the Southern Conference to the Bucs.

The NCAA regional selections came out Wednesday and the Bucs, who earned the Southern Conference’s automatic bid, were seeded 16th in the LSU Regional and will play at University Club in Baton Rouge on May 10-12. The top six teams out of each 18-team regional will advance to the NCAA Championships.

The regional selections were announced on Golf Channel.

“It’s so exciting,” ETSU coach Stefanie Shelton said during a watch party inside Greene Stadium, home of the ETSU football team. “That will never get old. To see East Tennessee State posted on a national selection show, it’s such a moment to see that up there. It’s something that you can’t explain to the girls until they see it.”

The regional appearance will be ETSU’s fifth under Shelton. The team won its first-ever Southern Conference tournament championship, beating Furman by one stroke.

“I think once you see your name up there among the top schools in the country, it’s powerful,” said Shelton, the SoCon’s coach of the year. “It’s special. They need to know they belong there. I think they do know that they belong there and can make it to nationals.”

LSU is the top seed in the regional, followed by Ole Miss, Baylor, Oregon, Maryland and Alabama. Other regional sites are Louisville (Kentucky), Columbus (Ohio) and Stanford (California). The NCAA Championship is set for May 21-16 at Grayhawk Golf Club in Scottsdale, Arizona.

Shelton says her senior-laden team is ready to compete on the big stage.

“This team has been growing,” she said. “It’s that intangible that we haven’t had in a long time. I don’t think we’ve ever had it this powerfully. I really have a special feeling about this team right now. It’ll be fun to give it a try. I think they have what it takes.”

ETSU’s SoCon championship wasn’t assured until the final putt of the tournament, and when Julia Goodson sank a 4-footer for par, the Bucs beat perennial favorite Furman.

Goodson did not know the significance of her putt while she was lining it up. Shelton had an idea, but she wasn’t certain.

“I knew it was close, but I didn’t know that it was one shot,” said Goodson, a graduate student who transferred to ETSU from Kent State. “I was so nervous because there were so many people. I told myself this is just any other putt. It doesn’t matter. Just go through my routine. That helped me calm down a lot.”

Had she missed, a team playoff would have ensued. When the putt went in, even her teammates weren’t sure what had just happened.

“I think they knew, but they weren’t sure,” Goodson said. “I walked up to my coach after that last putt and she told me she thought that may have just won the championship. I was shocked. And then I was very excited and I was like ‘I need to go turn in my scorecard.’ It was unbelievable.”

Mercer was the other SoCon team to get a bid as an at-large team and was seeded 14th in the Louisville Regional. Furman had three players make the field as individuals. They are also playing in Louisville.

13. University of Texas at San Antonio