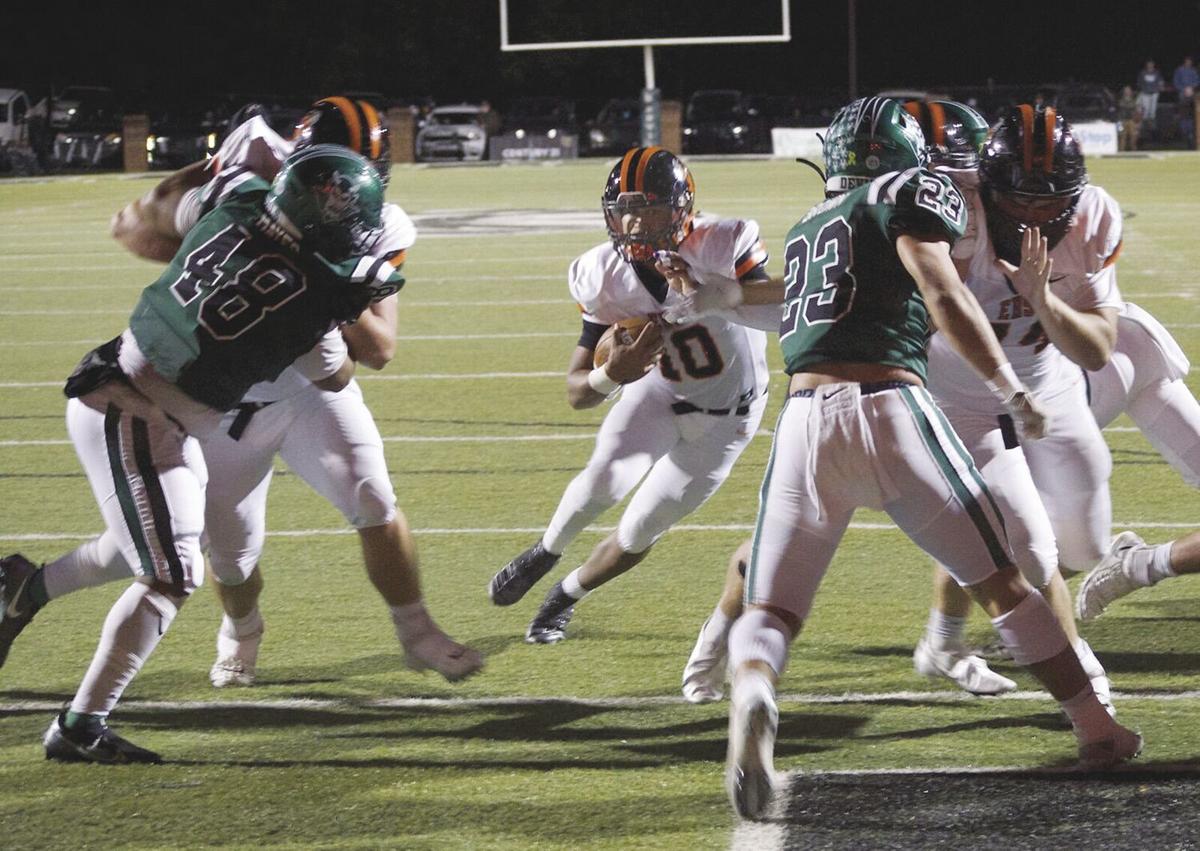 Elizabethton quarterback Bryson Rollins (10) follows his offensive line into the end zone at the end of the first half. 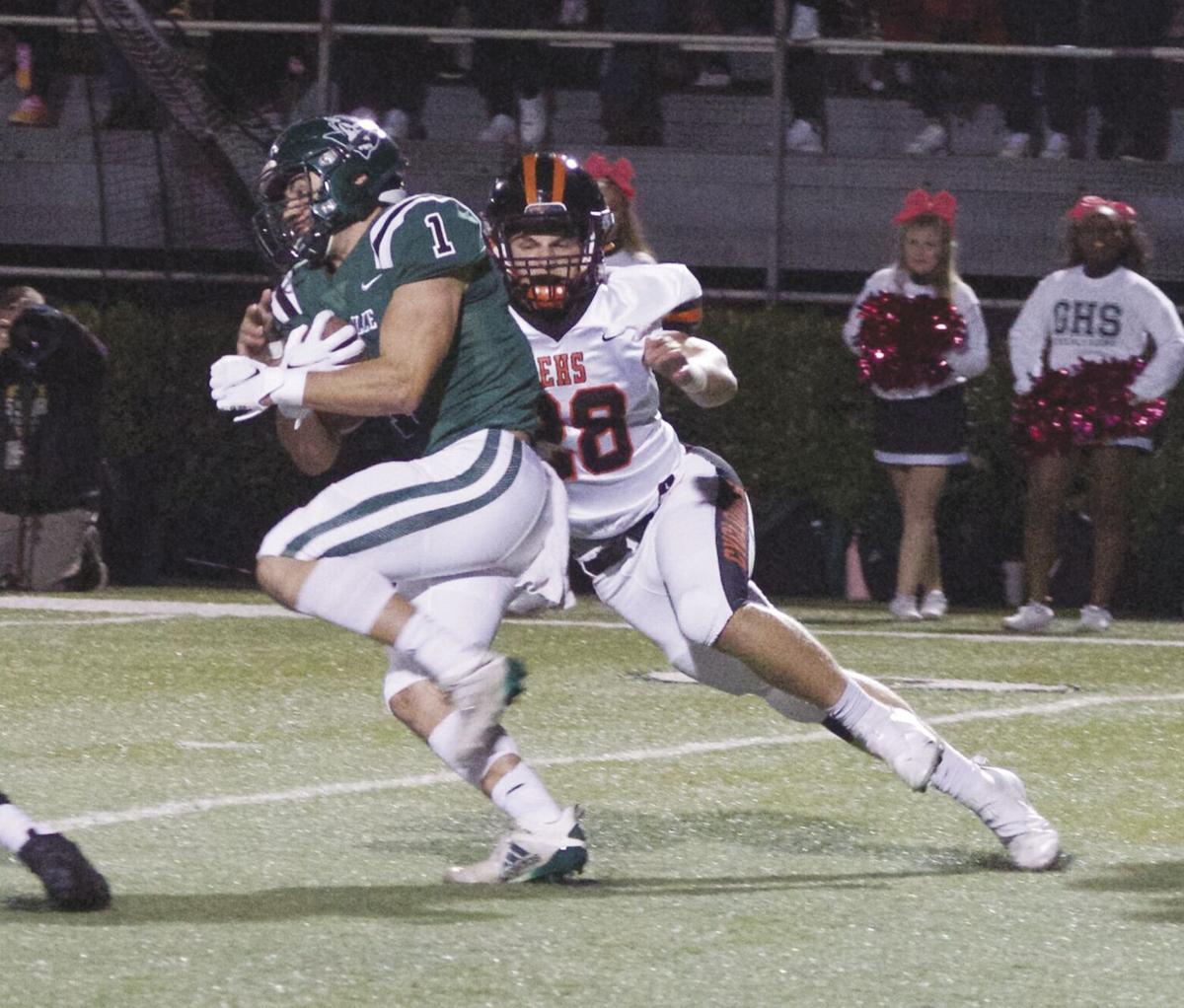 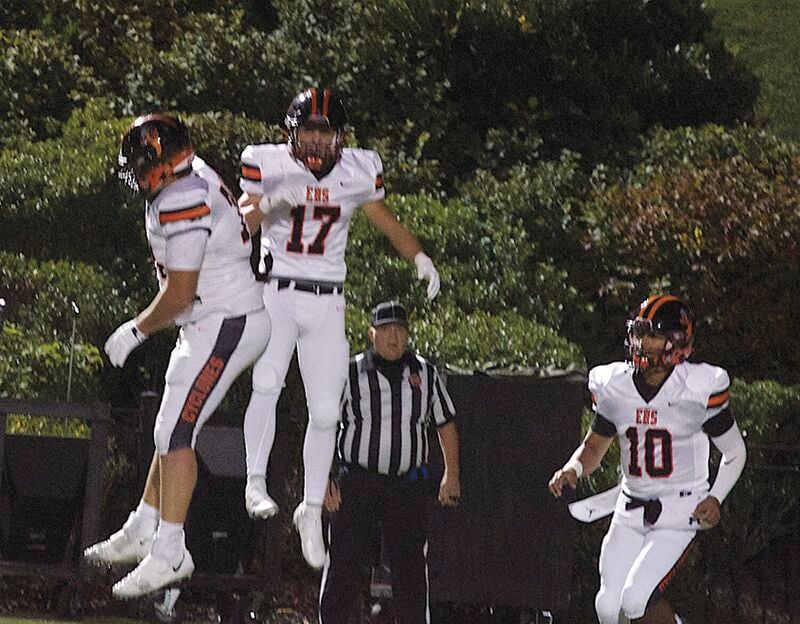 Jake Roberts (17) celebrates after scoring on a long pass play in the first quarter.

Elizabethton quarterback Bryson Rollins (10) follows his offensive line into the end zone at the end of the first half.

Jake Roberts (17) celebrates after scoring on a long pass play in the first quarter.

GREENEVILLE — Bryson Rollins accounted for 374 yards of offense and five touchdowns to lead top-ranked Elizabethton to a 44-10 rout of Greeneville in Friday night’s Region 1-4A showdown at Burley Stadium.

Rollins hit Roberts on a 68-yard pass play in the first quarter and again for a 53-yard play in the third. It put Elizabethton well on its way to beating the No. 10-ranked Greene Devils in a showdown of programs who have combined to win the last three TSSAA Class 4A state championships.

“We thrive in the tough situations,” Elizabethton coach Shawn Witten said. “We’ve got a quarterback who is relentless to get it in the end zone. We did a great job of staying the course. Tonight’s game wasn’t about the first series or the first quarter, it was about a complete football game.”

“We looked at film all week on that,” Rollins said about his first touchdown with Roberts. “We hit Zach Hartley on that play last year. We looked at what they had and realized Jake was going to be open when they were playing man. I enjoy the film study. That’s a big part of the game and without it, we wouldn’t be the team we are today.”

The Greene Devils (5-3, 3-1) matched Elizabethton most of the first half. After Rollins and Roberts had their first long touchdown, Nick Iezzi took the ensuing kickoff 85 yards — setting up a 1-yard touchdown run moments later.

Elizabethton pulled ahead 10-7 on a 26-yard field goal by Sean Smithdeal in the second quarter. Greeneville answered again as Cooper Graham booted a 20-yard field goal to tie the game with 1:03 left.

Parker Hughes returned the kickoff to the 48-yard line. Later, Rollins connected with Hughes on a 19-yard pass play. It set up a 1-yard quarterback sneak for Rollins with 9.3 seconds left in the half.

Rollins scrambled and found Roberts wide-open for the 53-yard touchdown play on the opening drive of the second half. Elizabethton scored on its next possession capped off by LaDarian Avery’s 6-yard run.

Next, an interception and return by Cade Russell put the ball on the Greeneville 3. Rollins scored on the next play and the Cyclones were ahead 37-10.

“My first touchdown was a go-route and Bryson did a great job putting the ball in my hands,” said Roberts, who had four catches for 132 yards. “We run that play in practice all the time. The second touchdown, that was a scramble throw that we like to run in practice when the play breaks down. That’s Rollins trusting his receivers.”

Rollins trusted his legs as well, capping off his night with a 9-yard touchdown run. The Cyclones piled up 444 yards of total offense.

They also had big defensive efforts by linebackers Deuce Morton and Blake Stewart in limiting Greeneville running back Mason Gudger to 71 yards on 17 carries.

“Gudger is really good and they run that inside zone. He never stops his feet, but Deuce and Blake did a great job with the linebacker reads on them all night long,” Witten said. “They’re a good football team and they made us earn every play, every yard.”

Elizabethton looks to clinch the Region 1-4A title at Sullivan South next Thursday night. Greeneville will try to get back on track at Grainger on Friday.