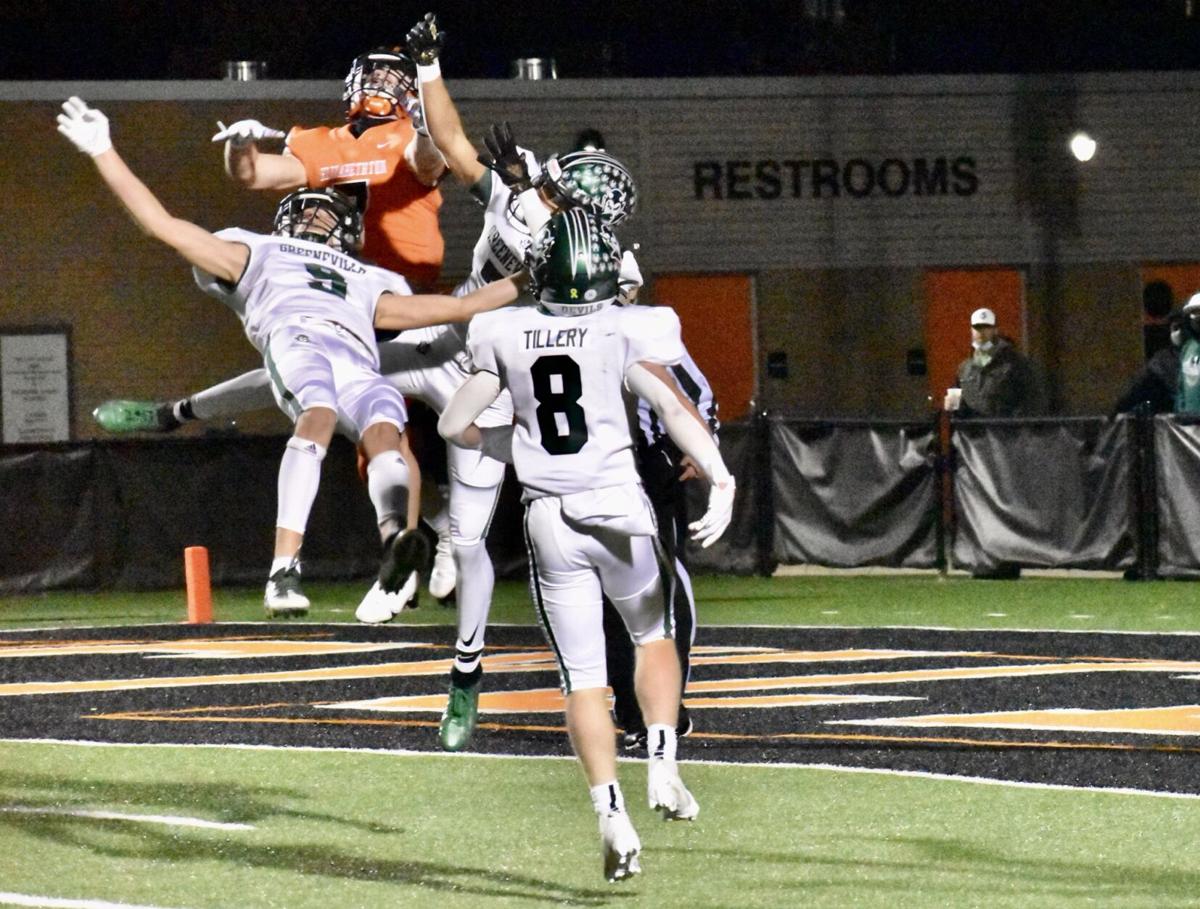 Elizabethton‘s Parker Hughes and three Greeneville defenders have an eye on a deflected pass at the goal line. Jackson Tillery (8) wound up with the interception after tight coverage from Mason Laws (9) and Jakobi Gillespie (7). The Cyclones held on for a 24-20 win, their 28th consecutive victory. 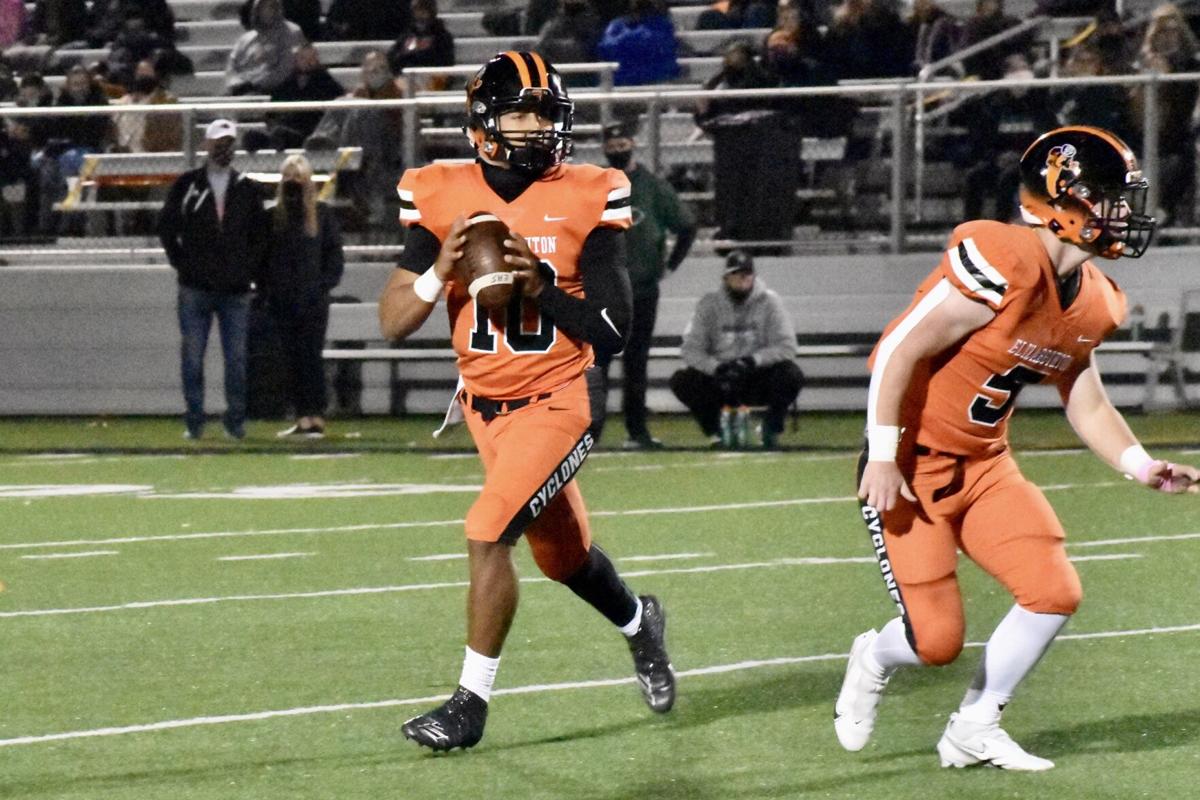 Elizabethton‘s Parker Hughes and three Greeneville defenders have an eye on a deflected pass at the goal line. Jackson Tillery (8) wound up with the interception after tight coverage from Mason Laws (9) and Jakobi Gillespie (7). The Cyclones held on for a 24-20 win, their 28th consecutive victory.

ELIZABETHTON — In a game where Greeneville delivered some potential knockout blows, Elizabethton made every play it needed to make when backed into a corner.

And guess who came up with the game’s two biggest plays? Yes, the Cyclones’ two Mr. Football finalists — augmented by a veteran offensive line.

Bryson Rollins delivered the eventual game-winning score while Parker Hughes wrapped up the exciting 24-20 win with an interception followed by a power run for a clinching first down in the TSSAA Class 4A state quarterfinals Friday night at Citizens Bank Stadium.

“I was just so proud of our guys,” said Cyclones’ head coach Shawn Witten, whose team defeated Greeneville for the fourth time in the last two seasons. “We knew it would be a tough game and we would have to lay it all on the line.

“We’re glad we’re an experienced team, and it paid off for us. It wasn’t pretty, but we’re moving on. We’re really blessed, and it was a great football game.”

It was the 28th straight win for the defending state champions, who improved to 13-0 this season. They will travel to face Nolensville next Friday in a rematch of last year’s semifinals. Nolensville (8-3) earned its spot this year by stunning previously undefeated Tullahoma 15-14 on a safety midway through the fourth quarter.

WINNING AT THE END

Trailing 20-17, the Cyclones started from their own 30-yard line late in the third quarter. An impressive 10-play drive was capped off by Rollins’ determined 7-yard third-down scoring run midway through the fourth quarter.

“Our offensive line got a good push for me to get through the line and get to the linebacker,” Rollins said.

Greeneville got the ball back and drove into Elizabethton territory. On fourth and 10 from the 40, Hughes made the big-time interception.

“I had No. 3 (Jaden Stevenson) to the middle,” Hughes said. “I was playing between him and another guy, and I made a break on the ball and just picked it.

“We knew we had to get a stop. We are coached well. We’re taught to never stop, no matter how hard it gets.”

With Greeneville down to one timeout, the Cyclones needed just one first down to pretty much end the game. On third and seven, Witten called Hughes’ name out of the backfield. The 12-yard blast off tackle was the clincher.

“Our big men, give them all the credit,” Hughes said. “They’ve been grinding since Day 1. I had a hole and went through it to ice the game.”

Hughes carried 11 times for 50 yards, all in the second half after being limited to just one touch while playing only at receiver in the first half.

“Greeneville did a great job of taking Parker away,” Witten said. “It was probably the best defensive game plan we’ve seen all year. It made it tough to get the ball on the edge.”

Hughes had only two catches for 21 yards in the game, and Greeneville picked off a pass at the goal line that was intended for Hughes.

The Greene Devils also locked down on Rollins, who carried 17 times but gained just 24 yards. He did score a pair of rushing touchdowns. Rollins was 6 of 12 passing for 105 yards.

After a 10-7 first half that looked pretty much like a draw in every phase of the game, the second half was a back-and-forth battle.

Greeneville turned the ball over on downs on its first possession deep in Elizabethton territory, but the Cyclones gave it back with a fumble after driving to midfield.

On the next play, Brady Quillen’s nicely thrown ball and scoop catch by Jaden Stevenson went for 53 yards and a touchdown to make it 13-10.

Clearly, this game was going to be much different than the first meeting when the Cyclones outscored Greeneville 28-0 in the second half of a 44-10 decision.

After the score to go ahead, Greeneville committed two false-start penalties and eventual missed the 30-yard extra-point attempt. On the miss, the Greene Devils were hit with a personal foul and had to kick off from their own 20-yard line.

Hughes returned the kick to the Greene Devils’ 47-yard line. Nine plays later, Cade Russell barreled into the end to put the Cyclones ahead, 17-13.

If the Greene Devils had won this game, the upset would have had Mason Gudger’s signature on it. He sprinted through a small opening from his own 2-yard line late in the second quarter, finishing in the end zone for a 98-yard score to tie the game at 7-7.

“I couldn’t believe the 98-yarder,” Witten said. “We had him stuffed.”

Late in the third quarter, Gudger went left on a sweep and got to the edge. Seventy-five yards later, he was crossing the goal line to put Greeneville ahead 20-17.

“They really broke out backs with twice, but we kept playing,” Witten said.

Take away those two runs and Gudger would have finished with 10 carries for 27 yards. With them, he totaled 200 yards rushing.

OTHER STATS OF NOTE

It was another standout performance for Russell. He finished with 16 carries for 81 yards and also authored a drive-stopping interception in the first quarter.

Jake Roberts caught two passes for 44 yards and Braden Holly had two catches for 40 yards. Both players produced a key catch to set up first-and-goal situations on drives that ended with touchdowns.

Sean Smithdeal had a hand in the win. He booted a career-long 31-yard field goal to put the Cyclones ahead 10-7 on the last play before halftime. Smithdeal also made all three of his extra-point attempts.

Greeneville outgained Elizabethton, 374-267. Quillen finished 7 of 16 passing for 140 yards while rushing for 38 yards on 11 attempts.

If someone said prior to Friday’s football game that Greeneville would gain over 100 yards more than Elizabethton, score three touchdowns of o…