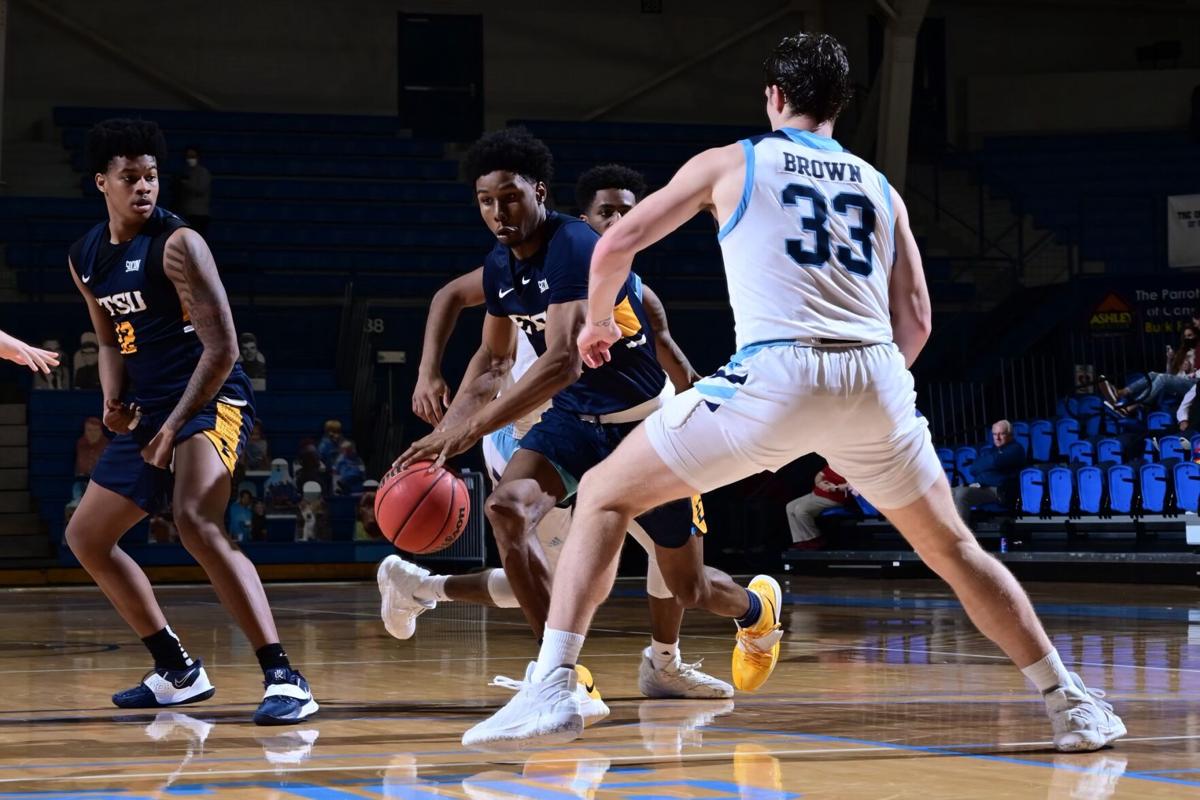 ETSU’s Serrel Smith looks to get past The Citadel’s Hayden Brown. (Photo by Cameron Pollack, The Citadel) 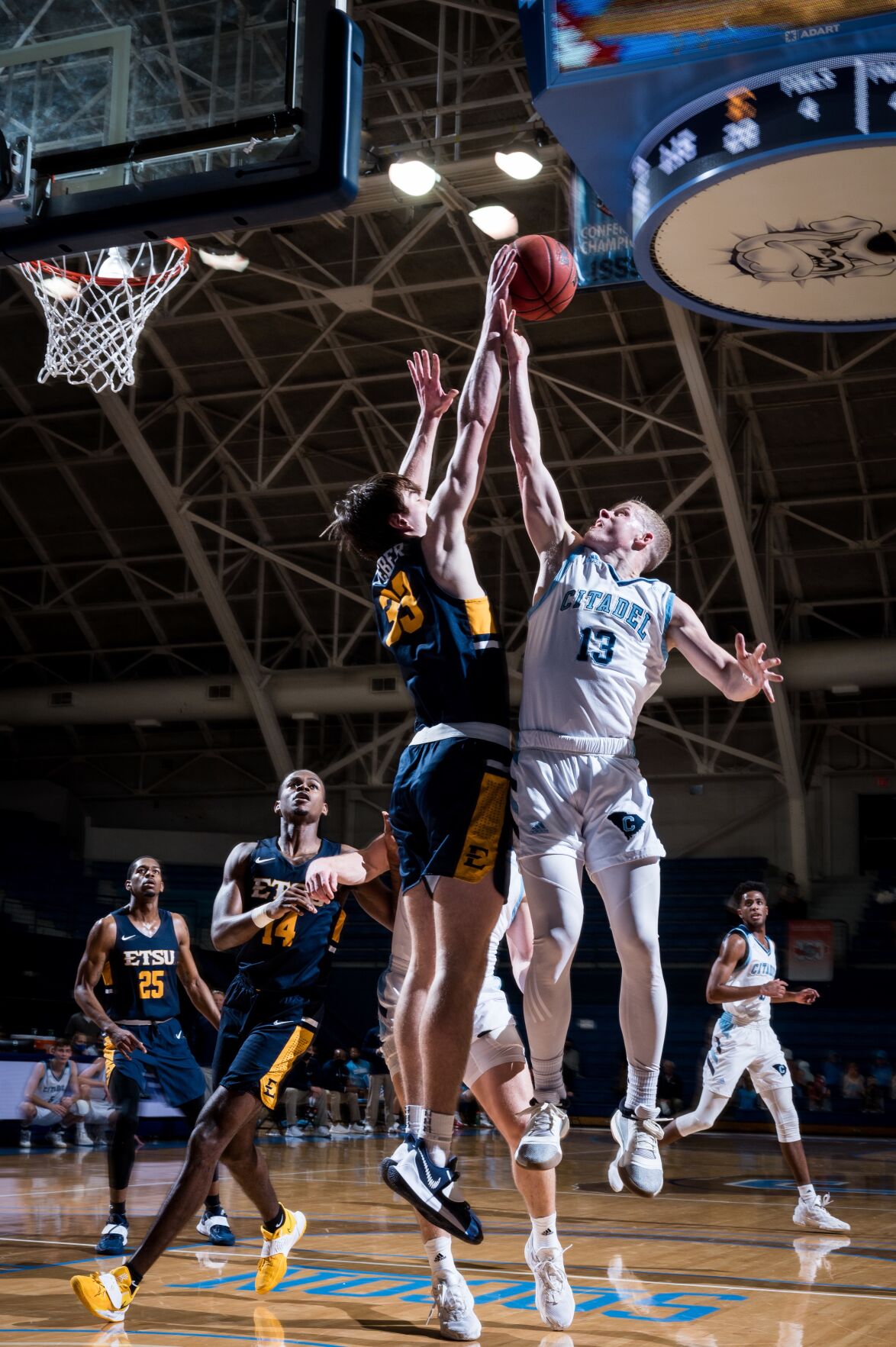 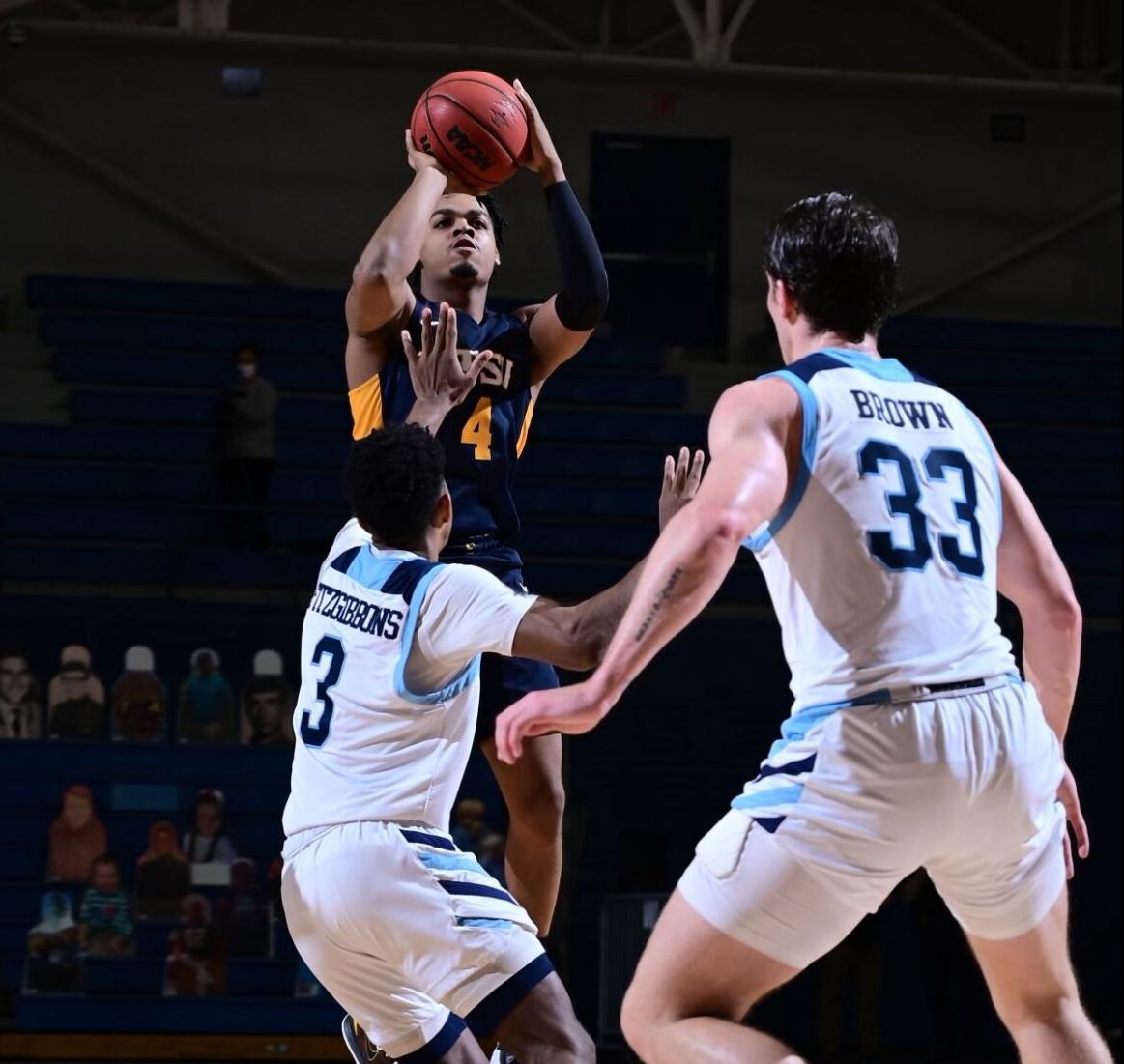 ETSU's David Sloan goes up for a shot.  (Photo by Cameron Pollack, The Citadel)

ETSU’s Serrel Smith looks to get past The Citadel’s Hayden Brown. (Photo by Cameron Pollack, The Citadel)

ETSU's David Sloan goes up for a shot.  (Photo by Cameron Pollack, The Citadel)

The going is getting tougher for the East Tennessee State men’s basketball team.

Hayden Brown had 21 points and 11 rebounds — both right around his average — and The Citadel handed ETSU its second Southern Conference loss in a row Wednesday night with a 79-71 decision at McAllister Fieldhouse in Charleston, South Carolina.

The Bucs, who lost at home to Chattanooga on Saturday, fell to 11-8 overall, 7-4 in the SoCon and are one game behind league leader UNCG in the loss column. The Citadel, which had previously beaten Wofford and Chattanooga at home, is 11-7, 4-7.

“I’m trying to do some things that were successful for our team last year and in the past,” ETSU coach Jason Shay said. “With a whole new team, it’s difficult. I have to simplify things and try to right the ship. We’re trending in the wrong direction at this time of year.”

The Citadel used a 12-0 run midway through the second half to seize control. That left the Bulldogs up 58-49. The Bucs cut it 68-66 but never could catch the Bulldogs.

Ledarrius Brewer scored nine consecutive ETSU points down the stretch, but couldn’t get his team over the hump. Brewer finished with 21 points to lead the Bucs, going 9 of 21 from the field. David Sloan added 15 and Vonnie Patterson had 13, including ETSU’s first five.

Damari Monsanto, who has been carrying the scoring load for the Bucs with five games in a row with at least 20 points, was held scoreless. He missed all seven of his shots.

“For them to hold him scoreless, that puts the onus on other guys to score,” Shay said. “We didn’t have enough guys efficient enough. LA (Ledarrius Brewer) took 21 shots for 21 points. Sloan took 15 shots for 15 points.”

Monsanto did tie for the team lead with eight rebounds, the same amount Silas Adheke had.

STAT OF THE GAME

The Citadel blocked 10 of ETSU’s shots with Stephen Clark getting four. He’s had nine blocks in the two games between the two teams.

“I thought we missed at least a half-dozen or more point blank shots,” Shay said. “We work on finishing. We work on playing through contact, hitting them with the pad. They just did a better job of converting.”

STAT OF THE GAME, PART II

The Citadel came into the game as the most prolific 3-point shooting team in the country, and for the second time this season, the Bucs out-shot the Bulldogs, going 8 for 25. The Citadel was 8 of 26.

The Citadel led by as many as seven points before the Bucs clawed back and took a 30-29 lead on a Brewer layup with 58 seconds left in the first half. It was ETSU’s first advantage since the early going.

Ty Brewer’s 3-pointer with 16 seconds remaining left the Bucs up 33-31 at halftime.

Ledarrius Brewer had 12 points by halftime. That was important for the Bucs, considering their leading scorer had been held to eight points in each of the last three games.

Fletcher Abee had 17 points for The Citadel, while Kaiden Rice added 14. Brown, who leads the SoCon in scoring and rebounding, also had six assists.

The Citadel out-rebounded the Bucs 41-38 and made eight more free throws. The Bulldogs shot 49% while the Bucs made 38%.

The much awaited rematch with Wofford happens Saturday at Freedom Hall with a 4 p.m. tip time. The Terriers beat ETSU 67-62 on Feb. 1.

The Citadel is at Chattanooga on Saturday. The Mocs beat Wofford on Wednesday night.

“It’s going to be a long and thoughtful bus ride home.”

The Citadel at Chattanooga, noon