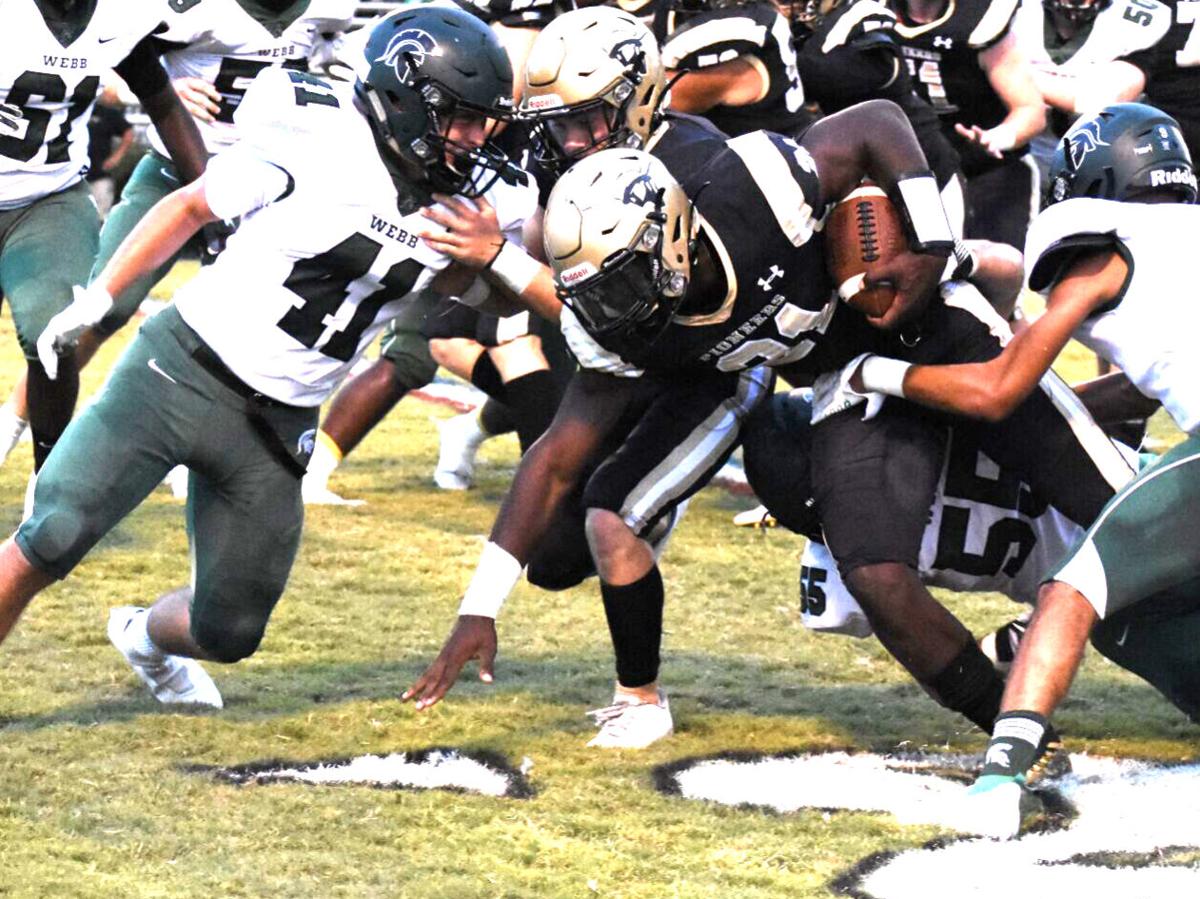 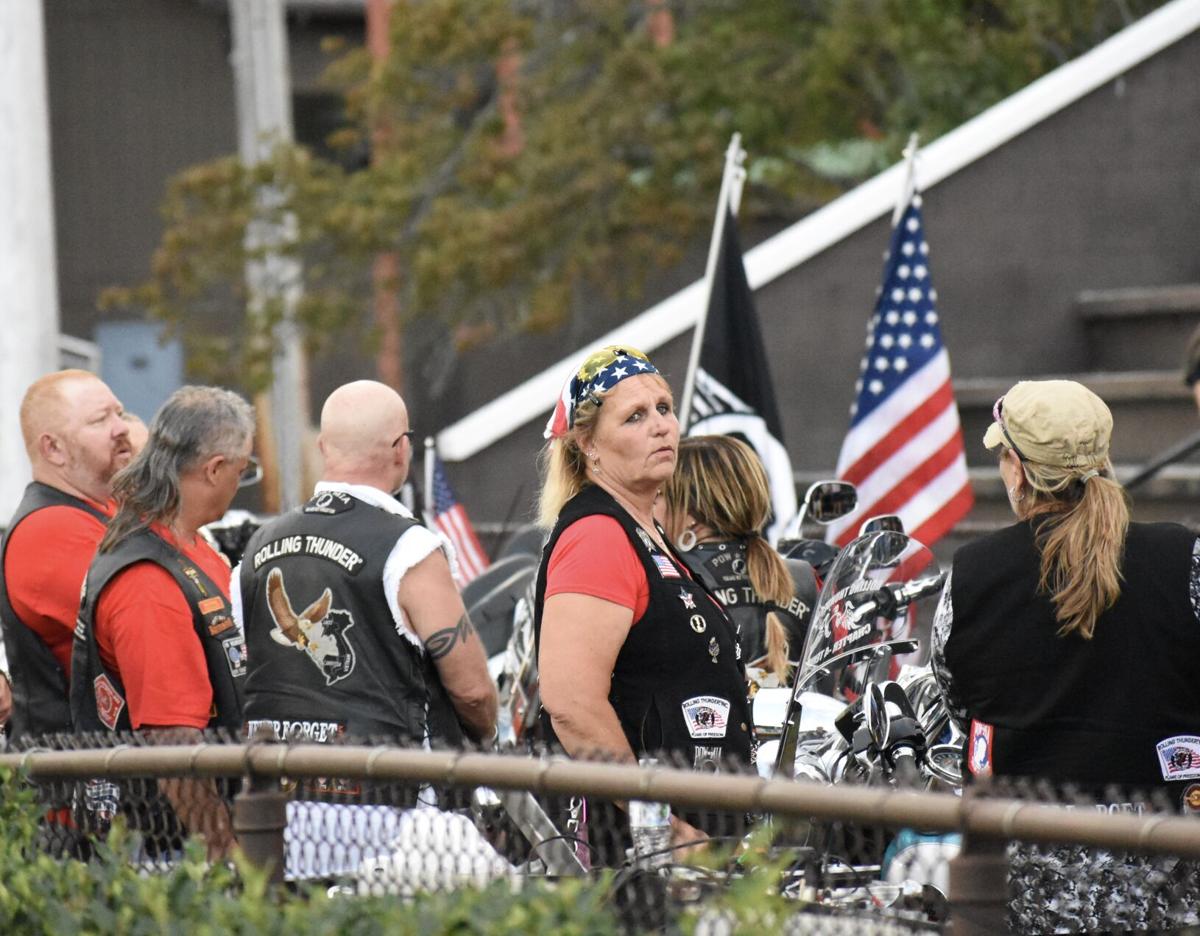 A woman member of the Rolling Thunder looks on during the playing of Lee Greenwood’s “God Bless the USA” in the pregame ceremonies. 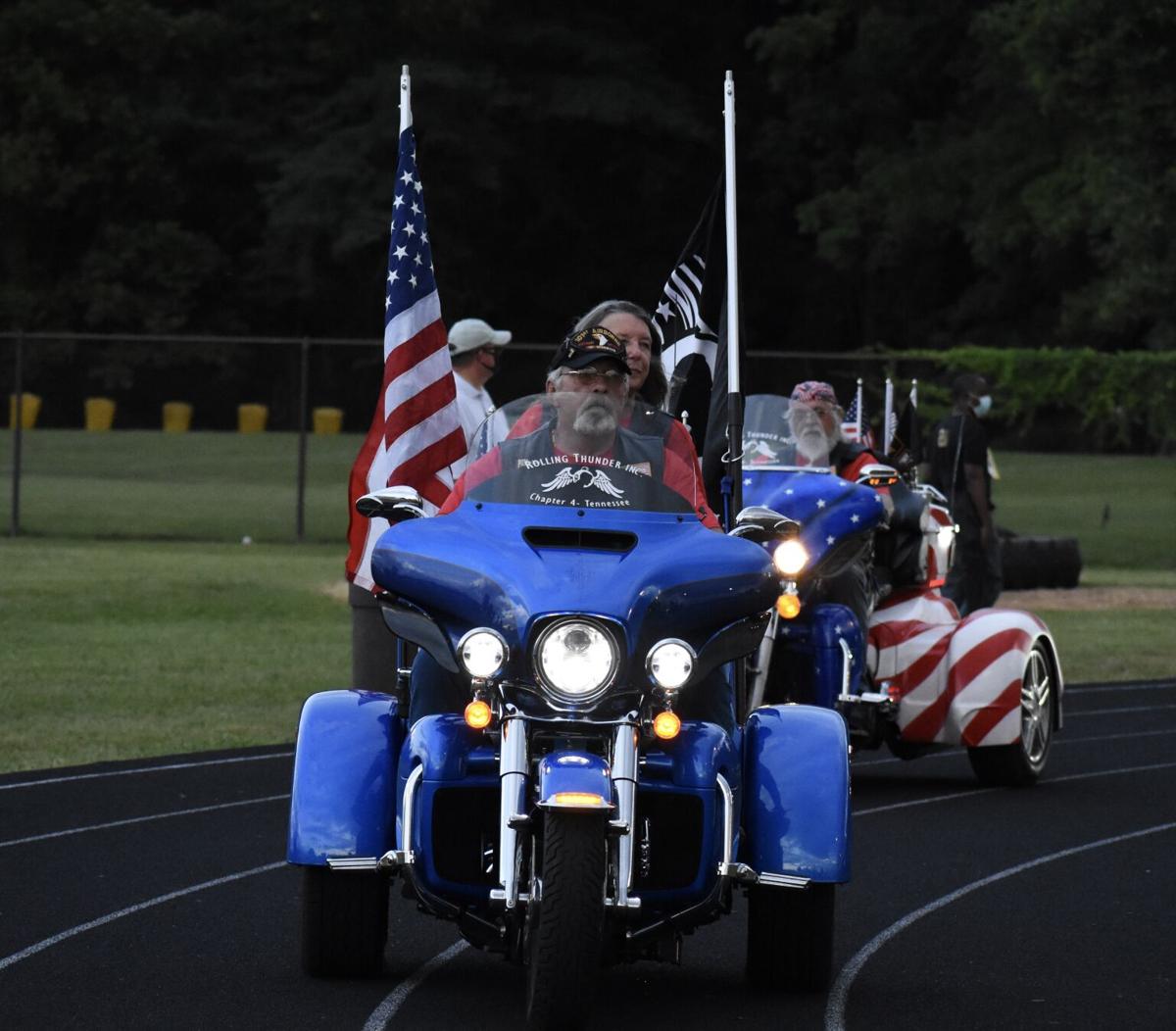 A large contingent showed up Friday for Crockett’s pregame tradition of Rolling Thunder. 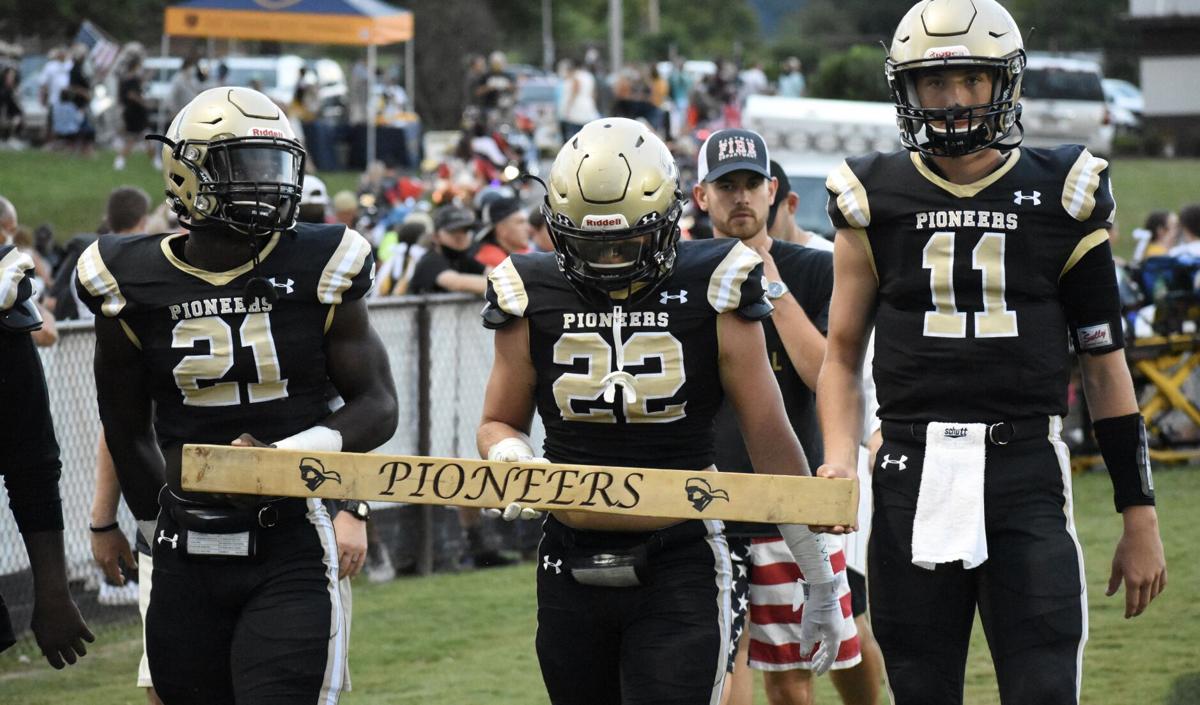 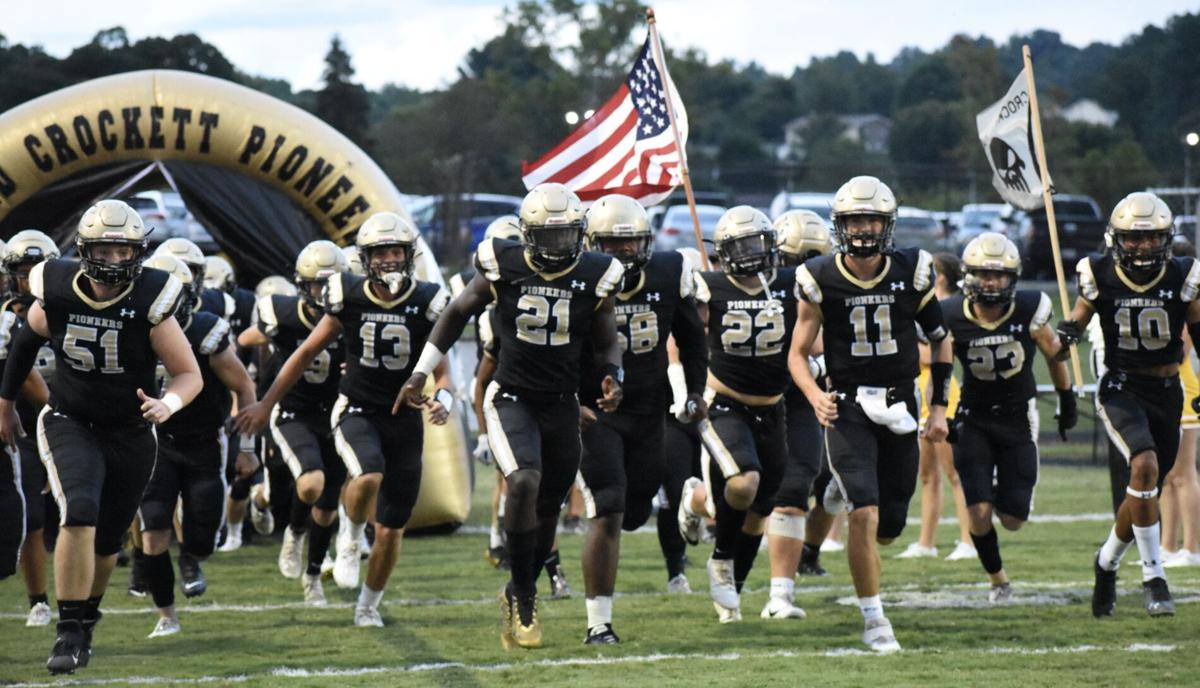 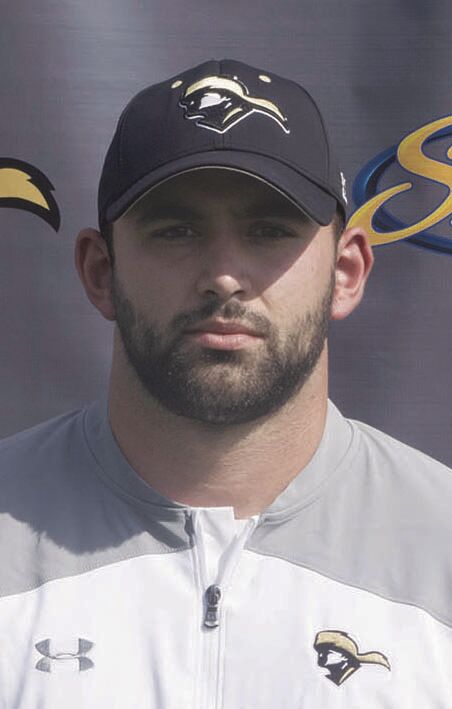 A woman member of the Rolling Thunder looks on during the playing of Lee Greenwood’s “God Bless the USA” in the pregame ceremonies.

A large contingent showed up Friday for Crockett’s pregame tradition of Rolling Thunder.

History was made on Friday night as the David Crockett football team thumped Knox Webb, 31-7.

Pioneers head coach Hayden Chandley became the all-time winningest coach in the history of the program, tallying his 21st victory.

“What a performance by our defense,” Chandley said. “I don’t know what their total yards were, but with their offense, they’re hard to prepare for.

“Kudos to our kids for answering the bell and responding this week. We’ve got great kids and I’m blessed to be here.”

Prince Kollie was again a workhorse for the Pioneers, racking up 187 yards on 17 carries and two touchdowns.

Senior quarterback Mason Britton continued to improve, going 10-for-15 through the air with 158 yards and a touchdown.

The Spartans (2-2) fumbled the ball on the second play from scrimmage and gave the ball to the Pioneers on the Webb 31-yard line.

Crockett quickly marched down the field in five plays as Britton hit Brayden Reid on a 17-yard pass.

On the ensuing drive, the Pioneer defense made its first big stop of the evening, halting a Spartan drive after 11 plays and 50 yards as quarterback Charlie Robinson’s pass fell to the ground on fourth down.

Crockett (2-2) took the ball inside the Webb five and decided to hand it to the Notre Dame commit Kollie sweeping to the far side of the field.

Initially, it looked as if Kollie was caught between a rock and a hard place, but he reversed field and made six Spartans miss on his way to the end zone.

The crowd and Pioneer benched hollered in excitement as they watched Kollie make another highlight-reel play.

“I made a terrible play call and he made me look like a genius,” Chandley said. “He’s a special young man and we’re really glad he’s a Pioneer.”

The Pioneers took the 14-0 lead into the break.

Webb forced Crockett to punt on the first drive of the second half and matriculated the ball from 77 yards to the goal line. The drive was capped with a spectacular catch from Ford Wagner as he used every bit of his 6-foot-3 frame to go up and snatch the pigskin down from 21 yards out in the back of the endzone.

“That double-handoff out of the Wing-T was really the only thing they were getting us on,” Chandley said. “We made an adjustment and they really liked that counter. The kids really took to the coaching.”

After Webb boomed the kickoff into the endzone, Kollie decided he wanted to put an end to what looked like a Webb rally.

On the first play of the drive, Kollie burst through the line of scrimmage and took it 80 yards for the touchdown.

“I’m glad he’s on our team,” Chandley said. “There’s a reason he’s going to Notre Dame and if people haven’t gotten a chance to see him, they need to come and watch this kid live.

Crockett’s next drive was highlighted by a 56-yard screen pass and a later score by Brendan Reid. Edison Gouge rounded out the scoring with a late 26-yard field goal.

The Pioneers will be on the road next week in a Region 1-5A conference game against Cocke County.