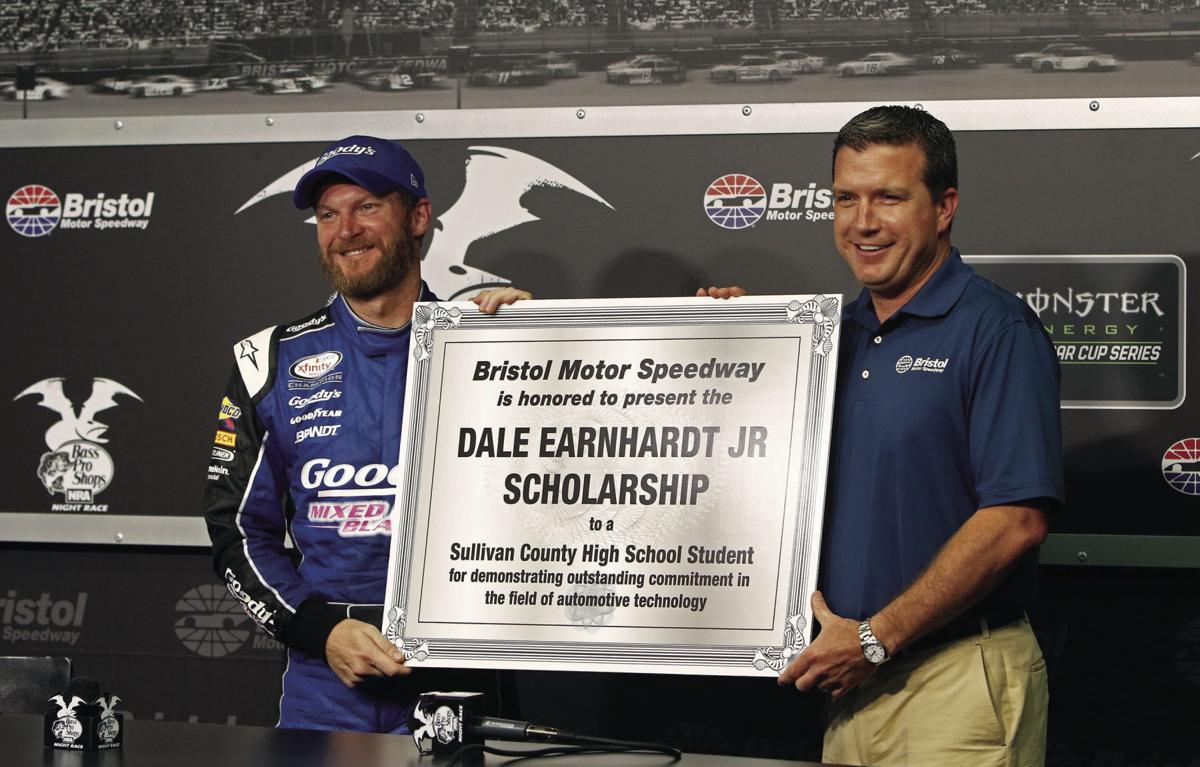 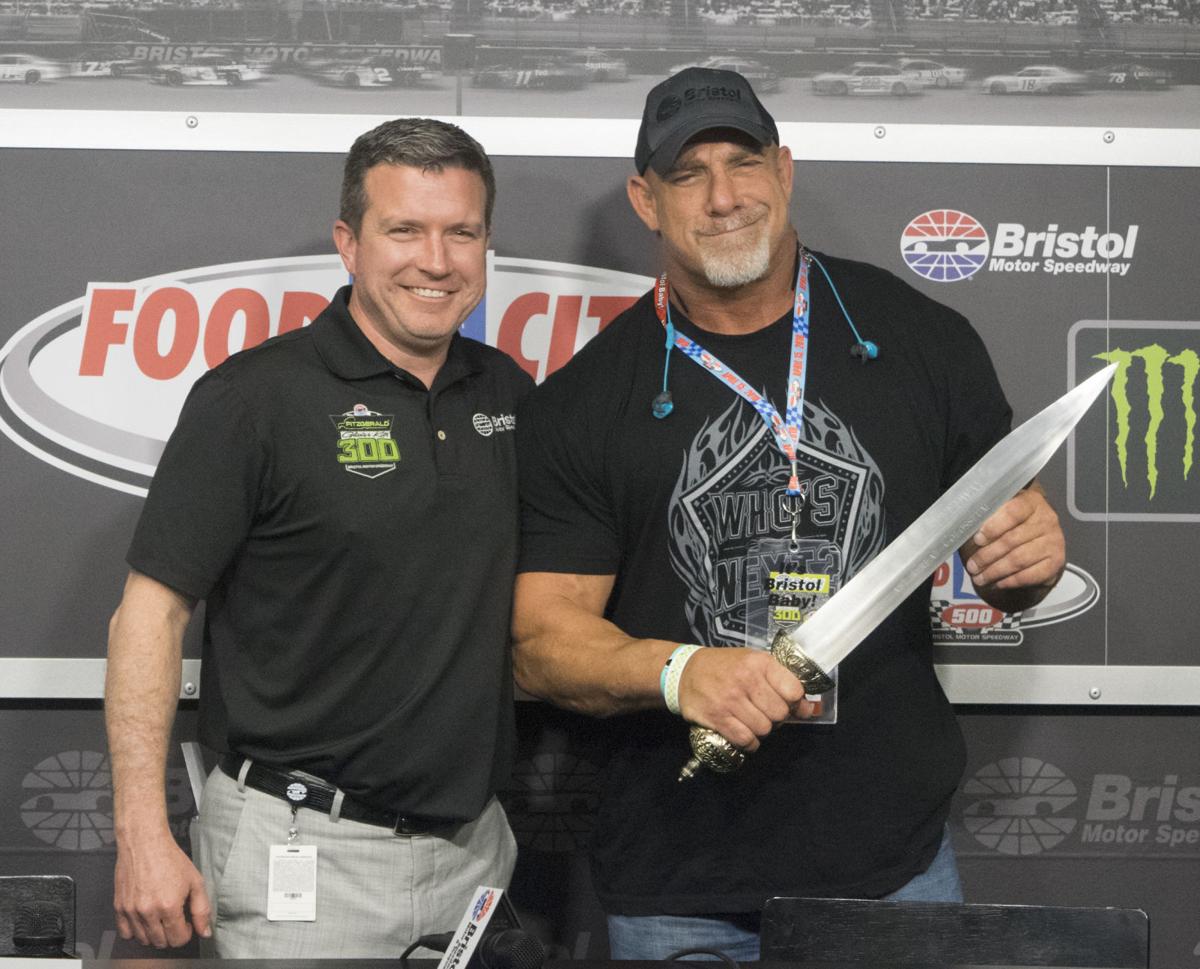 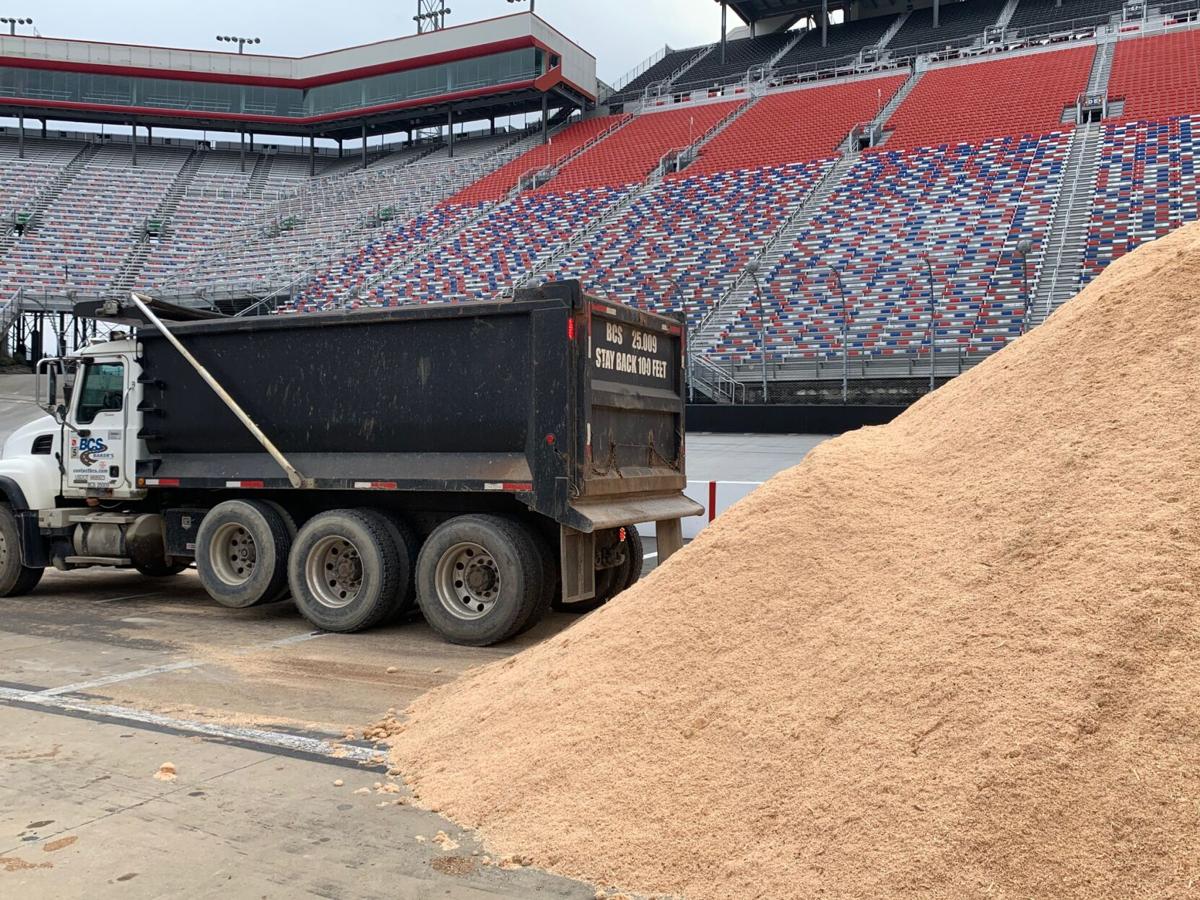 Baker Construction Services drop off a load of sawdust at the Bristol Motor Speedway infield in preparation of the track's racing surface being converted to a dirt track. 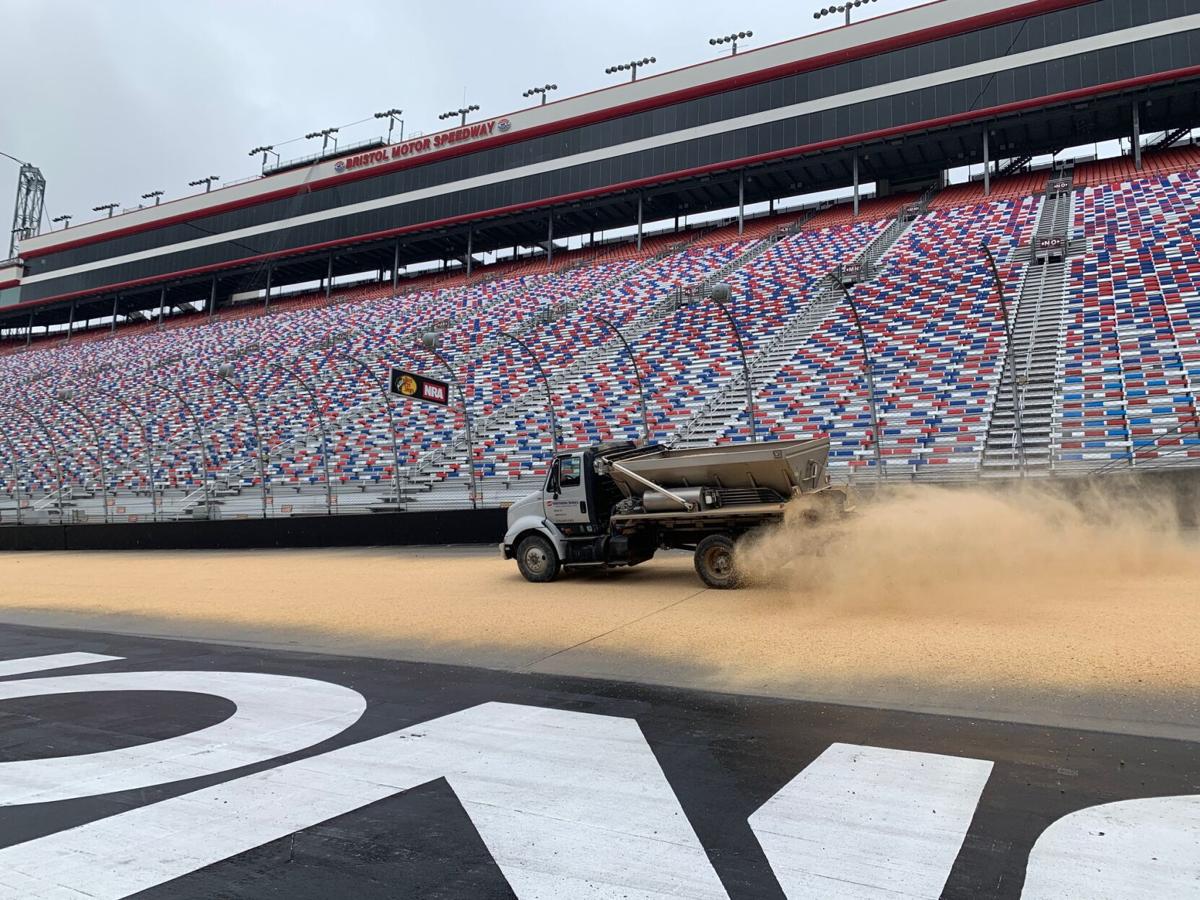 Sawdust is spread over the racing surface at Bristol Motor Speedway before the track is covered in dirt for the upcoming Food City Dirt Race. The sawdust makes it easier for the dirt to be removed later. 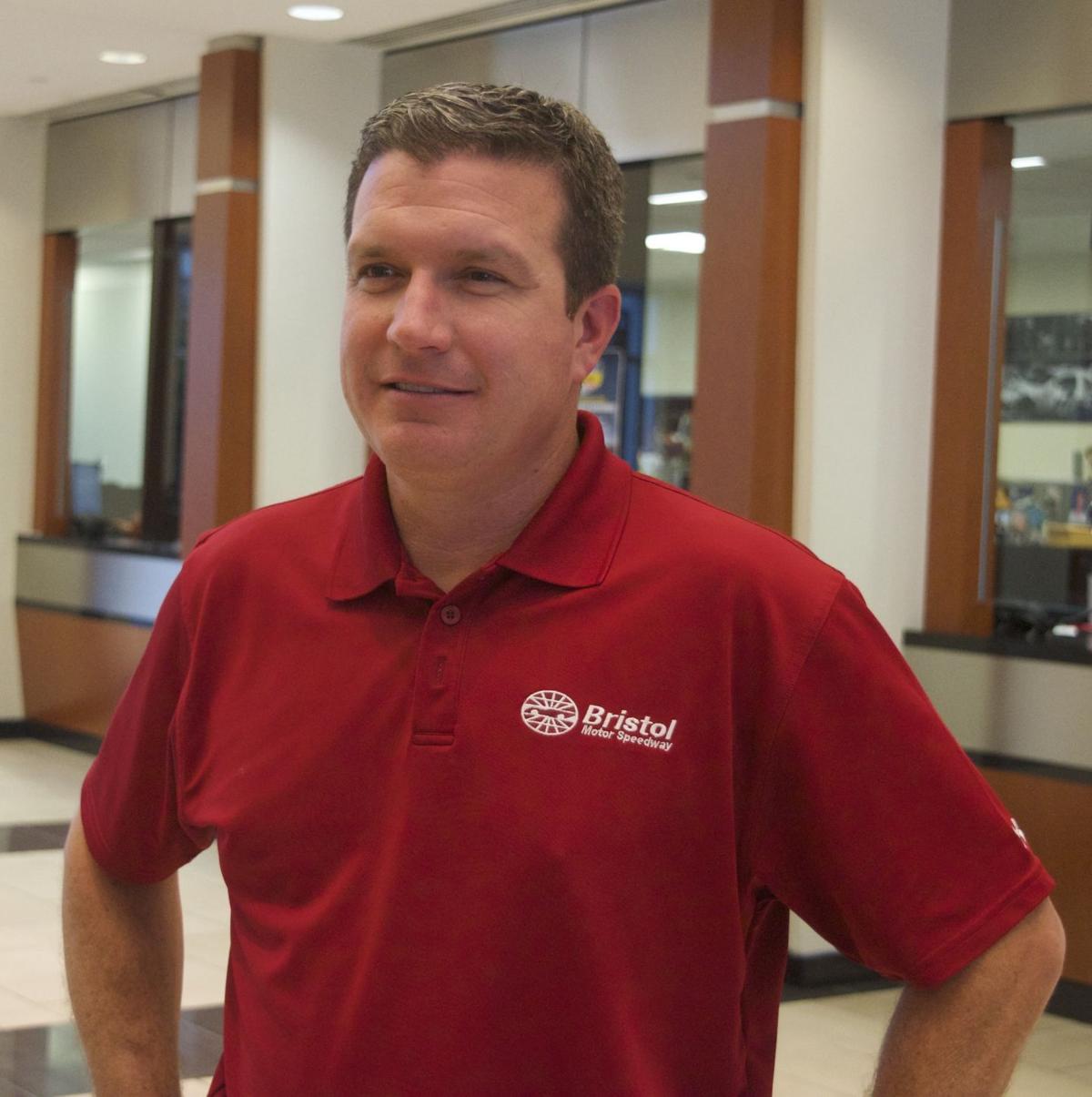 Baker Construction Services drop off a load of sawdust at the Bristol Motor Speedway infield in preparation of the track's racing surface being converted to a dirt track.

Sawdust is spread over the racing surface at Bristol Motor Speedway before the track is covered in dirt for the upcoming Food City Dirt Race. The sawdust makes it easier for the dirt to be removed later.

Jerry Caldwell has overseen some of the largest events in Bristol Motor Speedway history since taking over as the facility’s general manager in 2010.

The North Carolina native first came to BMS as part of the sales and marketing department in 1997. He was promoted to the vice president of corporate sales in 2009.

In his current position, which includes executive vice president, he has been innovative as part of the leadership group that put together the Battle at Bristol football game between Tennessee and Virginia Tech in 2016. That game drew an NCAA-record attendance of 156,990.

The Bass Pro Shops NRA Night Race is routinely one of the most attended events on the NASCAR calendar and in 2020, BMS stepped up during the pandemic to host the NASCAR All-Star Race.

The latest project is a blast from the past as the BMS racing surface will be converted to host the Food City Dirt Race in March. It will be NASCAR’s first race on dirt since Richard Petty’s win at the North Carolina State Fairgrounds in September 1970 and the first time BMS has been covered in dirt in two decades.

Since that initial announcement, the track has confirmed races for both the World of Outlaws Late Models and Sprint Cars. There is also the inaugural Bristol Dirt Nationals which will feature racing from eight different classes.

Despite his busy schedule, which includes supporting his kids’ games, Caldwell recently took time to answer some questions about his love of NASCAR and other sports.

WHO WAS YOUR FAVORITE NASCAR DRIVER GROWING UP?

WHAT IS YOUR FAVORITE NASCAR TRACK OUTSIDE OF BRISTOL MOTOR SPEEDWAY?

Caldwell: Bristol is always No. 1. But, my non-BMS favorite event to attend in years past was always the All-Star Race in Charlotte…love the energy and excitement. I’m always up for a trip to Sonoma, love road course racing and the area. These days, I have a great love for the Nashville Fairgrounds Speedway.

WHAT IS YOUR FAVORITE SPORT OUTSIDE OF AUTO RACING?

Caldwell: I love watching most sports. I would say college football and golf. These days, I spend a lot of time watching my kids play soccer, basketball, golf and softball.

DID YOU PLAY SPORTS GROWING UP?

Caldwell: I grew up playing golf, baseball, football, basketball, tennis and swimming. I focused on golf as I got older and played golf at King University.

HOW LONG HAVE YOU LIVED IN THE TRI-CITIES AND WHAT’S THE BEST PART?

Caldwell: I’ve been in the area for 27 years. The beauty of our region and the people.

WHAT IS YOUR PROUDEST ACHIEVEMENT WHILE AT BMS?

Caldwell: Sounds cliché but every time we pull off a big event, I’m so proud of the team that we have at BMS. Whether it’s a big NASCAR or NHRA weekend, hosting three NASCAR weekends (like 2020), concerts, football games or welcoming local high schools for graduations.

We are so blessed to have such a talented and passionate team and I love having that sense of accomplishment with them.