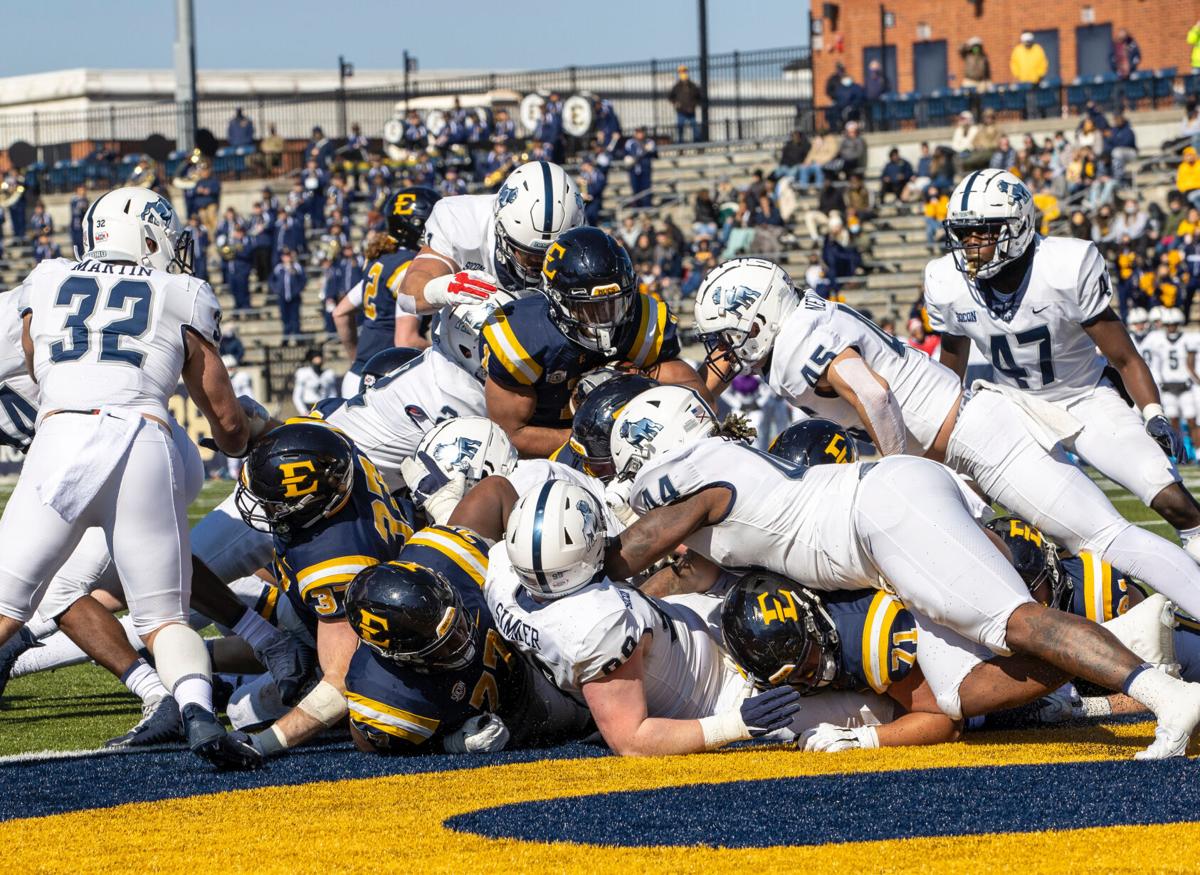 Quay Holmes goes in for an East Tennessee State touchdown Saturday at Greene Stadium in Johnson City. Holmes finished the day with 125 yards and two touchdowns in the Bucs’ victory. (Tom Raymond photo) 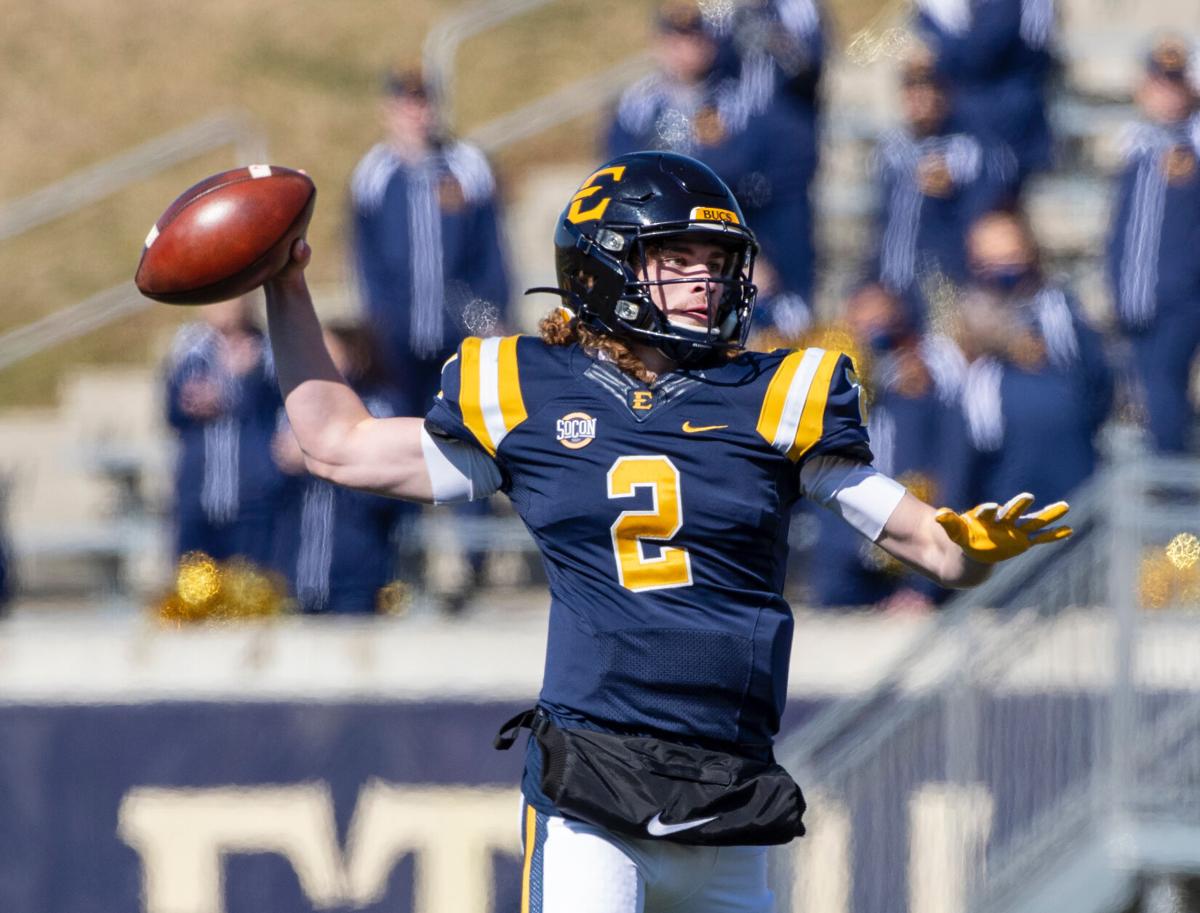 ETSU’s Tyler Riddell threw for the winning touchdown with 5:38 left on Saturday. 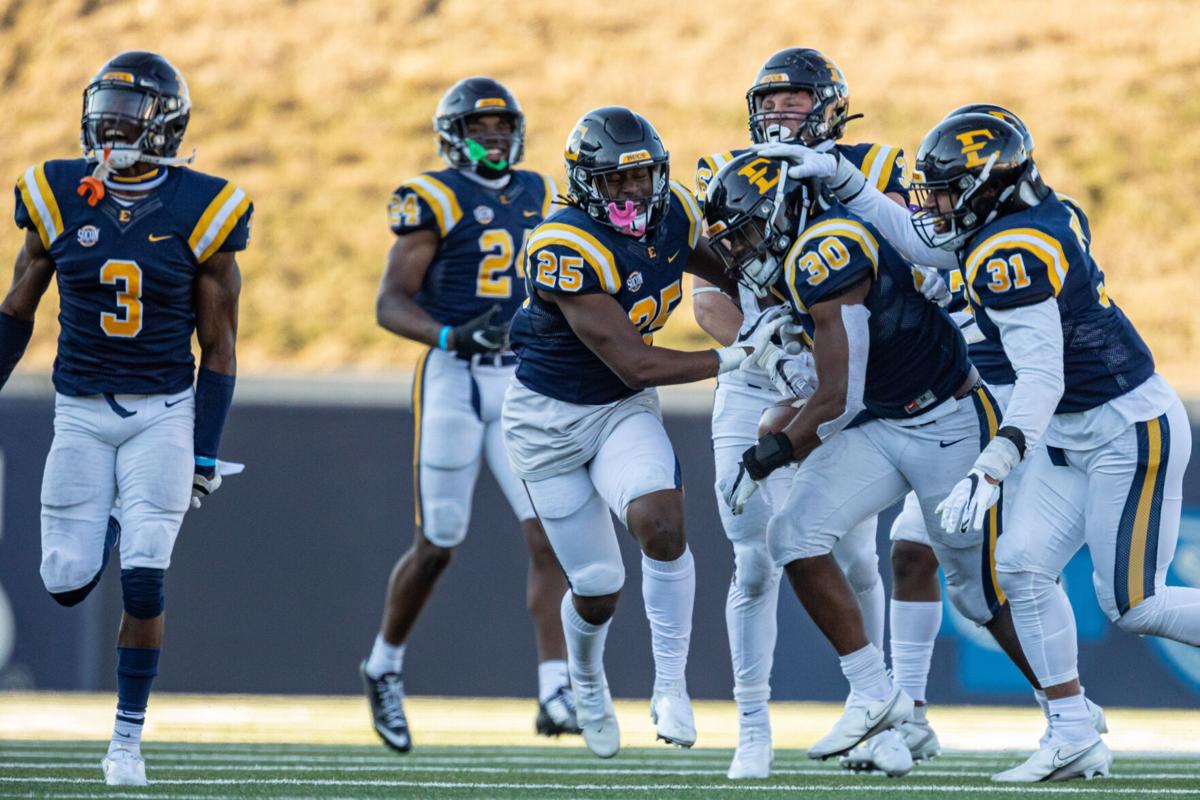 East Tennessee State’s Donovan Manuel (30) is swarmed by his teammates after his game-clinching interception on Saturday. 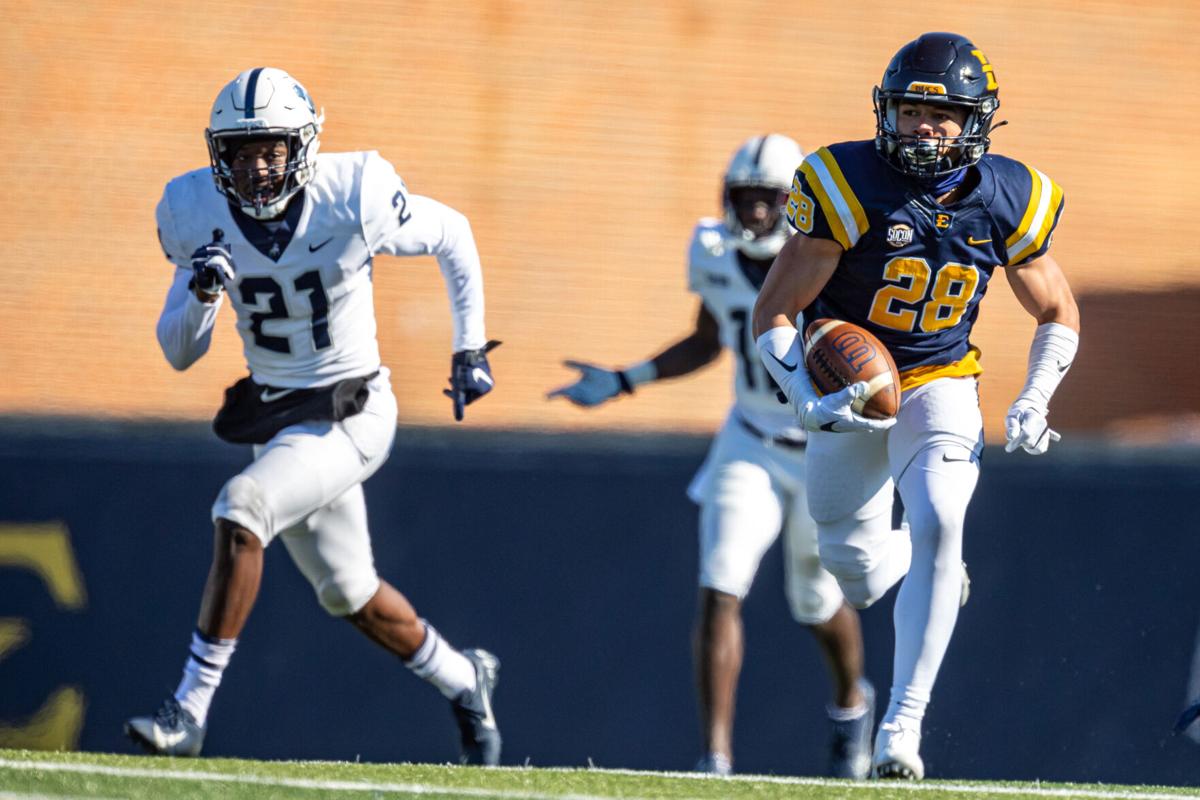 ETSU’s Alijah Huzzie breaks free for a big punt return that set up a Bucs’ touchdown.

Quay Holmes goes in for an East Tennessee State touchdown Saturday at Greene Stadium in Johnson City. Holmes finished the day with 125 yards and two touchdowns in the Bucs’ victory. (Tom Raymond photo)

ETSU’s Tyler Riddell threw for the winning touchdown with 5:38 left on Saturday.

East Tennessee State’s Donovan Manuel (30) is swarmed by his teammates after his game-clinching interception on Saturday.

ETSU’s Alijah Huzzie breaks free for a big punt return that set up a Bucs’ touchdown.

It took a while to get going, but East Tennessee State figured out a way to win.

Tyler Riddell’s 59-yard touchdown pass to Julian Lane-Price with 5:28 left lifted ETSU to a 24-17 victory over Samford in the Southern Conference’s return to football Saturday at Greene Stadium.

The Bucs won after falling behind 14-0 early as their defense turned up the effort and held the usually powerful Bulldogs to three points over the final three quarters.

“It was one of the all-time best locker rooms, other than some of the national-championship celebrations,” ETSU coach Randy Sanders said. “We had a lot of guys very relieved, very happy to be playing football. It showed how happy they were.”

The winning touchdown came when Riddell caught Samford with 12 men on the field with a quick snap and took advantage of the free play. His deep pass to the sideline hit Lane-Price in the hands as the Bulldogs defender tried to jump the route.

Lane-Price, a former sprinter at West Greene High School, did the rest, galloping down the sideline for the go-ahead score.

PLAYER OF THE GAME

Donovan Manuel was all over the field for the defense. The sophomore linebacker tied for the team lead with nine tackles. He sacked Samford’s Chris Oladokun twice and his interception in the closing seconds iced the victory on a chilly day.

With 16 seconds left and Samford trying desperately to tie the game, Jalen Porter tipped Oladokun’s pass and it floated into the arms of Manuel.

“I was just trying to get around the ball,” Manuel said. “It looked like a beach volleyball. I was just waiting for it come to me. It felt good. I knew we sealed the deal once I caught it.”

STAT OF THE GAME

ETSU had 10 quarterback sacks, the most since the team had the same number at VMI in 2018.

In addition to Manuel’s two sacks, Olajuwon Pinkelton and Javion Heard also had two apiece, while Porter, Quinn Smith, Timmy Dorsey and Max Evans each had one.

The Bulldogs scored on their first two drives to take a 14-0 lead. The first drive was a 17-play masterpiece that went 88 yards and took 5:47 off the clock.

Dakota Chapman opened the scoring on a 5-yard touchdown pass from Oladokun. Jay Stanton’s 1-yard scoring run made it 14-0.

After a start that looked like a blowout was brewing, the Bucs’ defense stiffened, holding Samford to 37 yards on 19 plays in the second quarter.

Riddell started for the Bucs and threw the ball well, completing 5 of 7 passes in the first quarter. Riddell took two big hits on running plays, the second one ending in a lost fumble two plays after ETSU had moved to the Samford 5-yard line.

After the fumble, junior-college transfer Brock Landis came in with 9:49 left in the second quarter. His first two drives ended with punts after the team moved the ball five yards on each possession. He completed 1 of his 5 passes.

Riddell came back with 2:26 left in the second quarter and was at the helm as ETSU scored to get back into the game.

Riddell finished and completed 14 of 25 passes for 186 yards and the winning touchdown. He wasn’t intercepted and was sacked seven times.

The Bucs’ first touchdown was set up when they were the recipients of a favorable replay rule late in the second quarter.

Riddell threw a pass to Lane-Price, who lost control of the ball. After a scramble, Samford recovered the ball.

The Bulldogs were called for a late hit at the end of the play.

After a replay review, the officials said Lane-Price never had possession and the pass was incomplete.

That allowed ETSU to retain possession and the penalty still counted, giving the Bucs the ball on the Samford 21-yard line.

Five plays later, Holmes scored ETSU’s first touchdown of the season from a yard out, cutting Samford’s lead to 14-7 five seconds before halftime.

Huzzie also had an interception and nine tackles.

Samford went back ahead 17-14 on Mitchell Fineran’s 34-yard field goal in the third quarter before Keltner got the Bucs back to even with a 28-yard field goal on the first play of the fourth quarter.

Samford’s Oladokun completed 35 of 54 passes for 222 yards and a touchdown. He was intercepted twice.

The Bucs get a week off before returning to action March 6 with a game at Wofford. Samford takes on Western Carolina at home next Saturday.