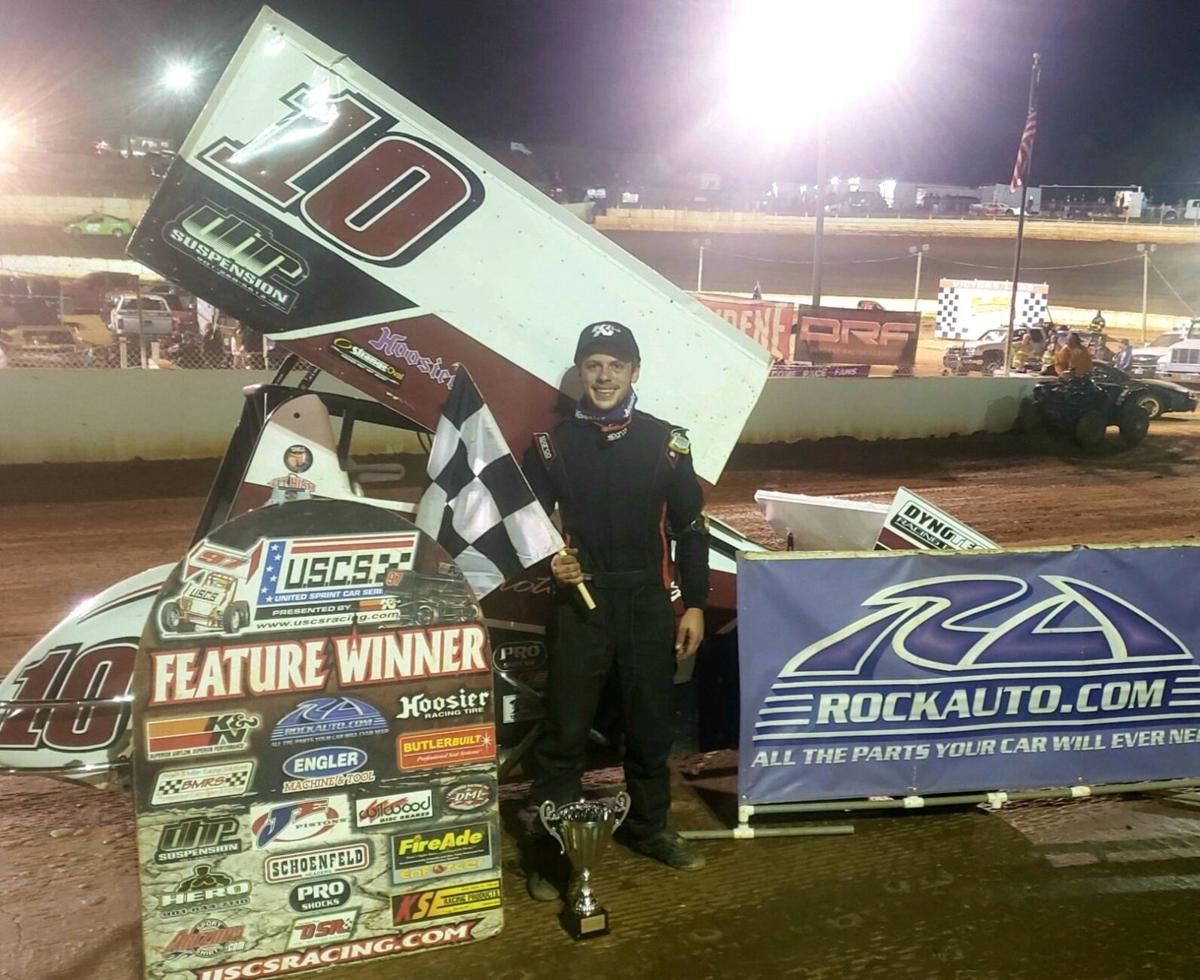 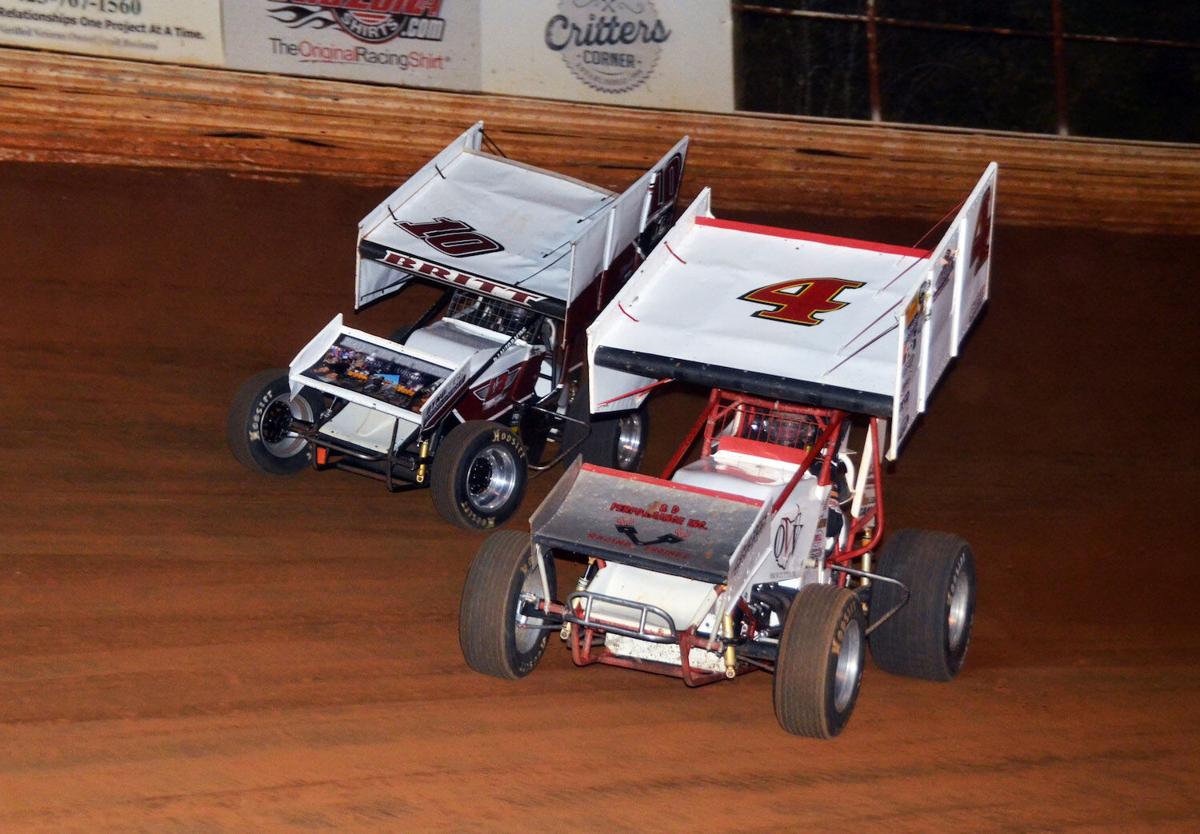 Landon Britt (10) goes to the high side of Danny Smith (4) at Volunteer Speedway.

Landon Britt (10) goes to the high side of Danny Smith (4) at Volunteer Speedway.

BULLS GAP — After five laps of back-and-forth slide jobs, Landon Britt got by Jared Horstman for the home state win in the United Sprint Car Series “Clash at the Gap” Saturday night at Volunteer Speedway.

Britt, an Atoka, Tenn., driver, in the white No. 10 winged sprint car, started on the pole in Saturday’s 30-lap main event, but quickly found himself emerged in a fierce battle with Horstman around the 4/10-mile dirt track.

With the extremely fast cars turning qualifying laps around 130 mph, fans were already on the edge of their seats. But, it was the back-and-forth action of Britt and Horstman trading the lead on numerous occasions that worked them into a frenzy. Britt got a big run on lap 15 for the winning pass.

“I knew he was there and he was fast,” Britt said. “I just tried to go to the top (of the track) and get the momentum. He tried to slide me the whole way, but coming off turn four, I was able to get the run to get around him. This place is so fast. You just have to find the speed and take it.”

Horstman, in the bright orange No. 17 machine, won Friday’s feature at Bulls Gap, making it a productive weekend for the Ohio driver. At the end of Saturday’s race, he barely edged North Carolina racer Eric Riggins Jr. for the runner-up spot.

“We definitely thought we had a shot at the win,” Horstman said. “Britt and I went back-and-forth, had a lot of fun and put on a heckuva show for the race fans.”

Sise retaliated by turning his car around, going the opposite direction and stopping in front of Ballenger’s black No. 29 machine and the rest of the field on the backstretch. Track officials made Sise pull his No. 73 car in the pits, while Ballenger went on to win the race.

Ballenger, a Sevierville racer, said it was just the latest chapter in his feud with Sise and his brother Zach.

“A couple of weeks ago, I slid up beside him. I hit him and had nowhere to go,” Ballenger said. “He got me back at 411 (Speedway) which is fine. We were racing hard going into (turn) 3 and we just barely hit. Hey, they don’t like me and I don’t like them. So, we will just keep it at that.”

Bradley Lewelling gave Ballenger another challenge for the win before finishing second with Gary Crittenden third. Josh Henry and William Blankenship rounded out the top five.

Blankenship was involved in his own dust-up when his No. 32 car slammed into the side of Johnson City driver Tim Maupin’s white No. 3 machine, sending it into the inside wall at the exit of turn 4.

Maupin recovered to finish 10th in the 19-car field. Trevor Sise finished 14th after his wreck. Race winner Ballenger put it in perspective.

“It’s getting the end of the season and everybody is frustrated with each other,” he said. “But if nothing ever happened, it would be boring.”

Kentucky racer Brandon Kinzer led flag-to-flag in winning the Open Wheel Modified feature. His black No. 18 machine fended off early challenges from Wayne James in the yellow No. 4 car. Michael Asberry made a pass on the high side off the final turn to take second place away from James. Brandon James and Ervin Vance rounded out the top five.

Adam Mitchell from Knoxville led all 20 laps in the Sportsman Late Model feature to sweep the weekend. The Friday and Saturday wins were his first and second of the season. Addison Cardwell got around Wayne Rader for second, while Warren McMahan and Billy Branch took the fourth and fifth spots.

In a battle of equally matched Camaros, Tracy Wolfe held off Josh Henry to win the Street Stock feature. Wolfe, a Bean Station driver, maintained an advantage on the high side of the track. Henry pulled beside him on the bottom of the track throughout the race, but was never able to complete the pass. John Stevens, Shawn Henry and Bo Smith finished third through fifth.

A vicious crash by Scotty Gosnell marred the Front Wheel Drive race. Fortunately, the North Carolina racer was able to get out of his damaged No. 42 car. Still shaken, he sat down on the track surface and was attended to by emergency personnel.