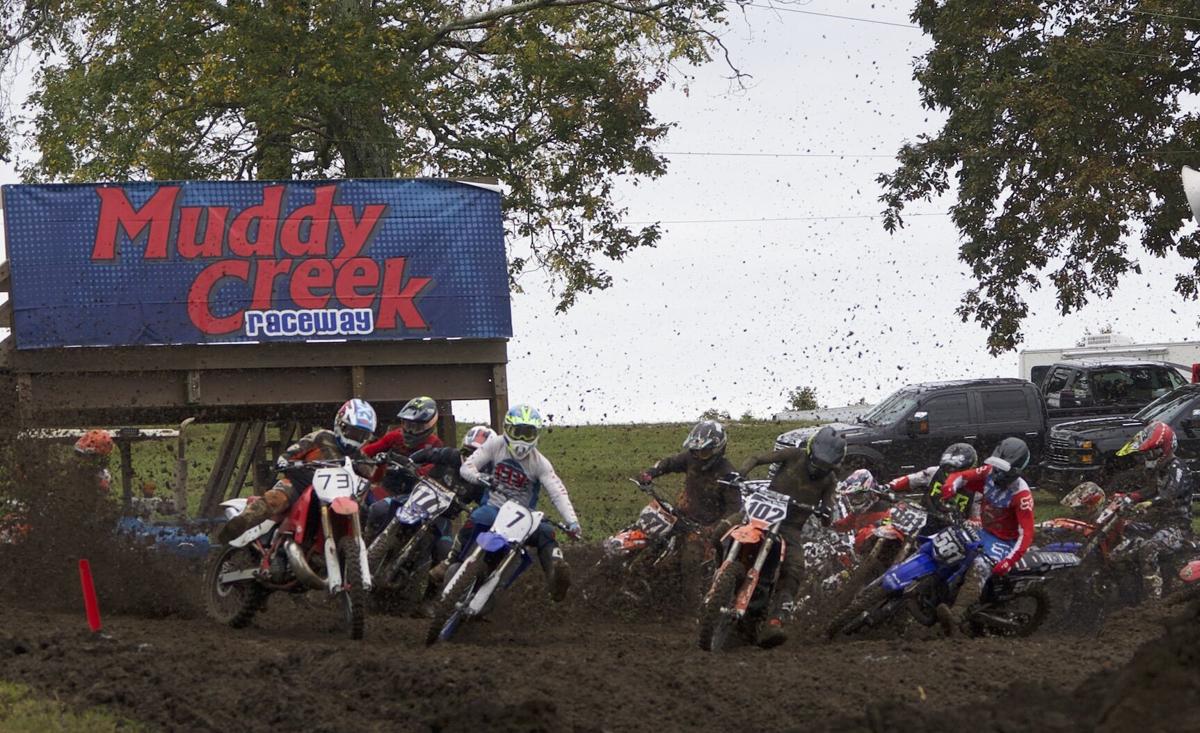 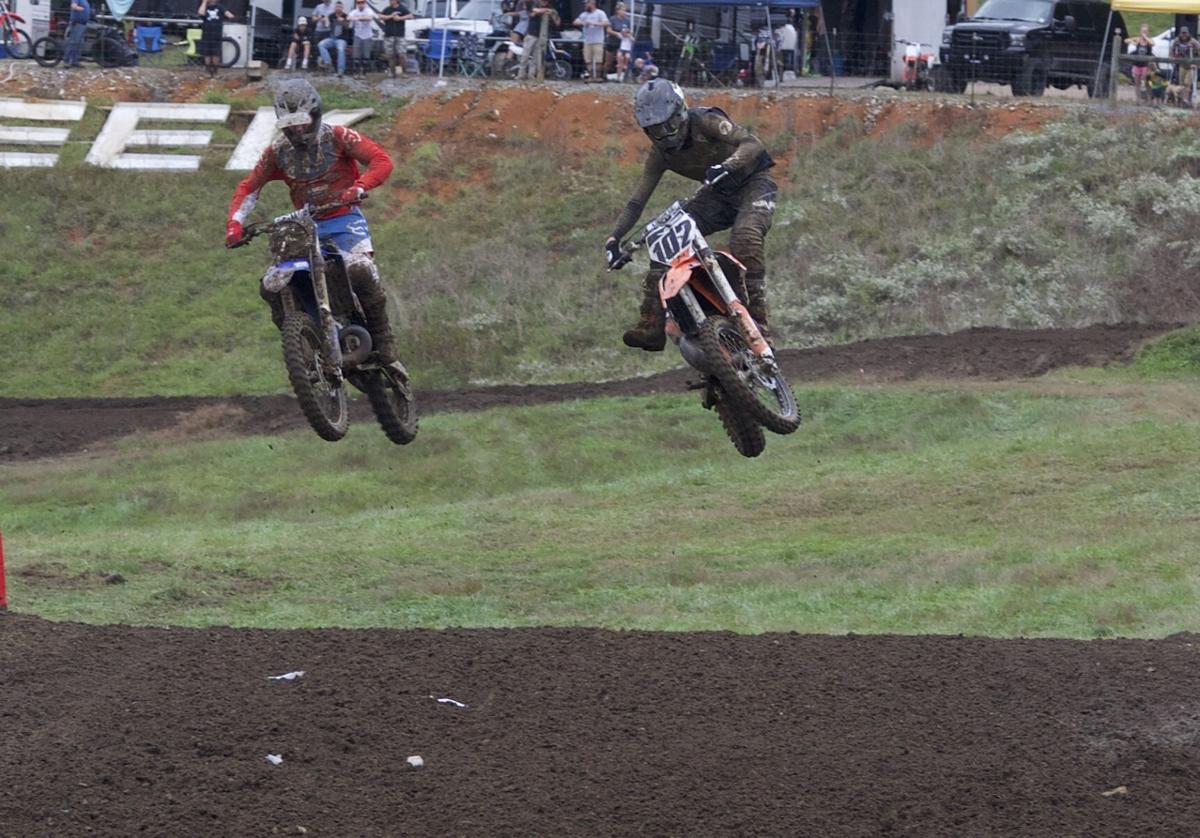 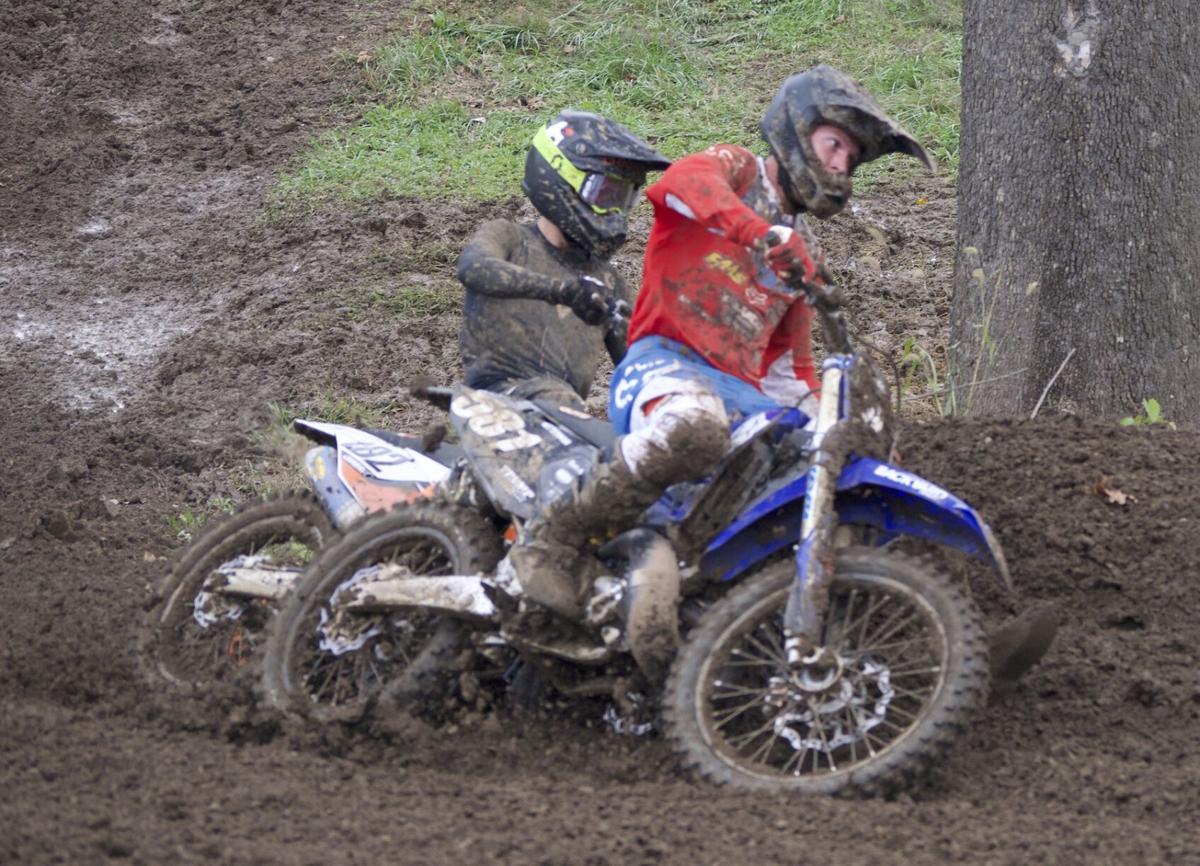 Kyle Bitterman goes to the outside of Jack Chambers to take the lead in the Cody Gragg Memorial Race at the Suzuki Top Gun Showdown at Muddy Creek Raceway. 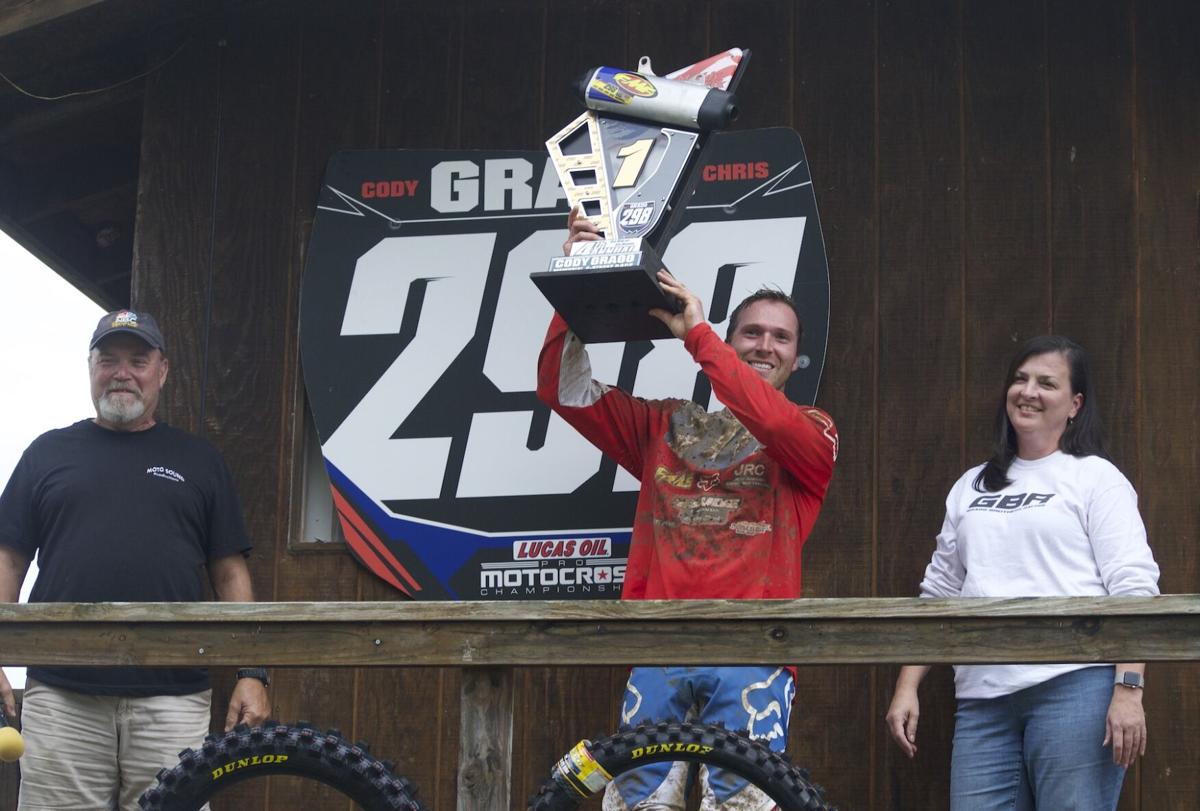 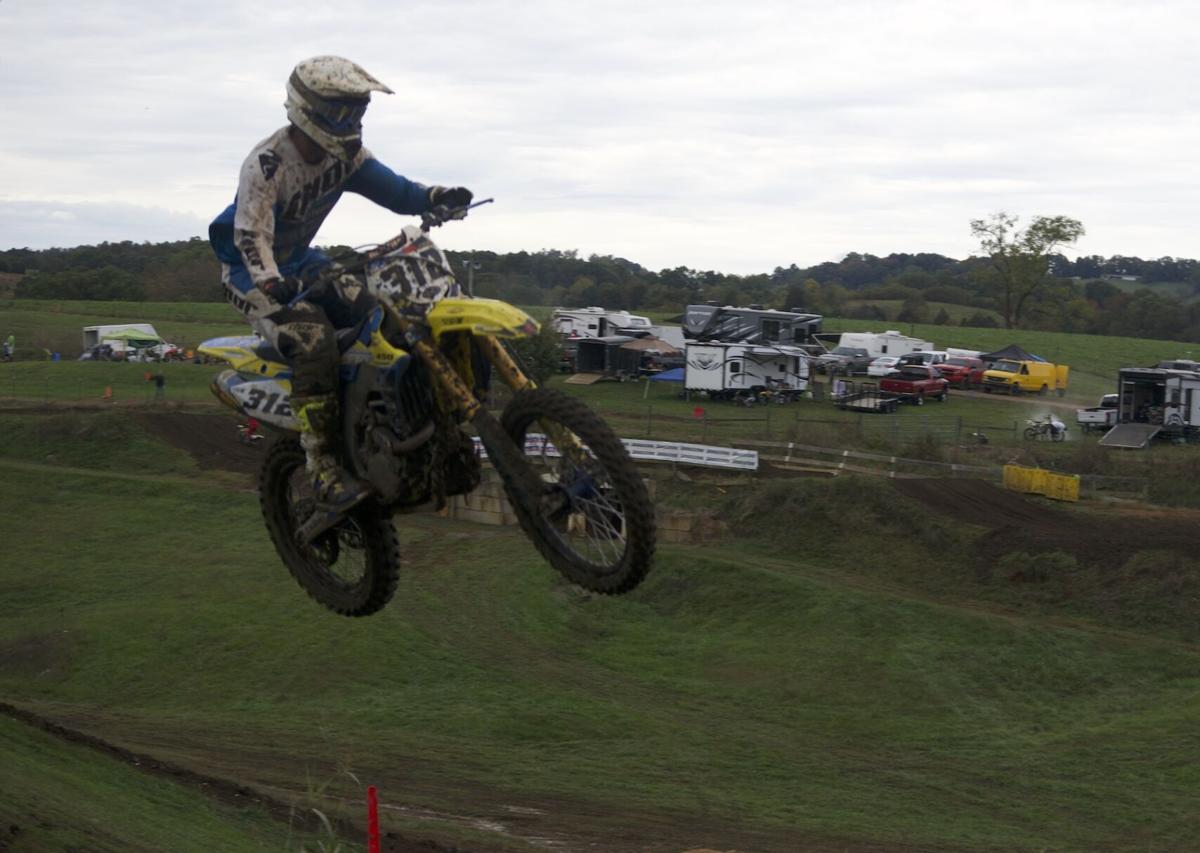 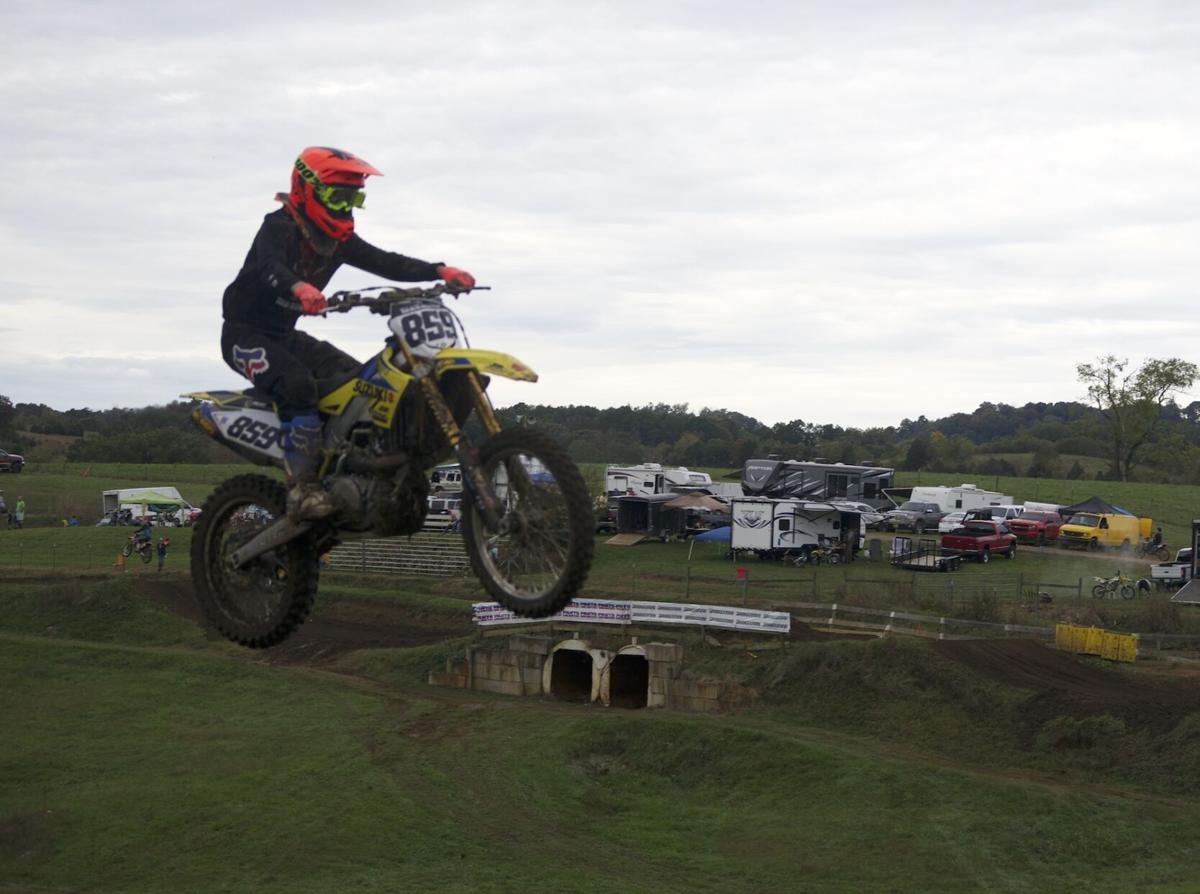 Kyle Bitterman goes to the outside of Jack Chambers to take the lead in the Cody Gragg Memorial Race at the Suzuki Top Gun Showdown at Muddy Creek Raceway.

BLOUNTVILLE — Kyle Bitterman said he can pay the mortgage now.

Bitterman had to beat 36 of the top riders in the nation, including Florida’s Jack Chambers and Michigan’s Marshal Weltin and local stalwarts Adam Britt and Hans Neel to capture the big prize.

There was also the prestige of the 2-stroke race named after Gragg, a pro motocross rider from North Carolina who was killed in a highway accident in 2017.

Bitterman said a good holeshot was key to being in position to battle Chambers for the top spot once early leader Brandon Sharer crashed on the slick track that was saturated with rain throughout the morning.

“I was so nervous because if you don’t get out early, you get left behind,” Bitterman said. “I got off to a good start and I knew a lot of things could happen because the track was super greasy. I held it together and they were making mistakes. Once the leader went down, it was go time.”

It wasn’t over, as Bitterman nearly crashed his Yamaha coming off the track’s largest jump and briefly got off course in the grass.

“I got sideways when I came down, got sideways into the mud and my arms were done,” Bitterman said. “I’m so proud, man. We put this bike together in less than a week and a half. This is awesome.”

It was also awesome for Chambers, who finished second on his KTM and later won the 250 Pro race. Weltin also had a day to remember. He rode a Kawasaki to the third-place finish as well as a win in a 250 moto and second place overall and a third-place run in the 450 Pro race.

Britt briefly got out front on the holeshot, but was clipped by another rider, sending him back in the pack and forcing him to work through the field for the fourth-place finish.

“I had an awesome holeshot, but it’s a little aggravating. It’s tough when you’re working that hard, get in a good position and it gets taken away from you,” Britt said. “There wasn’t much give-and-take, especially with the mud. It made the conditions where it was hard to pass. The mud got everybody and there were a lot of hurt feelings for sure.”

Scharer, a California racer, rode his Yamaha to finishes of fifth and third in the two 450 motos to take the overall title. Neese, a former 450 champion at the Top Gun Showdown, finished second with his finishes of third and fifth.

Kingsport’s Logan McConnell finished second in the first moto and 13th in the second for a sixth-place finish overall. McConnell also won a race for the 20+ division. He talked about doing best when track conditions were at their worst.

“It was all over the place, pure survival that first race. That was fun,” McConnell said. “I just tried to keep the googles clean, stay up and go forward. To race Mike there, he was fast. You don’t think about racing someone like him when you’re out there. He and some of the other pros have been heroes of mine growing up and to compete with him, it’s a pleasure.”

Chambers had finishes of 4-1 on his KTM to win the 250 race with Weltin posting 1-4 finishes.

“It started off a little muddy, but Victory Sports fixed up the track well,” Eads said. “In the morning, it was super sloshy, slick and hard to go through the corners. You just had to stay back, focus and think about what I was doing to go fast.”

Kevin Walker of Kingsport, the winningest rider in track history, won two classes and finished runner-up in another race. Will Andrews of Hampton and Brandon Sorah of Church Hill also netted two wins.

Chris Furches of Jonesborough posted two second-place finishes in ATV Amateur to beat Kevin Kennedy of Blountville and Logan Boomershine of Piney Flats, who won individual motos. Other local winners were Gabby Kindle of Fall Branch in 51cc Beginner and Alex Colley of Norton, Va., in the 85cc 9-11 division.