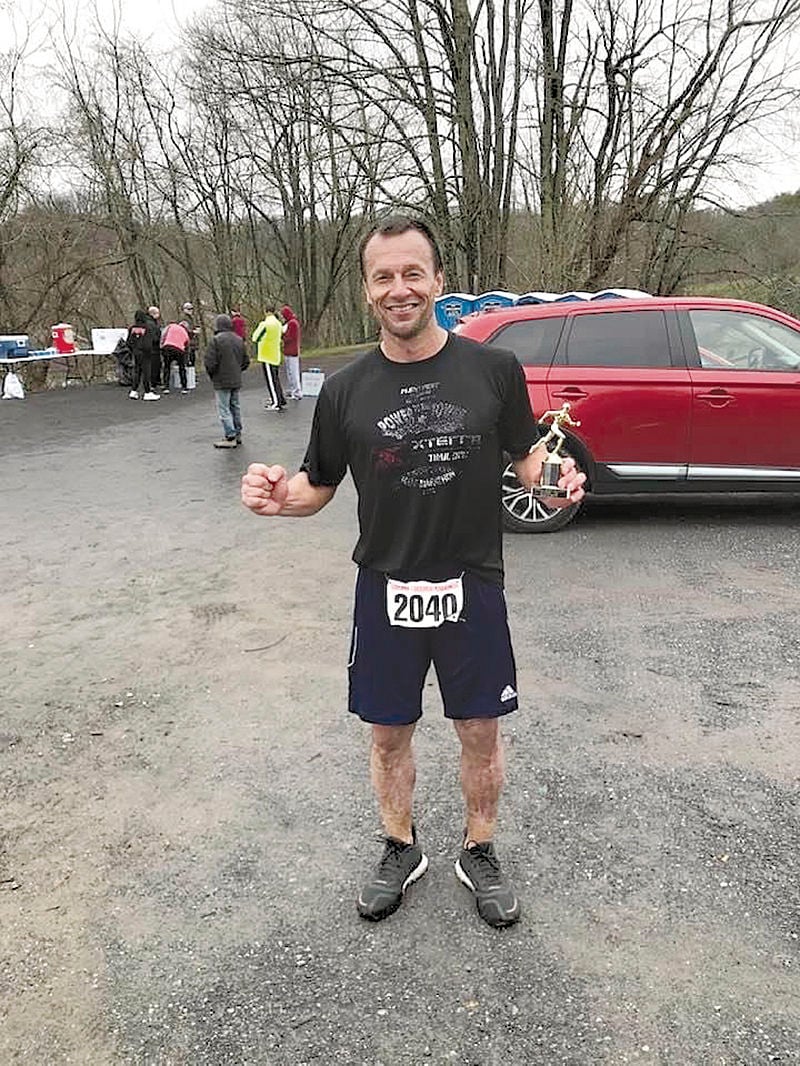 Michael Smelser poses with his trophy that he received for winning his age group at the Virginia Creeper Marathon in March. 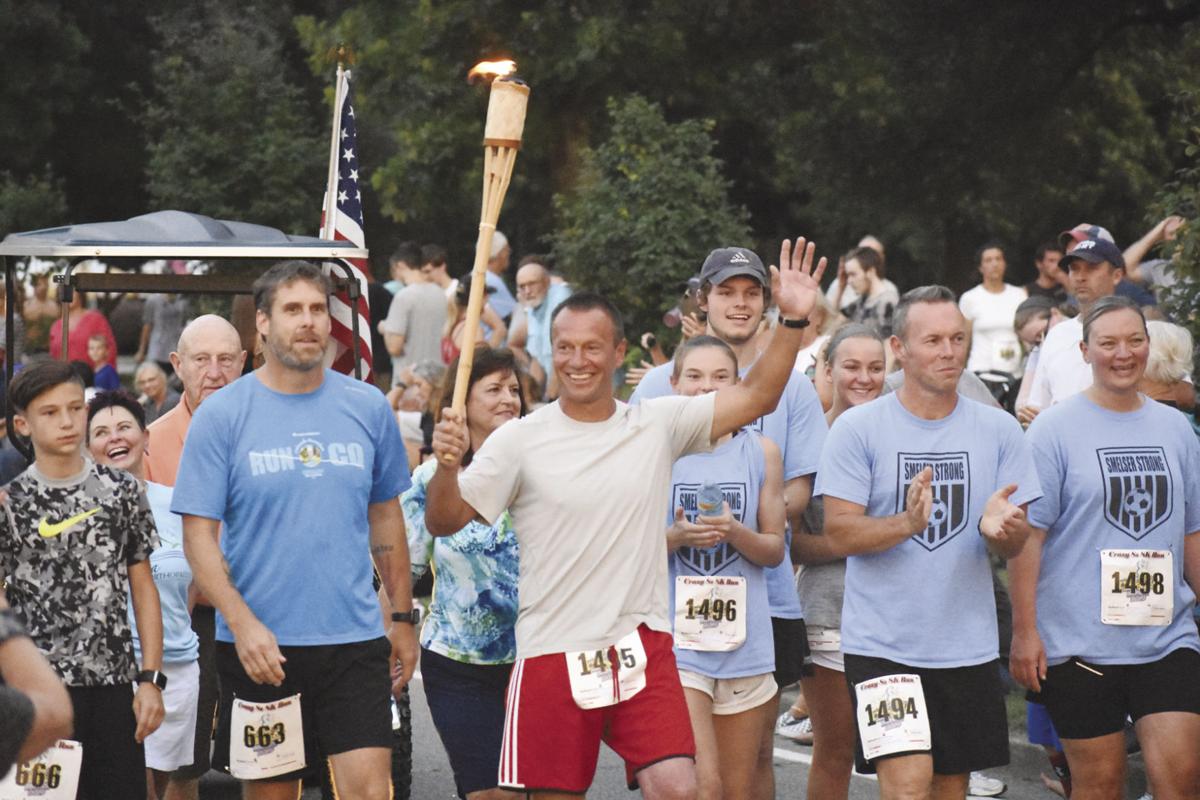 Michael Smelser served as the Crazy 8s torchbearer in 2019. 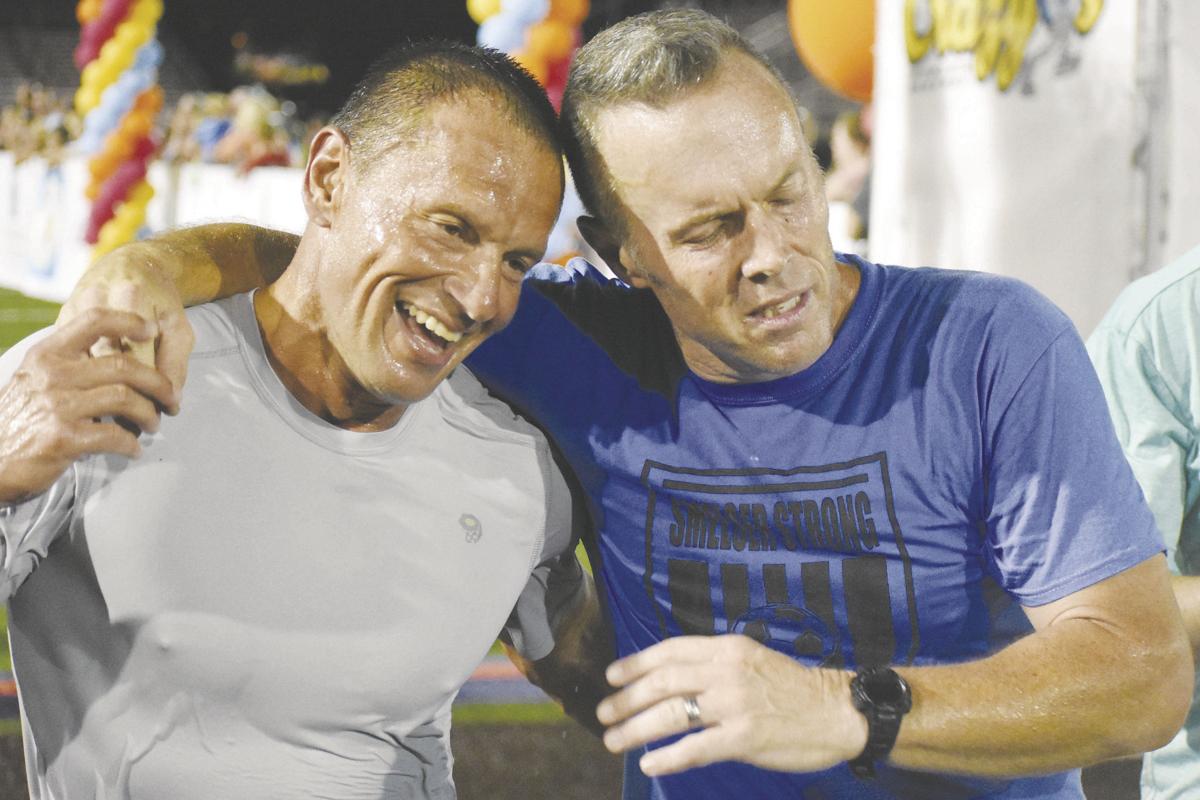 Michael Smelser, left, and his brother Mark share a hug after completing the 2019 Crazy 8s 8K in Kingsport. It was Smelser's first race that he finished after suffering severe burns to the lower half of his body.

Michael Smelser poses with his trophy that he received for winning his age group at the Virginia Creeper Marathon in March.

Michael Smelser served as the Crazy 8s torchbearer in 2019.

Michael Smelser, left, and his brother Mark share a hug after completing the 2019 Crazy 8s 8K in Kingsport. It was Smelser's first race that he finished after suffering severe burns to the lower half of his body.

It didn’t take long for Michael Smelser to get back running again in 2019 after suffering severe burns on the lower half of his body, especially in his legs.

It took only four months for him to get back racing as he competed at the Crazy 8s 8K last July in Kingsport. He also was the torchbearer for the race, which was a major milestone for him being from Kingsport and having run every Crazy 8s since its inception.

“First of all, when Hank (Brown) and Natalie (Whitlock) asked me to be the torchbearer last year, I was completely humbled,” Smelser said. “It was just coincidental that I had run every single one of them and when I told them I was going to run it, they were shocked.

“When I started back to recovery, I really didn’t know if I was going to get to walk again. I started thinking a lot about my family and a lot about my faith when I spent that month down in Georgia. ... I did have to stop a few times and my brother was running with me, so that made it a little bit easier. My main goal was to finish and that’s what I did.”

In March, Smelser took another major step in completing the Virginia Creeper Marathon in 3 hours, 19 minutes and 57 seconds. He finished in fourth place and won his age group. His time also qualified him for his age group in the Boston Marathon by three seconds.

“March 13th is a day I’ll never forget because that’s when the accident happened,” he said. “It was getting close to the one-year anniversary and I started thinking about what I could do and I thought about running a marathon. I had done the Virginia Creeper Marathon a few times before and the logical thinking was that it was $15 entry fee, the race is limited to 100 participants and there are plenty of places along the course where I could drop out and not have to walk 10 miles back to the car.

“I really had just one goal and that was to finish. I never really thought about a Boston qualifying time or anything like that.”

Smelser, who has one overall win (at VCM in 2014) and one other top-five finish, remarked that the training for the marathon this time around was different. However, this year’s race took on added meaning as it occurred just two days after the first anniversary of his accident.

“When people asked me about what my training strategy was trying to come back, I just told them it was one foot in front of the other foot,” he said. “I started out doing laps around the track at Science Hill on crutches, then walking and then running. Before the marathon, I had gotten up to maybe an hour or 90 minutes at the most. It’s a good thing I was out there by myself most of the time enjoying nature on the Creeper Trail. There’s a lot of things that go through your head running 26 miles and I even thought ‘Why am I doing this?’

“Then that little voice came to me and told me not to quit. I thought a lot about my family and what’s been going on in the past year with the crazy amount of support I had. I got and still get letters and messages from people around the country that I don’t even know telling me about how my story inspired them. It’s been unbelievable.”

He, like most everyone else, is staying at home these days. He has two boys heavily involved in sports. His oldest son is now finished with his eighth-grade year and had his baseball season canceled.

“My oldest played three baseball games this season and that was it,” he said. “He and my younger son play a lot of travel ball, too, and who knows when and if that will get back underway. I don’t know if parents will want to take their kids across state borders without safety measures and have them play in tournaments.”

Smelser has long been an advocate for soccer in Northeast Tennessee and has coached at local high schools like Science Hill, David Crockett and Dobyns-Bennett. He says he feels horrible for the seniors that did not get to complete the soccer season.

“I honestly cannot imagine what the seniors are going through right now having their last season taken away,” he said. “I remember my senior year when I played for Dobyns-Bennett and those were some of the best environments that I ever played in. It’s hard to duplicate that because your senior year is supposed to be the time when you get to lead others and have a lot of fun.

“For some of those seniors, they’ll never get to put on another jersey, run another lap or hit another tennis ball for their team again. I played college soccer and those were some fun times, but your senior year of high school is supposed to be one of the most memorable years you’ll ever have. I hate it for them and I hope that something good comes out of this for them.”