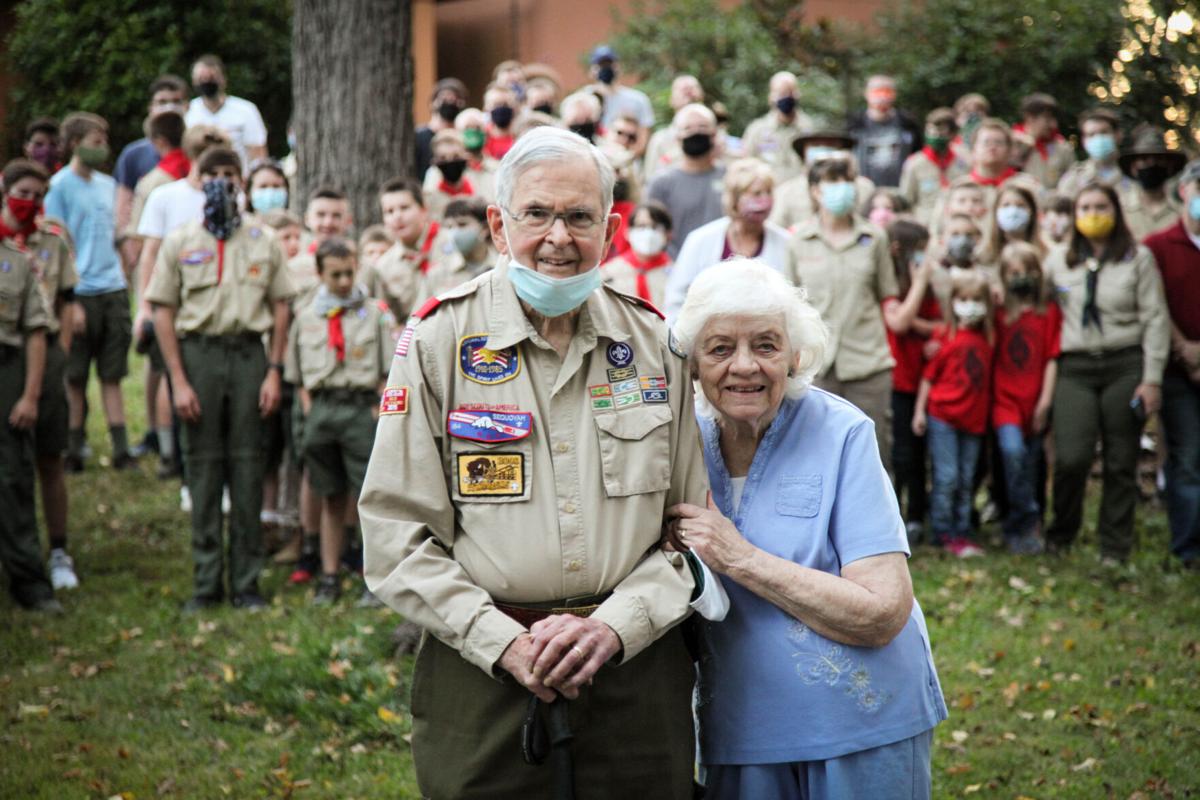 Charles and Clara Hasbrouck stand with Scouts, leaders and past Eagle Scouts. Over 100 people surrounded their home in a surprise ceremony to honor their dedication to scouting. 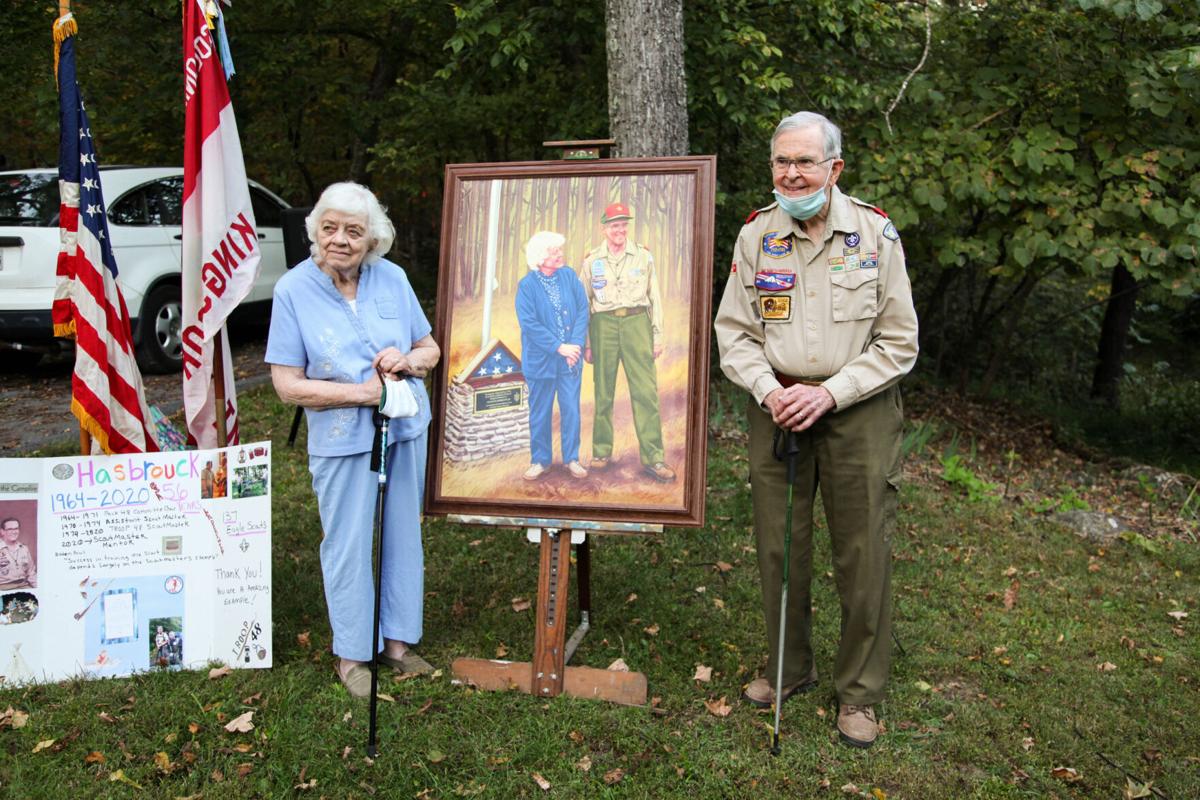 Among the gifts from the troop was a portrait of the Hasbroucks painted by ETSU Digital Media alumna Chelsea Lowe. 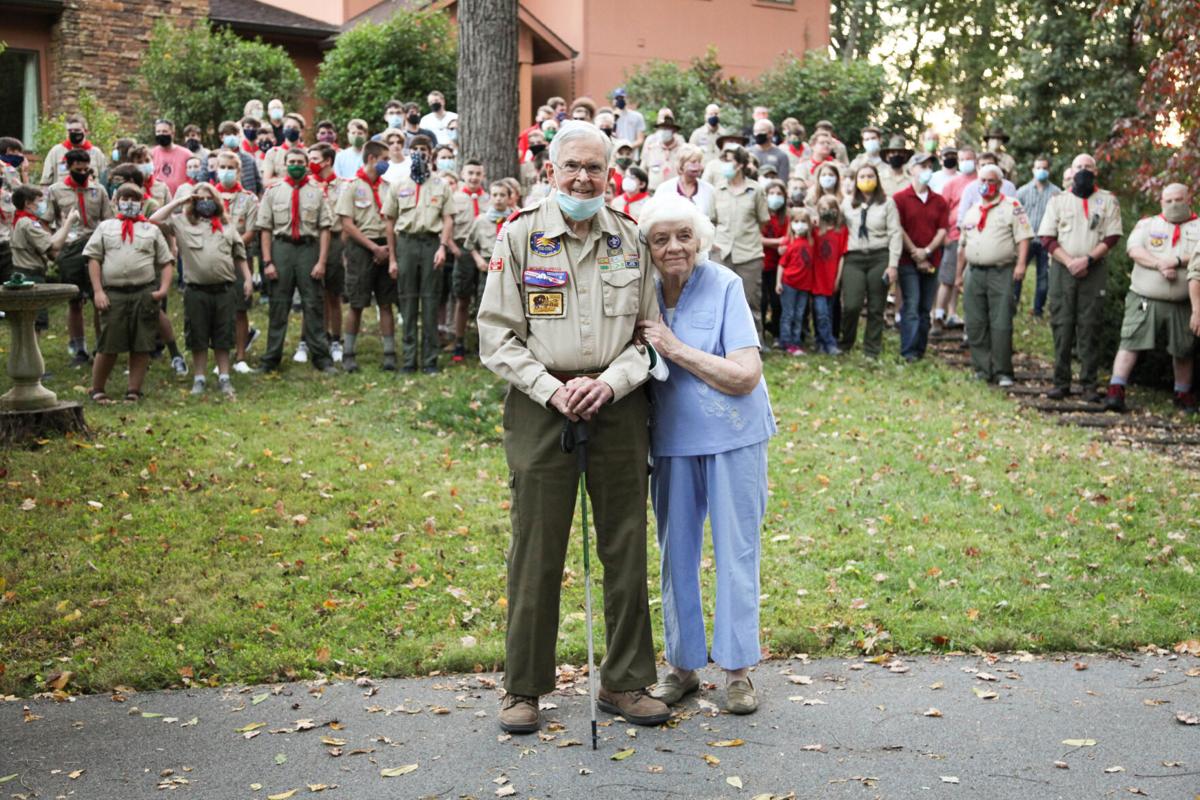 Charles and Clara Hasbrouck stand with scouts, leaders and past Eagle Scouts. Over 100 people surrounded their home in a surprise ceremony to honor their dedication to Scouting. 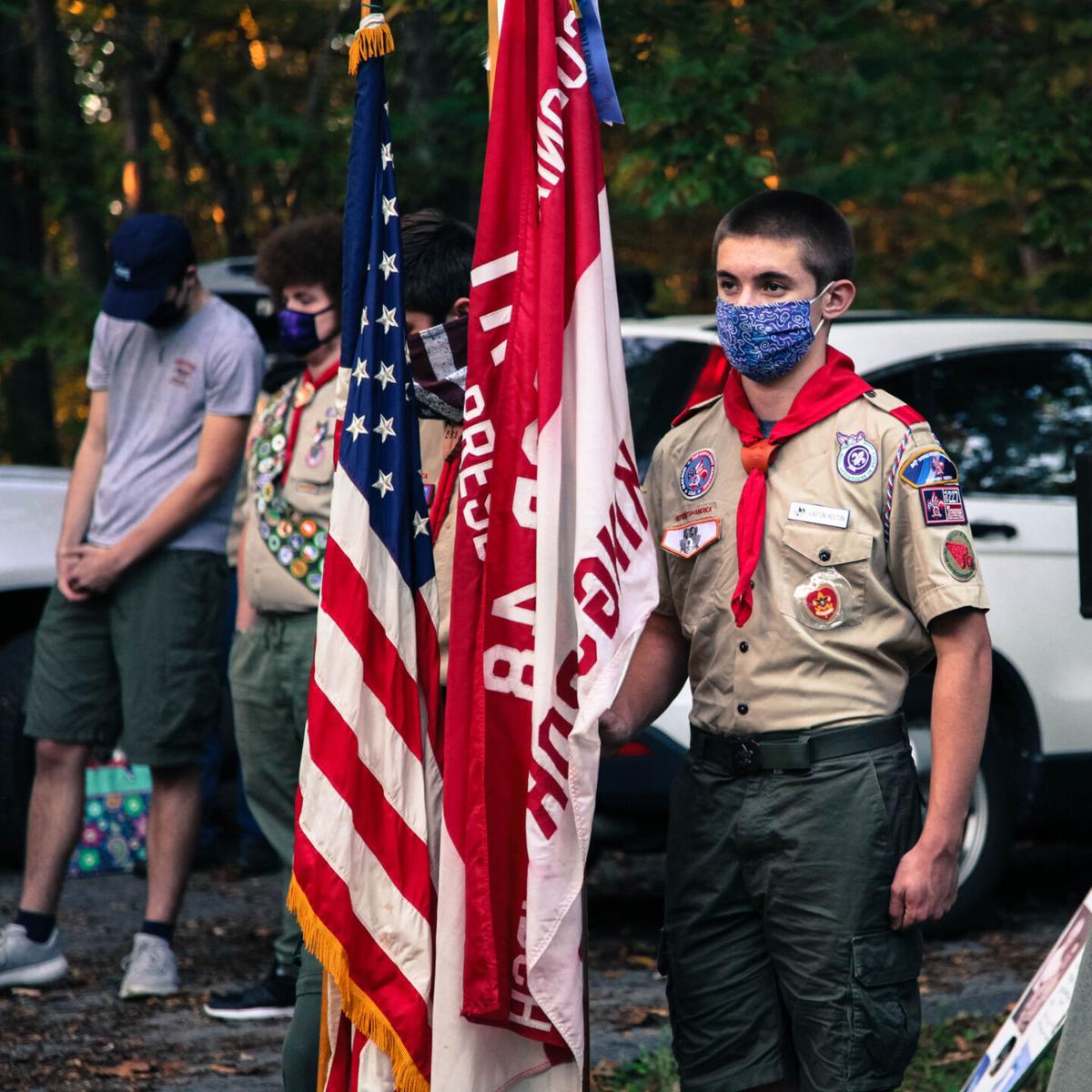 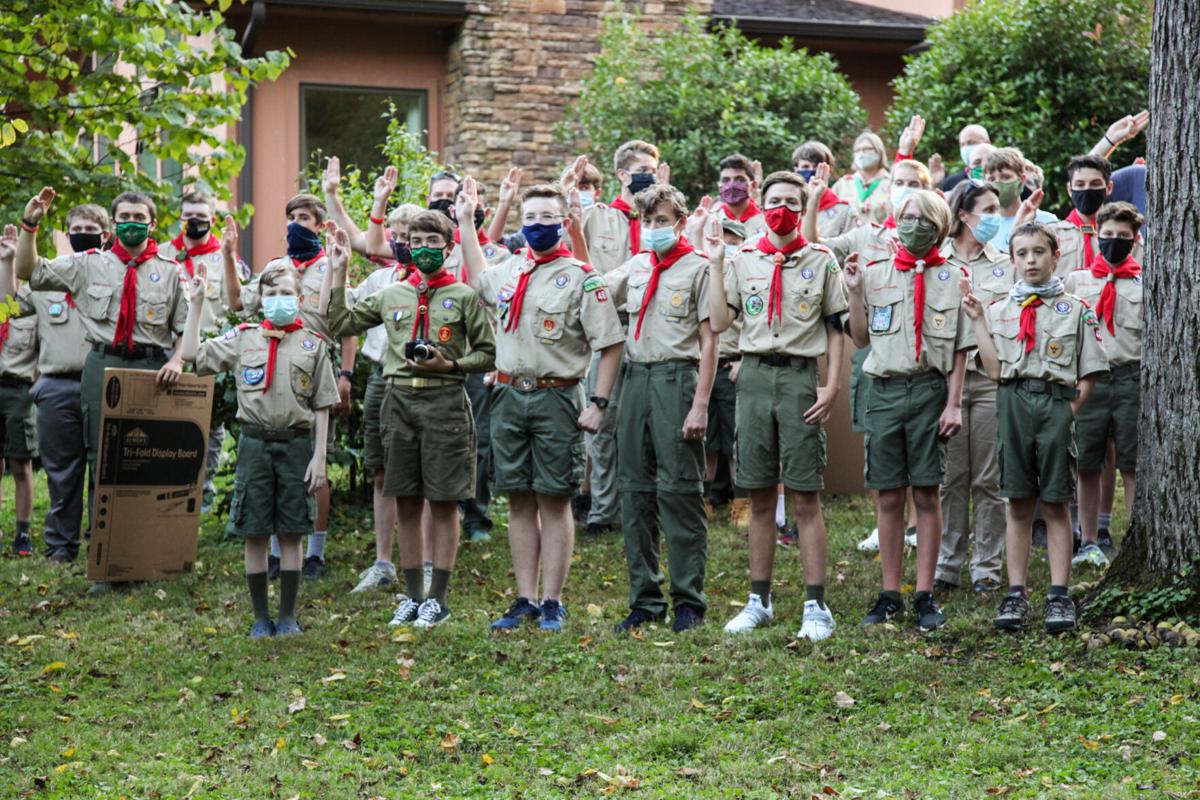 Charles and Clara Hasbrouck stand with Scouts, leaders and past Eagle Scouts. Over 100 people surrounded their home in a surprise ceremony to honor their dedication to scouting.

Among the gifts from the troop was a portrait of the Hasbroucks painted by ETSU Digital Media alumna Chelsea Lowe.

Charles and Clara Hasbrouck stand with scouts, leaders and past Eagle Scouts. Over 100 people surrounded their home in a surprise ceremony to honor their dedication to Scouting.

KINGSPORT — For more than 50 years, Colonial Heights resident Charles Hasbrouck has made scouting a top priority in his life.

With a strong love of the outdoors and a desire to mentor young boys and teens in the ways of scouting, it’s really no surprise that Hasbrouck has stuck with Scouts for as long as he has.

“I’ve always thought scouting was great. I love to do outdoor stuff, go camping. My wife and I have three boys, and we enjoy doing things with them, go camping all over the U.S. and Canada, ” Hasbrouck said. “Camping, traveling and sight-seeing is just second nature to my family.”

THE LOVE OF SCOUTING

Hasbrouck, who will be 88 in December, grew up in eastern North Carolina and attended North Carolina State University, where he earned a degree in mechanical engineering. Eastman recruited Hasbrouck to Kingsport, and he worked for the company for 46 years before retiring.

When Hasbrouck was 12 years old, living in North Carolina, he became a Boy Scout. However, the local Presbyterian minister who was the scoutmaster moved away to Tennessee, which left the football coach in charge. When basketball season fired up, Hasbrouck said the coach just couldn’t handle both duties and the group — Troop 72 at the time — just went away.

Years later while living in Nebraska, Hasbrouck met his future wife, Clara, and it was through her, he said, the connection to scouting returned.

“When I met her in Lincoln, she was a field director and troop leader for the Girl Scouts,” Hasbrouck said. “Then when we came to Kingsport, she got involved in Girl Scouting. Naturally, our three boys became Cub Scouts, then Boy Scouts and finally Eagle Scouts. It all kind of fit together well.”

Troop 48 is the oldest troop in our district, the biggest troop in the council and since forming in 1946, it has seen 159 young men achieve the rank of Eagle Scout.

During his decades of service with Troop 48, Hasbrouck has mentored 137 of those Eagle Scouts.

He said he never felt like scouting was a chore.

“Because I participated ... my wife used to laugh and say Troop 48 was organized for the adult leaders because they had so much fun,” he said.

Some scouts did not have the means to pay for certain events, so Hasbrouck set up a work/study program on his property that allowed for young people to learn maintenance and conservation skills while making a wage to pay for trips. Hundreds of Scouts earned whatever was needed for events by clearing brush or installing erosion control at the Hasbroucks’ homestead.

In recognition of his decades of service to the scouts, Colonial Heights Presbyterian Church (the sponsor of Troop 48) and his fellow Scout leaders recently paid tribute to Hasbrouck and Clara. The couple received gifts and cards, including a handcrafted scouting quilt and a hand-painted portrait.

Even though his title has changed with Troop 48 and he’s semi-retired from scouting, Hasbrouck said he still likes the idea of working with the older Scouts and coaching them toward their ultimate goal — becoming an Eagle Scout.

“I’m honored and humbled. It’s been wonderful and very beneficial to me and the thousands of boys who have come through there over the decades,” Hasbrouck said. “I always tell people it’s really wonderful getting to know these outstanding families in the community because for the most part the boys are high achievers, and if the parents get involved they share their skills with the troop also.”