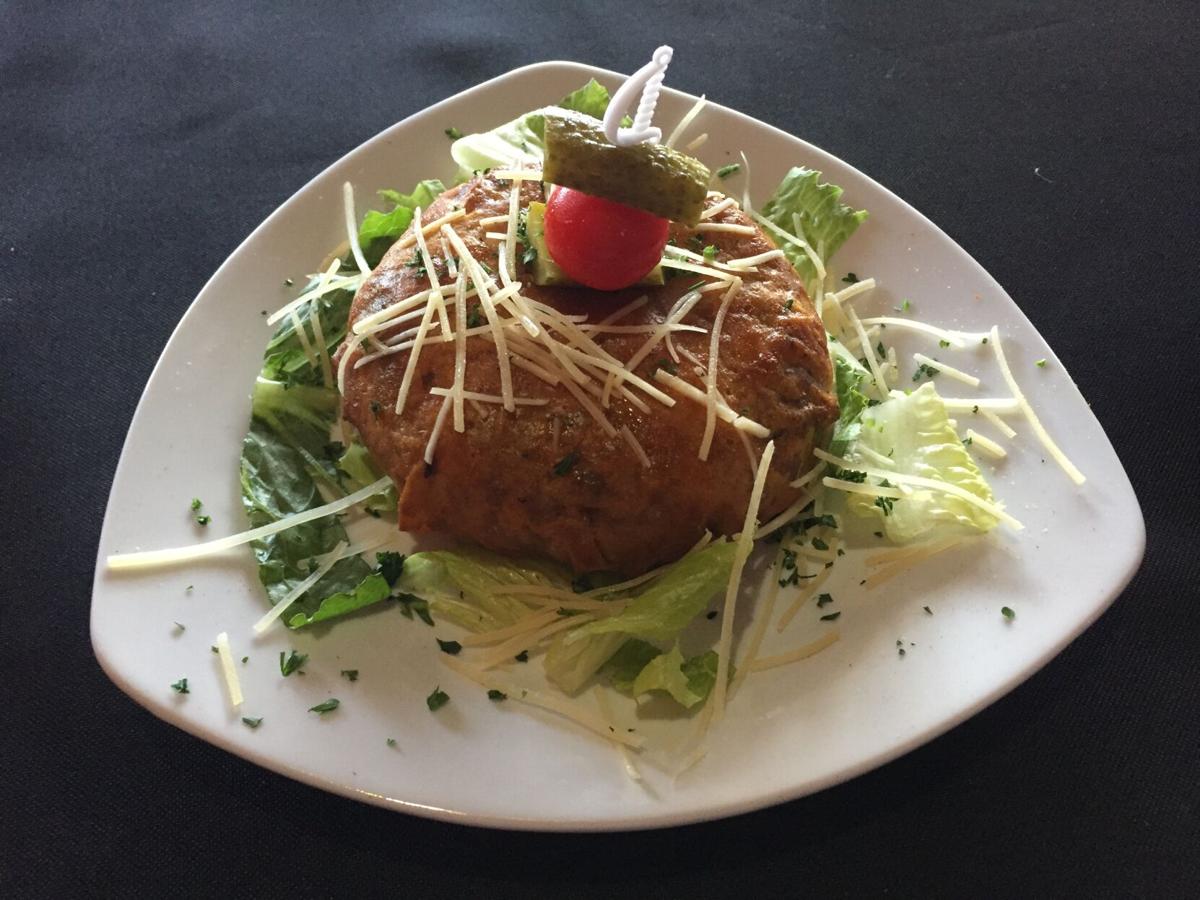 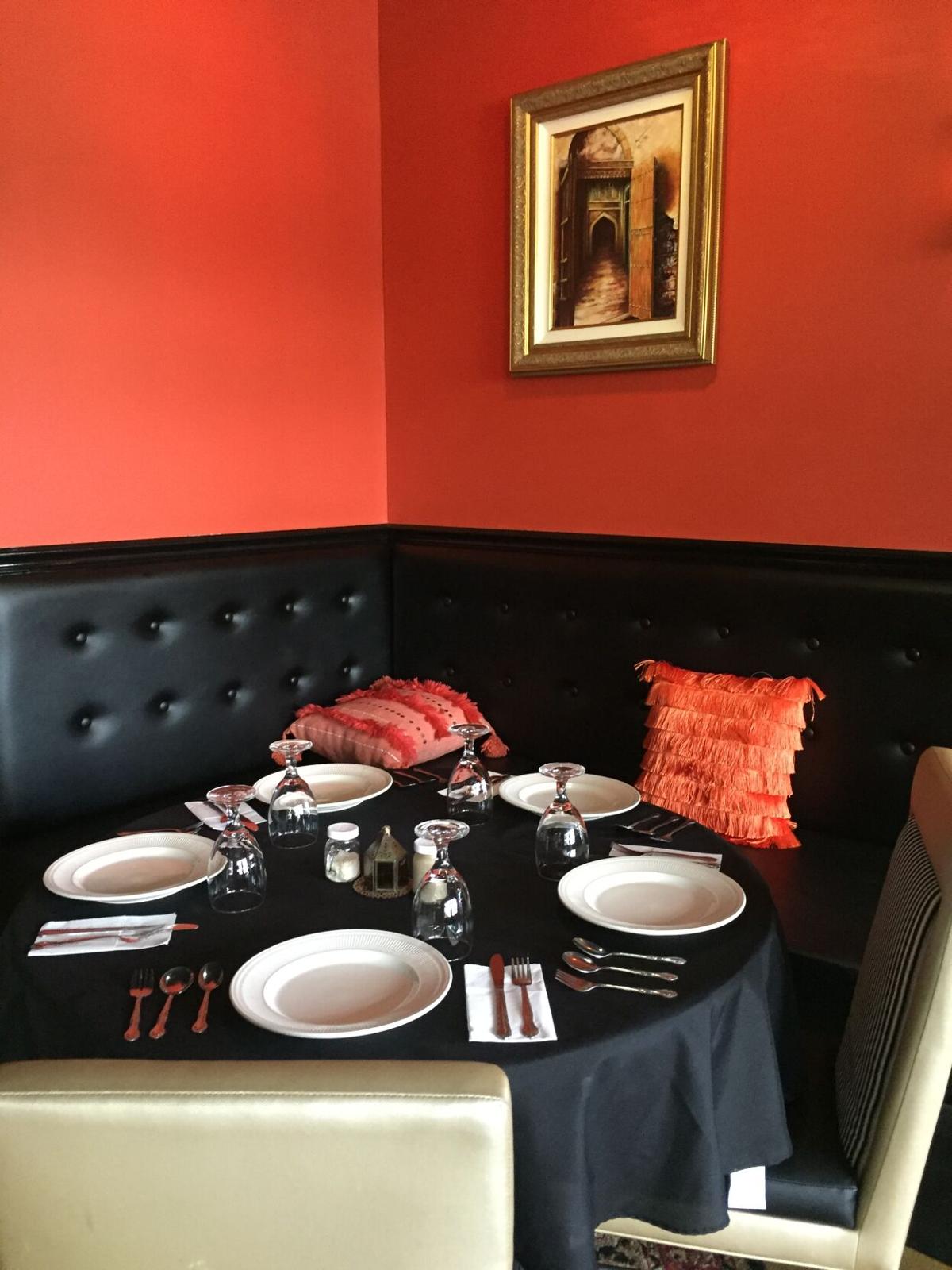 Moroccan delicacies await diners who venture out to Casa Nostra. 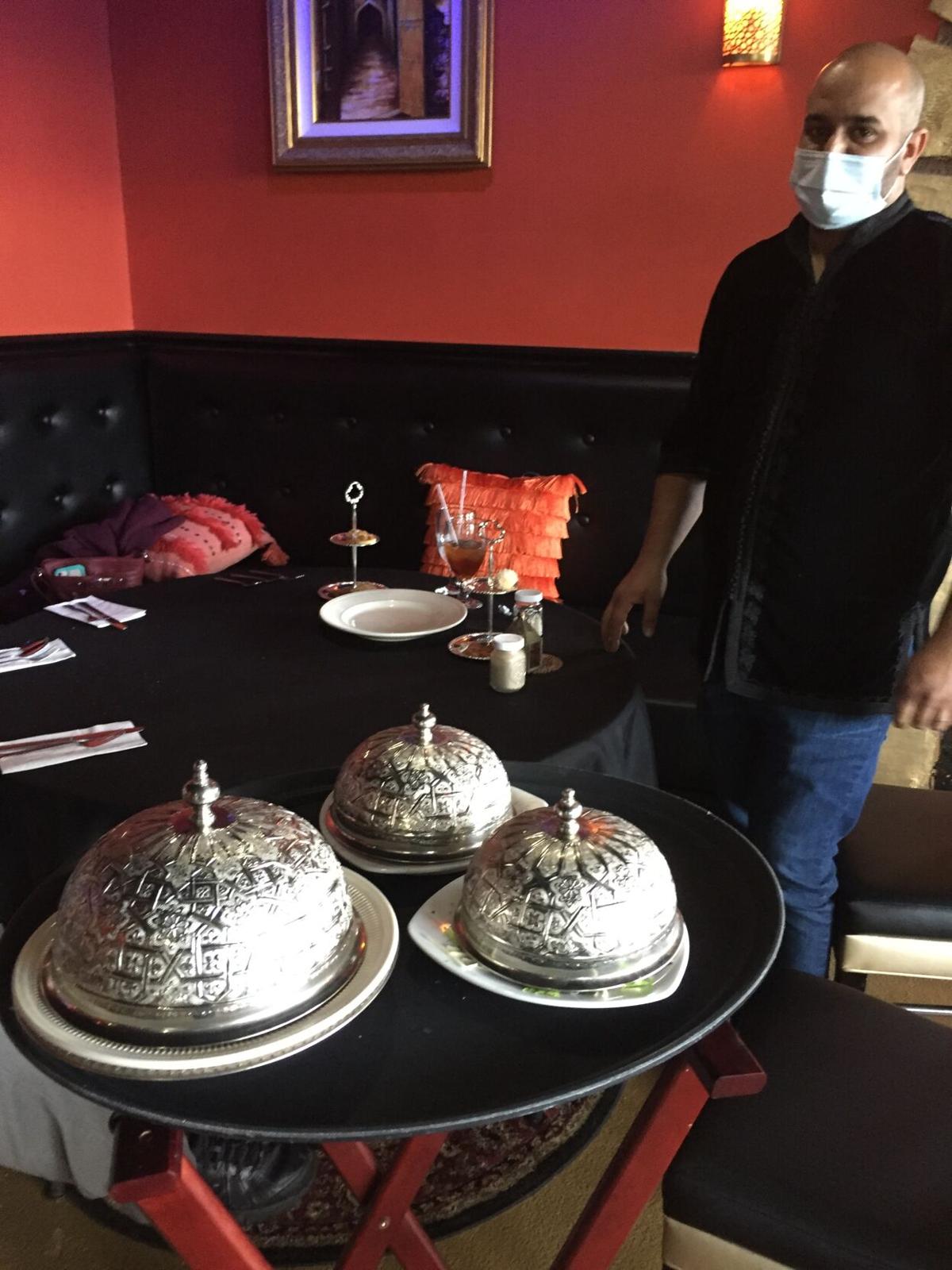 Casa Nostra Mediterranean Cuisine & Bakery can be found at Suite 101 at 405 Roy Martin Road in Gray. 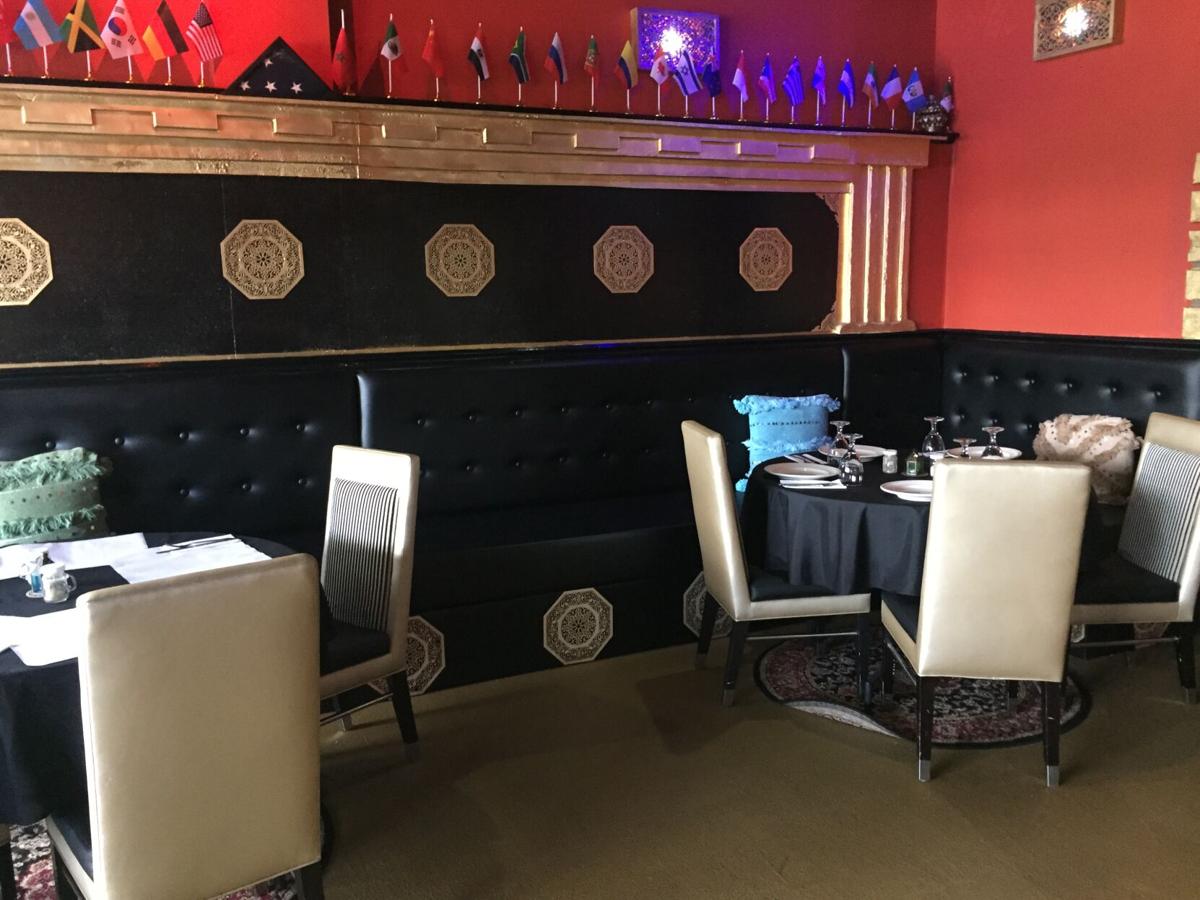 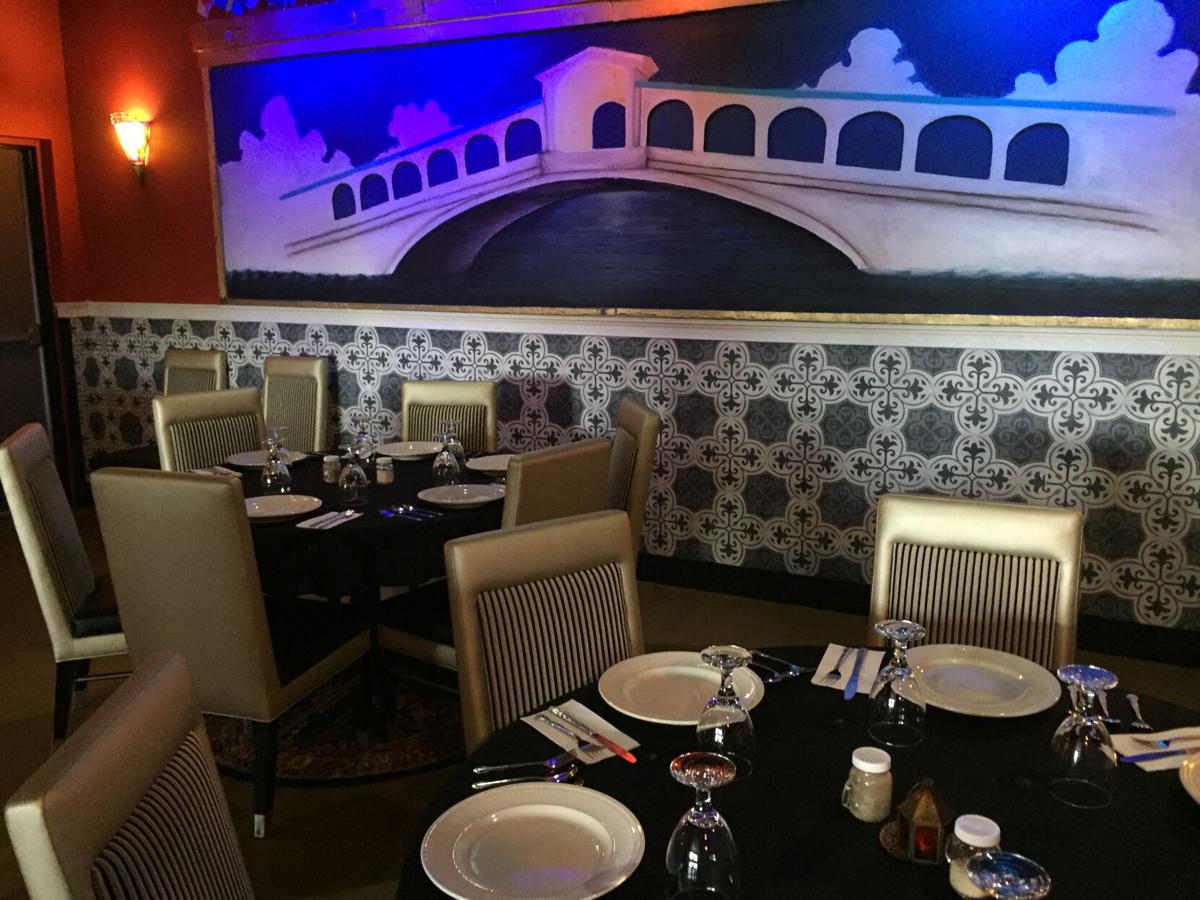 Here are three dishes found at Casa Nostra, which is operated by Driss Yousfi and his wife, Nadia, along with their friend Abdul Elmoumni. 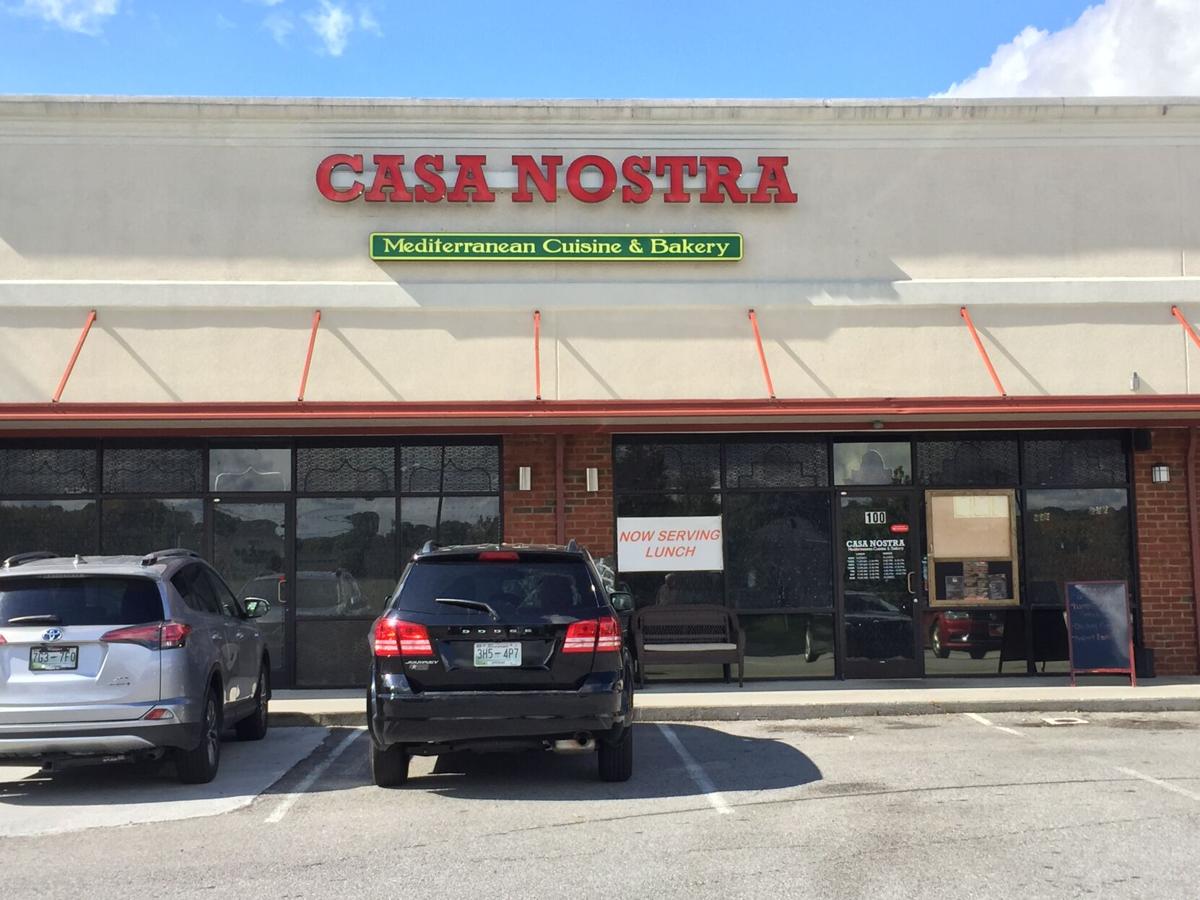 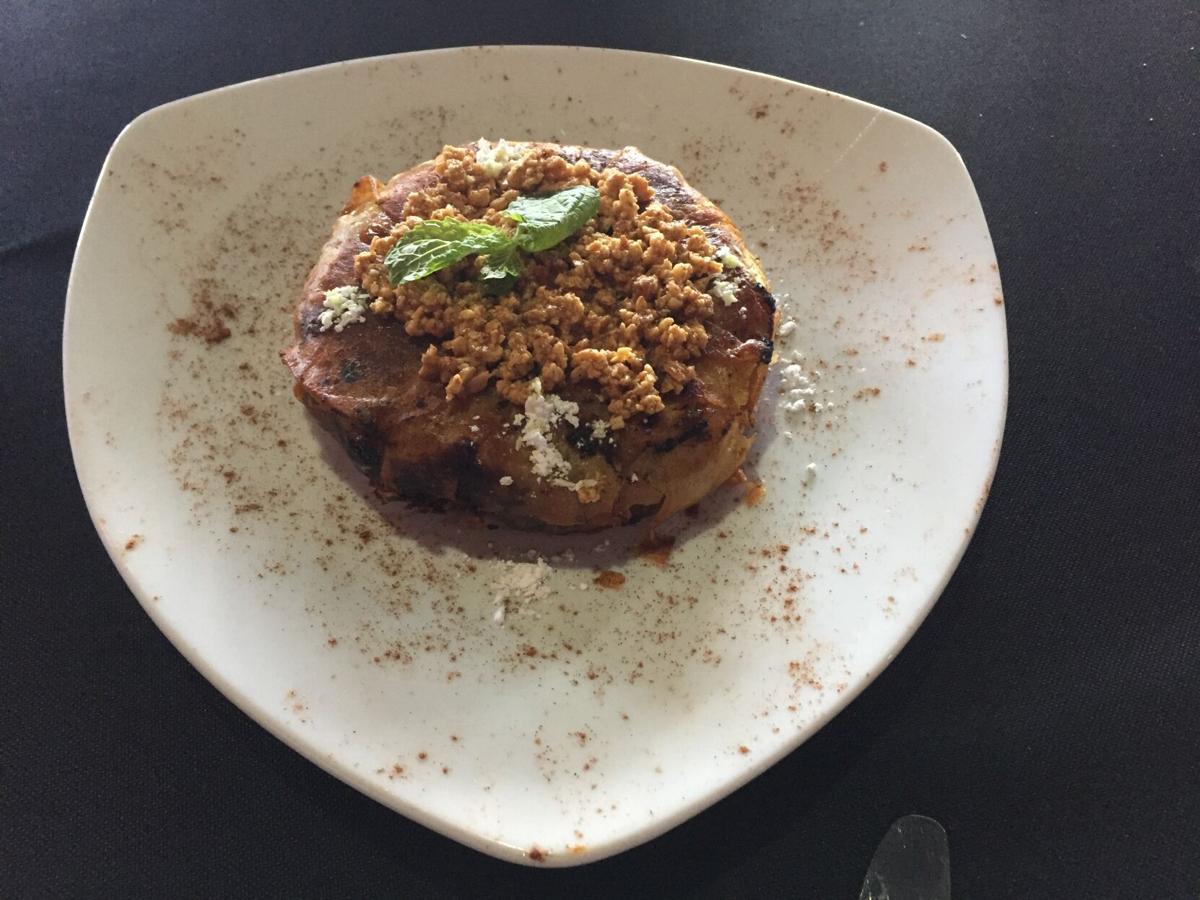 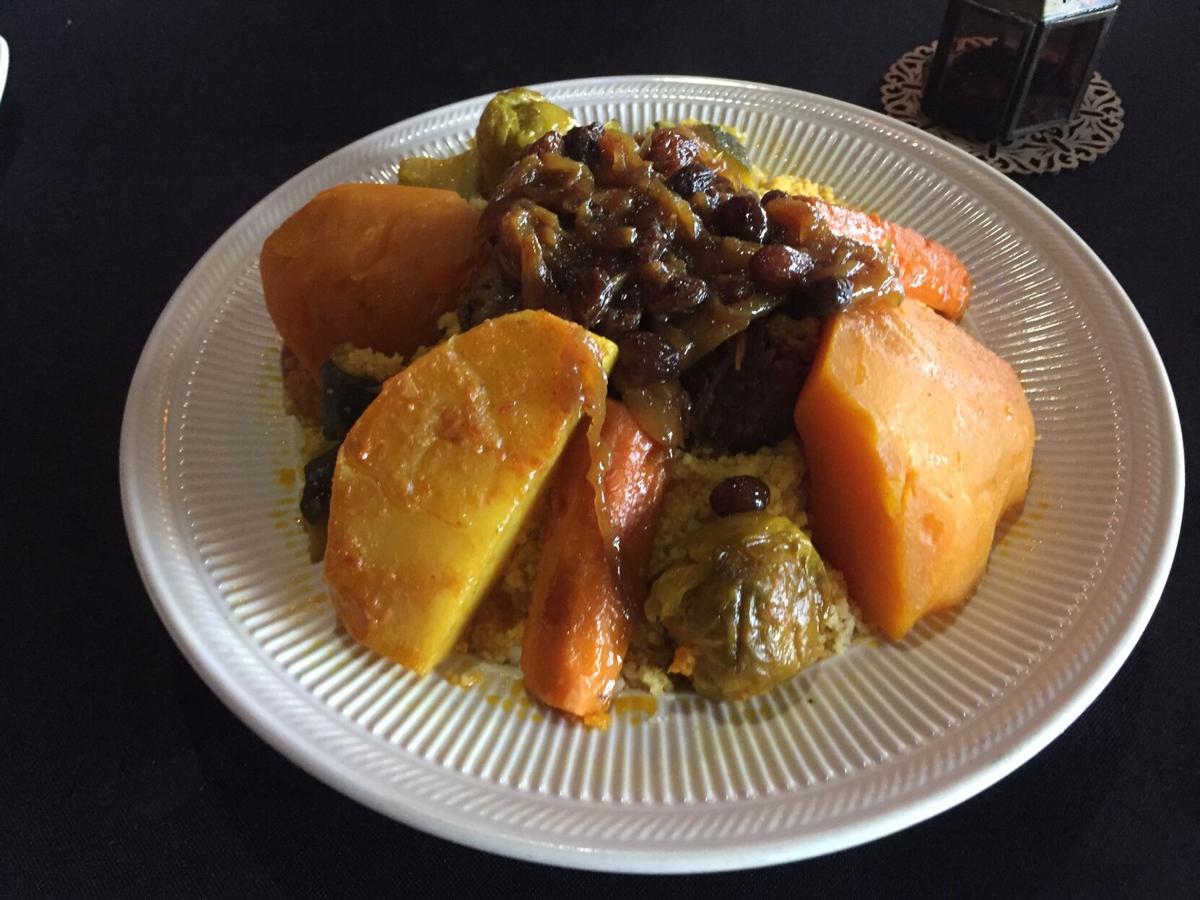 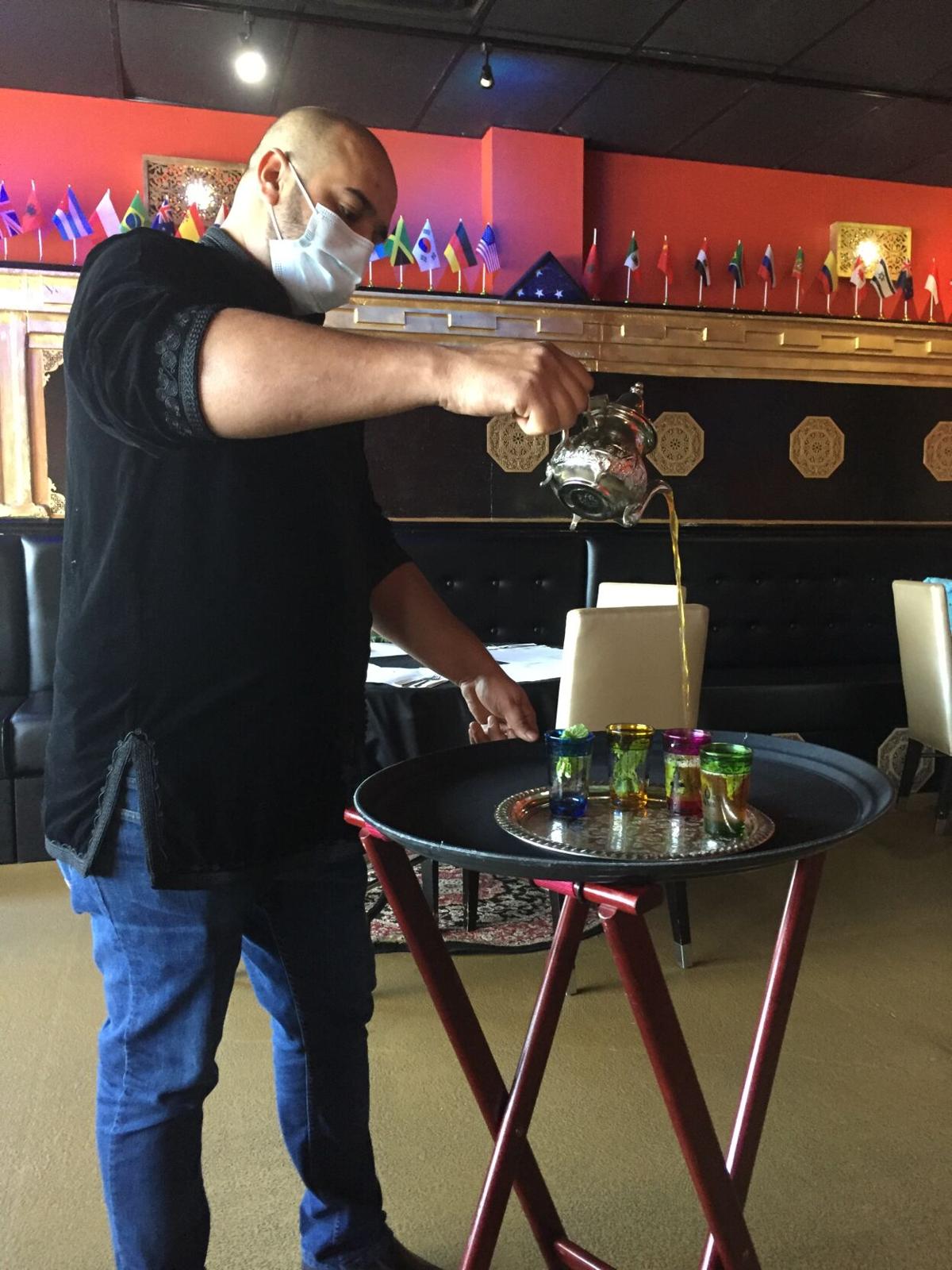 Moroccan delicacies await diners who venture out to Casa Nostra.

Casa Nostra Mediterranean Cuisine & Bakery can be found at Suite 101 at 405 Roy Martin Road in Gray.

Here are three dishes found at Casa Nostra, which is operated by Driss Yousfi and his wife, Nadia, along with their friend Abdul Elmoumni.

This year’s holiday season appears to be anything but joyous. These “interesting times” are one big wet blanket laid on everybody’s daily life. However, there are those who find a way to not only survive in the era of COVID-19, but thrive, and I’ve met three residents of East Tennessee who are doing just that.

Meet Driss Yousfi. Originally from Morocco, Yousfi immigrated to the United States in 2004, settling in Kingsport and resigning himself to never again seeing another Moroccan.

In 2007, Yousfi and his cousin Moe started Primo’s restaurant, first in Elizabethton and a second restaurant later in Unicoi.

At about the same time, Abdul Elmoumni arrived in New York City, and began working at several restaurants there. In 2008, Elmoumni moved to Tennessee, taking a position at Gino’s Restaurant in Gray, where he and Yousfi met and became friends in 2009. Elmoumni left Gino’s in 2009 to serve as manager for both Primo’s restaurant locations, each restaurant’s success in large part due to the hard work Yousfi and Elmoumni put into making them so.

Three successful years later, Yousfi sold his interest in Primo’s and, with his new friend Elmoumni, planned their next venture. 2014 saw Yousfi become a citizen of the United States, receiving as a gift his much-prized American flag that had flown over the Capitol in Washington, D.C.

In 2016, Yousfi and Elmoumni together opened Casa Nostra Italian Cuisine in Greeneville. “Casa Nostra” means “Our Home,” as in “You are welcome in Our Home.”

Meet Yousfi’s wife, Nadia. As the youngest child in her family, Nadia learned all about cooking, especially preparing large portions to feed lots of family members. In addition to her mastery of Moroccan and Middle Eastern cuisine, Nadia is skilled in Chinese, Asian and Russian cuisine.

Being married to a restaurateur with an “11-to-11” work schedule, Nadia made sure there was a traditional Moroccan home-cooked meal waiting for him when he arrived home.

Nadia’s home cooking has attracted a growing word-of-mouth reputation from those whom she had fed, telling their friends about the experience. Nadia’s popularity grew to the point where Yousfi advised her to set up a Facebook page. Next was “Nadia’s Table,” a YouTube channel where her fans stay in touch and learn (in Arabic) how to make her recipes at home.

“Though we are Tennesseans,” Yousfi says with pride, “we keep the tradition and culture of Morocco alive within us.”

Their dream of Casa Nostra Mediterranean Cuisine & Bakery became a reality in the very place where their journey began: the Gray storefront formerly occupied by Gino’s Restaurant.

To begin with, Yousfi brought New York City interior designer Abdul Rahim Albane to Gray. Taking two weeks, Albane gave Casa Nostra’s interior the proper Moroccan look and atmosphere. Construction of the restaurant’s interior began in November 2019, the work being overseen (and in some cases, hand-built) by Yousfi’s partner, the versatile Abdul Elmoumni. Work on the restaurant was completed early in March 2020.

Casa Nostra’s grand opening was scheduled for March 15, 2020, but was forestalled by the COVID-19 coronavirus outbreak. The restaurant, completed but idle, finally had its grand opening on June 15, 2020.

Since Casa Nostra opened after the COVID-19 outbreak, the restaurant received no small business recovery stimulus support from the federal government.

Entering Casa Nostra, you find the restaurant resembles a family’s home that you’d find in Morocco. Rich colors and fine fabrics surround you, directing attention to your table, and the invitation to partake of the “family’s” hospitality the minute you take your seat.

“Hospitality is everything,” Nadia said, “we want you to see Casa Nostra as the place where it is a party every day. All of us, Driss, Abdul and I frequently come out from the kitchen and check on our customers. Everything done in my kitchen at home, I do in the kitchen here at Casa Nostra. I handle the recipes and the food. Driss and Abdul assist me, and also see to the wait staff and the customers.”

In Morocco, inviting someone into your home as a guest is a special occasion. The guest is a very important person to you and your family. Mealtime becomes a stage. Each family member has their role in the pageantry performed in their home for the guest’s enjoyment.

At Casa Nostra, hospitality reaches its apex in the restaurant’s special VIP Meal.

A VIP Meal is five courses: appetizer, followed by a main course; your choice of chicken, beef, lamb or seafood with accompanying side dishes. Next are the all-important tea and cookies. Lastly, your VIP meal climaxes with one of Nadia’s spectacular desserts. Cost per person is $60 for a meal lasting two hours or more.

Not surprisingly, interest in Casa Nostra’s VIP Meal has skyrocketed. Nadia’s unique menu choices attract both local diners and those from out of state. So far, Casa Nostra has received out-of-state reservations from customers residing in Delaware, Georgia, New York, North Carolina, Texas and Virginia. They then either drive or fly into the Tri-Cities, often staying the night or the weekend at a local hotel, all for the experience of sampling the Casa Nostra family’s hospitality and dining on one of Nadia’s VIP meals.

This year, to honor the Thanksgiving holiday, Driss, Nadia and Abdul planned their own special version of Thanksgiving dinner, done “VIP style.”

My question, “Where do you see Casa Nostra in the next two years?” got the following response from Yousfi:

“I see our ‘family’ becoming a lot bigger,” he replied. “The support, love and kindness we receive from our customers guarantee this.”

To grow their business, the need to innovate and improve becomes a necessity.

Yousfi, Nadia and Elmoumni are improving the Casa Nostra kitchen’s ability to better accommodate off-menu and special-order entrees, side items and desserts. In this way, formerly off-menu items such as chicken bastilla, (skillet chicken pie), find their way onto the regular menu.

Casa Nostra is also developing a daily-changing lunch special with drink, priced at a flat $10, their take on the American classic “Blue Plate Special.”

Diners at Casa Nostra will find that “being part of their family” means just that.

“If you are dissatisfied with your meal,” Abdul Elmoumni said, “you can send it back and we will bring you something else to eat, or refund your purchase.”

So far, Casa Nostra has issued no refunds.

Recently, my dining partner and I visited Casa Nostra on a Friday, and were served the daily special: beef couscous. In Morocco, having couscous on Friday has the same family meaning as we Tennesseans enjoying fried chicken for Sunday dinner. Our beef version began with a bed of couscous on which was layered boiled, coarsely-chopped carrots, zucchini, pumpkin, turnip, sweet potato and Brussels sprouts. These are topped with a slow-cooked roast beef garnished with raisins and caramelized onions. At table, the couscous platter is served family-style (how else?) with glasses of hot, sweetened tea as an accompaniment.

As my dining partner and I shared our main course, Nadia brought a chicken bastilla and her new “burger” bastilla to our table for us to enjoy.

Chicken bastilla is made with shredded chicken meat with onions, dried fruit (traditionally prunes) eggs and an amazing number of spices, all mixed together, tucked inside several layers of phyllo pastry and grilled in a skillet. It is finished by topping with confectioner’s sugar, chopped pistachio nuts and served.

Nadia’s burger bastilla uses ground beef mixed with garlic and special spice mixture as the filling, then layered between sheets of phyllo dough and grilled.

Our supper of beef couscous and two different kinds of bastilla was positively scrumptious, with exemplary service provided family-style by Driss and Nadia Yousfi and also Abdul Elmoumni, the three members of our new “family.” Each was making sure our time at Casa Nostra would be memorable and delicious.

As we lingered over some of Nadia’s exquisite, jewel-like cookies and more of Abdul’s delicious Moroccan tea, I asked Driss Yousfi how he was doing, in spite of what the “Interesting Times” had thrown in his way.

He considered for a moment, and then smiled.

“I’ve got my family, my business and my tea. I am happy.”