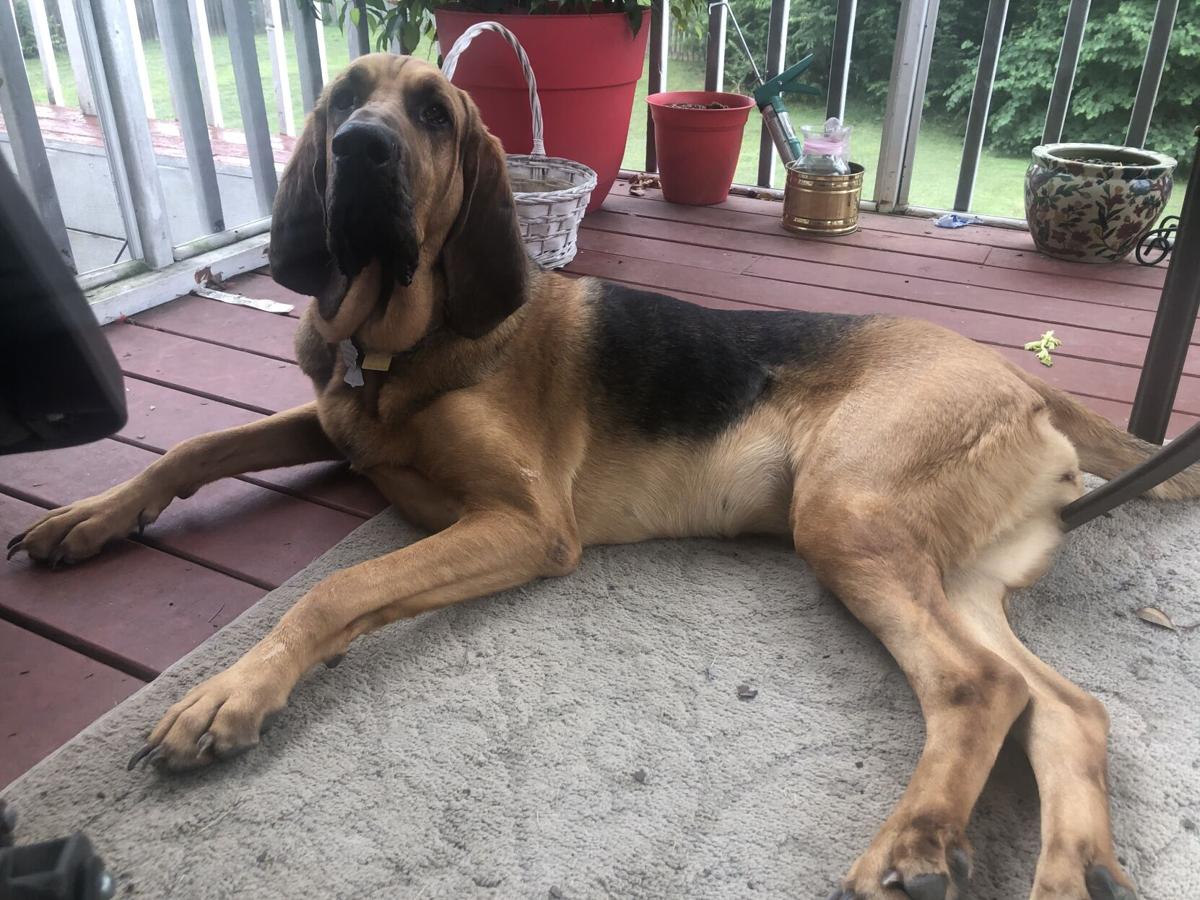 Daisy Duke gets lazy on the back porch when the temperatures soar. 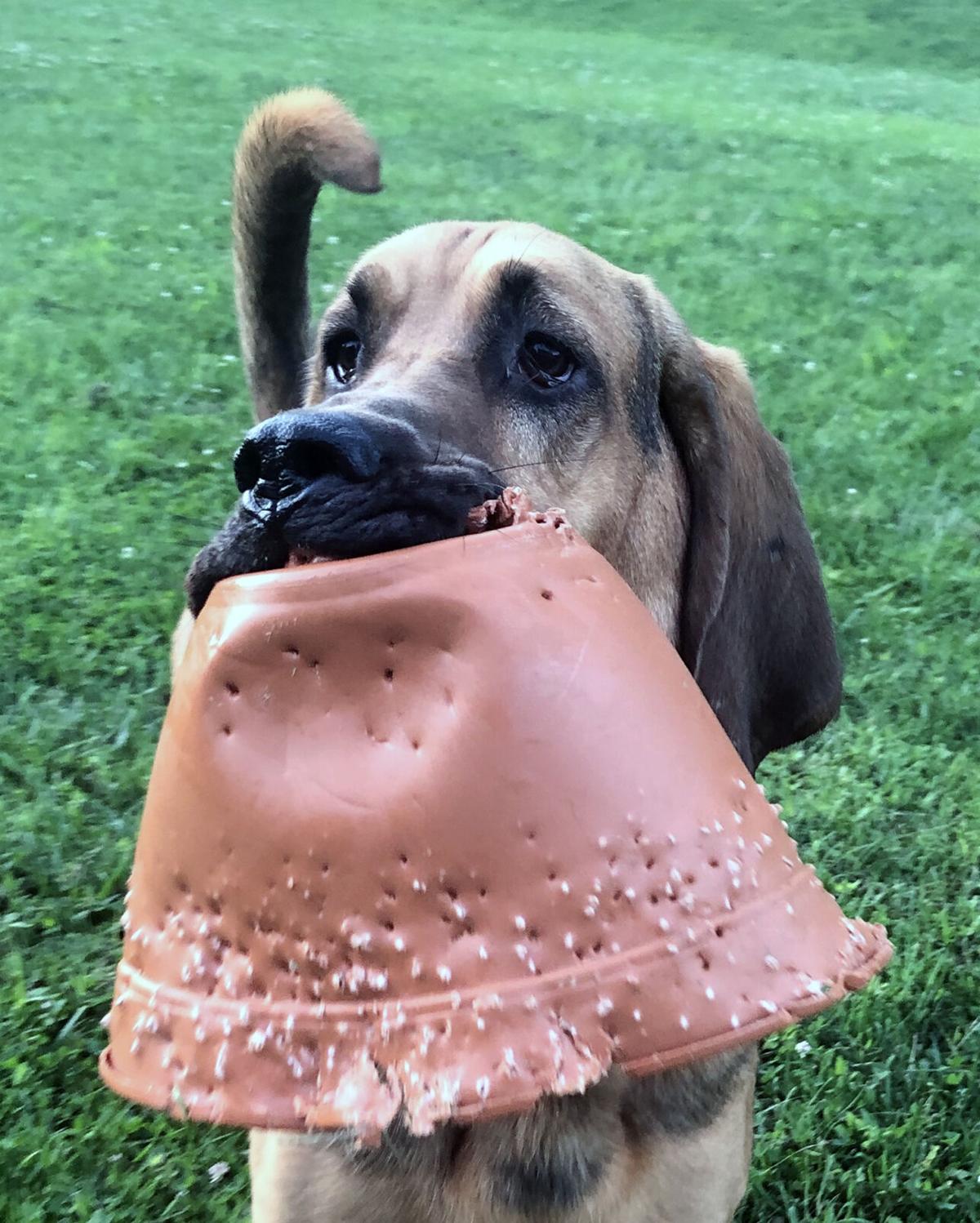 You never know what Daisy Duke might turn into a play toy. The fate of the plant that formerly inhabited this flower pot is unknown. 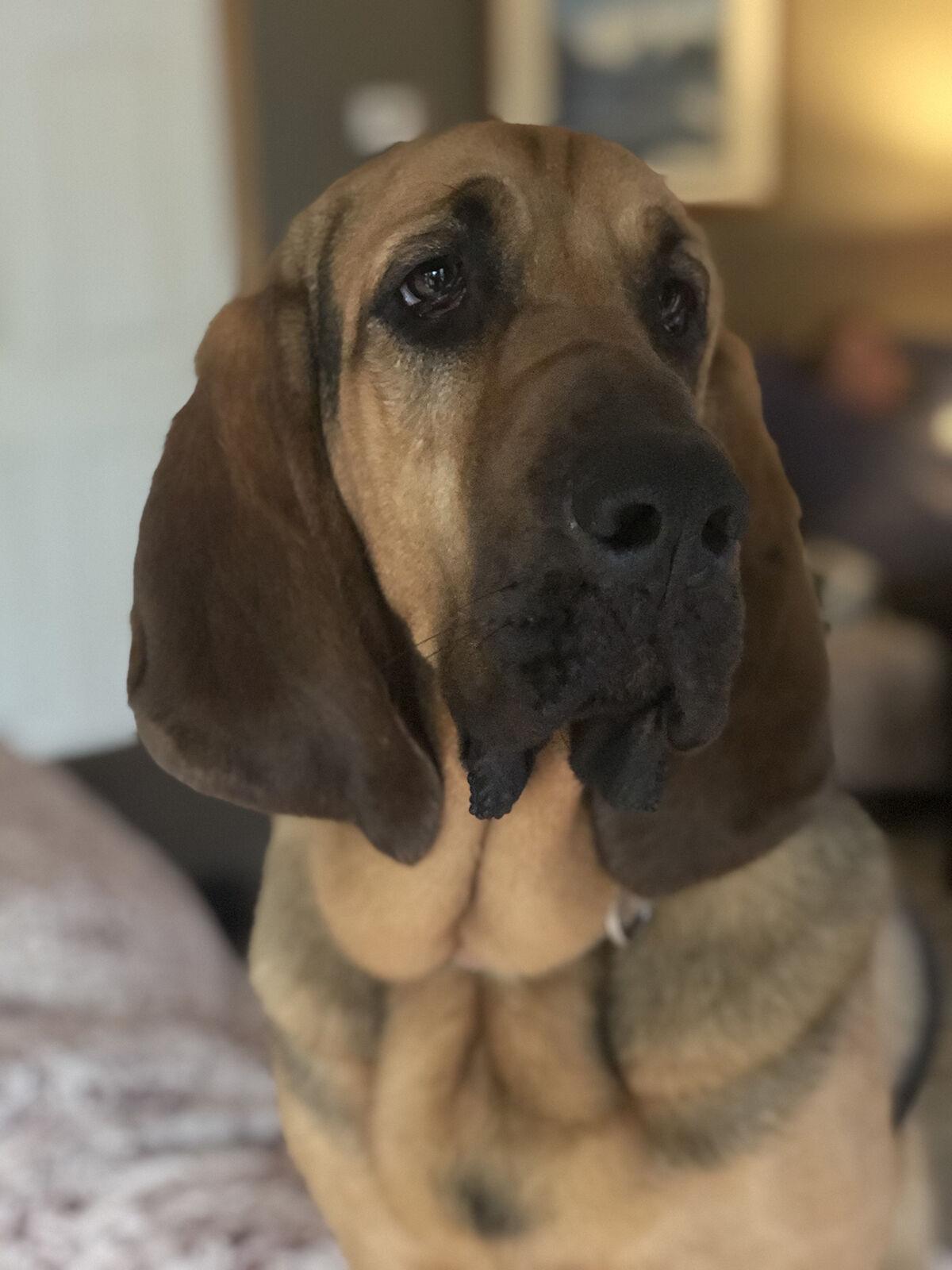 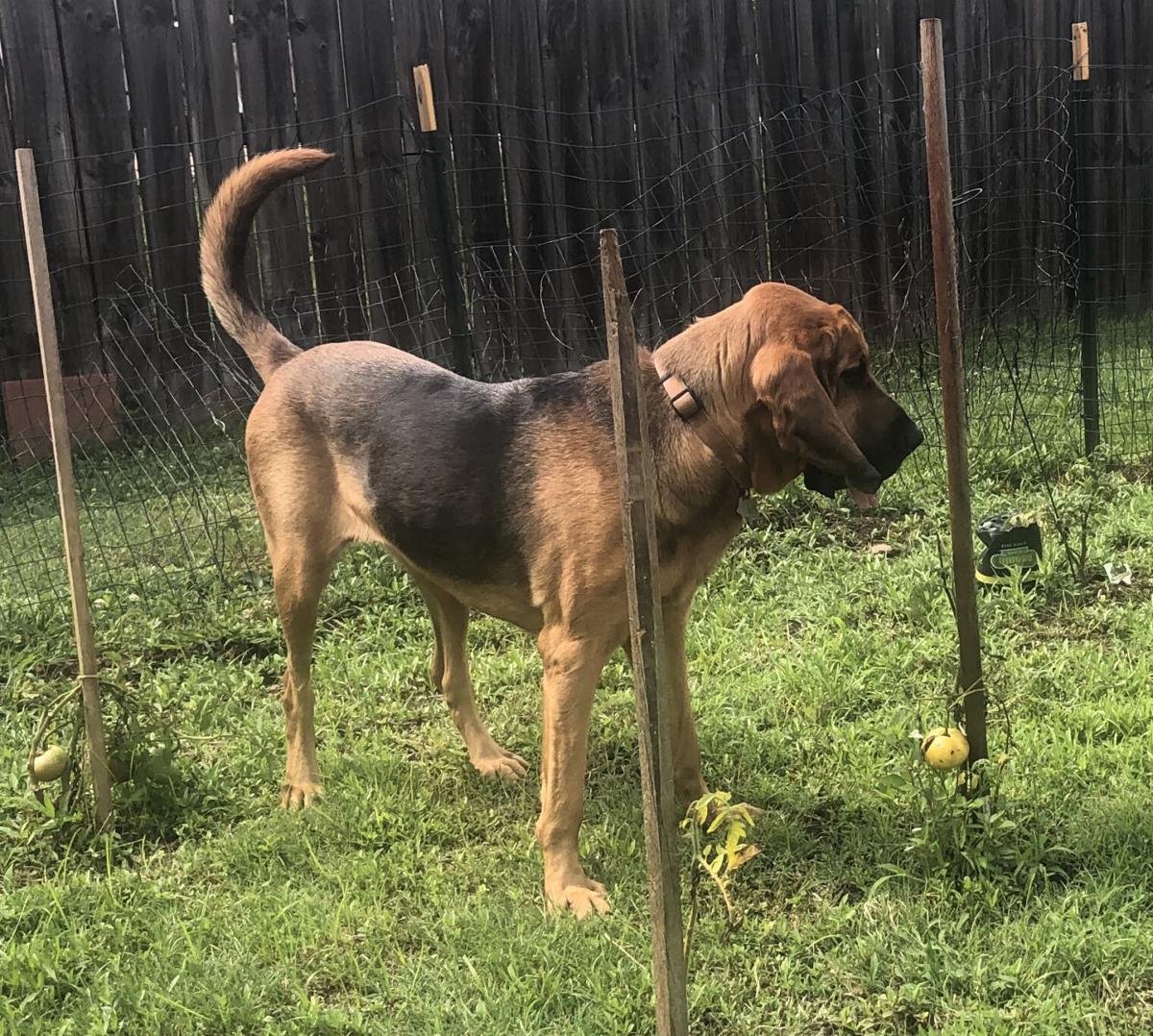 Daisy Duke took her time in picking out her favorite produce in what's left of the garden. 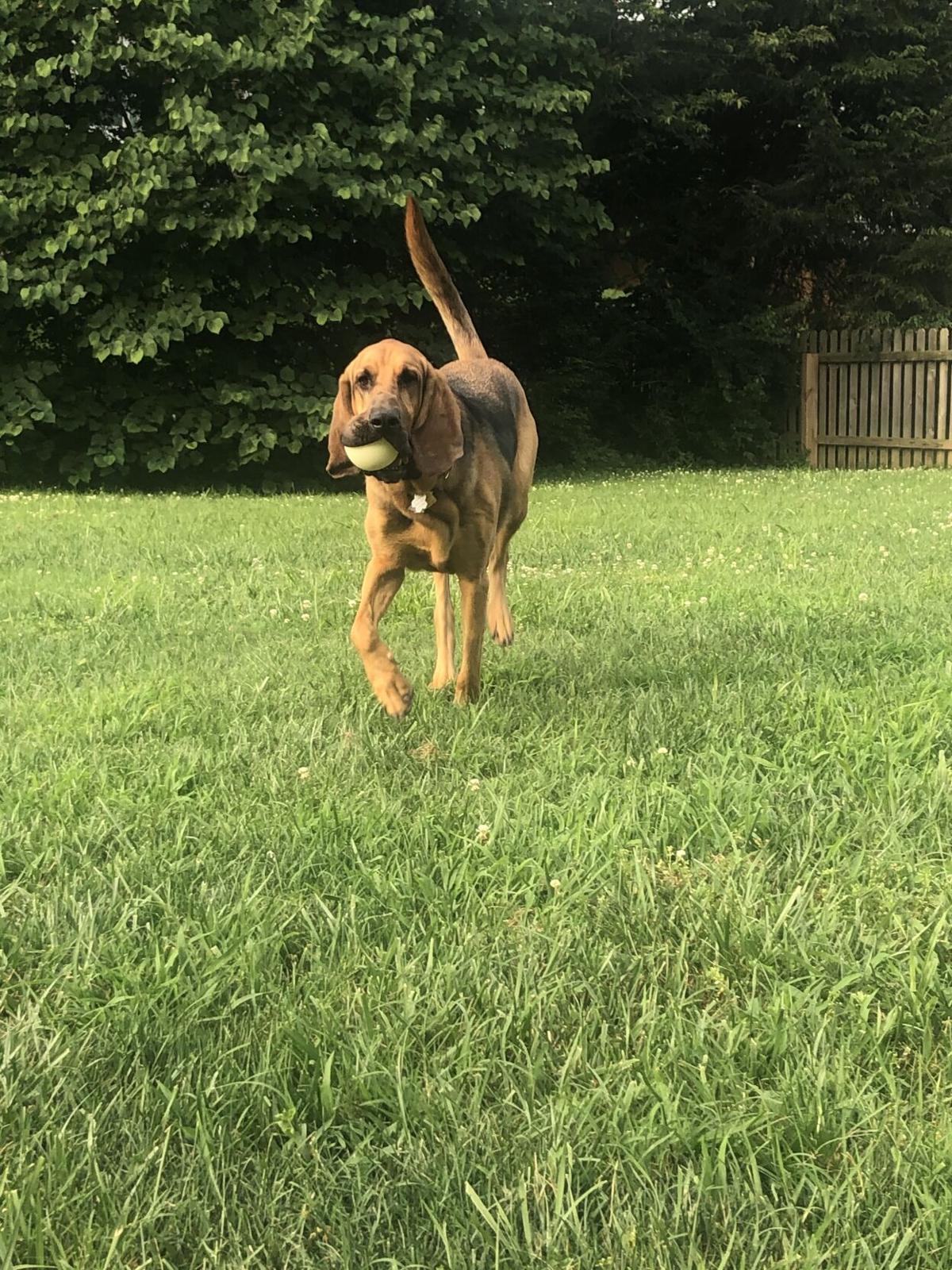 Once in a while Daisy Duke plays with toys.

Daisy Duke gets lazy on the back porch when the temperatures soar.

You never know what Daisy Duke might turn into a play toy. The fate of the plant that formerly inhabited this flower pot is unknown.

Daisy Duke took her time in picking out her favorite produce in what's left of the garden.

Once in a while Daisy Duke plays with toys.

Q: When is a big dog a little hoarse?

A: When your 80-pound bloodhound loses her voice.

We went out of town for a few days two weeks ago and Daisy Duke and her step-sisters spent some time at “doggy camp.”

Our hound has always been a vocal one. She sings, bays, howls and, of course, barks.

When we came back to pick her up, a funny thing happened. As she barked for us, she sounded different — in a silly way.

Daisy Duke didn’t completely lose her voice, but it was almost gone. She must have sung herself to sleep each night.

Daisy’s small step-sister Piper, normally the yappiest one of the bunch, completely lost hers. She normally serves as the doorbell at our house. When someone comes to the door, she lets us know. The other dogs take her cue and it turns into pure pandemonium.

When they got home, Piper sounded like somebody learning how to play the bagpipes with the volume switch turned down real low.

I think they must have been singing back and forth to each other.

Our red tick hound Fern, on the other hand, wasn’t affected by all the excitement. We figure she must have just sat back and listened. She’s always been as cool as the other side of the pillow.

Before we left, Daisy Duke almost recreated a scene from a popular off-the-wall Christmas song.

My mom came for a visit and we had Daisy on the leash. Suddenly it was no longer a bloodhound at the end of the leash. Daisy Duke turned into a kangaroo.

She’s enthusiastic — too much sometimes — and genuinely loves people. She pulled me toward Mom, who had genuine fear in her eyes as she turned and literally sprinted around the back of the car to safety.

We almost had to tell our kids that Grandma got run over by a bloodhound.

Luckily everybody was safe.

Fifteen minutes later, Daisy Duke was sprawled across her rug on the back porch taking a nap. She goes from 100 mph to zero in a split second.

Now, Daisy Duke’s voice is returning and that really is music to a bloodhound family’s ears.

She loves to sing along when I “play” the harmonica and one day she was up on her hind legs, holding onto the railing on the back porch. As she looked out, she sang loud and hard. I was enjoying hearing her song until I put an abrupt end to it.

The next-door neighbors are selling their house and there was a strange car in their driveway. Immediately I felt sheepish, thinking they were showing the house and Daisy Duke was scaring prospective buyers away. It turned out to be a false alarm. It was just a visitor who looked up, smiled and said hello.

We’ve always joked that when Daisy Duke doesn’t want to do something she turns into liquid. When it’s time to come in, it has to be on her terms.

She’ll flop onto the ground and spread out. It’s amazing how long and loose a bloodhound can get when they don’t want to be moved. It’s almost like she has no bones.

Grab her collar and she goes limp. She knows the game and so far she’s undefeated.

The last time this happened, she happened to be chewing on a pretty good size cucumber.

As you might have heard, Daisy Duke is the master of our garden and one day, somehow, she and Fern both got cucumbers.

This time, however, it might not have been the usual suspect. Fern has been caught in the garden a time or two herself. We’re starting to think they’re in cahoots.

Our garden has had so many breaches from the dogs that the rabbits are getting mad.

At least if those rabbits get in her garden, Daisy Duke has enough of her voice back to let us know.