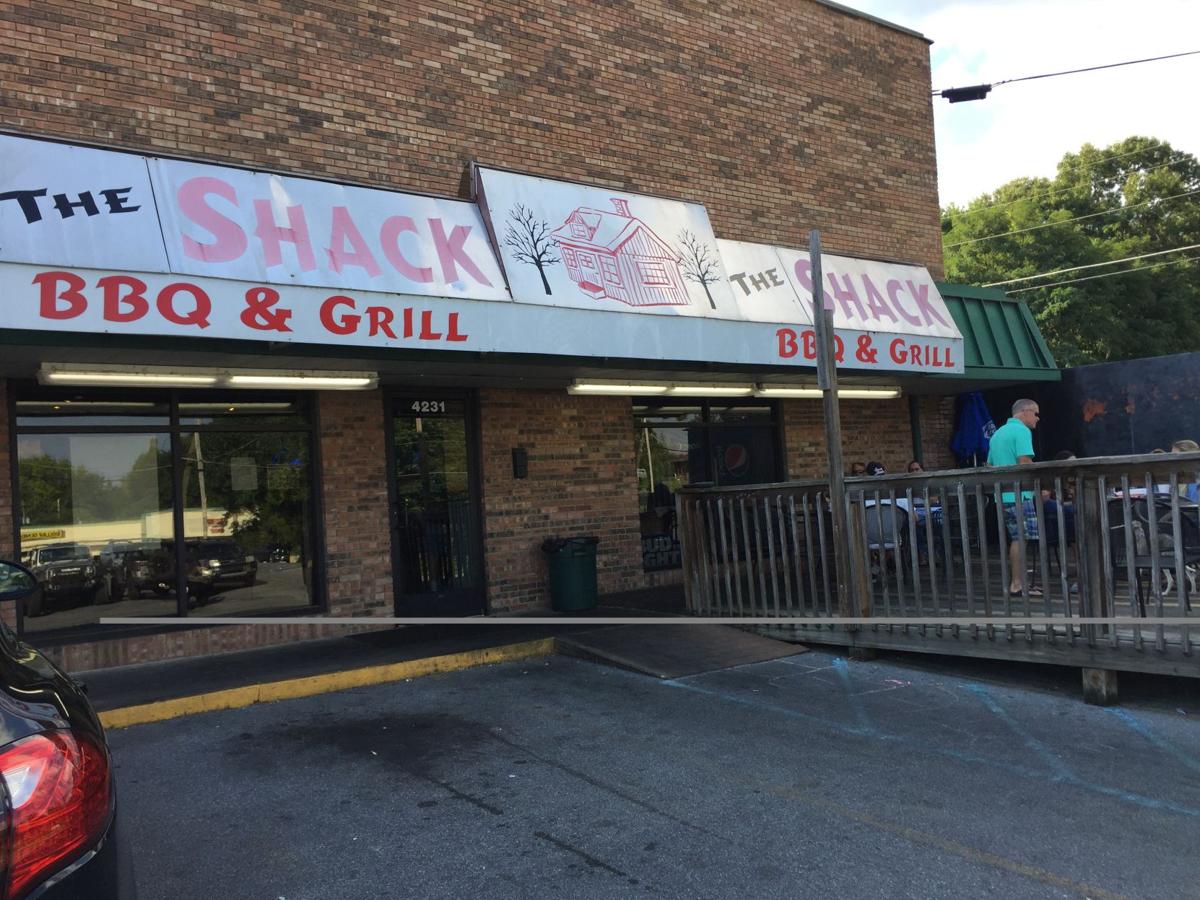 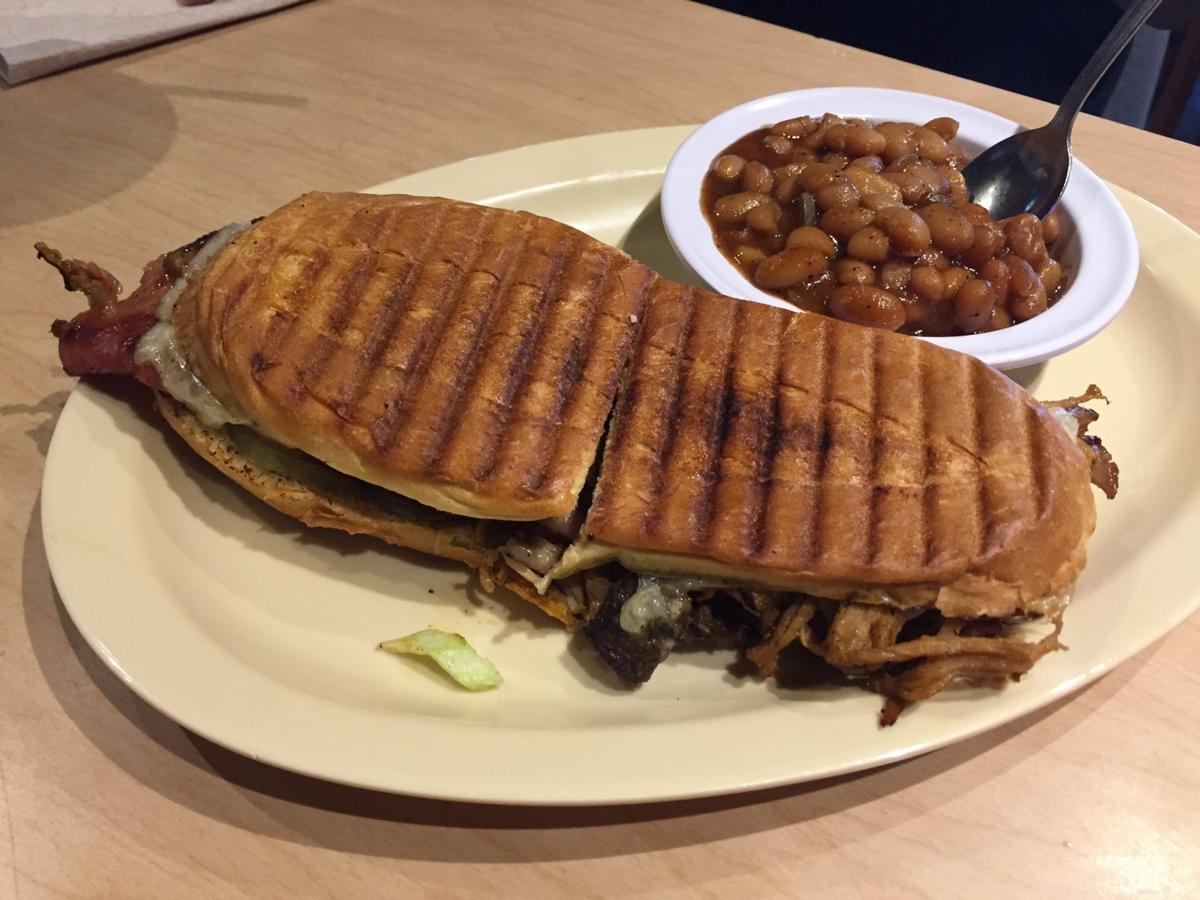 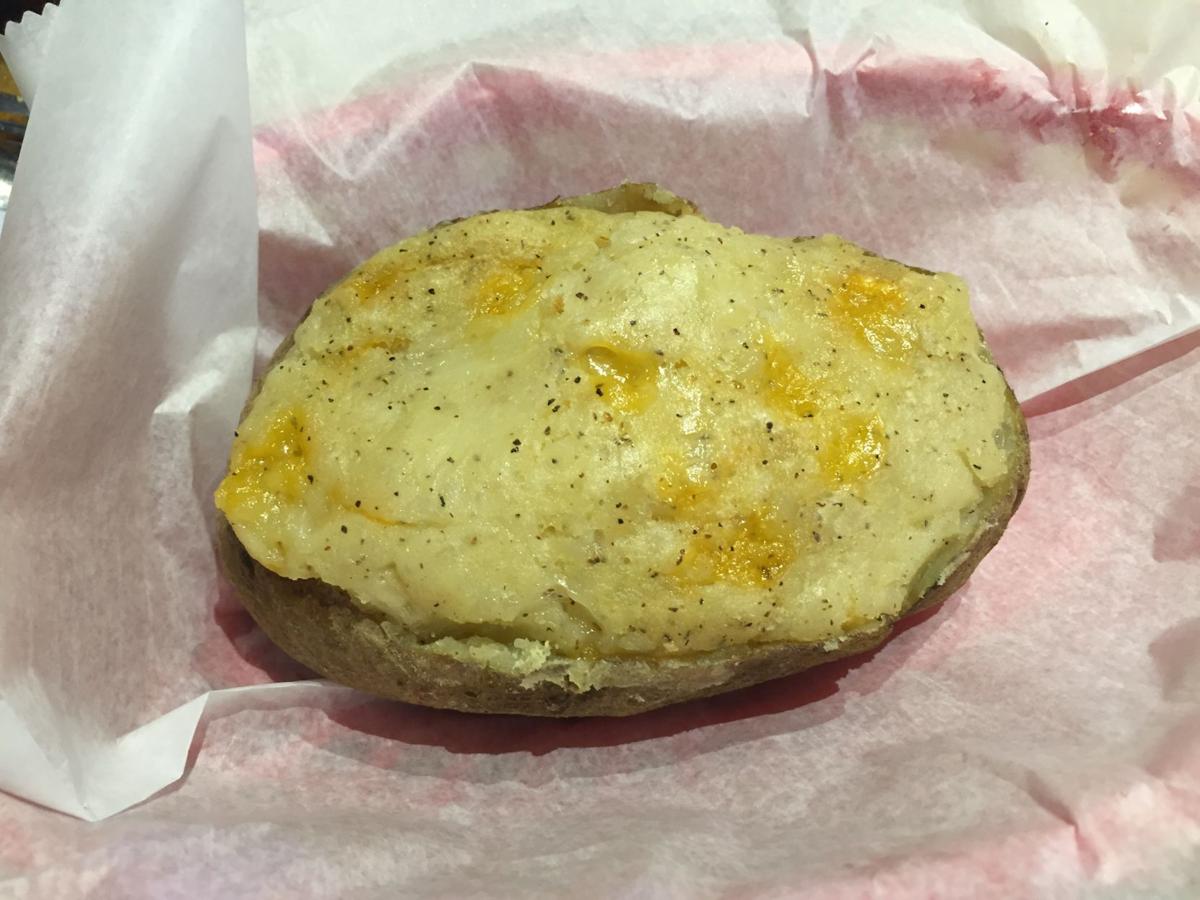 The Shack twice-baked potato side 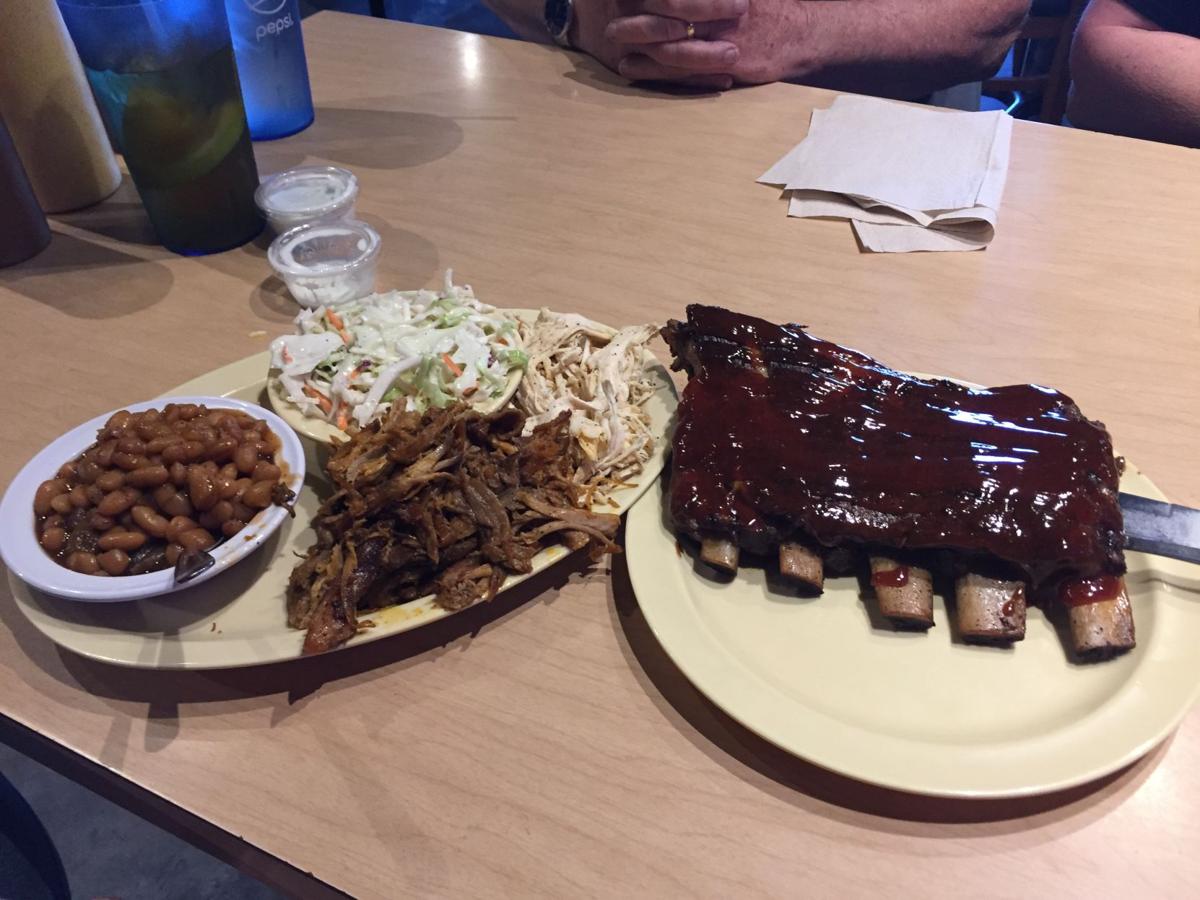 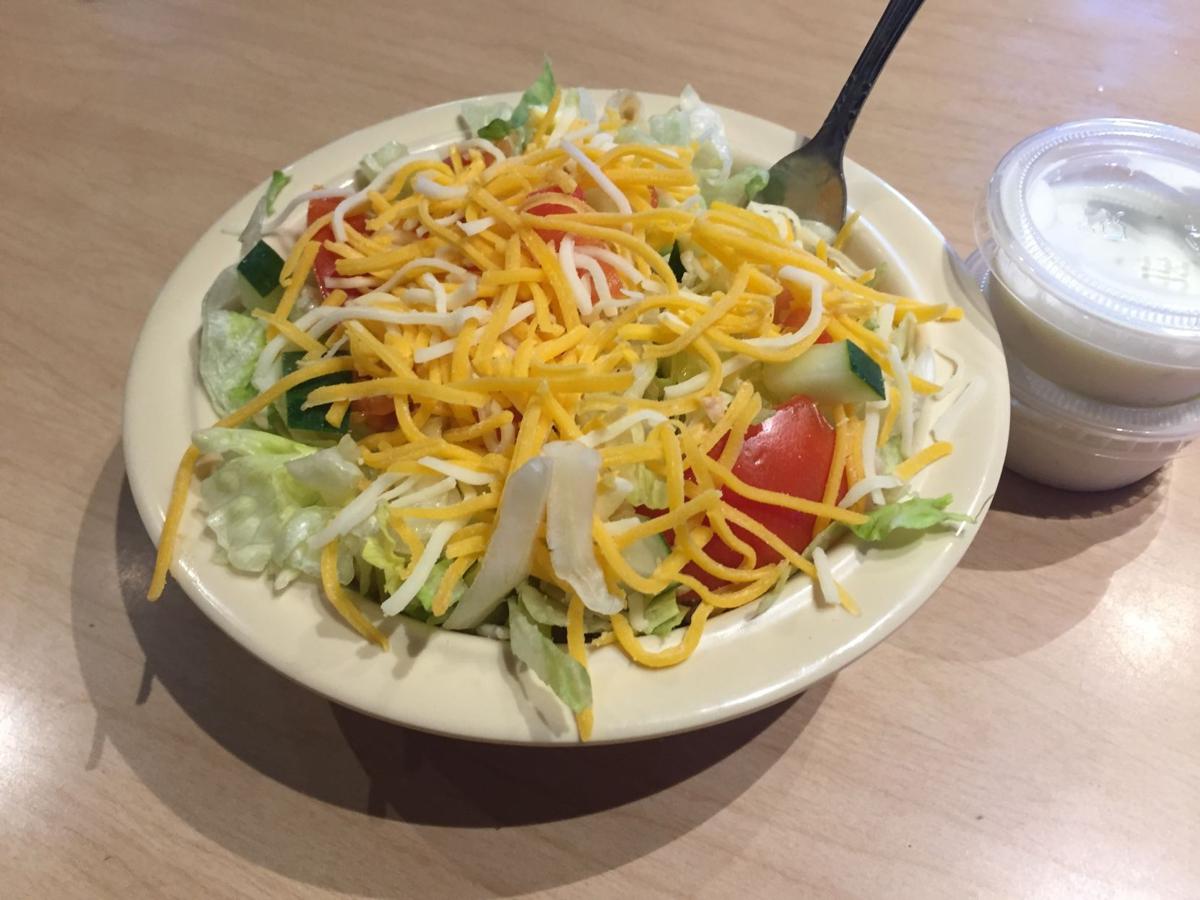 The Shack side salad 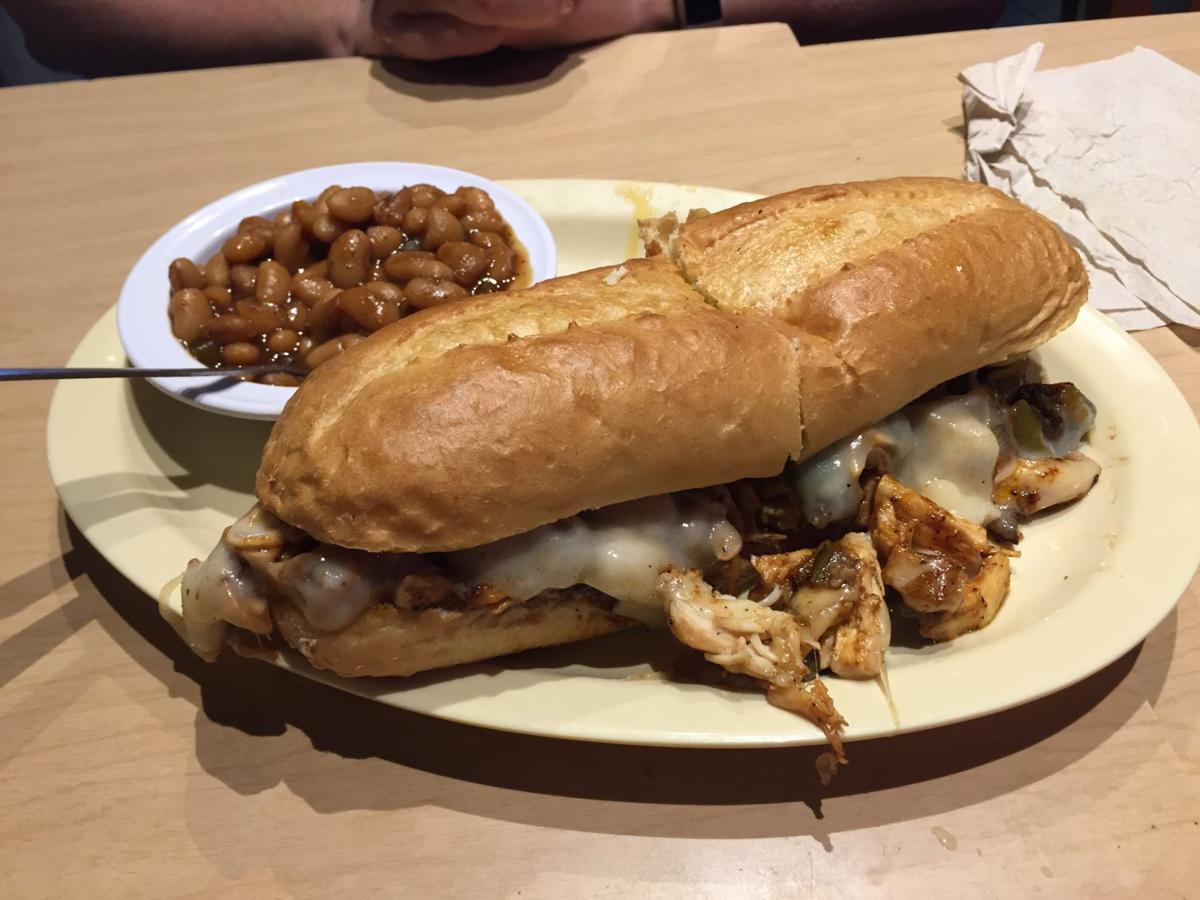 The Shack twice-baked potato side

The Shack side salad

It was the Carnivore who let the rest of us know that he had found real barbecue from a real barbecue joint and it wasn’t to be found in Carter County, Tennessee.

“You got to come with me and try some of what Patrick and Levi are selling out of a basement,” said the Carnivore, as a small trickle of drool ran down from his mouth to his chin.

“Give me the keys,” said my dining partner, “I’m driving. That (indicating my meat-eating friend) is in no condition to.”

Twenty five minutes found the four of us pulling into a parking lot in (of all places) Colonial Heights, Tennessee. There, sporting a wood-framed deck festooned with party lights, was The Shack.

“The Shack” is a misnomer of sorts. Eleven years ago, the proprietor of The Shack, Mr. Patrick Manning decided to sell barbecue and good things to go with it from a former restaurant location tucked in what can charitably be termed a “garden storefront” in the downstairs of a strip mall just off Fort Henry Drive in Colonial Heights. The dining area seats about sixty in various table configurations, with a big black chalkboard on the interior west wall of The Shack announcing the daily specials. The Carnivore steered the rest of us to a table in the middle of the dining area. Our server, Levi, who’s smiling face seemed to be partially obscured by low-hanging clouds, assisted us in navigating The Shack’s menu.

Barbecue Chicken Philly sandwich: The Dieter ordered one of The Shack’s barbecue chicken Philly sandwiches ($7.99), sided with a serving of the Shack’s excellent baked. Levi had the sandwich and beans in front of our friend inside of ten minutes, along with some advice on the three barbecue sauces you can try out at The Shack. First, there’s good ol’ Tennessee Red sauce, ketchup and molasses-based, thick and medium spicy, it’ll go well with just about anything on The Shack’s menu. The next barbecue sauce, uses spicy brown mustard and some fresh ground black pepper for a back-of-the-throat note of lingering heat. Adding some ground cinnamon goes surprisingly well with the sauce’s mustard base. Alabama White, the third sauce, is a mayonnaise and black pepper-based barbecue sauce that is absolutely made for chicken and poultry and the Dieter enjoyed it very much. Oh, and her baked beans were tasty as well..

Cuban sandwich sided w/ baked beans: The Carnivore had checked The Shack’s chalkboard for the daily special, and chose their Cuban sandwich ($9.99) with some of the baked beans as his side order. This is the increasingly-popular sandwich recipe that has been showing up on several menus around the Tri-Cities of late, but with a neat twist added as only Mr. Manning’s kitchen can. First take a 12-inch ciabatta bread loaf and toast it just so, then layer on the pulled smoked pork shoulder meat, and then several, and I do mean several slices of deli-quality lean boiled ham. After that, add several slices of aged Emmenthaler Swiss cheese, some dill pickle chips along with a squirt of yellow mustard. Grill the sandwich until all the cheese has melted and then serve with some of those great baked beans.

Barbecue Sampler Platter: My dining partner and I decided to share one of The Shack’s barbecue sampler platters ($17.69). The sampler platter comes with a portion of smoked white meat chicken, some smoked and pulled pork shoulder, and a half-rack of Saint Louis-style smoked pork ribs. My dining partner chose the coleslaw while I picked the baked beans for sides. I then added a side salad and my dining partner ordered a twice-baked potato, both $1.39 each. The smoked chicken was quite good, while the pulled pork was the leanest I had ever tasted. Nicely prepared, indeed. The real star of the platter was the St. Louis-style pork ribs, which my dining partner made solely hers. You’ve heard the term “fall off the bone?” These smoky, meaty ribs were really “fall off the bone,” leaving nothing but a pile of bones picked clean and all marrow-ed out. As for the sides, my salad made a good palate cleanser, while the coleslaw and twice-baked potato pleased my dining partner very much.

Final Thoughts: The dine-around bunch and I learned a valuable lesson as we finished dining on barbecue and then some at The Shack. If prepared with care and attention to detail by people who really love smoked meats, then great barbecue can come from just about anywhere, and that includes a basement. Patrick Manning, Levi and the rest of the crew at The Shack in Colonial Heights are making the real stuff, folks. I suggest you swing by to see and taste what all the hubbub is about. And remember, the early birds get the best table.