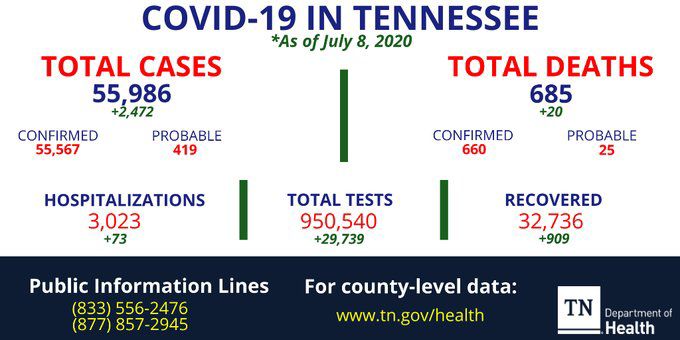 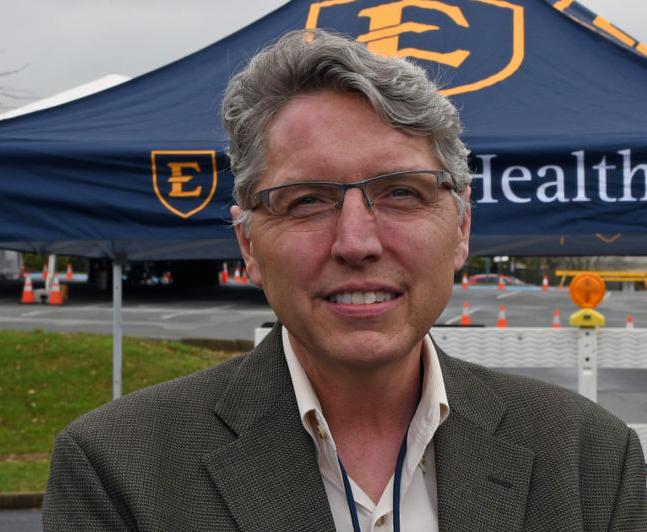 “There is a huge issue with travel,” Moorman said Wednesday. “Clearly people are traveling places, not taking precautions when they travel, coming back and bringing it back to Tennessee. The vast majority of cases have some kind of travel related to them.”

Moorman said people should be taking every precaution possible if traveling.

“If you’re cautious, you don’t get it,” Moorman said. “I think when (people) are traveling, they're not cautious, they’re not following the rules, they’re not social-distancing.”

At a press conference Wednesday, Tennessee Gov. Bill Lee called the spike in cases “absolutely concerning” and said state officials were “very concerned about the spread.”

“That’s why we’re talking so much about masks, distancing, washing hands and the things that slow the spread,” Lee said.

Tennessee Department of Health Commissioner Dr. Lisa Piercey attributed the increase in new cases to a record number of tests administered (29,739), citing a steady positivity rate of about 8%.

"We see this continued increase, which means this is not slowing down," Piercey said during Wednesday's press conference. "We have to continue making those efforts that we've talked about so much, but I'm not additionally concerned today anymore than I was yesterday, which was still a high-level of concern, but nothing extreme today."

Moorman said the vast majority of new cases can be attributed to people continuing to flout public health recommendations, and urged people to begin following them if they haven’t already.

“It’s absolutely urgent that they do it now or it’s just going to keep increasing,” Moorman said, cautioning that continued disregard for public health guidelines could lead to businesses shutting back down. “Ultimately, we’re going to have to start shutting down things again, shut down businesses, shut down bars, shut down non-essential services again if we can’t get ahold of it.

“I think we can get ahold of it, but they have to be a lot more cautious than they were.”

According to state data for hospitalizations released on July 7, only about 1.4% of those infected are hospitalized in the state. More than 70% of the state’s ventilators are still available, as are 20% of intensive care beds. Wednesday’s 73 new hospitalizations are also a single-day record.

Through three days, the state is averaging 1,518 new cases per day, an increase from last week's average despite. At least 1,000 new cases have been reported in 10 of the last 12 days.

Also on Wednesday, two local nursing homes reported cases of COVID-19, with one appearing to be in the midst an outbreak.

As of Wednesday, Christian Care Center of Bristol had reported 12 cases of COVID-19 among its staff and residents — with four residents currently hospitalized as a result. On Tuesday, that total was eight.

“We remain vigilant against this wicked virus afflicting our nation and local community,” a statement from the facility said. “We covet your prayers and support as we all face this worldwide pandemic.”

The outbreak follows a positive test for an employee at the facility on June 25. Since then, six residents and five staff members have tested positive.

Agape Nursing and Rehabilitation Center in Johnson City also reported a positive test among a staff member on Wednesday. That employee is being retested to rule out a false positive result, and is currently self-isolating at home.

No other residents or employees have tested positive thus far, though the center is suspending visitation again.

Novel coronavirus in Tennessee by the numbers: