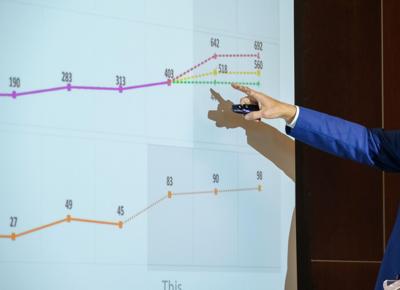 2021 was full of ups and downs in the local fight against the coronavirus — a year in which vaccines first became available to the general public, but also a year in which variants caused devastating spikes in infections, hospitalizations and deaths in the region.

Here’s a look back at some of the region’s biggest coronavirus stories from the past year:

While vaccines were first approved and administered in the region in December, they were mostly reserved for use by health care workers and first responders. For months, the vaccines were only available to those people and people who were elderly. As time progressed the age limit declined, and vaccines were made available to larger groups of people — but not the general public.

Then, at the end of March, Tennessee Gov. Bill Lee announced that all Tennesseans would be eligible to get the shot by April 5 after U.S. President Joe Biden set a goal for all states to open eligibility to everyone by May 1. By the end of March, everyone in Northeast Tennessee who wanted the shot could get one as health care workers raced to vaccinate as many people as possible.

While there was an initial spike in the number of people getting vaccinated, that number began to decline as the weeks and months went on, particularly over the summer when cases of COVID-19 were at their lowest point since the early months of the pandemic in 2020. In July, Washington County became the first county in Northeast Tennessee to at least partially vaccinate half its population, a number that’s now above 64%.

Those percentages will decline, however, if and when that definition is amended to only recognize those who have been boosted as fully vaccinated. Of the 2.4 million people who’ve been fully vaccinated statewide, only about 45% have received a booster shot.

Just over a month later the variant was the dominant one in Northeast Tennessee, causing concern among health officials who worried the region might see another surge — one that, fortunately, did not see the same devastating number of infections, hospitalizations and deaths from the region’s winter surge, but did claim dozens of lives in the area.

Heading into the summer, the region’s coronavirus metrics were steadily improving with the region reporting its fewest number of new infections, hospitalizations and deaths since the previous summer. And while the delta variant was concerning to local health officials, few expected it would cause the kind of catastrophic surge it did, with one local health official saying “I don’t think we’re going to see anything like we saw back in December.”

The first cases of the variant, which was more infectious than the alpha variant, were diagnosed in the region in early July and sent new infections and hospitalizations skyrocketing almost as quickly as it arrived.

Just over a month after the variant was first reported in the region, officials with Ballad Health began warning people that hospitalizations could reach record numbers and pleaded with people to get the vaccine. In August the system halted all non-emergent surgeries, and National Guard troops were deployed to local hospitals to assist.

On Sept. 4, the hospital system reported a record number of people hospitalized with COVID-19 — breaking the record of 361 reported at the height of the winter surge on Jan. 5. On Sept. 7 they surpassed the 400 mark, and peaked at 413 on Sept. 8. In the two months between Aug. 1 and Sept. 30, 284 people were reported to have died of COVID-19 in Northeast Tennessee — a number that will increase when the state adds a backlog of more than 2,000 virus-related fatalities that had not yet been logged.

Now in December, the region is facing another increase in infections, though hospitalizations have plateaued since they began rising again in November. And with the omicron variant — another even more infectious variant that does appear to be less severe — beginning to circulate in the state, it remains to be seen whether this region has seen the worst of the pandemic, though it seems unlikely it will see anything approach the levels seen in August and September.

On March 4, 2021, Northeast Tennessee reported its 1,000th virus-related death — a grim milestone that came less than a year after the region reported its first death in April 2020. Ballad’s Chief Infection Prevention Officer Jamie Swift called it a “heart-breaking” and “devastating” toll at the time, with more than 60% of deaths reported during the winter surge between Nov. 1 and Jan. 31.

Since then, the region’s death toll has continued to climb, albeit not nearly as precipitously. As of Dec. 23, Northeast Tennessee’s COVID-19 death toll was 1,689 — 1,689 people in our region who had their lives cut short by the virus, and 1,689 families that will never be the same.

In December, the region reached another milestone when it reported its 100,000th infection — the majority of which have been reported in Sullivan (29.7%) and Washington (24.3%) counties. As of Dec. 23, Northeast Tennessee had reported 101,757 COVID-19 infections — nearly a fifth of its total population.

Jonathan Roberts is a reporter and photographer for the Johnson City Press covering Health Care, Johnson City and Jonesborough. He is a member of the National Association of Hispanic Journalists, and has been with the Press since 2019.