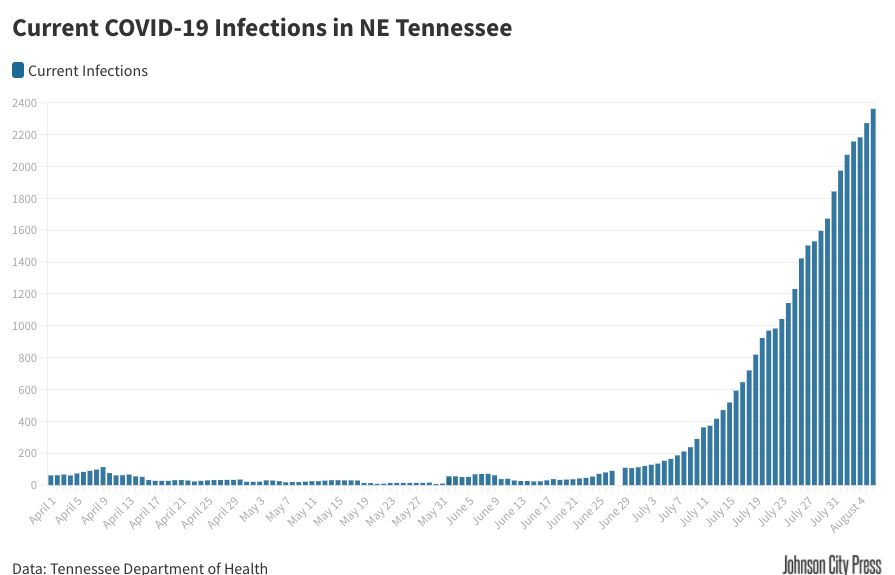 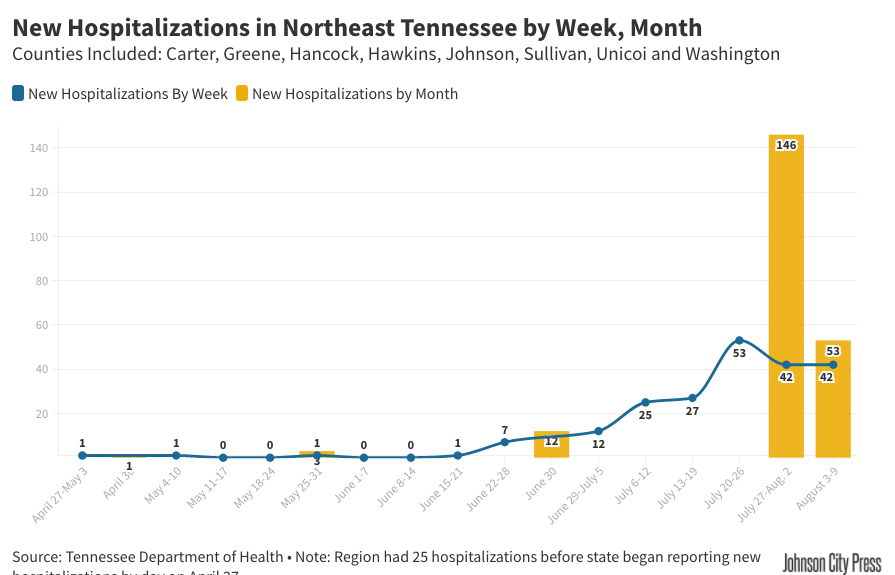 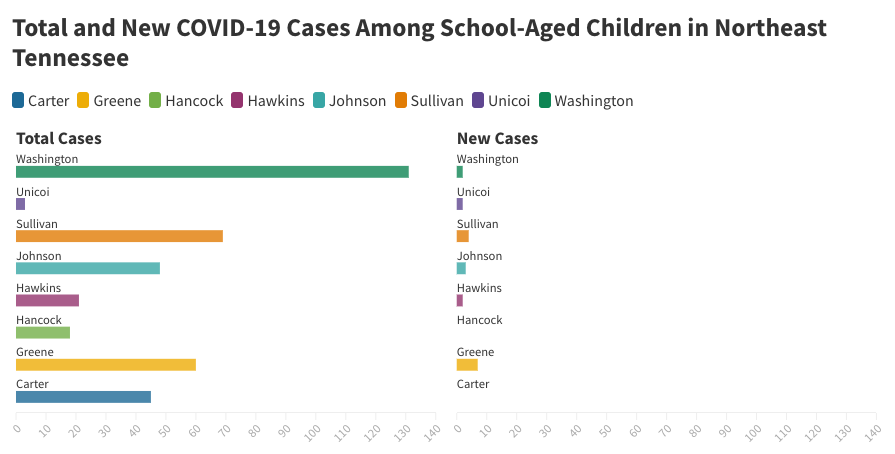 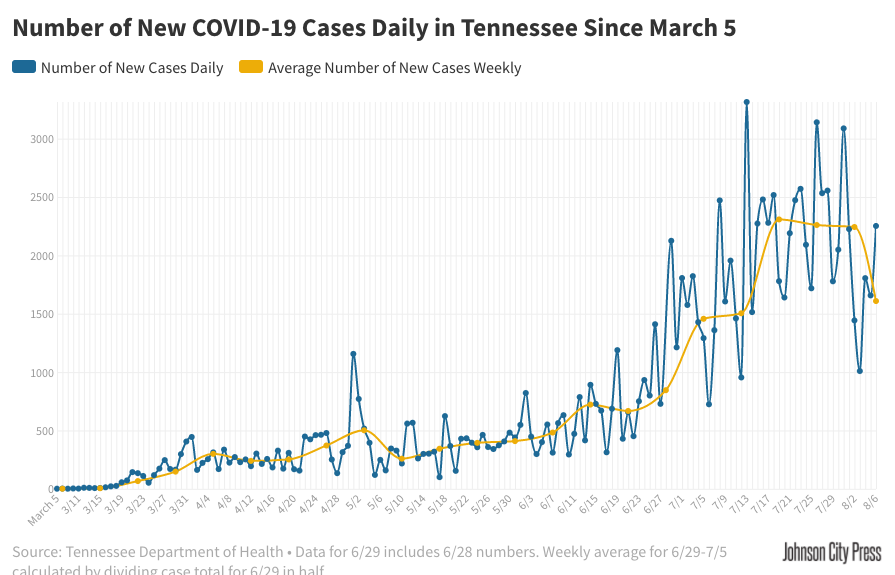 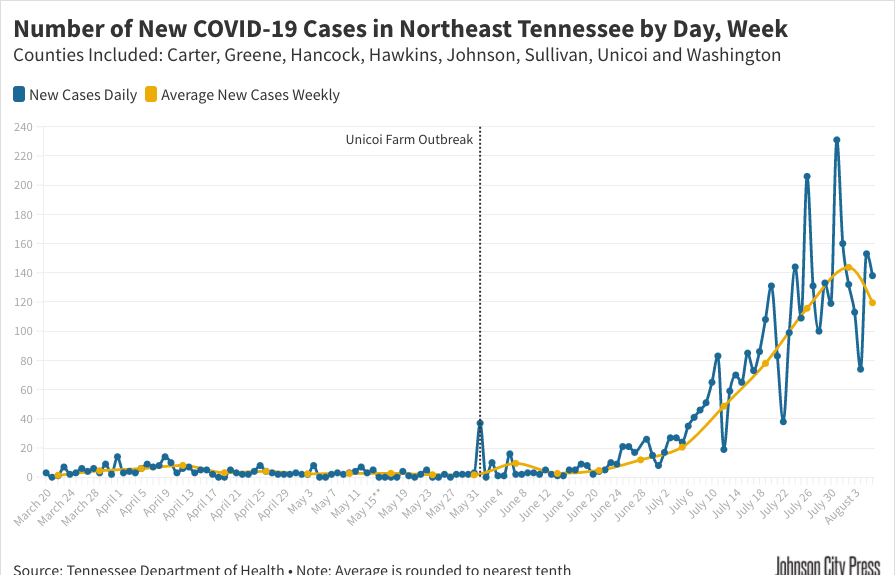 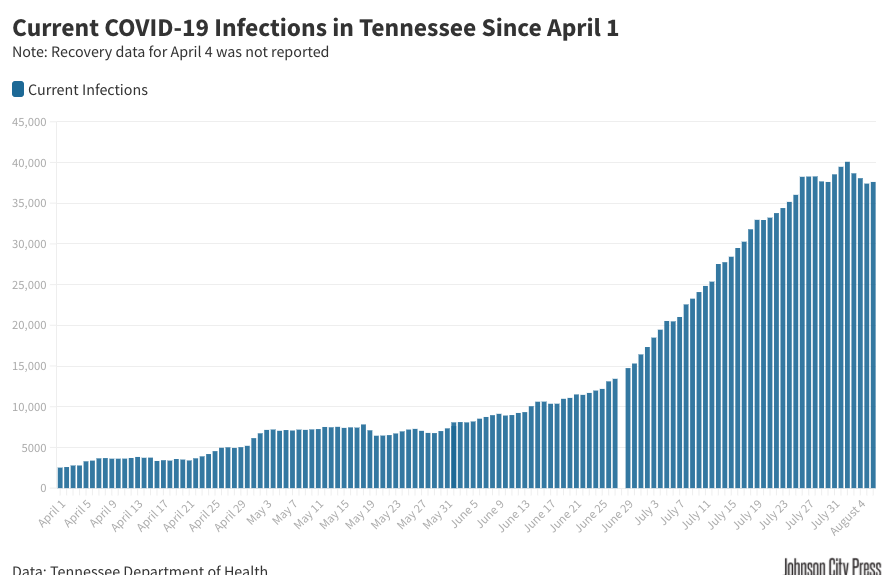 Northeast Tennessee recorded four more COVID-19 deaths on Thursday, pushing the weekly death toll to eight — all of which were reported in the last two days. It is the second-straight day of record deaths in a single day. Last week was the deadliest week of the pandemic for the region, with 11 fatalities reported.

Sullivan County, after declining in back-to-back days, saw its active case count jump up 14, keeping it with the fourth most active cases in the region. Carter, Greene and Hawkins counties saw double-digit jumps in their active case totals, while Unicoi County added four. Carter has the second most active cases, followed by Hawkins, Sullivan, Greene, Johnson, Unicoi and Hancock.

There were 62 new recoveries reported Wednesday, pushing the region’s total to 1,405. Just over 37% of the region’s cases are recovered, with the most recoveries occurring in Sullivan County.

Testing was down slightly on Thursday, with just over 1,000 new tests recorded. The positive test rate was 14.5%. Last week, the region saw around 1,600 tests per day.

Ballad Health reported a slight dip in the number of COVID-19 inpatients on Thursday, down five to 93 from Wednesday’s count. There were 34 patients under investigation, along with 22 patients in intensive care and 12 on ventilators.

The number of new hospitalizations remained in the double-digits on Thursday, with 12 more reported across the region. Sullivan County saw the most with five, while Carter (three), Greene (one), Hawkins (two) and Washington (one) all saw new hospitalizations. There have already been 42 new hospitalizations this week, which ties last week’s total and is just 11 below the record set the week of July 20-26.

There have been 53 new hospitalizations this month, with at least 240 over the course of the pandemic.

Northeast Tennessee saw 20 new cases among school-aged children on Thursday, with Greene County (seven) reporting the most. The Greene County increase is likely tied to an outbreak among Greeneville High School’s football team.

Other counties reporting new cases were: Hawkins (two), Johnson (three), Sullivan (four), Unicoi (two) and Washington (two). There have been nearly 400 cases in the 5-18 age group in Northeast Tennessee.

There are 231 confirmed cases of COVID-19 attributed to the Veterans Affairs facility at Mountain Home, with 91 active cases and 133 recoveries. There have been seven fatalities.

Mountain Home is not saying where the deaths or cases are concentrated, citing patient privacy concerns.

According to the Department of Veterans Affairs’ COVID-19 data dashboard, the number of cases includes “all patients tested or treated at a VA facility for known or probable COVID-19.” The same goes for fatalities, which do not have to occur at a VA hospital to count as a VA death.

Drive-up testing in Northeast Tennessee is available for free at the following sites:

The state reported a record number of fatalities on Thursday, bringing the daily average for this week to nearly two dozen.

Thursday’s total snapped a four-day streak of less than 2,000 new cases, though the daily average remained lower than last week for the third-straight week.

This chart shows the number of active cases by county in Northeast Tennessee.

This chart shows the number of total cases and new cases reported among school-aged children (5-18) in Northeast Tennessee by county.

This chart shows the number of new COVID-19 cases reported by county in Northeast Tennessee during that reporting period.

This chart shows the number of active cases, recoveries and total cases by county in Tennessee.

This chart shows the number of new hospitalizations reported by week and month.

This chart shows Northeast Tennessee's COVID-19 curve since March 20 -- the first day the region reported more than one case. The blue line …

This chart shows the number of new cases reported per day in Tennessee since the first case was reported in early March. The blue line shows…