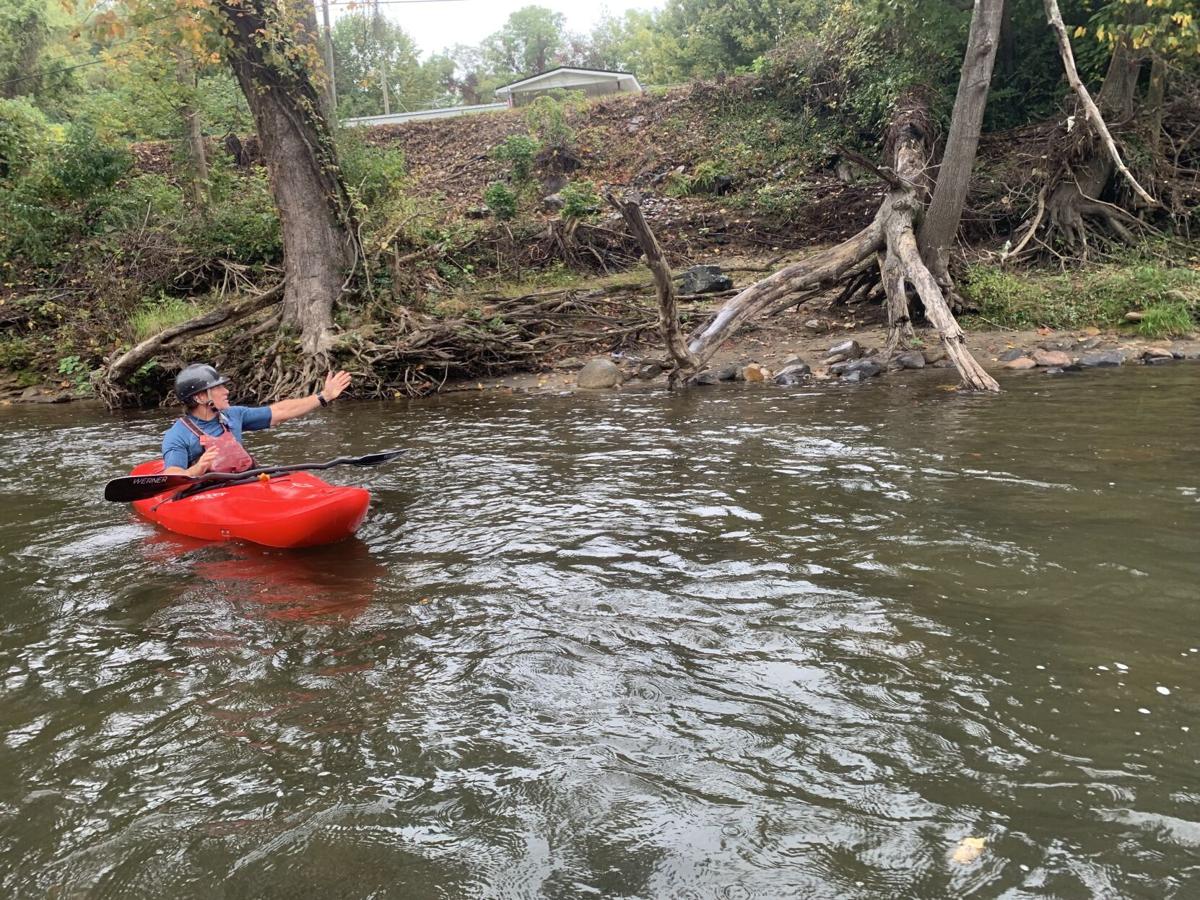 Scott Fisher, owner of NOLI, points to the area where a trotline was placed during the Memorial Day weekend. Fisher said a student in his class was ensnared by the trotline which led him to cut it. 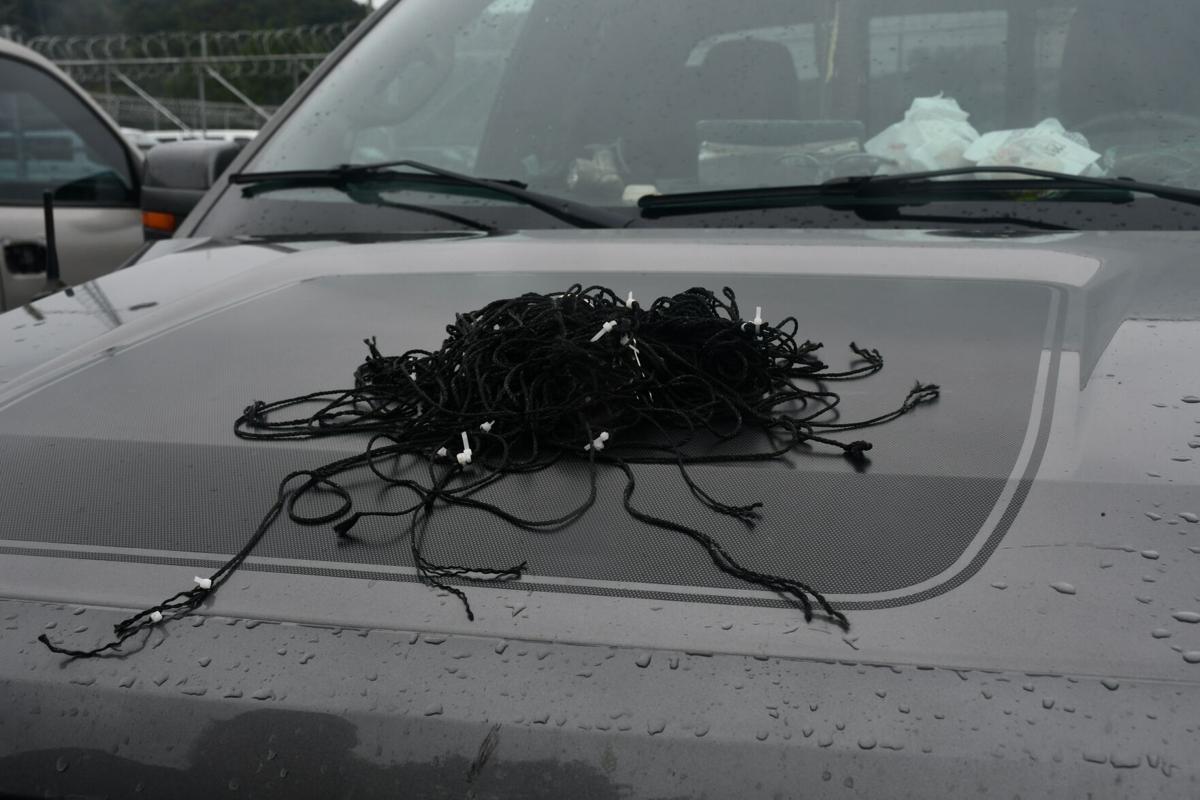 A.J. Silvers, the owner of the trotline, said the damage done by Scott Fisher left the line unsalvageable. Silvers said the line was properly marked and anchored.

Scott Fisher, owner of NOLI, points to the area where a trotline was placed during the Memorial Day weekend. Fisher said a student in his class was ensnared by the trotline which led him to cut it.

A.J. Silvers, the owner of the trotline, said the damage done by Scott Fisher left the line unsalvageable. Silvers said the line was properly marked and anchored.

Fisher was indicted by a Unicoi County grand jury on Sept. 10 on charges of violation of the Hunter Protection Act and taking of a fish caught by another charge. Fisher turned himself in at the Unicoi County Jail on Sept. 22, where he was booked and released.

“A few weeks ago, I got a call from Bethany, the TWRA agent, who said that the DA a couple weeks after, this is going back to June, had contacted her and asked her to bring her case file back to his office, which she did, and then a couple weeks after that (he) informed her that it was going to the grand jury, Sept. 10 I believe, for a decision on whether to prosecute,” Fisher said.

According to the TWRA, trotlines “consist of a main line with drop lines to which single hooks are attached.” In Tennessee, it is legal for trotlines to extend from one side of the riverbank to the other and they must be marked with the fisherman’s name and address or TWRA identification number.

According to Fisher, he and two other whitewater rescue experts were holding a kayak instructor certification class for four students when a student was hooked in his life vest by the trotline just below the Chestoa Recreation Area. The student was the son of Robin Pope, who is one of the top five whitewater safety and rescue instructors in the country. Pope was serving as an instructor for the class.

“We went over and we saw that one of our students was disengaging himself from a thick line, black line, that you couldn’t see,” Fisher said. “And there was also an exposed fishhook that had made contact with his life jacket that he may have been briefly hooked by it, but in any case he was able to free himself from that and we kind of took a look and we didn’t see any, there was no labeling, there was no marking of any sort on it.”

Fisher said he assumed the line was abandoned and, due to the high volume of traffic on the river, cut it in order to keep anyone else from becoming ensnared.

“We did trace it to the left bank and the line was attached to a limb that was sticking out over the river, probably a good 5 to 10 feet from the edge of the river, and then it was another 5 to 10 feet before it actually went underwater and there was at least one exposed fish hook before it went underwater,” Fisher said. “So, again, we took a look, we cut it at that anchor point because we thought it was an abandoned line.”

Fisher said he then cut it from an anchor point in the middle of the river and then again on the other side of the bank. After cutting the line, he said he was approached by Anthony “A.J.” Silvers, the trotline’s owner. Silvers recorded the confrontation between the two and posted the video to Facebook where it has been viewed over 39,000 times.

“We stayed calm the whole time,” Fisher said. “We didn’t get in a big argument about it but we did address our concerns. He couldn’t see it, refused to see it that way. We paddled on.”

Following the encounter, Fisher said Silvers’ father blocked the kayakers from leaving at the river access point and law enforcement was called to defuse the situation.

Silvers, however, said his father never blocked Fisher and his group from leaving the area, and said his trotline was properly marked with the identifying information. Silvers also said he and his fishing partners had taken extra precautions to ensure the trotline was anchored to the bottom of the river.

“No matter if every hook had a fish on it, there’s no way it could’ve come up out of the water,” Silvers said.

Silvers said it took him and two friends hours to make the trotline that he was using to catch catfish for a fish fry. He said the only part of the line that could be salvaged after the incident was the hooks.

Silvers also said rafters cutting trotlines has been an issue for years, and that he has had five lines cut just this year alone.

“I think the reason that they go by and cut it is because they come out of North Carolina, and in North Carolina it’s illegal to set trotlines all the way across the river, but when you get in Tennessee it’s legal and you can do that,” said Eli Nelson, who helped Silvers make the trotline and was with him when it was cut.

Fisher, however, said this is the first incident he has ever had with a trotline, and that there have been no issues between him and local fishermen before.

“I don’t have an issue with fishermen,” Fisher said. “I have friends who are fishermen. I see them out on the river, I wave to them, give them a wide berth, it’s all good. We’re all out there enjoying the outdoors and it’s all good. The issue is with a line stretched across a navigable waterway with exposed fish hooks that can hook a kid, an adult, it doesn’t matter. There’s no place for that. Especially an unmarked line that can’t be seen.”

How do tourism officials balance the needs of residents with businesses attracting visitors to the region?