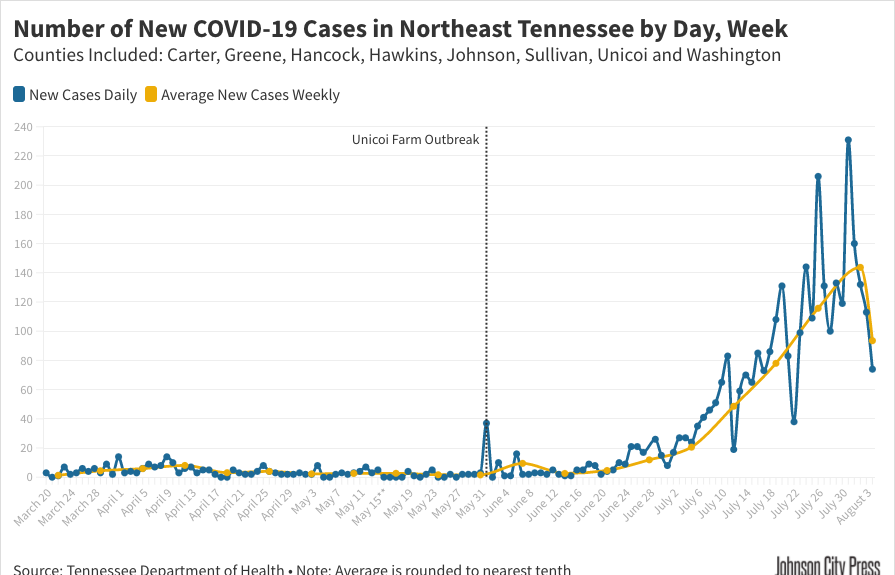 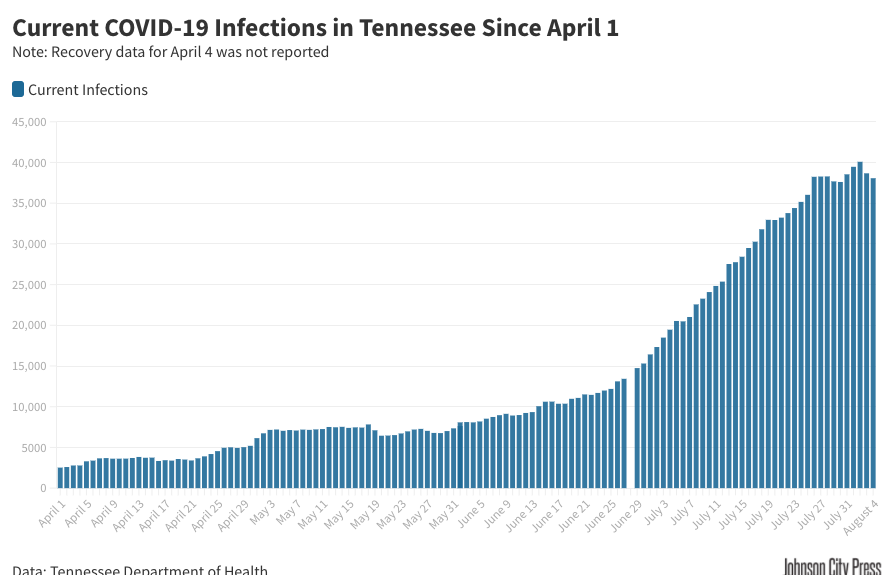 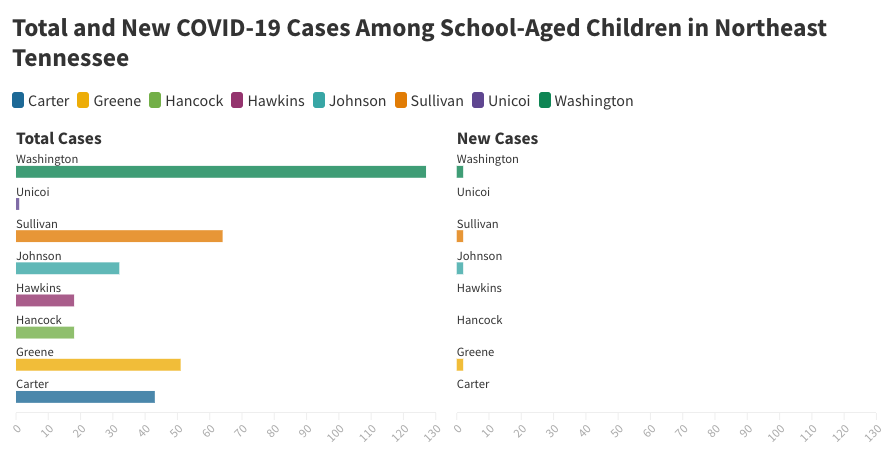 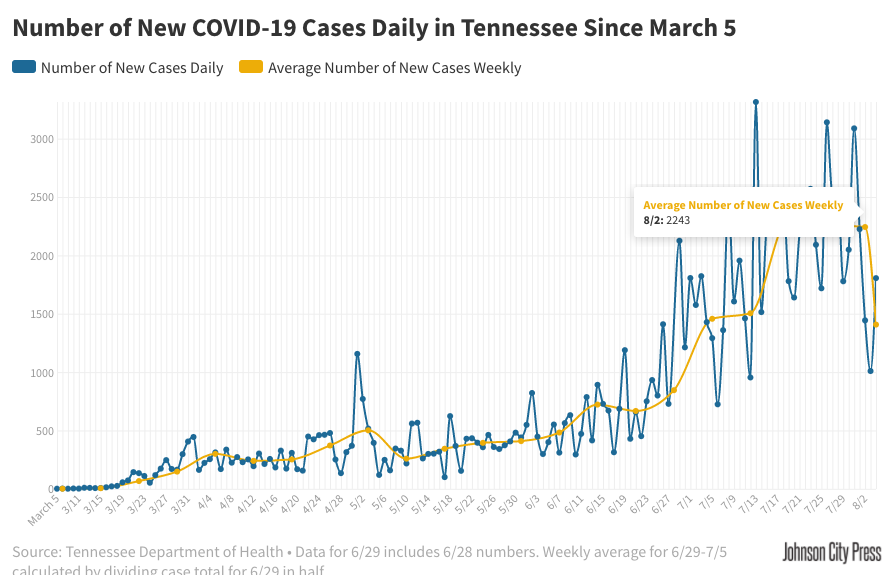 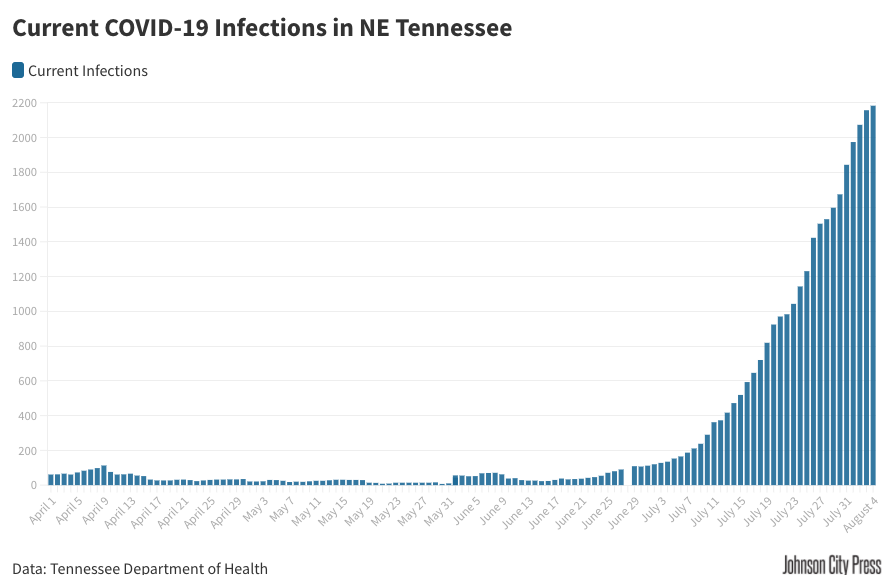 Active cases increased for the 35th consecutive day on Monday, now up to 2,183 active cases. The 26-case increase from Monday is the smallest increase since July 22, when only 13 new active cases were reported.

Washington County’s 798 active cases remain far-and-away the region’s highest total, with Carter County’s 323 active cases still second highest in the region. Sullivan County saw its active case decrease for the first time since July 29, and now only has 12 more active cases than Hawkins County — a county that only has 35.8% of Sullivan’s population.

Johnson County’s active case count continues to rise, up five on Tuesday, while Greene County reported its first increase since Aug. 2. Hancock and Unicoi counties appear to be flattening, with both reporting fewer than 10 new active cases since July 31.

The Department of Health defines “recovered” as people who have been confirmed to be asymptomatic by their local or regional health department and have completed their required isolation period or are at least 21 days beyond the first test confirming their illness.

Northeast Tennessee’s curve has seemingly dropped off a cliff, though that could be due to a significant decrease in the number of tests being performed in the region. The number of new cases has dropped for four straight days, while the weekly average is down more than 50% so far this week. There were only 739 new tests reported on Tuesday, and 573 on Monday — a two-day average of 656. Last week, the region averaged 1,597 new tests per day.

A new report from the Vanderbilt Department of Health Policy and the Vanderbilt School of Medicine found that 31% of new cases and 44% of hospitalizations are being reported in metro areas with less than 1 million people, like Chattanooga, Knoxville and the Tri-Cities. Rural areas adjacent to large and small metro areas account for 20% of new cases and 12% of hospitalizations.

The report, released Monday, said hospitalizations in small metro areas and rural communities have tripled since May, and that their estimates “likely understate the growing burden outside of the major metro areas, as several hospitals in Nashville and Memphis are also treating patients from the adjacent and rural communities.”

“To the degree these changes reflect hospitalizations that have increased rapidly over the last month, these recent trends underscore the potential to stress health care systems in areas with fewer staffing and bed resources,” the report said. “These challenges could then spill over into facilities located in large urban areas, who are likely to see rising numbers of transfers and walk-in cases originating from more rural areas.”

East Tennessee in general has seen one of the largest increases in total hospitalizations in the state in recent weeks, while Middle Tennessee — the state’s hardest hit region — has started to see its hospitalizations decrease. There is hope, however, that those curves will start flattening as the effects of mask mandates in the state begin making an impact.

“Finally, we would note that new cases and hospitalizations are stable, concurrent with increased use of masks in those areas, while areas without mask orders have seen increases,” the report said. “It is also important to note that there are other mitigation strategies in effect or reinstated in these areas that could also be contributing to these trends.

“While these data do not establish a causal relationship, they are consistent with other research about the efficacy of masks at reducing transmission of COVID-19.”

You can read the full report at https://www.vumc.org/health-policy/covid-19-advisory-memos.

Ballad Health reported 97 inpatients and 24 persons under investigation on Tuesday, with 29 people in intensive care and 11 on ventilators. Hospitalizations increased slightly from Monday’s total, though the number of patients on ventilators dropped by two. The number of PUIs jumped significantly, however, up nine and at their highest level since July 23. Ballad’s inpatient total has risen for three straight days, as well, though only marginally.

Across the region, there were seven new hospitalizations on Tuesday, with the most in Sullivan County (four). In Northeast Tennessee, there have been 217 hospitalizations over the course of the pandemic — about 6% of known positive cases.

The Harvard Global Health Institute released guidance on Monday for how schools can safely reopen across the country, with a four-tier plan for reopening schools depending on the level of spread within a community.

According to the guidelines, counties in the red (greater than 25 daily new cases per 100,000 people) should institute remote learning across the board, while counties in the orange (10-15 new cases per 100,000) and yellow (1-10) can partly reopen. In the orange risk level, grades pre-K-8 should be given priority for in-person learning if certain conditions are met, while high schools should maintain remote learning. In the yellow risk level, high schools should open with a hybrid schedule if resources are available after the reopening of elementary and middle schools.

Without a vaccine and a near-zero level of new COVID-19 cases, “the second-best policy, and path we should pursue, is to re-open in-person grades K-5 (first priority) and grades 6-8 (second priority) in lower risk level jurisdictions, provided there is a sufficient supply of pandemic-resilient teaching and learning spaces in the district to do so equitably,” the report says.

The full report can be found at https://globalepidemics.org/wp-content/uploads/2020/07/pandemic_resilient_schools_briefing_72020.pdf.

A fifth resident at a Bristol, Tennessee, nursing home has died after contracting the novel coronavirus, according to a statement from the facility on Tuesday.

In total, 110 residents and staff members at Christian Care Center of Bristol have tested positive for COVID-19 since the first positive case was reported in a staff member of June 25. The outbreak worsened in early July, with the first two fatalities reported on July 10.

“We are looking forward to more residents and staff members to be recovered soon,” CCCB’s statement said. “Our hearts go out to our dedicated care givers, residents, families, as well as area hospitals and other care providers who are also facing many difficult challenges in dealing with COVID-19 in our area.”

The Veterans Affairs facility at Mountain Home reported one new death on Tuesday, bringing the total number of deaths attributed to the facility to seven.

A new employee fatality was reported in the Tennessee Valley, but that includes facilities in Nashville and Murfreesboro, not Mountain Home.

Mountain Home has seen 203 cases overall, with 119 recoveries. There are 77 active cases. Mountain Home is not saying where the deaths or cases are concentrated, citing patient privacy concerns.

According to the Department of Veterans Affairs’ COVID-19 data dashboard, the number of cases includes “all patients tested or treated at a VA facility for known or probable COVID-19.” The same goes for fatalities, which do not have to occur at a VA hospital to count as a VA death.

Drive-up testing in Northeast Tennessee is available for free at the following sites:

The total number of active cases in the state decreased for the second-straight day on Tuesday, as it appears the state has hit a plateau in active cases — holding steady between 37,000-40,000 active cases since July 26.

Hospitalizations appeared to have been slowing after a record week last week, but jumped up to 92 new on Tuesday. As a result, hospital capacity dipped slightly, down to 21% of available floor beds and 67% of ventilators on Tuesday — a 1% decrease from Monday. The number of available ICU beds remained steady at 16%.

As is the case in Northeast Tennessee, testing remains down from last week’s rate, which could explain the drop in new cases. The positive test rate for the state was 9.9%.

This chart shows the number of active cases by county in Northeast Tennessee.

This chart shows the number of new COVID-19 cases reported by county in Northeast Tennessee during that reporting period.

This chart shows the number of total cases and new cases reported among school-aged children (5-18) in Northeast Tennessee by county.

This chart shows the number of active cases, recoveries and total cases by county in Tennessee.

This chart shows the number of new hospitalizations reported by week and month.

This chart shows Northeast Tennessee's COVID-19 curve since March 20 -- the first day the region reported more than one case. The blue line …

This chart shows the number of new cases reported per day in Tennessee since the first case was reported in early March. The blue line shows…

All four Northeast Tennessee counties with expiring mask mandates have issued extensions, with cases up more than 450% in the region since the…