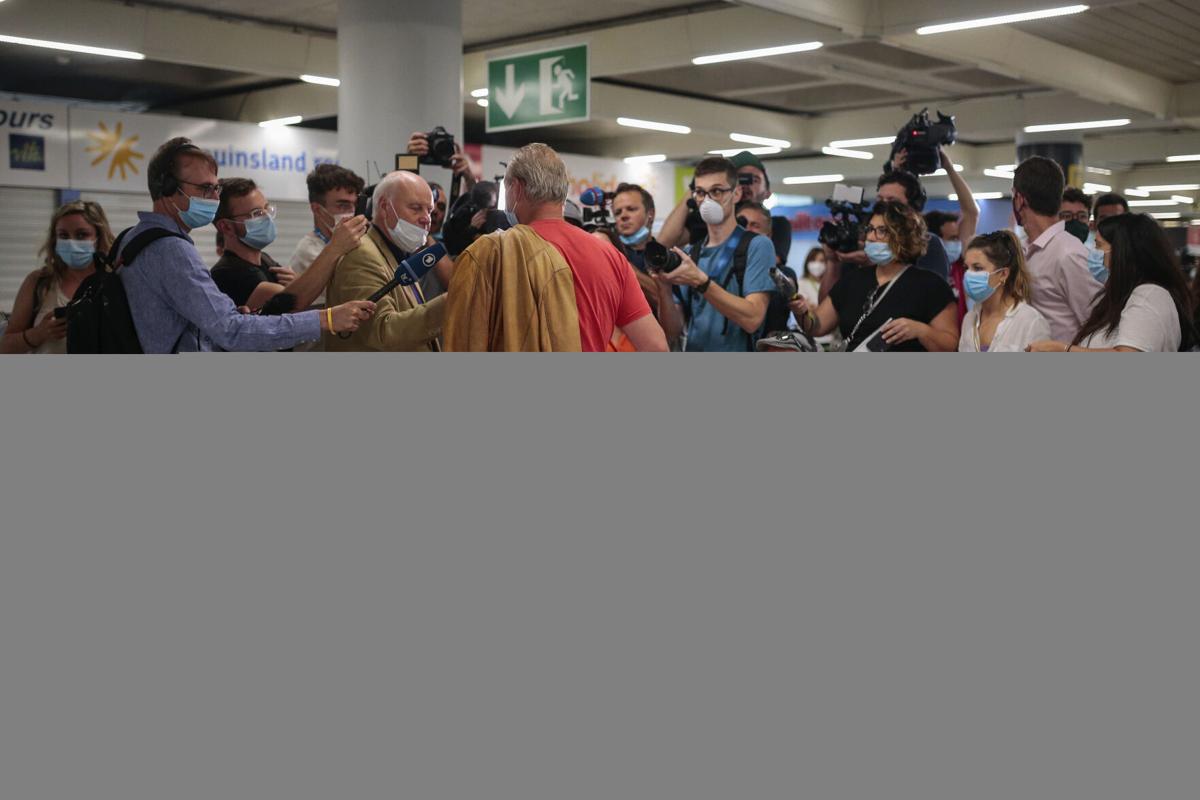 A TUI X3 2312 Duesseldorf-Mallorca flight passenger talks to the press at Son Sant Joan airport in Palma de Mallorca, Spain, Monday, June 15, 2020. Whether its German holidaymakers basking in Spain's sunshine or Parisians renewing their love affair with their city, Monday's border openings and further scrapping of restrictions offered Europeans a taste of pre-coronavirus life that they may have taken for granted. (AP Photo/Joan Mateu) 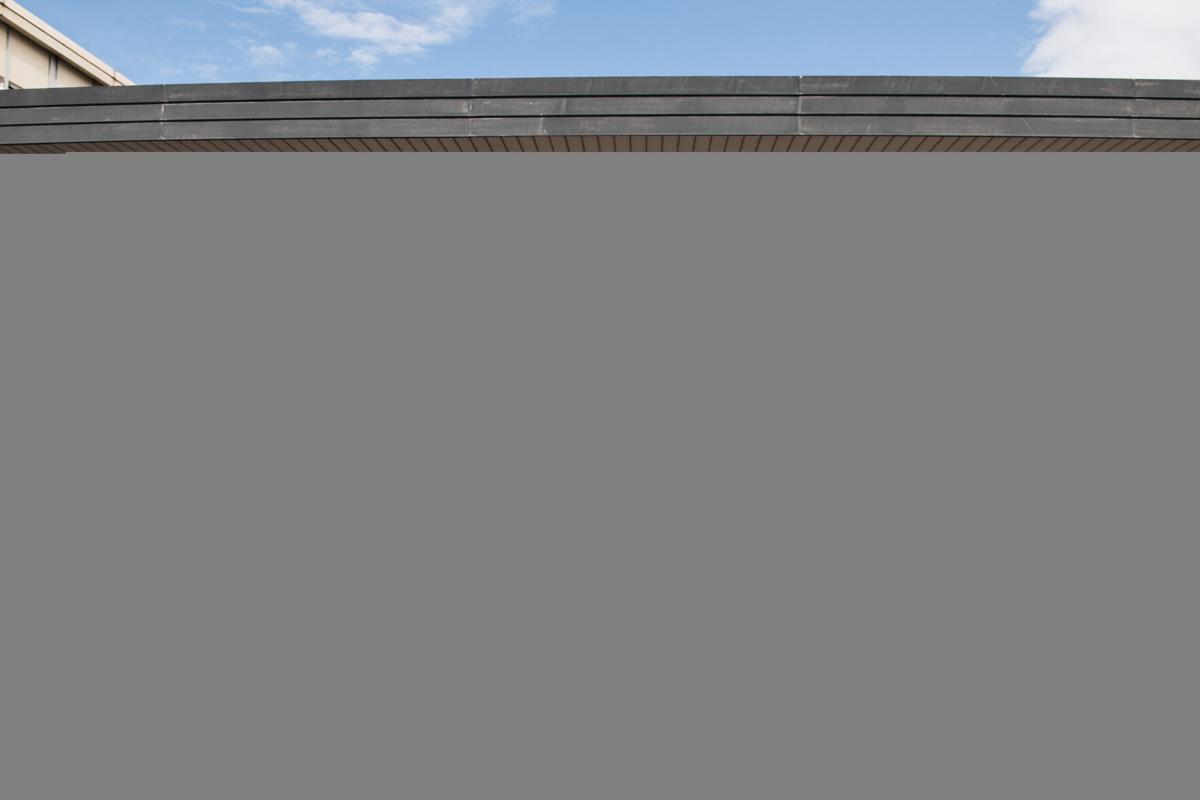 A TUI X3 2312 Duesseldorf-Mallorca flight passenger talks to the press at Son Sant Joan airport in Palma de Mallorca, Spain, Monday, June 15, 2020. Whether its German holidaymakers basking in Spain's sunshine or Parisians renewing their love affair with their city, Monday's border openings and further scrapping of restrictions offered Europeans a taste of pre-coronavirus life that they may have taken for granted. (AP Photo/Joan Mateu)

BRUSSELS (AP) — Americans are unlikely to be allowed into more than 30 European countries for business or tourism when the continent begins next week to open its borders to the world, due to the spread of the coronavirus and President Donald Trump’s ban on European visitors.

More than 15 million Americans are estimated to travel to Europe each year, and such a decision would underscore flaws in the Trump administration’s handling of the pandemic, which has seen the United States record the highest number of infections and virus-related deaths in the world by far.

European nations appear on track to reopen their borders between each other by July 1. Their representatives in Brussels have been debating what virus-related criteria should apply when lifting border restrictions to the outside world, which were imposed in March to stop all non-essential travel to Europe.

In recommendations to EU nations on June 11, the European Commission said “travel restrictions should not be lifted as regards third countries where the situation is worse” than the average in the 27 EU member countries plus Iceland, Liechtenstein, Norway and Switzerland.

That is likely to rule out people living in the United States, where new coronavirus infections have surged to the highest level in two months, according to figures compiled by Johns Hopkins University. After trending down for well over a month, new U.S. cases have risen for more than a week.

The U.S. on Tuesday reported 34,700 new cases of the virus, bringing its total to more than 2.3 million cases and over 121,000 dead. The virus outbreaks in Brazil, India and Russia are remarkably high too, and it’s also unlikely that the EU will let their citizens in.

In contrast, aside from a notable new outbreak tied to a slaughterhouse in western Germany, the virus’s spread has slowed across the EU and particularly in the 26 nations that make up Europe’s visa-free travel zone known as the Schengen area.

For the EU’s executive arm, the key criteria for opening up to the outside world should include the number of new infections per 100,000 population — the exact ceiling is up for debate — and the country’s overall response to the pandemic, in terms of testing, surveillance, treatment, contact tracing and reporting cases.

EU envoys are trying to agree on objective, scientific criteria so the decision to put a country on the admission list or not is based on facts and not political considerations. Southern European countries like Spain, Italy and Greece are desperate for tourists to return and breathe new life into their virus-ravaged economies.

The bloc aims to revise the list of countries allowed to enter every two weeks based on developments, with new countries joining or possibly even denied access to Europe depending on the spread of the disease. The commission hopes that exemptions can be given to foreign students, non-EU citizens who live in Europe and certain highly skilled workers.

But more than epidemiological criteria, any country being considered would first be expected to lift its own travel restrictions for people from all EU and Schengen nations, the commission said, adding “it cannot be applied selectively.”

Brussels fears that opening up to countries outside in ad hoc way could lead to the reintroduction of border controls between nations inside the Schengen area, threatening once again Europe’s cherished principle of free movement, which allows people and goods to cross borders without checks.

This principle of reciprocity on its own should rule out U.S. citizens, at least initially.

In a March 11 decree, Trump suspended the entry of all people from the Schengen area. More than 10 million Europeans usually visit the United States each year.

“The potential for undetected transmission of the virus by infected individuals seeking to enter the United States from the Schengen area threatens the security of our transportation system and infrastructure and the national security,” Trump’s proclamation said.

A top French diplomat, speaking anonymously in line with the French presidency’s customary practices, stressed that the EU decision will not be a political one.

“It will be made on a basis as objective as possible which is the spreading of the virus,” the diplomat said.

The official also stressed that Trump “has taken very early measures consisting in preventing people coming from China, then EU countries, from entering the U.S.”

The EU commission also wants the bloc to be open as soon as possible after July 1 to the Balkans region, including citizens from Albania, Bosnia, Kosovo, Montenegro, North Macedonia and Serbia.

AP Writer Sylvie Corbet in Paris contributed to the story.