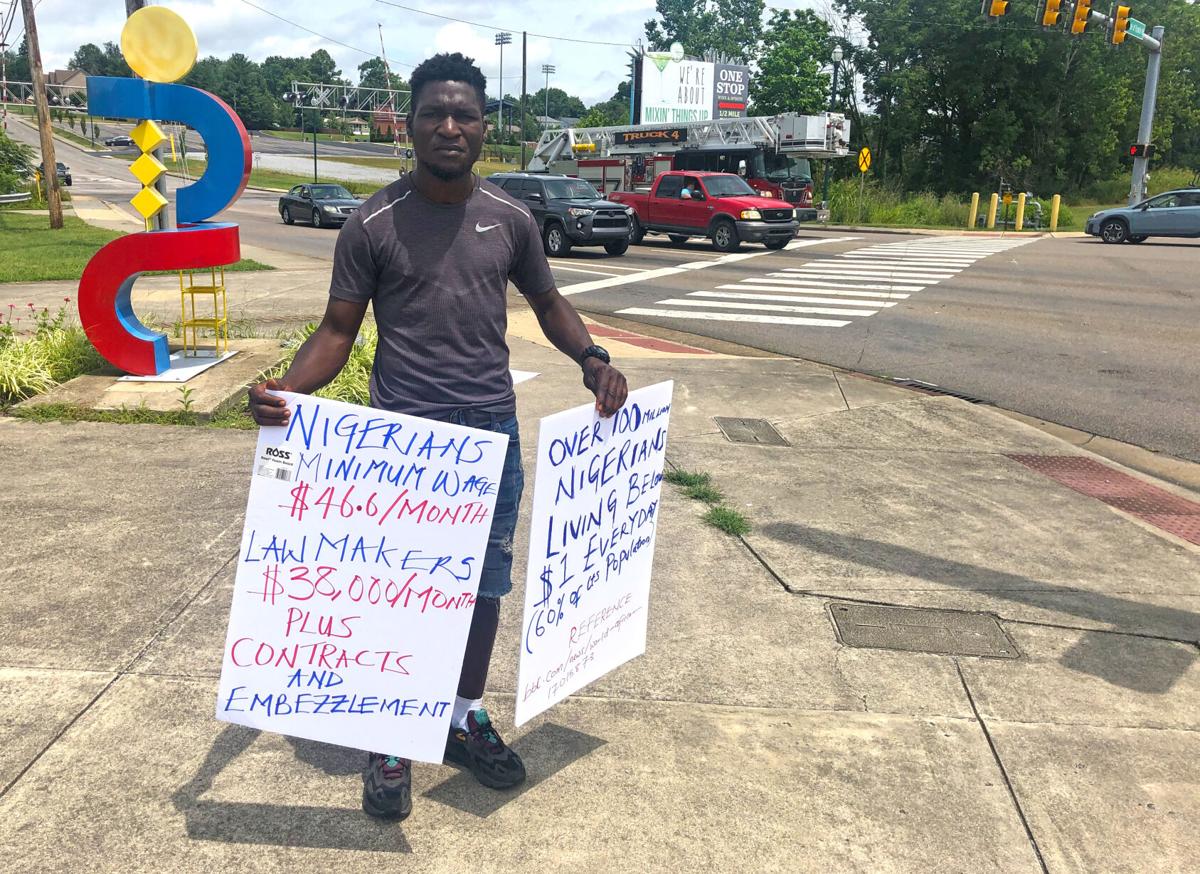 Nigerian citizen Stephen Aguda displays signs about the crisis in his country to passing cars at University Parkway and State of Franklin Road on Friday, July 24, 2020. Stephen studies at Walters State Community College and resides in Kingsport. 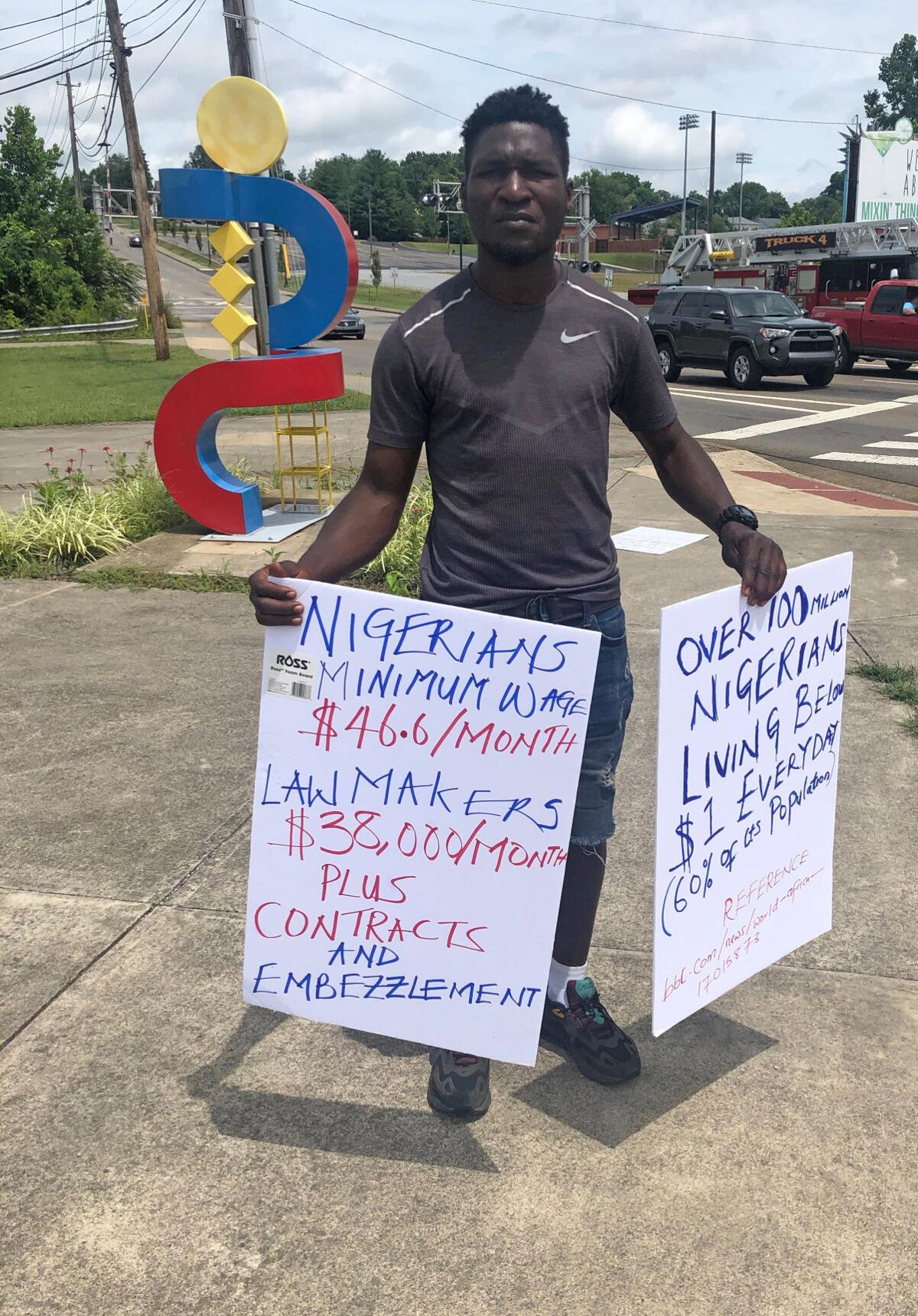 Nigerian citizen Stephen Aguda displays signs about the crisis in his country to passing cars at University Parkway and State of Franklin Road on Friday.

Nigerian citizen Stephen Aguda displays signs about the crisis in his country to passing cars at University Parkway and State of Franklin Road on Friday, July 24, 2020. Stephen studies at Walters State Community College and resides in Kingsport.

Nigerian citizen Stephen Aguda displays signs about the crisis in his country to passing cars at University Parkway and State of Franklin Road on Friday.

Nigerian citizen Stephen Aguda wants the world to know about the poverty and corruption facing his native country.

The 27-year-old Walters State Community College student has been in the United States about a year and sees the vast difference in the way of life for the majority of people here. He came to Johnson City from his home in Kingsport at lunch hour Friday to spread his message by displaying signs at one of the region’s busiest intersections, University Parkway and West State of Franklin Road.

“It’s government corruption and embezzlement,” he said, pointing to a sign citing examples. “The world needs to know what is happening. Nigeria is the fourth (leading) oil-producing country in the world, yet over 100 million people are living below $1 per day.”

Aguda’s figures indicated that the minimum wage in his country of nearly 200 million people equated to about $46.60 per month. According to news reports from the country, the minimum wage was raised to N30,000 per month — the equivalent of about $77.42 in U.S. money. The nation’s unemployment rate is approaching 33.5% with the novel coronavirus pandemic expected to push another 5 million to 7 million people into poverty this year, according to World Bank estimates. Food prices have risen 15%.

Meanwhile, Aguda said, lawmakers are paid thousands while also embezzling and receiving bribes and kickbacks from corporations. The Guardian and other international news organizations have reported such events, including a current case in Italian courts involving $1.3 billion in bribes between oil corporations and Nigerian businessmen — the most recent example on Aguda’s list.

The African country’s people have also suffered through more than a decade of abductions and killings by Islamist militants. Just this week, the United Nations reported the Boko Haram organization had killed five hostages, including four aid workers, who were abducted from northeastern Nigeria in June.

Before coming to the U.S. to study, Aguda was a graphic designer in Nigeria, so he lived a better life than most of his fellow citizens.

“But coming here, I see how good this country is.”

Aguda said he hoped the U.S. would use its international standing and power to effect change in Nigeria.

The United States Agency for International Development reports that while Nigeria is the one of the largest economies in sub-Saharan Africa, it must overcome significant development and governance challenges.

“Per the United Nations, the country has one of the world’s lowest per capita social spending levels resulting in 65 percent of the 186 million citizens living in extreme poverty,” the Nigerian section of the agency’s website states. “These conditions breed disaffection in youth, provide an entry point for Islamic extremism, entice corruption, and promote ineffective governance. Northeast Nigeria has become one of the world’s most complex humanitarian crises due to the Boko Haram insurgency and extremely low levels of development in the region.”

The USAID states that it seeks to improve stability in Nigeria through improved social services, transparent and responsive governance, a market-led economy and humanitarian assistance.

In fiscal year 2019, the U.S. provided an estimated $726 million in health and humanitarian aid to Nigeria, according to the USAID.