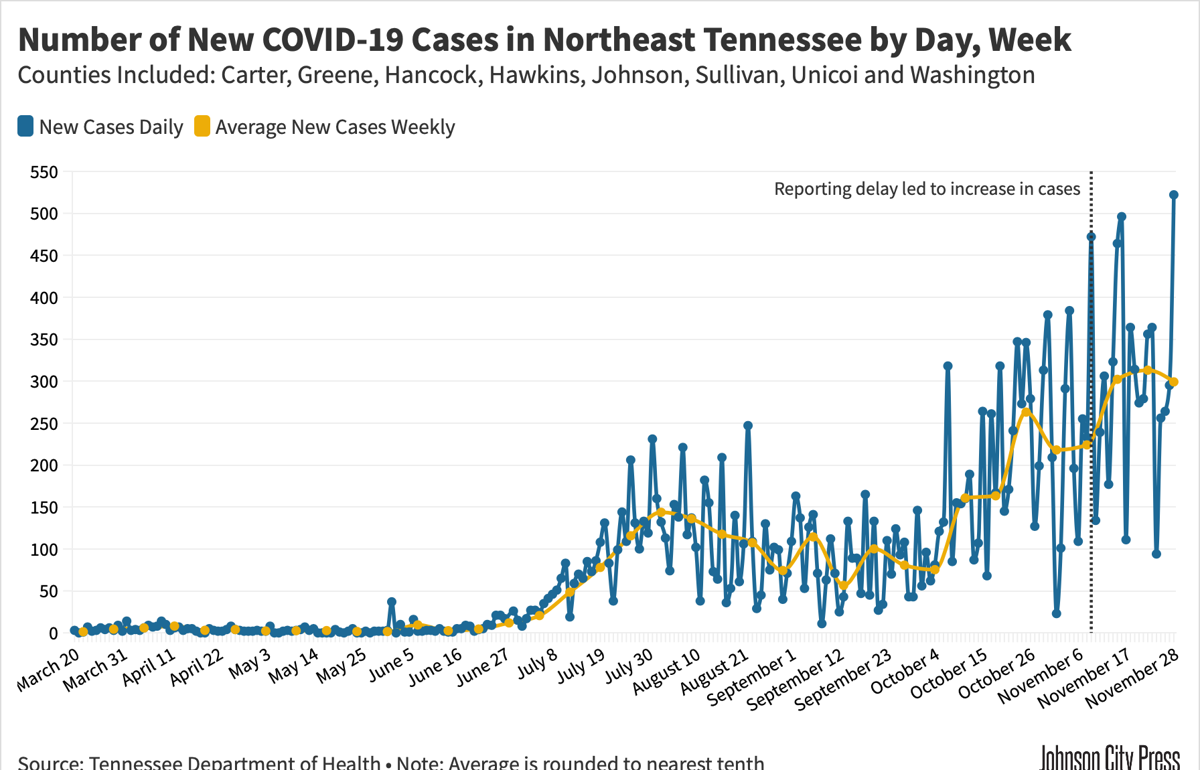 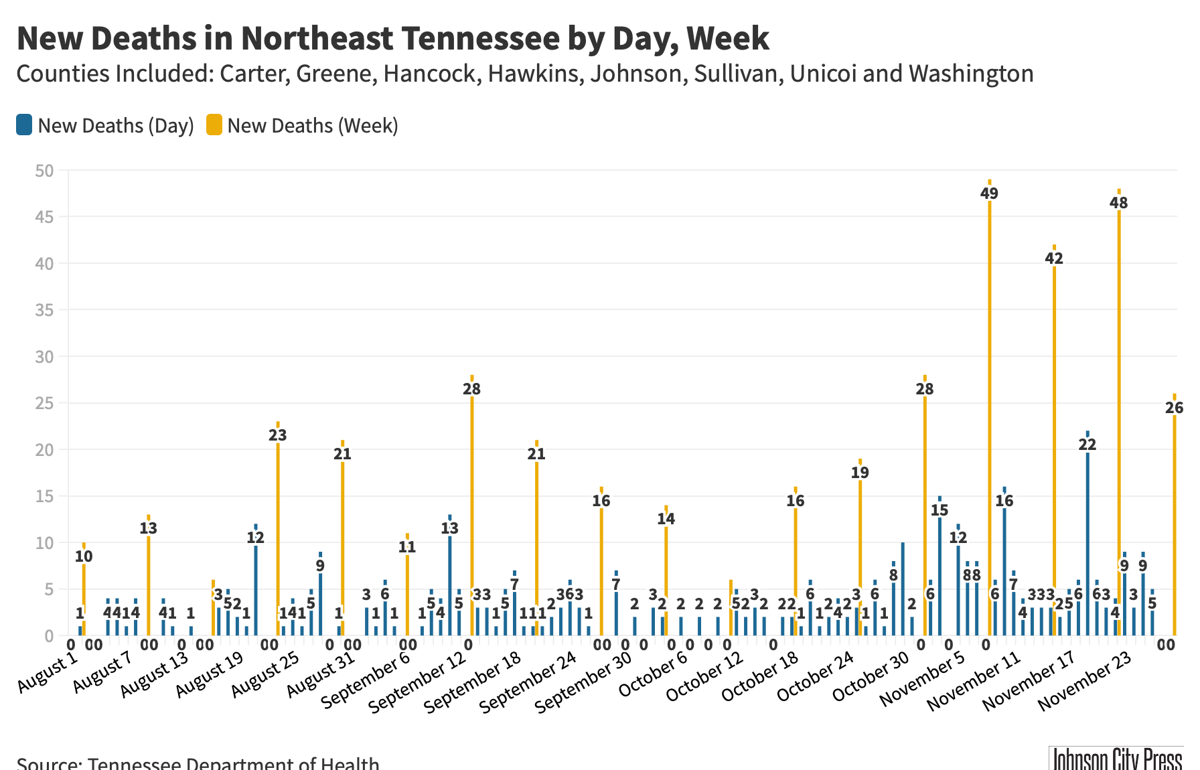 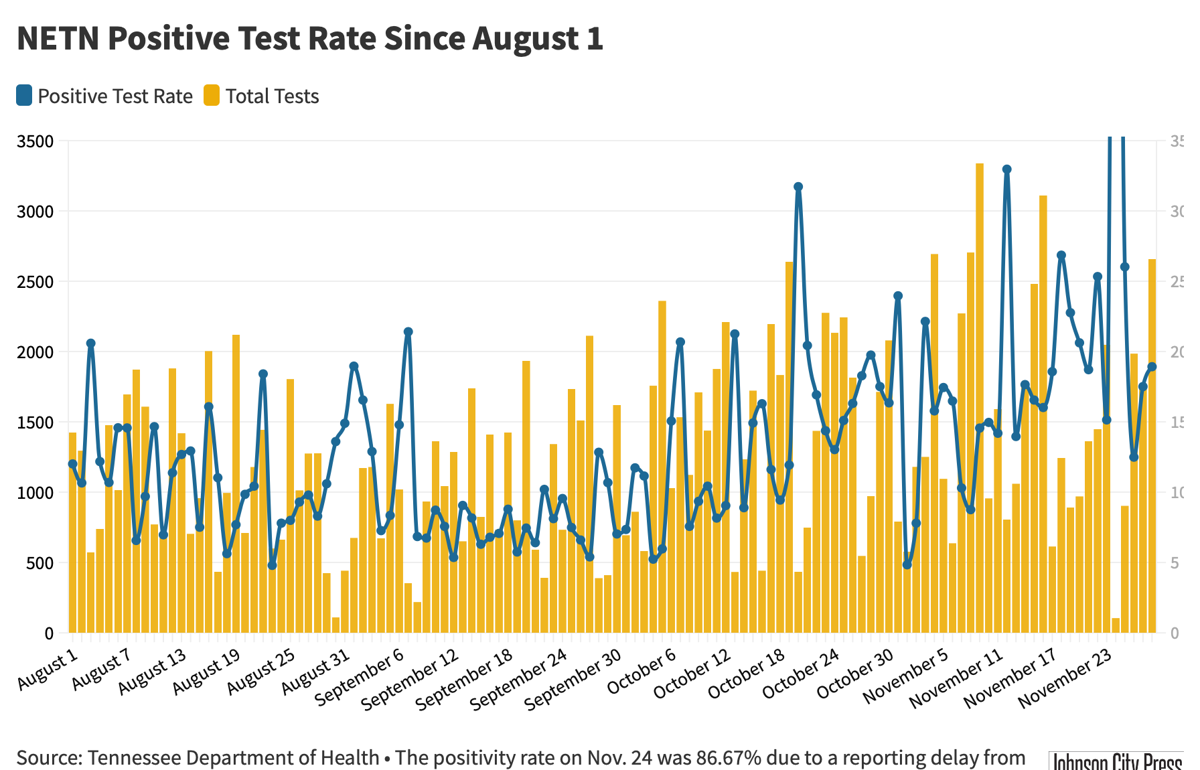 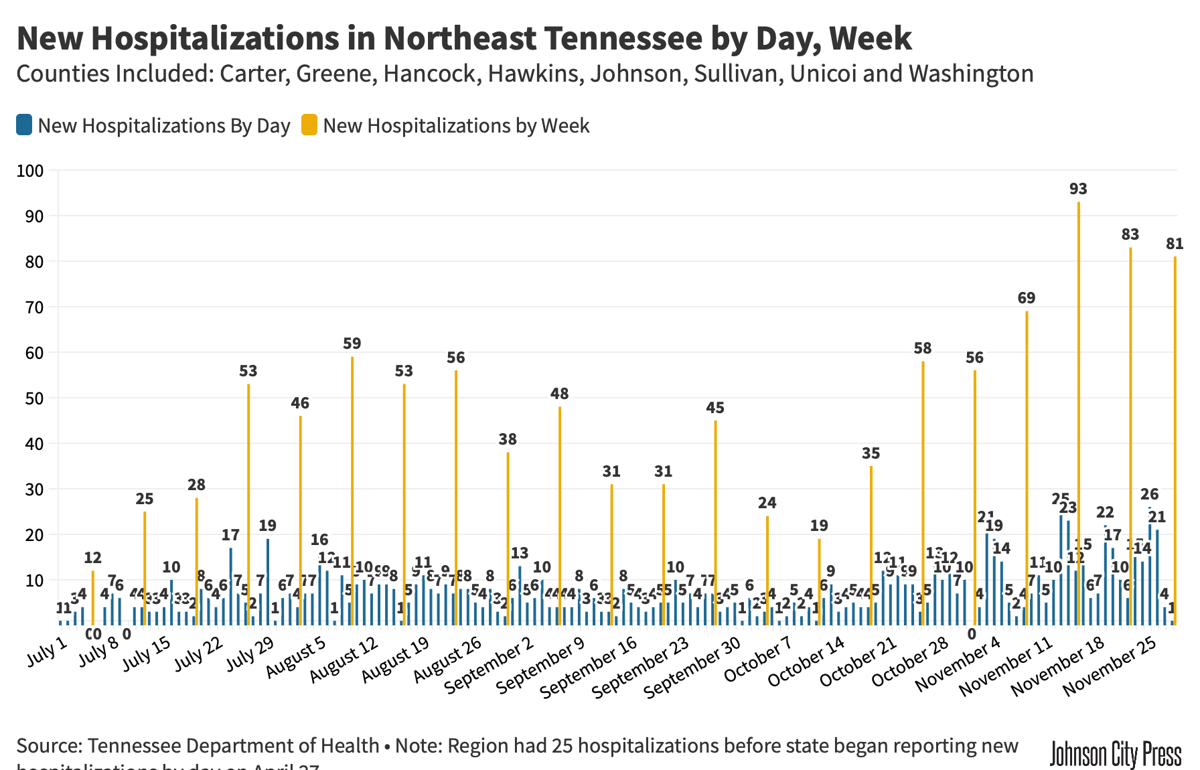 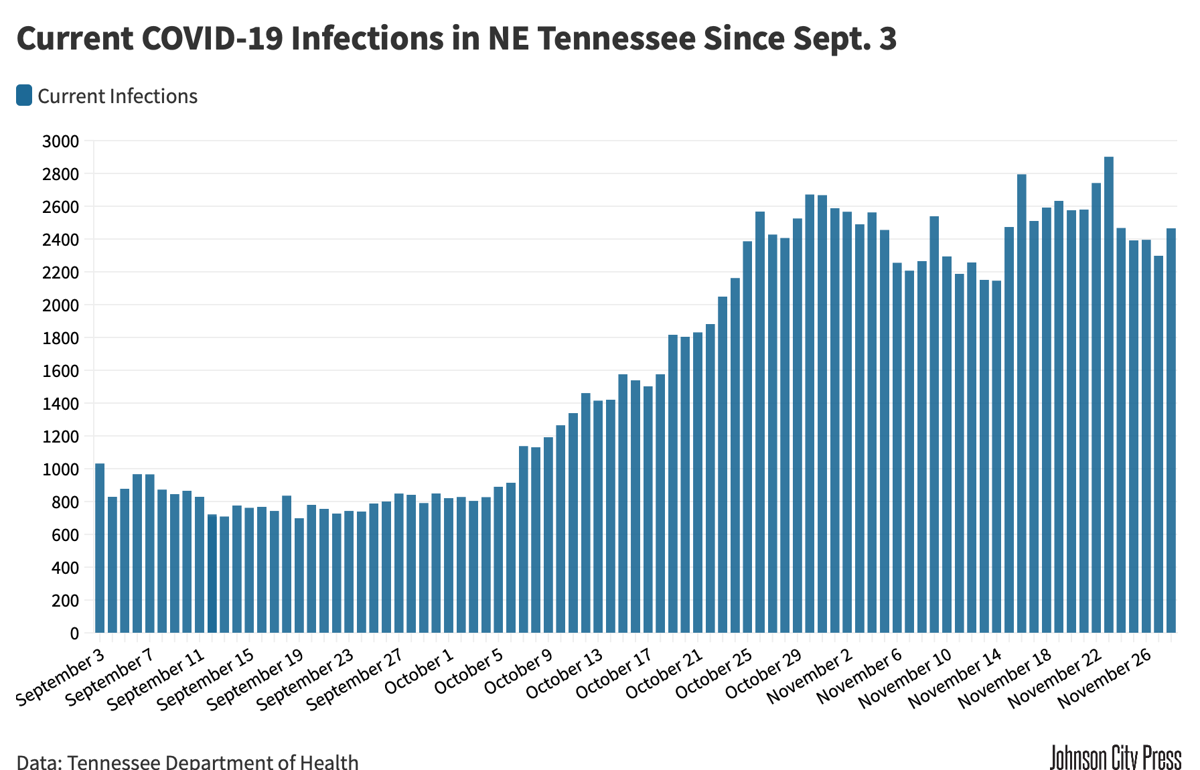 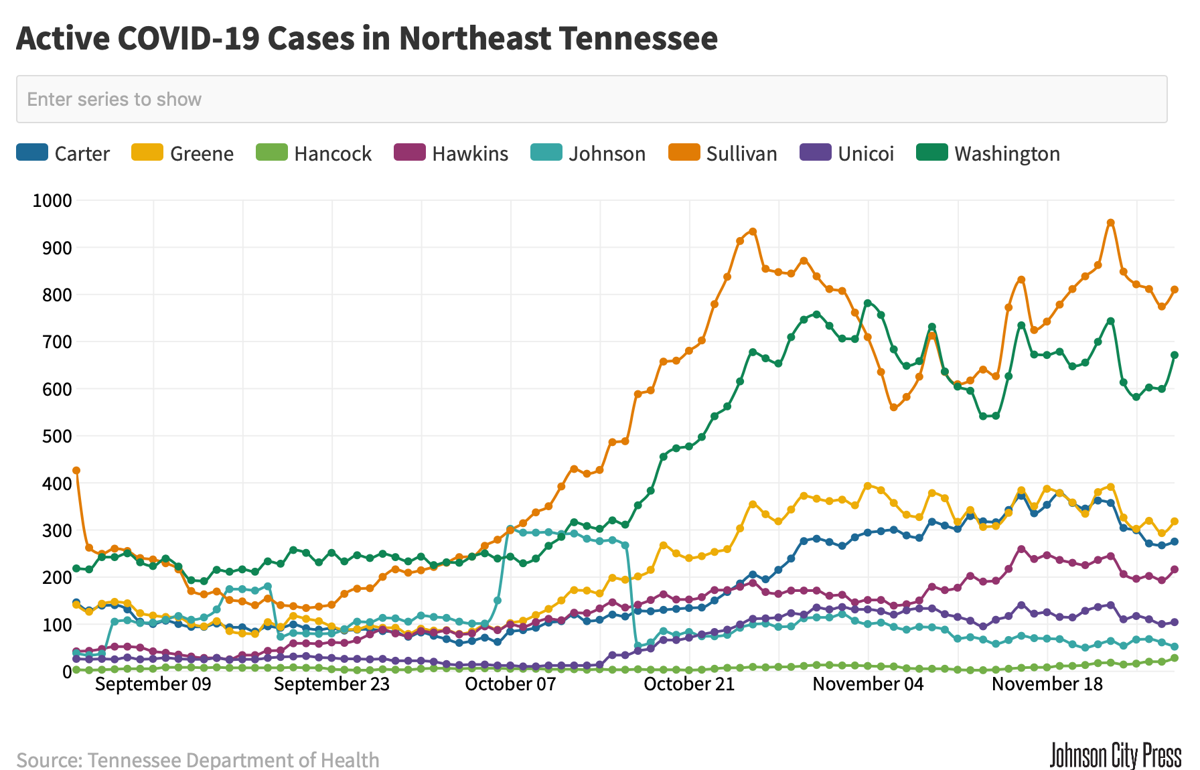 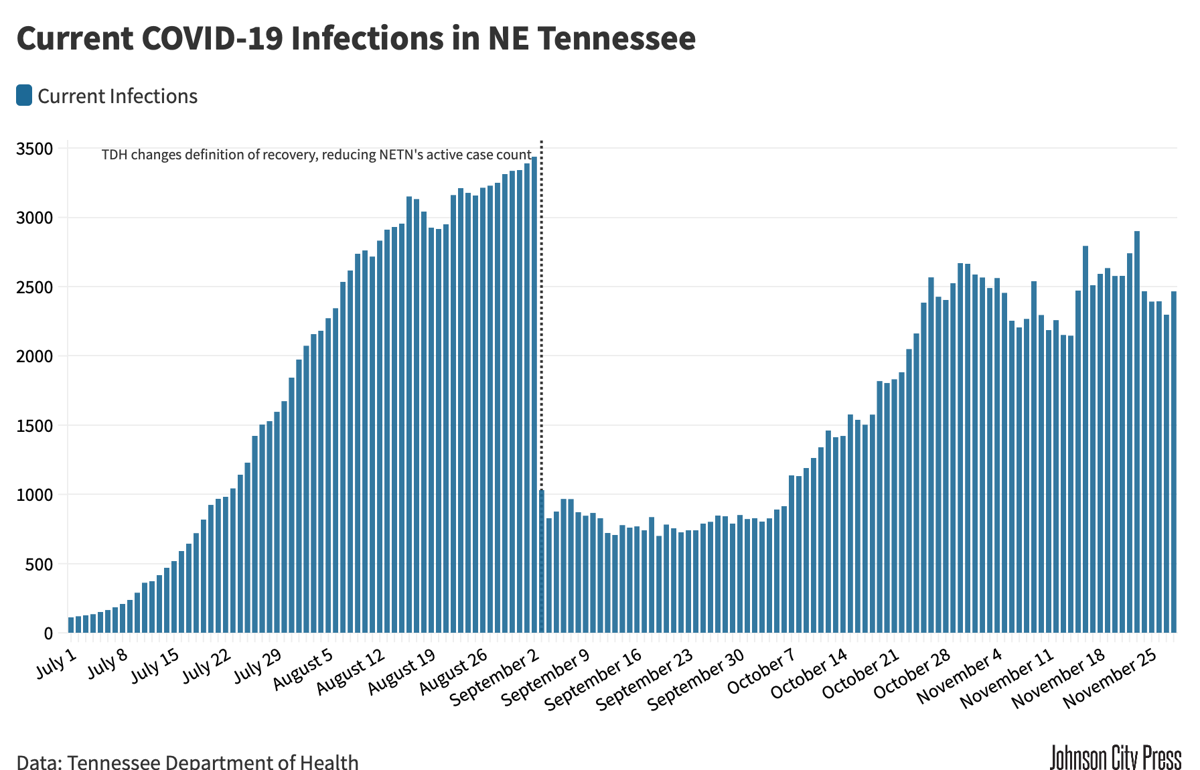 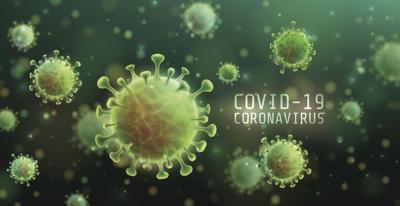 Northeast Tennessee reported a record number of new novel coronavirus (COVID-19) infections on Saturday, crossing the 500-mark for the first time and topping the previous record of 496 reported on Nov. 16.

No new deaths were reported for the second straight day, however, a streak that hasn't been seen since late September.

Northeast Tennessee reported a record number of new COVID-19 cases on Saturday, with Hancock and Washington counties each reporting record numbers of new infections. Overall, 522 new cases were reported across the region. Washington County reported the most with 156, with Sullivan's 139 close behind. Carter (+64), Greene (+76) and Hawkins (+51) counties each reported more than 50 new cases.

There were 2,658 new tests reported on Saturday, most since Nov. 16. Of those tests, nearly 19% (18.92%) came back positive. The region's positivity rate hasn't dipped below 10% in nearly three weeks. Johnson County (6.78% positivity) was the only county below 15% on Saturday, with Hancock County's rate of 26.32% leading the region. Washington County reported the most new tests with 918, and had the third-lowest positivity rate at 17.32%.

Ballad Health reported a slight increase in it's COVID-19 hospitalizations on Saturday with 240, up one from Saturday. Of those hospitalized, 47 (+0) were in intensive care and 28 (-1) were on ventilators. Four others were awaiting test results.

There was only one new hospitalization reported on Saturday in Washington County.

Tennessee reported its second most new cases on Saturday with 6,750, the fifth time the state has reported more than 5,000 new cases — all of which have been reported this month.

The state's hospitalizations rose sharply on Saturday, increasing by 91 to a record number of 2,233. Of those hospitalized, 595 were in the ICU and 280 were on ventilators. Both of which were records.