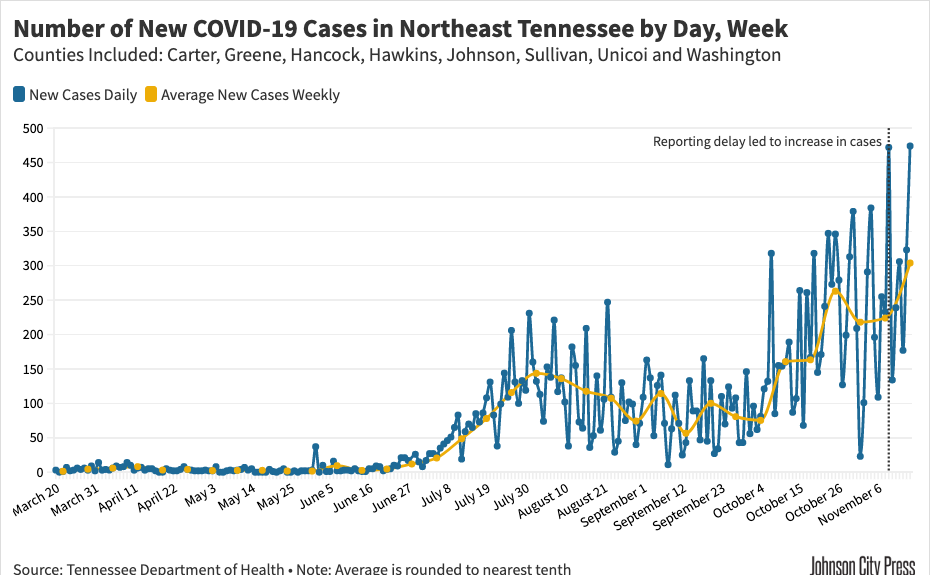 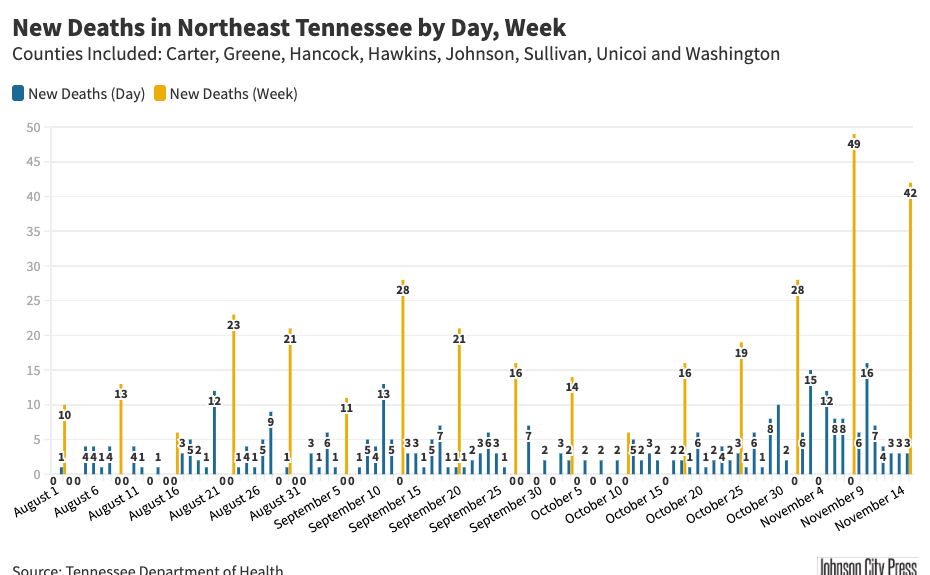 Deaths in NETN Since Aug. 1 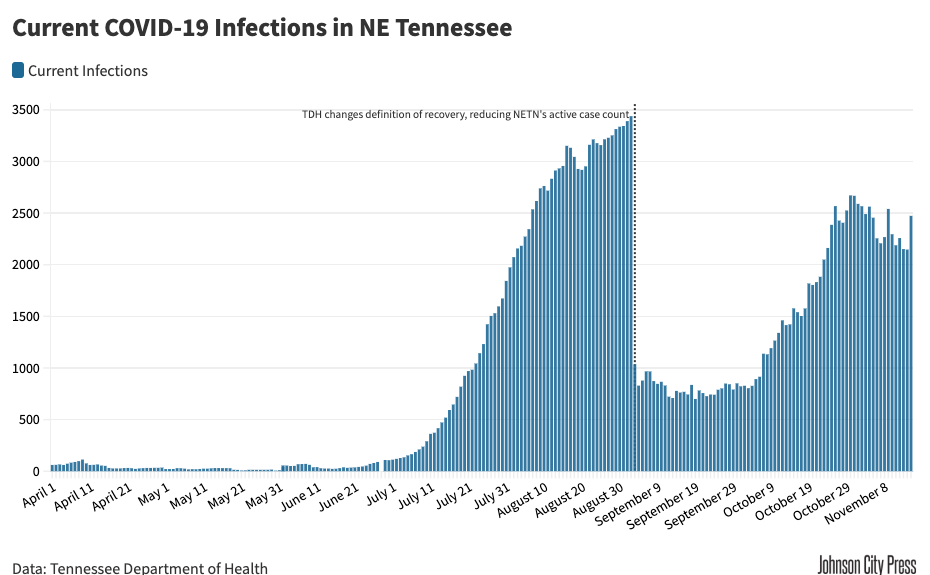 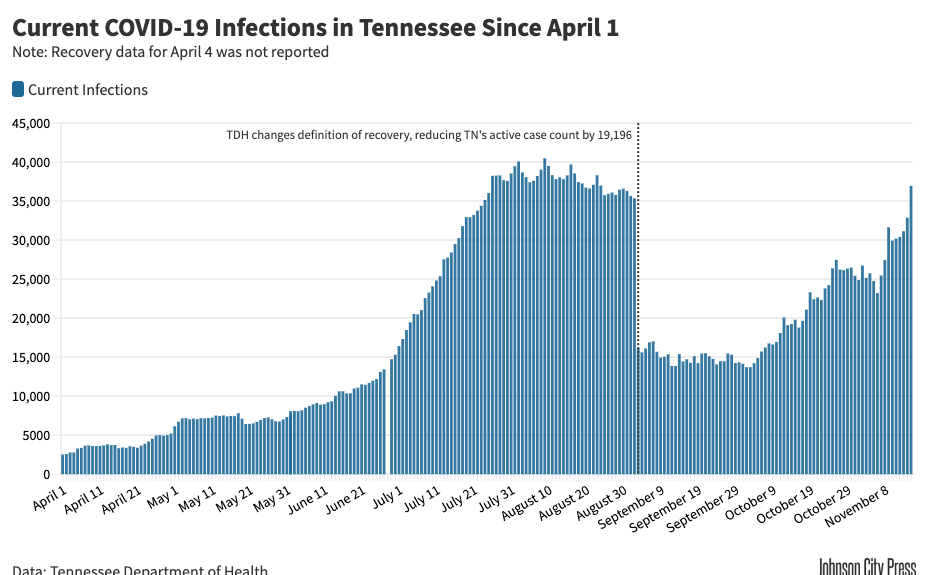 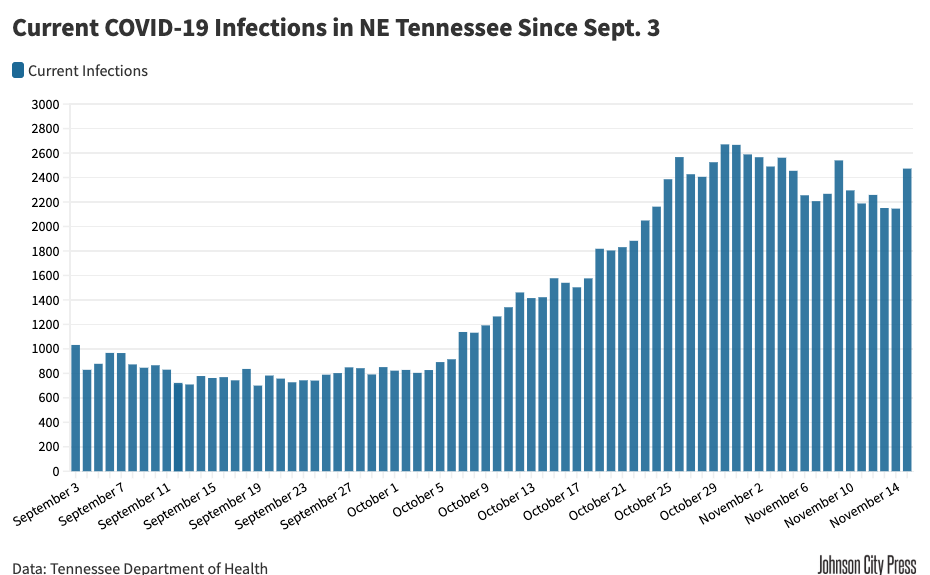 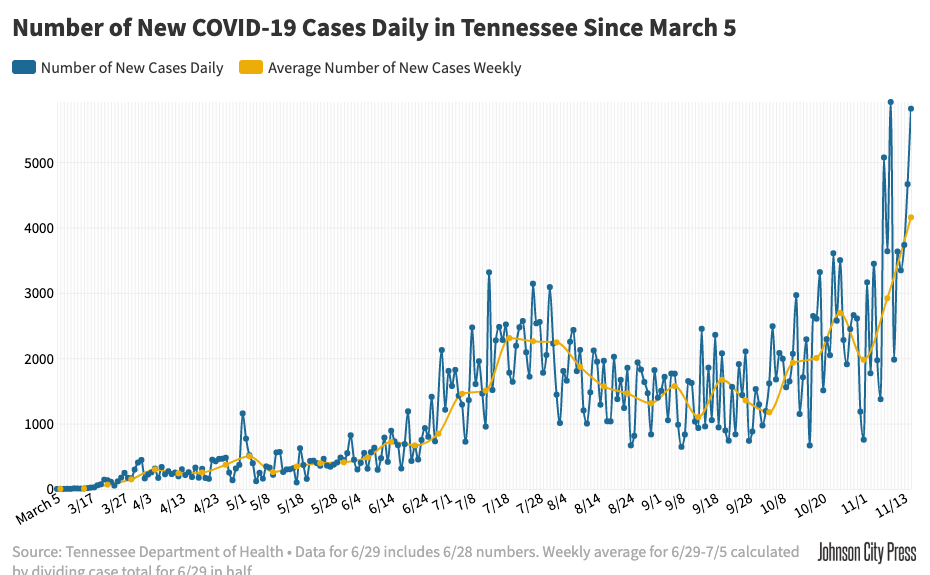 Deaths in NETN Since Aug. 1

Northeast Tennessee reported a near-high 464 new cases of the novel coronavirus (COVID-19) on Sunday, capping off a week of record infections across the eight-county region and statewide.

Sunday’s total was second only to the 472 new cases reported Nov. 9. Together those numbers brought the week’s new cases to 2,125 in the region for an average of 304 per day, far exceeding the previous record average (263) set the week ending Oct. 25.

The majority of Northeast Tennessee’s new cases Sunday were reported in the region’s most populous counties — 194 in Sullivan County and 119 in Washington County.

The state reported 29,086 cases over the seven-day period ending Sunday for an average of 4,155 per day. The previous record average was 2,918 set the prior week. For the first 15 days of November, Tennessee had recorded 50,265 new cases or 16.19% of its total since the pandemic began in March.

Tennessee reported 17 new COVID-19-related fatalities on Sunday, including three in Northeast Tennessee — one in Carter County and two in Washington.

That brought the region’s weekly death toll to 42, second only to the 49 recorded the week before. Since Nov. 1, the region had reported 91 fatalities or 19.61% of all virus-related deaths since the first were reported April 1.

Tennessee recorded 299 deaths for the week, 57 more than the prior record set last week.

After 134 cases reached the point considered no longer infectious, the region had 2,473 active cases, 327 more than in Saturday’s report. Tennessee considers cases inactive after 14 days. Active cases represent new cases over the same period minus deaths.

In the period since the state lowered the threshold for inactive cases Sept. 1, Northeast Tennessee’s active case count peaked at 2,671 on Oct. 30.

Statewide, there were 36,953 active cases, an increase of 4,078 from Saturday and the highest level since the Sept. 1 change in calculations.

The region’s positive test rate remained in double digits for the seventh day in a row. The upper eight counties reported a rate of 16.55%, above the statewide rate of 12.37%.

With 12 new hospitalizations reported Sunday, a total of 93 people had been hospitalized over the week in Northeast Tennessee — 24 more than the record set the previous week.

Ballad also reported 55 deaths had occurred in its service area over the past seven days for a total of 559 since the pandemic began, an increase of four from Saturday’s report.