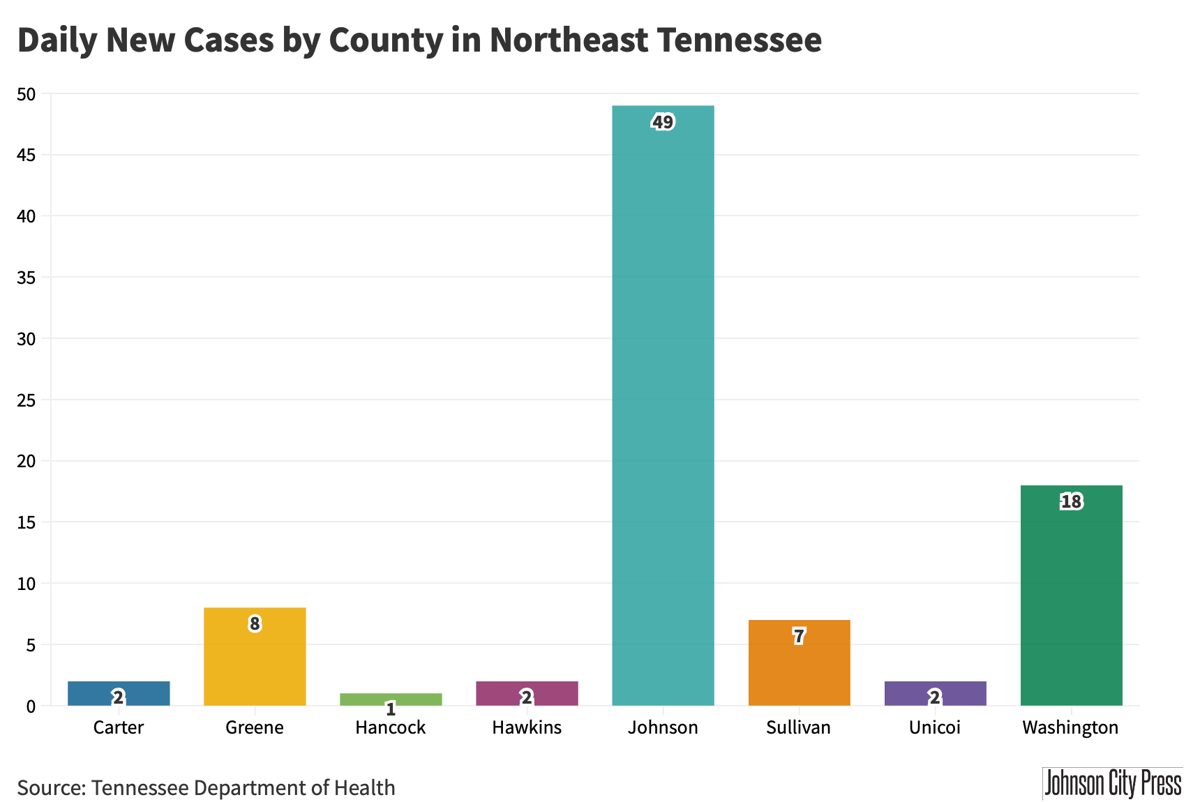 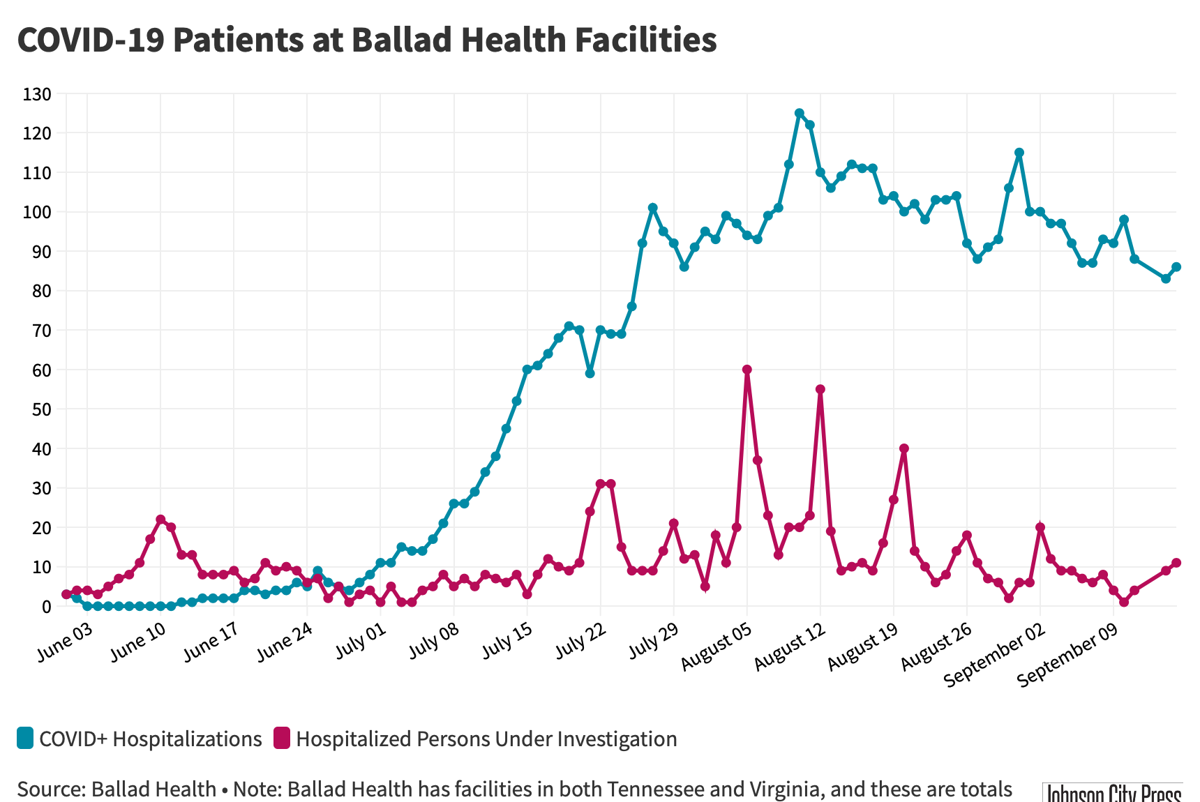 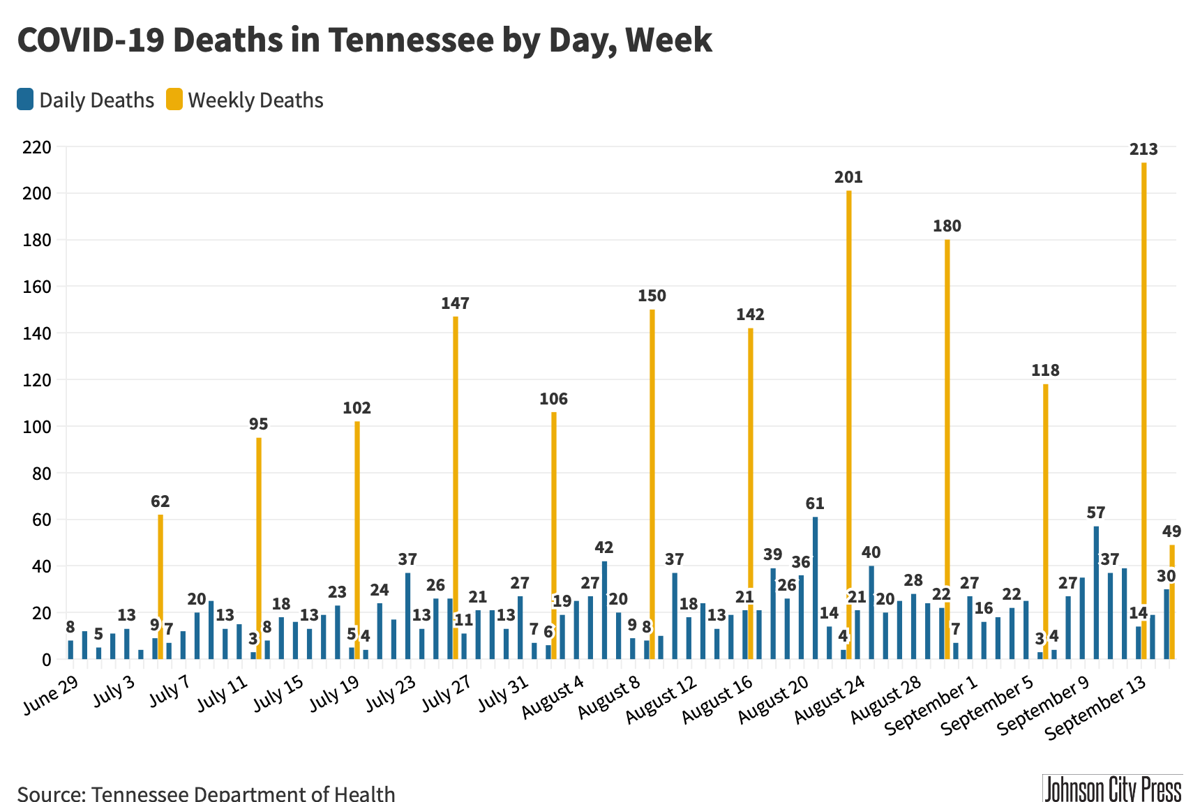 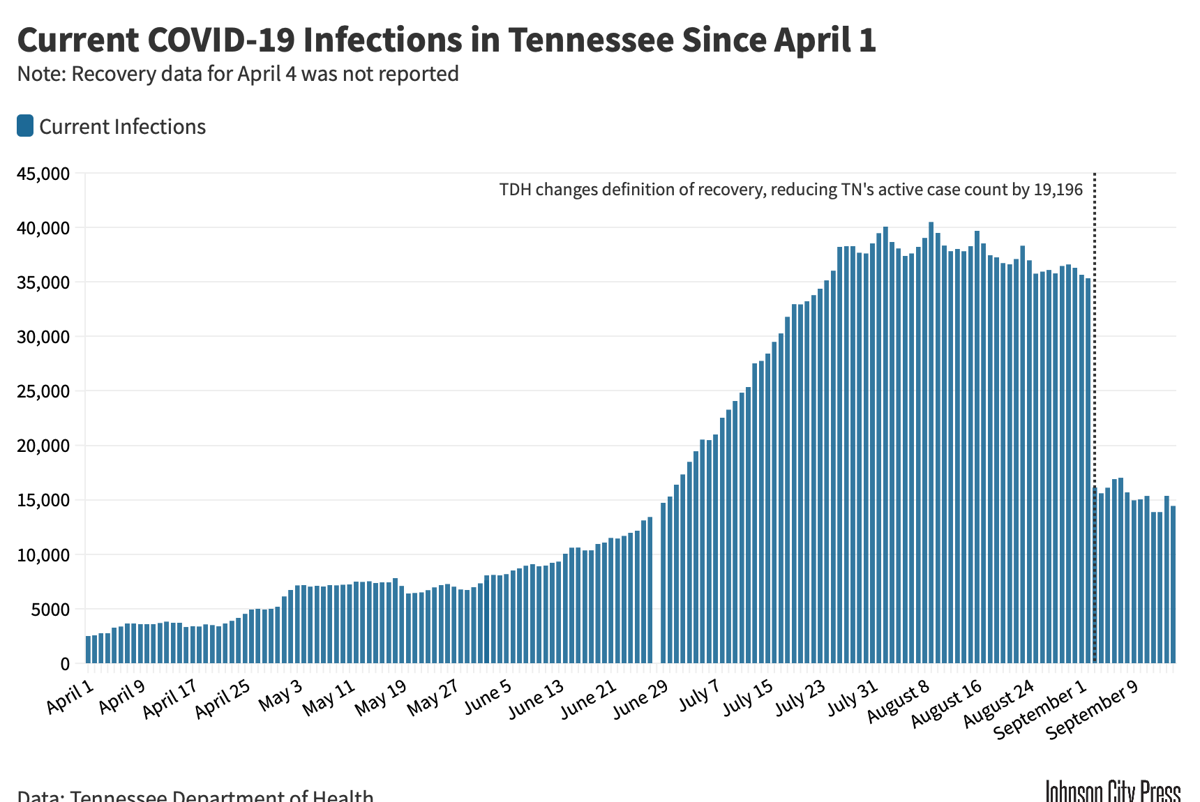 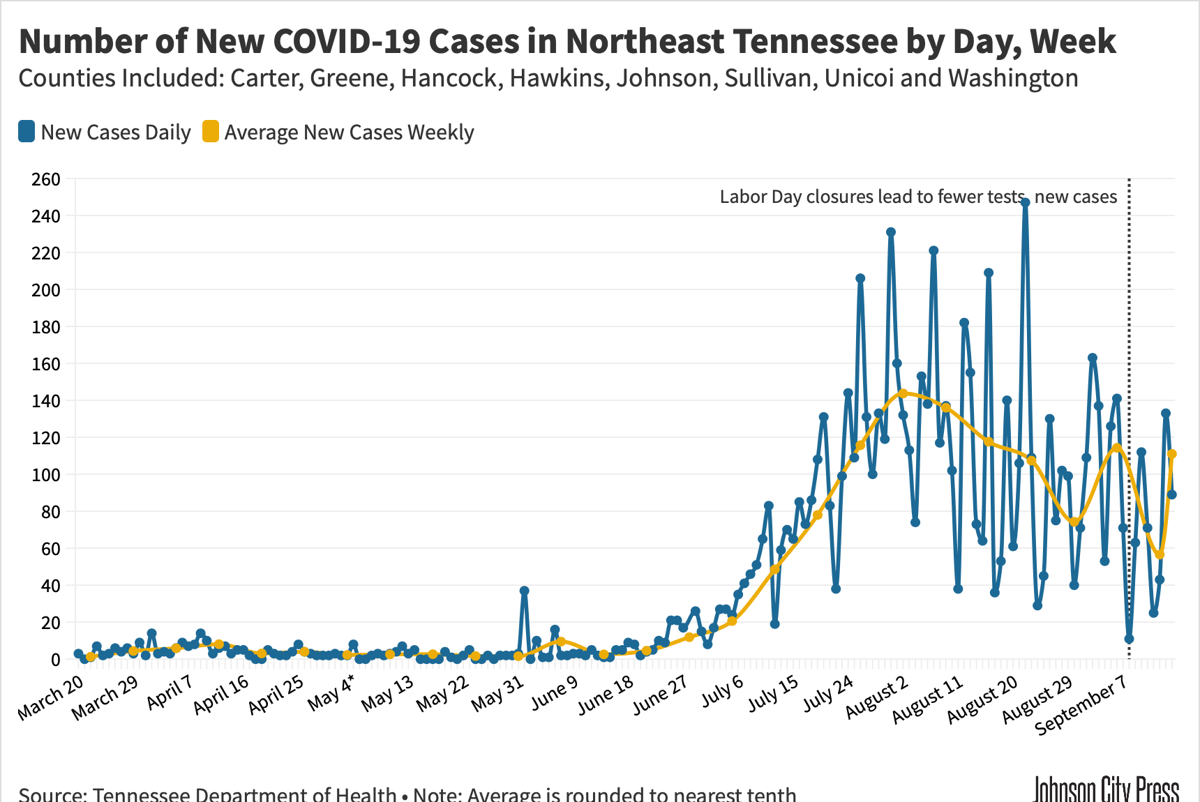 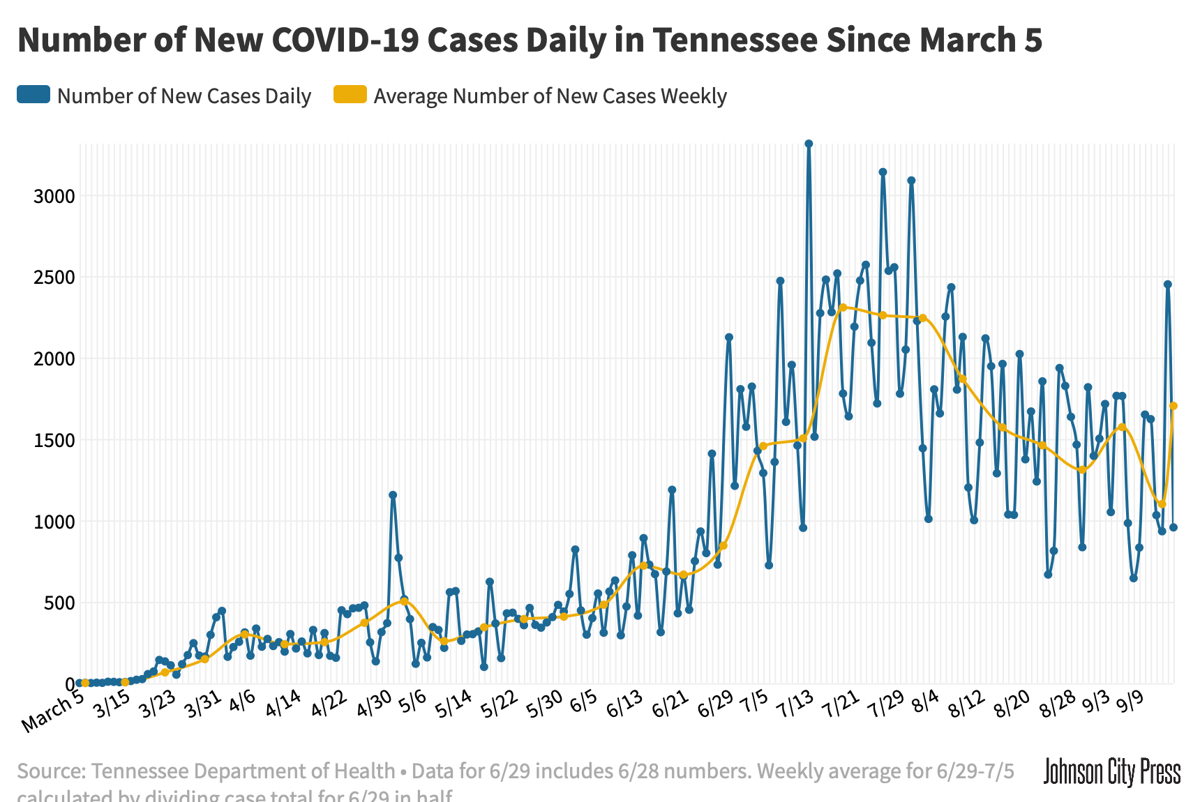 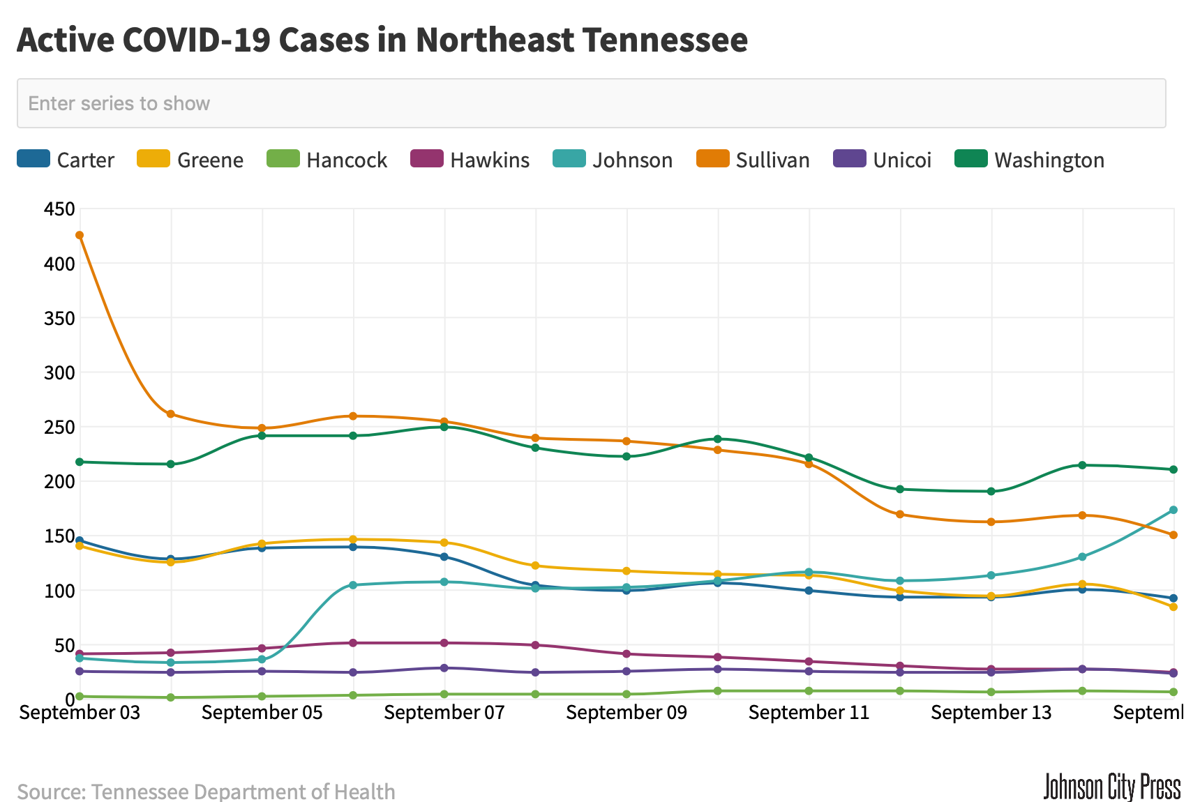 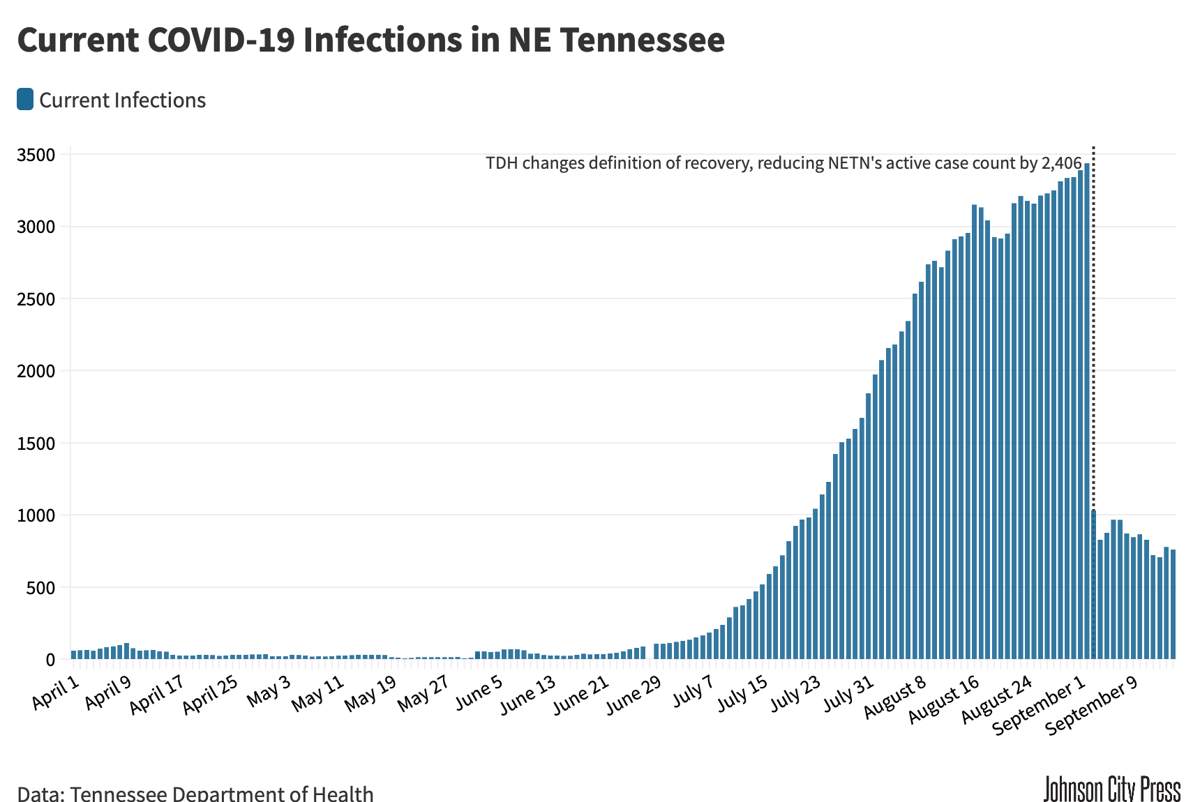 Three more Northeast Tennesseans — two in Greene County and one in Washington County — have died of the novel coronavirus, bringing the region’s death toll to 134.

Northeast Tennessee reported three more COVID-19 deaths on Tuesday, with fatalities reported in Greene and Washington counties — the same as reported on Monday. So far, there have been six virus-related deaths reported this week: Four in Greene County and two in Washington County.

Projected inactive cases, meanwhile, rose by 102, bringing the total to 6,868. About 88% of the region’s cases are estimated to be inactive.

There were 86 COVID-19 hospitalizations across the Ballad Health system Tuesday morning, an increase of three from Monday.

Of those hospitalized, 10 were in intensive care and eight were on ventilators. The 10 ICU patients is the fewest the health system has reported since it began releasing a daily scorecard on Aug. 5.

Since Friday, the number of patients in the ICU has dropped by five, while the number on ventilators is down one, overall. There were 11 people awaiting test results on Tuesday morning.

In the region, there were eight new hospitalizations reported Tuesday: six in Greene County and two in Sullivan County.

The number of Northeast Tennessee’s school-age children diagnosed with COVID-19 increased by four on Tuesday, with Washington County accounting for all the new cases.

Of the 179 cases reported by the university since June 28, 167 are considered inactive. There were 28 people in isolation in on-campus housing as of Monday evening., as well, which could include positive cases, those awaiting test results or people who’ve been exposed to an infected individual.

Last week, ETSU reported 20 new cases, nine of which are considered active. Since classes returned the week of Aug. 23, ETSU has reported 62 cases of COVID-19 — with 50 considered inactive.

ETSU updates its COVID-19 dashboard weekday evenings, and these numbers reflect totals as of Monday evening.

Estimated active cases were steady from Monday, holding at 34.

Washington County: 9 a.m.-2 p.m., 219 Princeton Road, Johnson City, 423-975-2200.This story will be updated with new figures for cases among school-aged children, new hospitalizations and the region’s positive test rate. • The state’s data sets were delayed Tuesday afternoon. due to a technical issue.