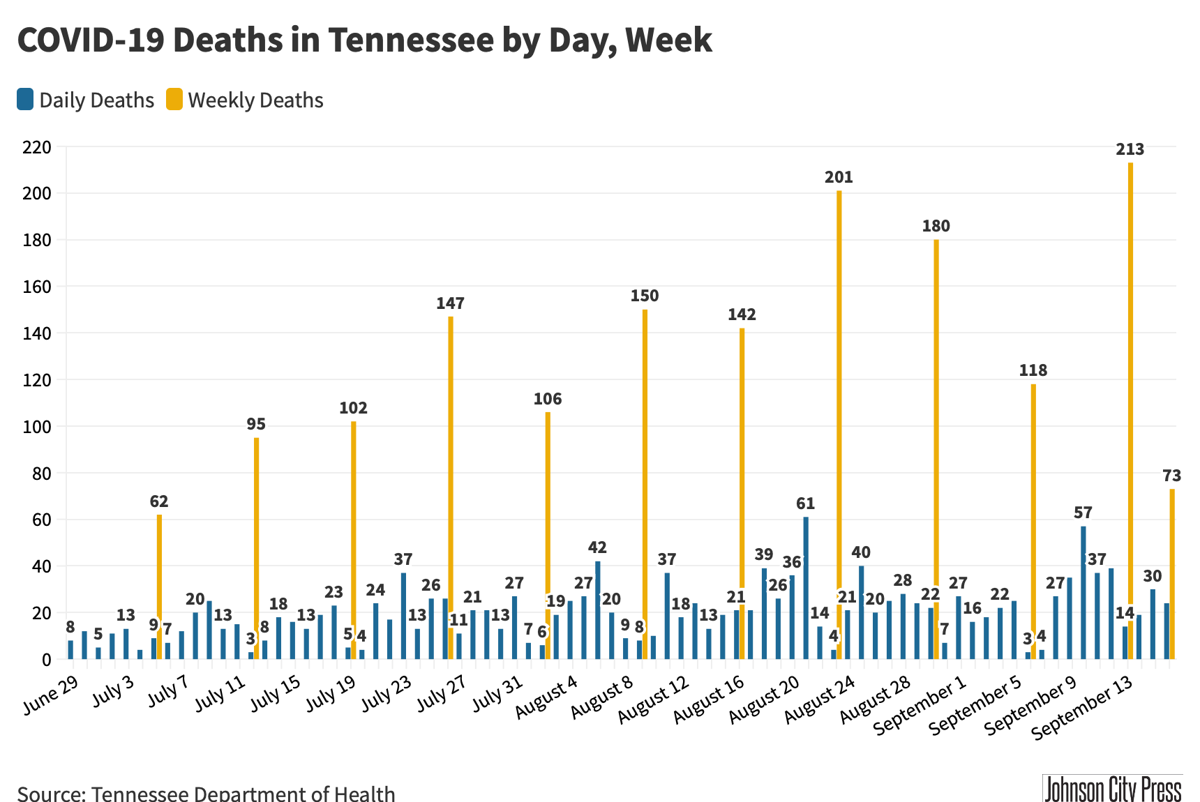 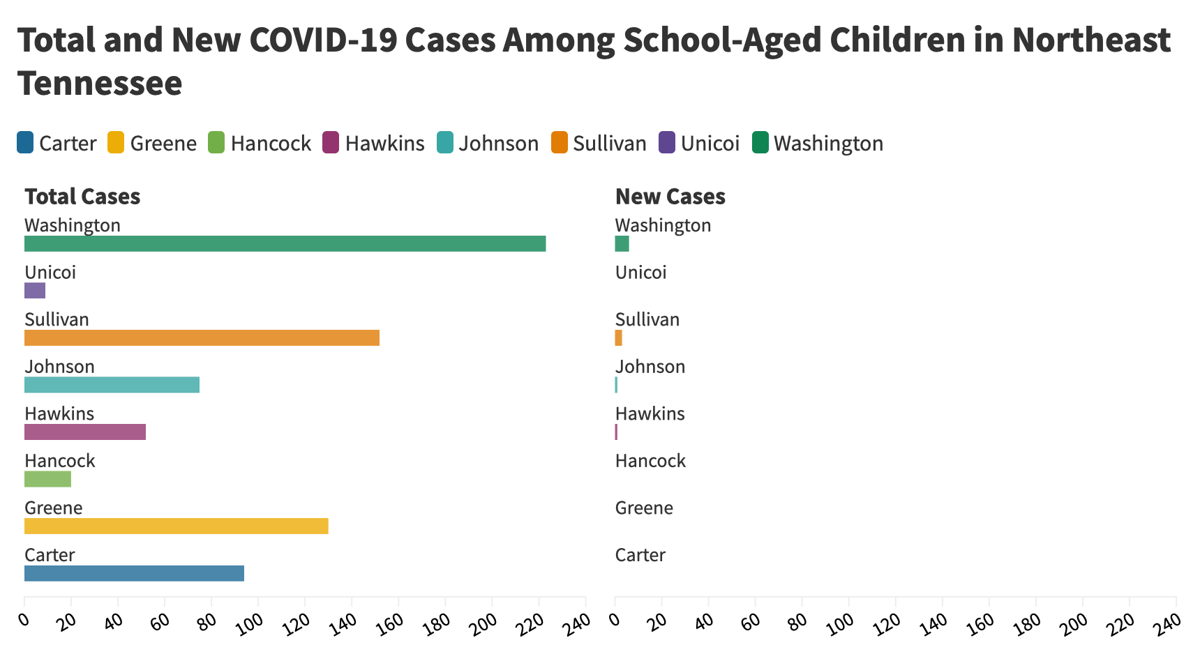 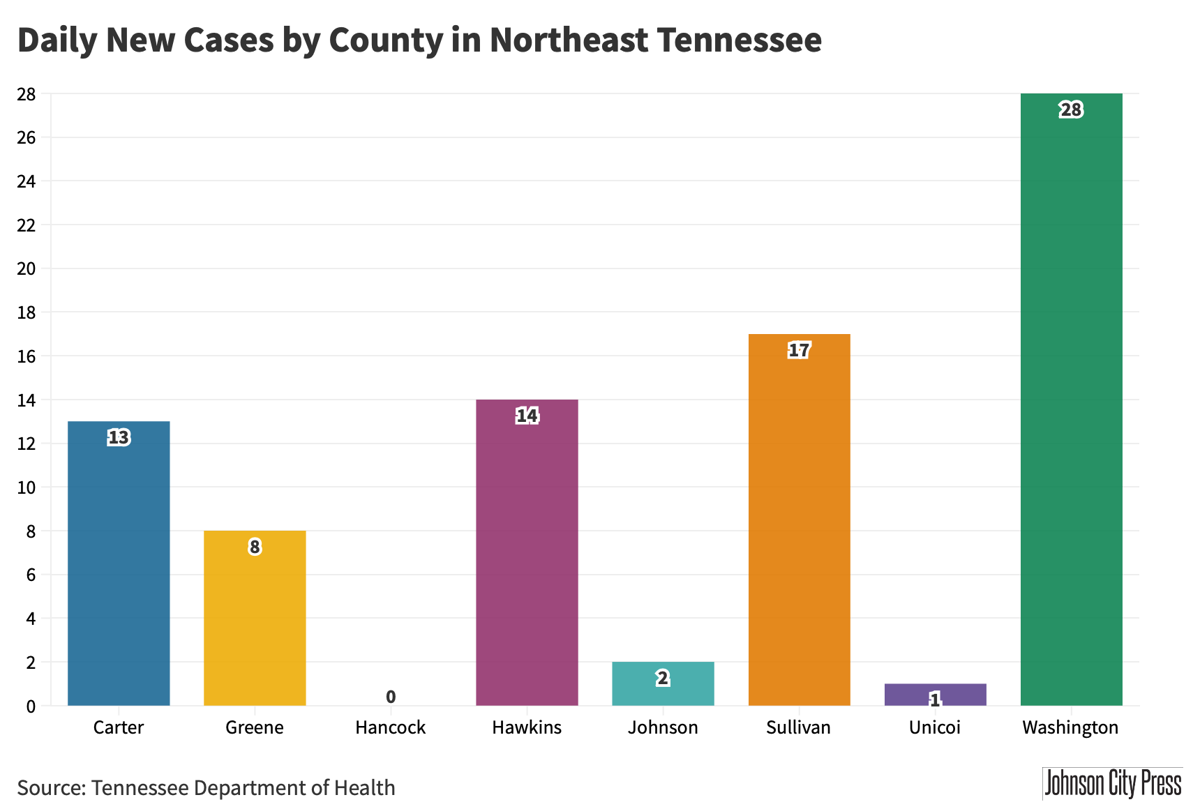 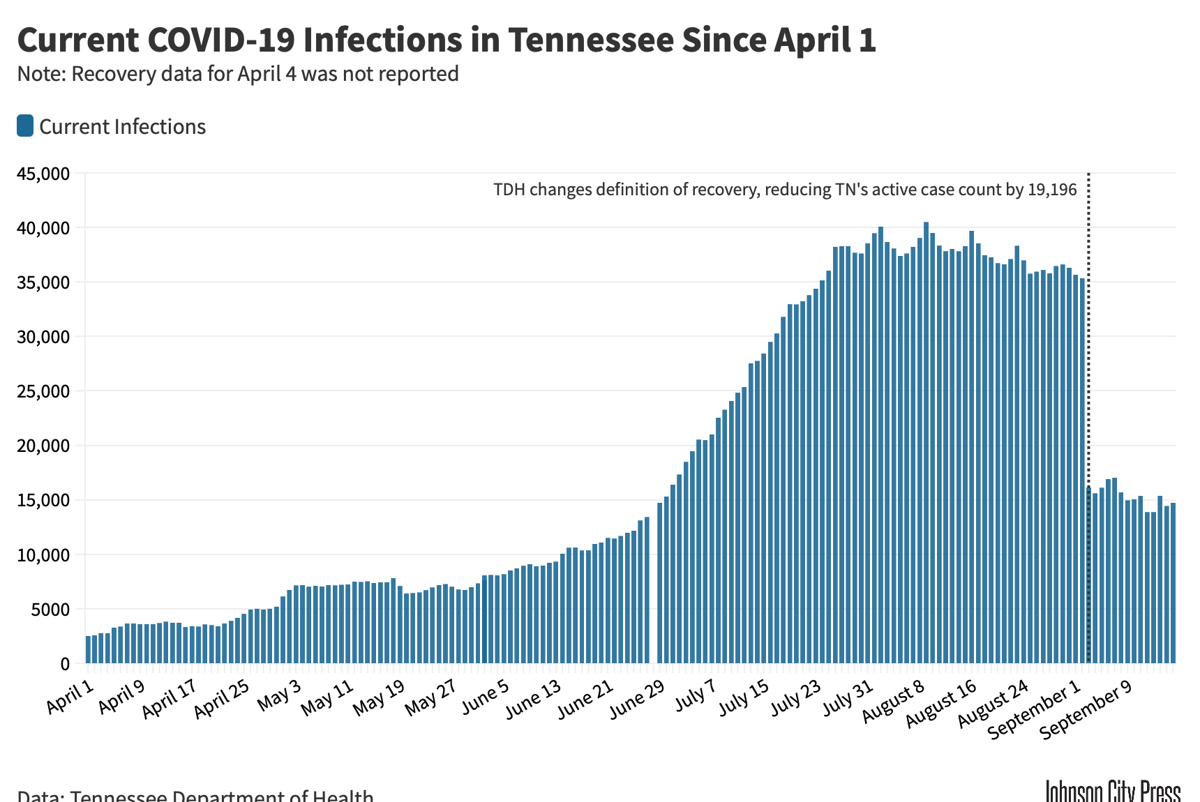 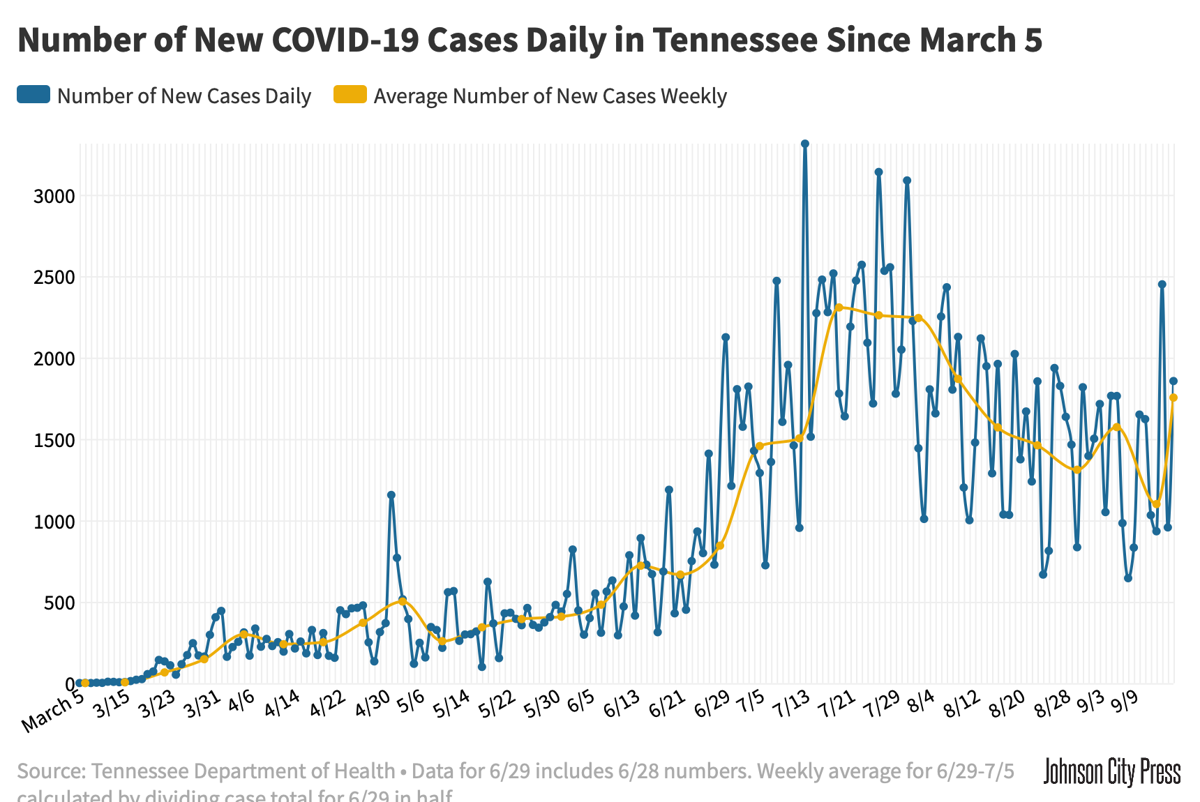 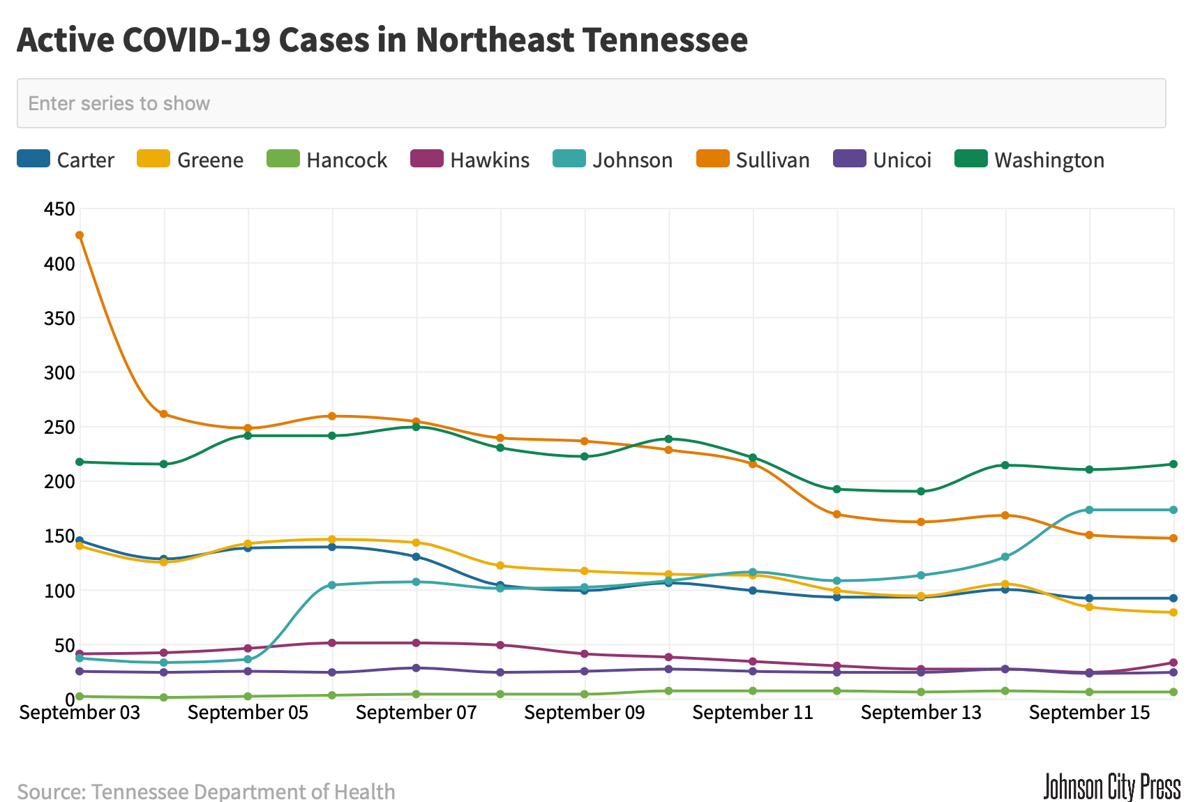 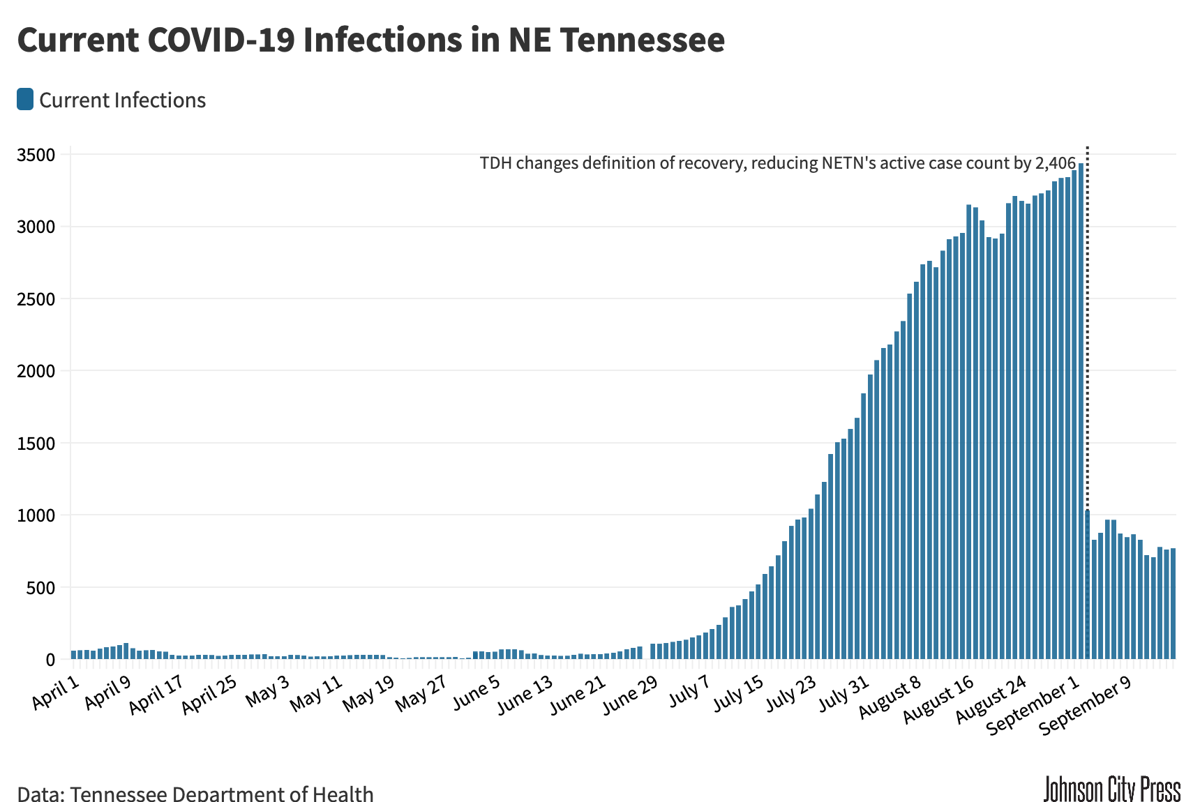 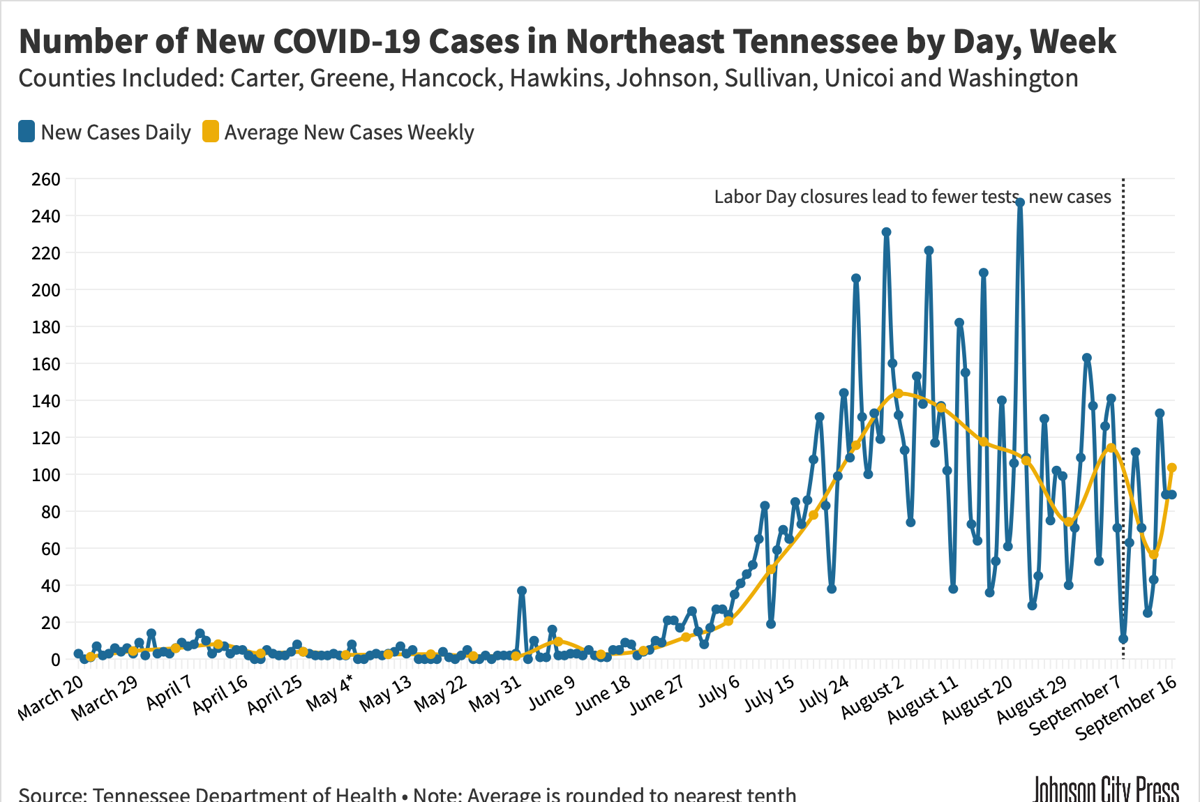 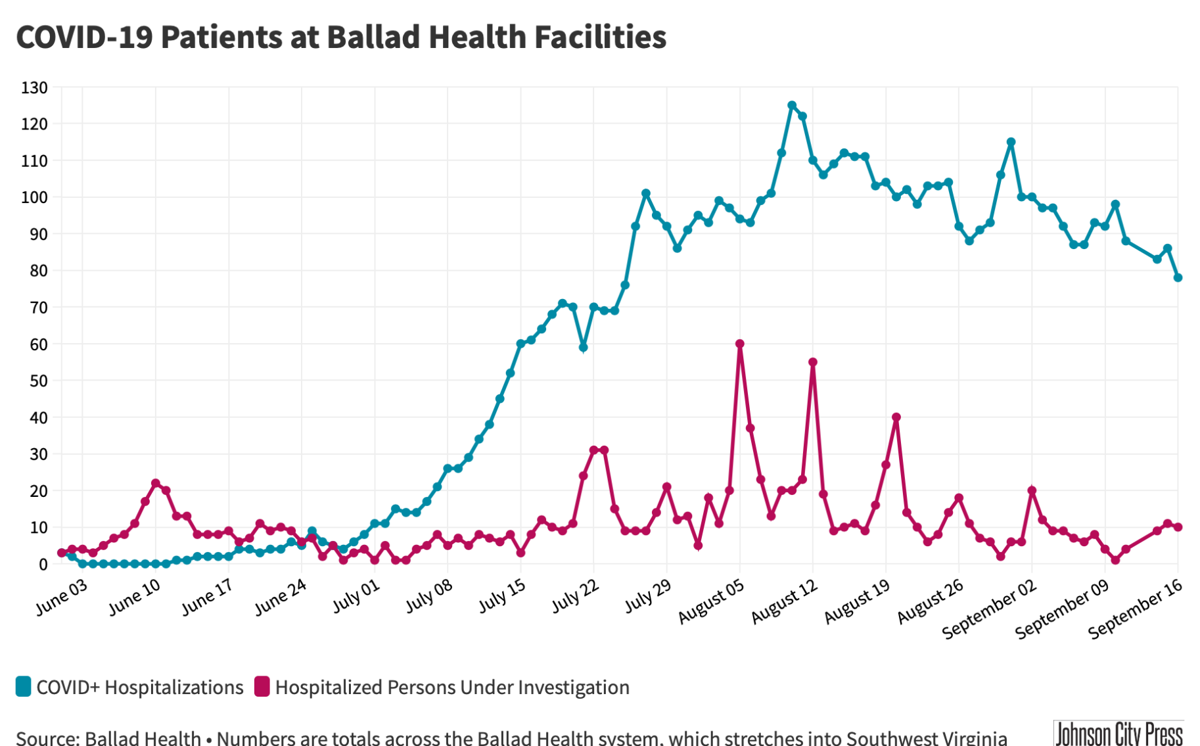 Washington County reported its 27th novel coronavirus-related death on Wednesday, bringing the region’s death toll to 135. Since Sept. 1, 46 people have died in the region.

Northeast Tennessee’s death toll increased by one on Wednesday, the seventh death reported since Monday. A third of all deaths have occurred this month.

The region reported 89 new cases for the second straight day, with the average number of new cases per day at 103.6 since Monday — nearly double last week’s average of 56.6. Washington (+28), Sullivan (+17), Carter (+13) and Hawkins (+11) all reported a double-digit increase in cases. Hancock County was the only county to not report an increase in cases.

The region’s active case count, up seven on Wednesday, rose to 769 after falling the previous day. Only Greene (-5) and Sullivan (-3) counties reported decreases in active cases, while Carter, Hancock and Johnson saw their case totals remain flat from Tuesday. Washington County (215) still has the most active cases, followed by Johnson (173) and Sullivan (147). No other county has more than 100 active cases, though Carter County is close with 92. Johnson County has the highest rate of active cases per 100,000 population with 973.

Since Sept. 6, Johnson County has reported 175 new cases of COVID-19, and currently has the highest new case rate per 100,000 people over the last seven days at 96 due to an outbreak at the Northeast Correctional Complex. In recent days, the county has seen three major spikes in new cases on Sept. 6 (+71), Sept. 14 (+22) and Sept. 15 (+49). All have been tied to the prison, according to County Mayor Mike Taylor.

According to the data from the Tennessee Department of Correction, 81 prisoners at NECX have active virus infections, and at least 20 new cases among staff have been reported since Sept. 8. This data was last updated on Sept. 14, so it’s likely any increase in new cases since then has not yet been reported.

“I think as those numbers are processed through the labs and added to our count, I think as we get past the amount of time to get those back, I think you’ll see our numbers start to come back to what we were typically seeing in Johnson County,” Taylor said.

Of those hospitalized, 12 were in intensive care and eight were on ventilators as both metrics continue their downward trend. Since Ballad began releasing its COVID-19 scorecard on Aug. 5, ICU patients have never been below 15 for three straight days, while the number of ventilator patients hadn’t been below 10 for consecutive days until this week. This data does not include weekend figures, which aren’t reported.

In the region, there were five new hospitalizations reported in Washington (+3), Hawkins (+1) and Sullivan (+1) counties.

East Tennessee State University had 10 active cases — nine students and one employee — on Tuesday evening, a drop of two from Monday’s total.

There were 27 people in isolation in on-campus housing as of Tuesday evening, as well, which includes positive cases, those awaiting test results or people who’ve been exposed to an infected individual.

ETSU updates its COVID-19 dashboard weekday evenings, and these numbers reflect totals as of Tuesday evening.

Cases attributed to Mountain Home reflect people tested or treated at the facility for known or probably COVID-19 infection. Mountain Home is not saying where the deaths or cases are concentrated, citing privacy concerns, but did say cases are reflected in data released by the state every day.

As a result of the increase, active cases in the state rose by nearly 300, up to 14,734. That number is still far below the state’s peak of 17,027 active cases since the state changed the reporting threshold for an inactive case on Sept. 3.

There were 24 new deaths reported Wednesday, bringing the total since Monday up to 73.