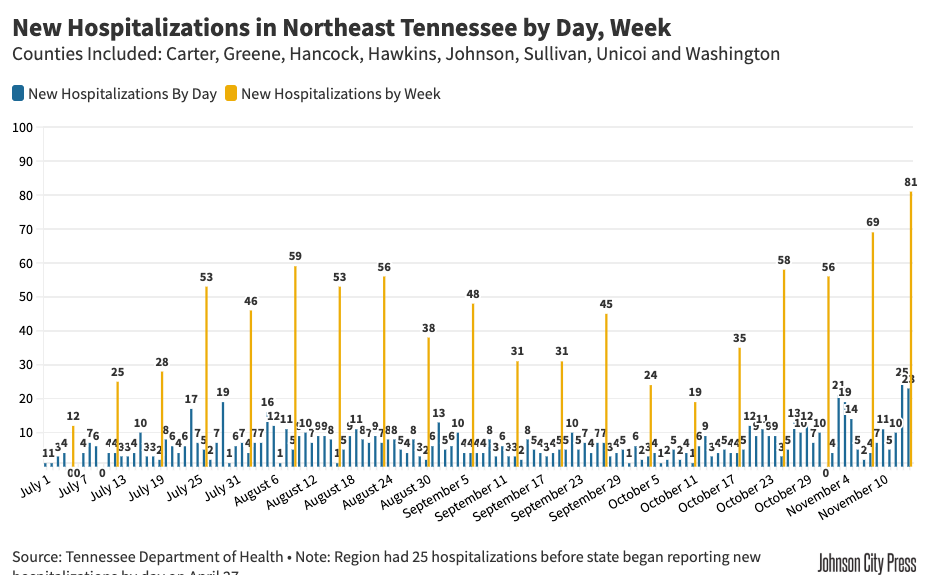 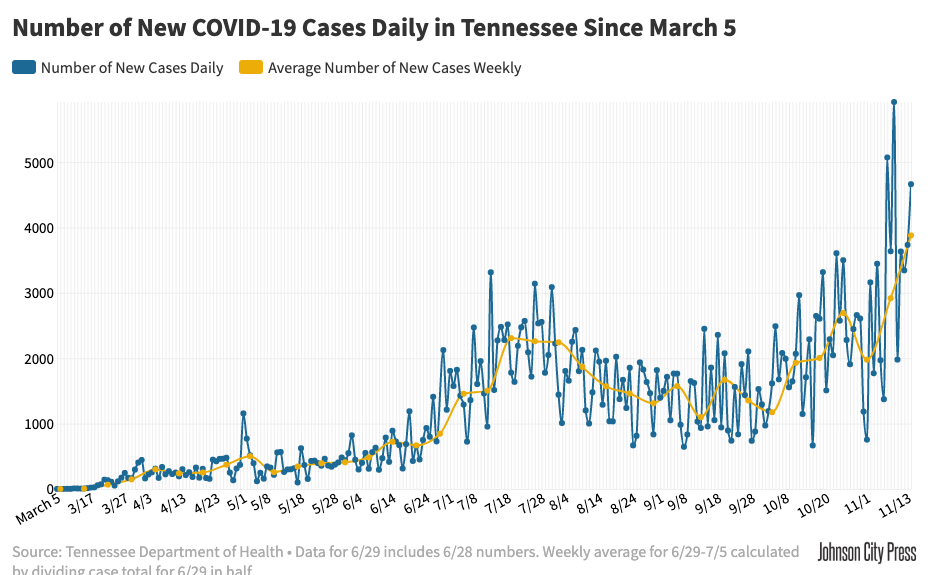 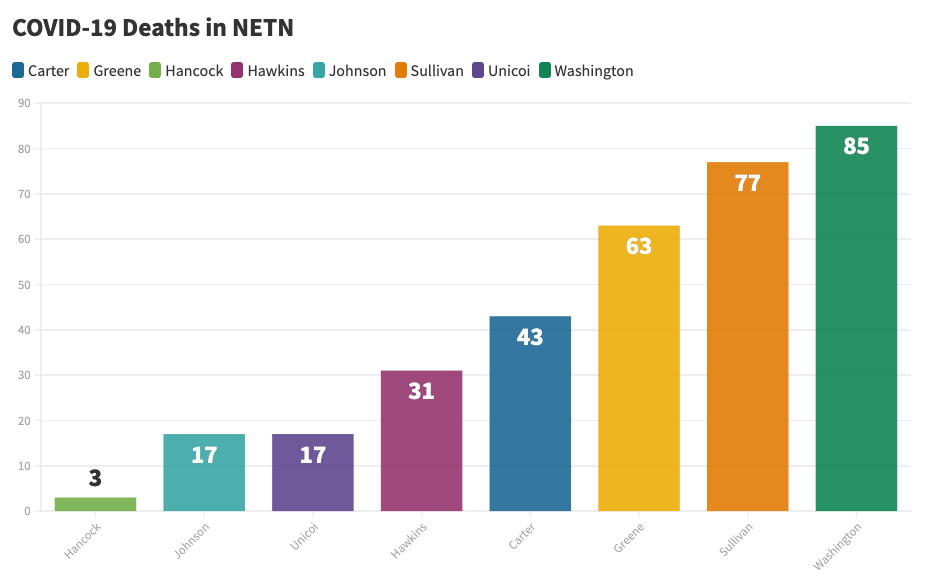 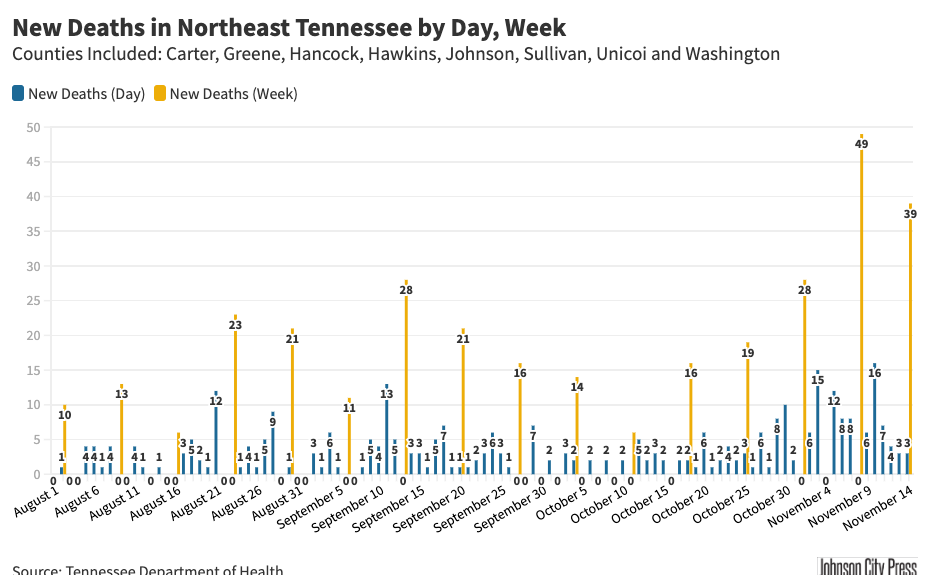 COVID-19-related deaths in NETN Since Aug. 1 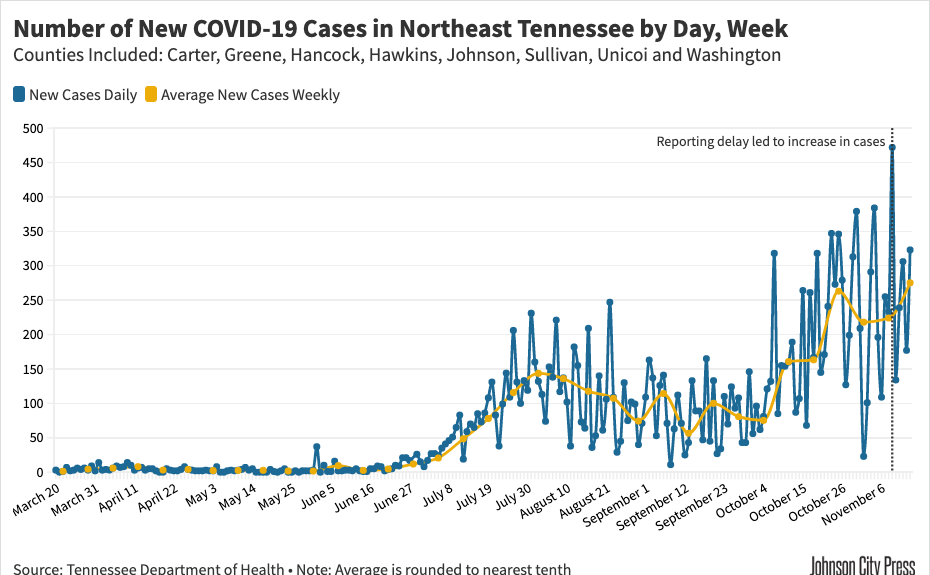 COVID-19-related deaths in NETN Since Aug. 1

Hospitalizations and deaths related to the novel coronavirus (COVID-19) continued to mount Saturday in Northeast Tennessee.

Across the eight-county region, 23 more people had been hospitalized, taking this week’s total to a new record. Since Monday, 81 people have been hospitalized with the virus, 12 more than the weekly record set last week, with Sunday’s data still to come.

Northeast Tennessee also reported three more virus-related fatalities, bringing the overall total to 336 since the pandemic began. Since Nov. 1, 88 people in the upper eight counties have died, already a record for a full month with two weeks still to go. November’s toll represents 26 percent of all deaths in the region since the first fatality was reported April 1.

The new fatalities reported Saturday were in Sullivan County (2) and Unicoi County (1).

While the region added 323 new cases on Saturday, the number of active cases declined by five after 325 cases reached the point considered no longer infectious. Tennessee reports cases as inactive after 14 days based on the average period patients remain infected with COVID-19. Active cases reflect the number of new cases over the same period minus deaths. As of Saturday, there were 2,146 cases considered active in Northeast Tennessee.

Since the state’s Sept. 1 adjustment for the period cases are considered infectious, current known infections in Northeast Tennessee have peaked at a high of 2,671 on Oct. 30.

The region’s slight decline in active cases Saturday was in sharp contrast to a large statewide spike. Active cases across Tennessee increased for the fourth consecutive day — by 1,728 for 32,875 known current infections. This was the highest count since the state reduced the estimated period considered infectious on Sept. 1.

All eight counties reported new cases. Washington County added the most at 91, followed by Sullivan at 77, Greene County at 36, Carter County at 36, Hawkins County at 31 and Unicoi at 24. The region’s rural, remote counties also added new cases — five in Johnson County and two in Hancock County.

Ballad Health reported Saturday that 230 people were hospitalized in its facilities in Tennessee and Virginia, along with nine patients awaiting results. Of those hospitalized, 43 were in intensive care 43 and 27 were on ventilators.

The health system reported a 17.3% positive test rate in its 21-county service area. Over a seven-day period, 62 people had died from virus-related causes for a total of 555 since the pandemic began.

Since Monday, 282 people across Tennessee have died from virus-related causes, a record for a week with Sunday’s data still to come. Month to date, 524 fatalities have been reported or 13.5 percent of all deaths since the pandemic began.

Tennessee had averaged 3878.2 cases per day so far for the week, far outdistancing last week’s record seven-day average of 2,198. State officials have attributed the increase in part to a backlog of data.