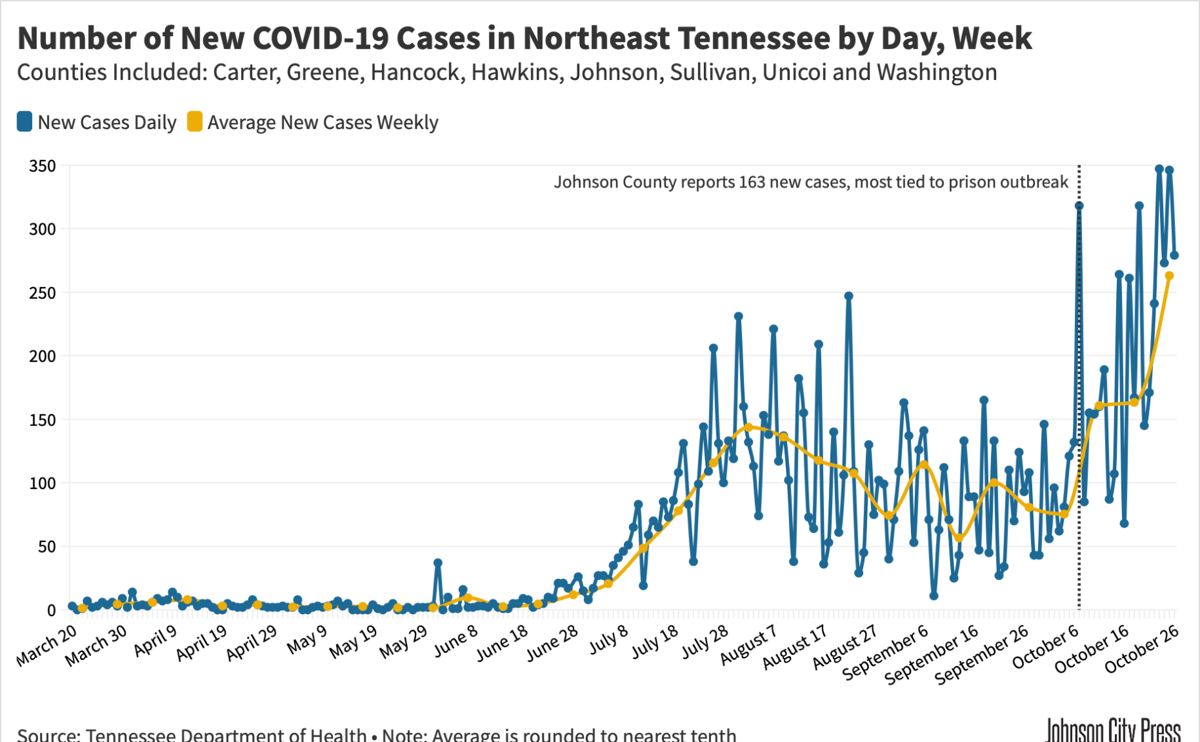 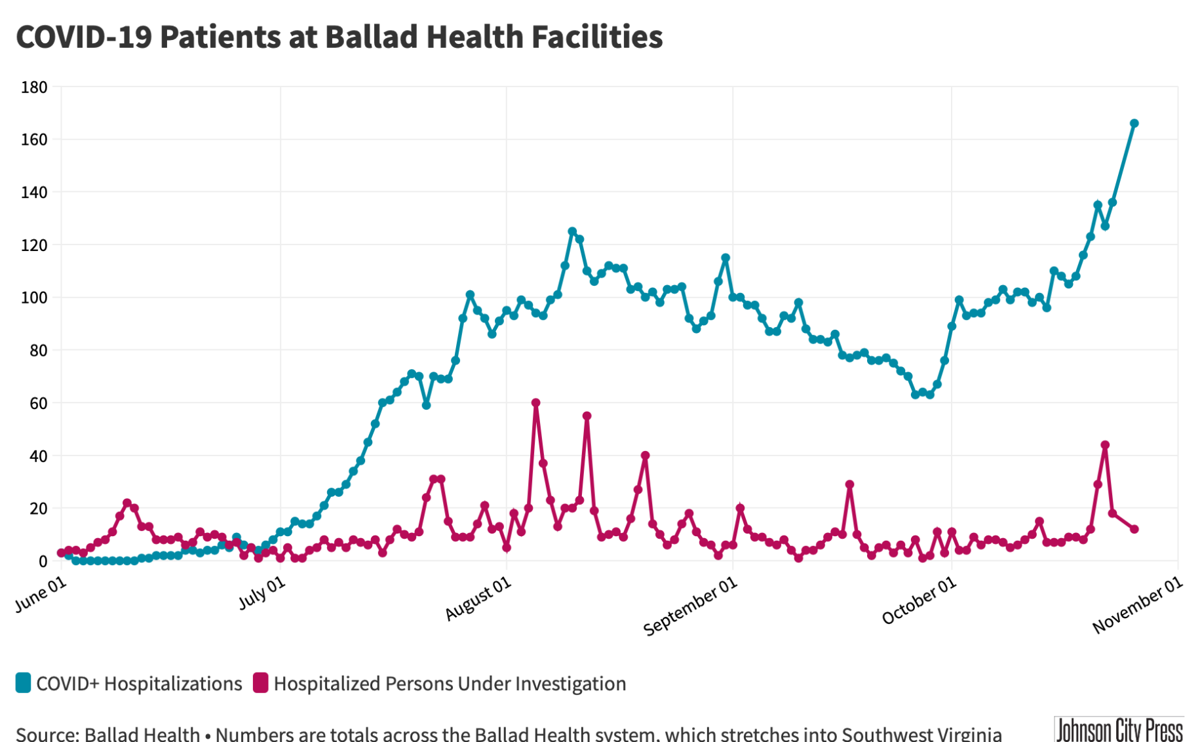 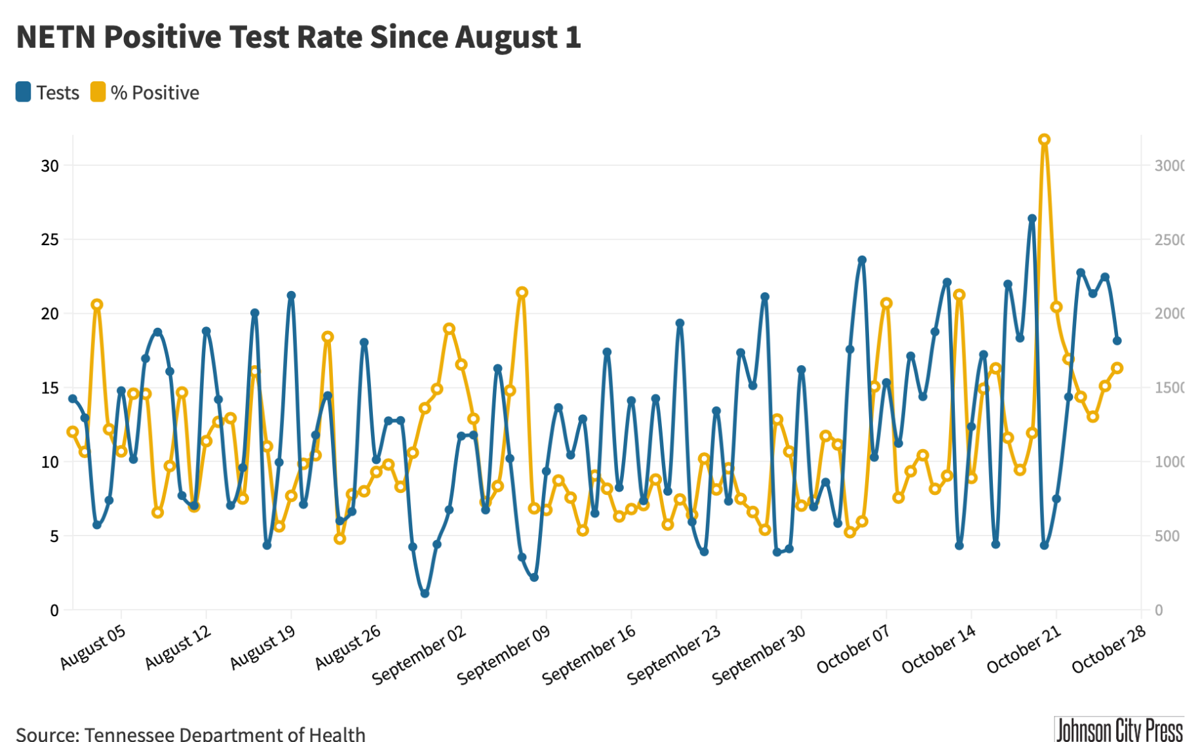 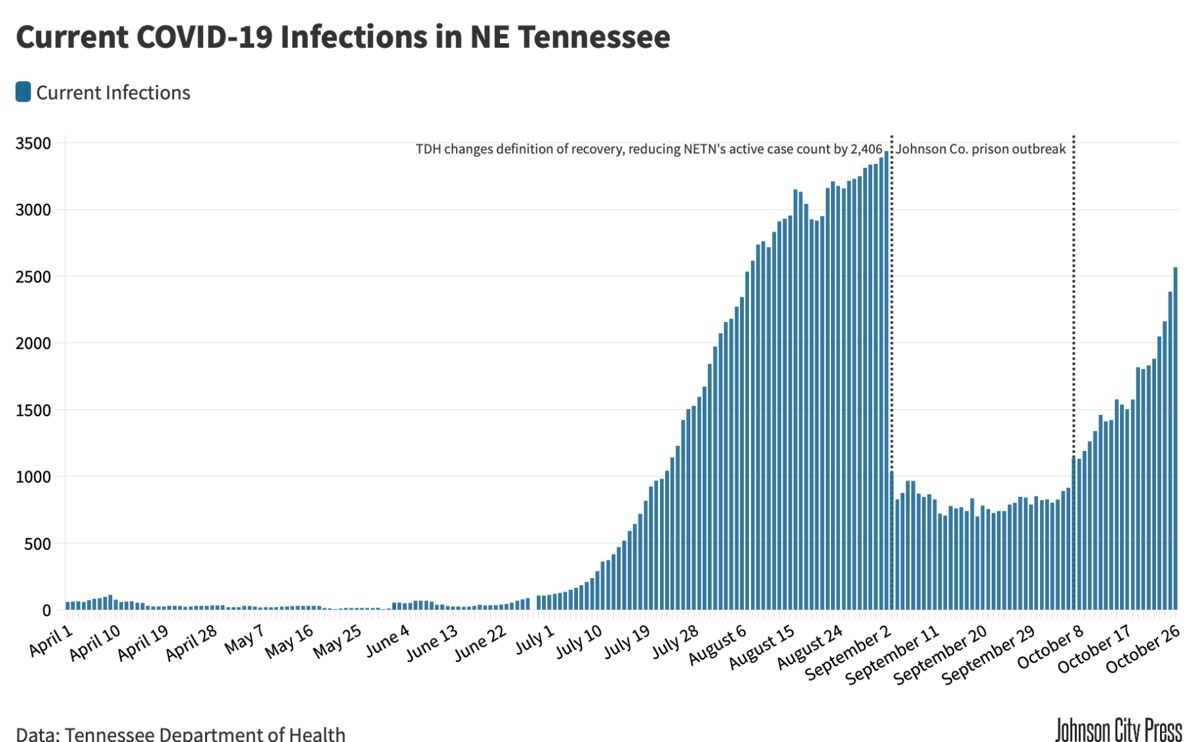 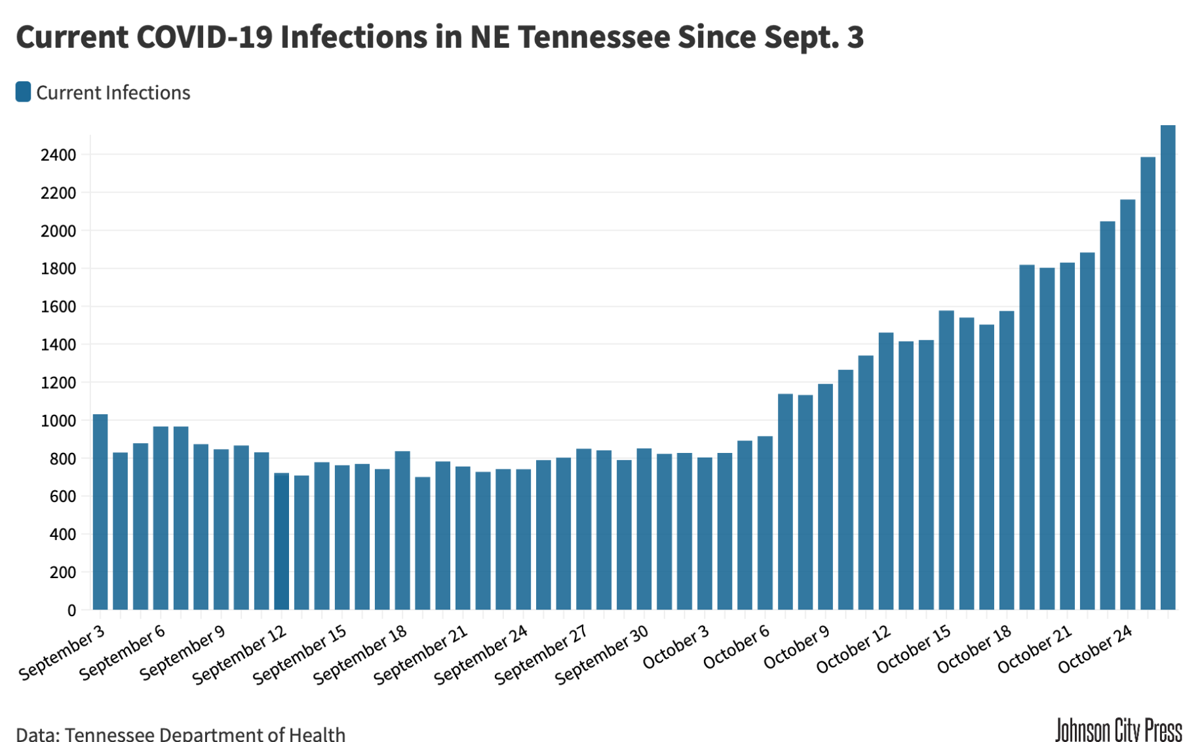 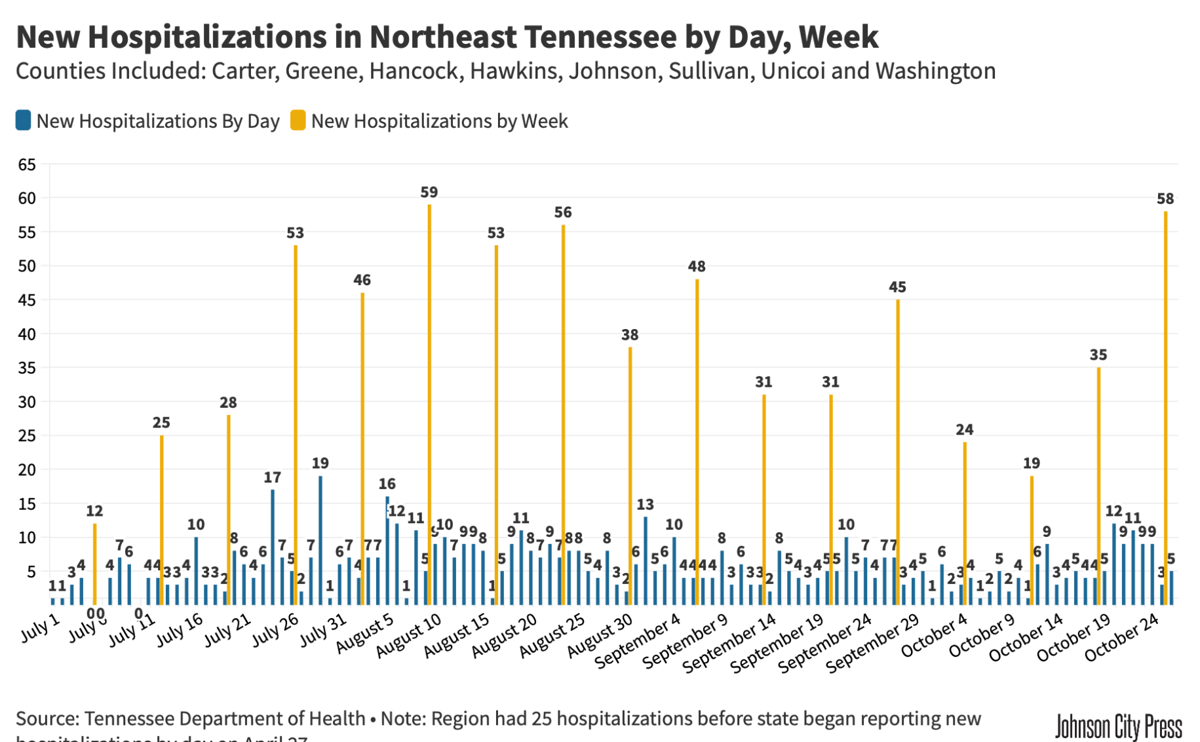 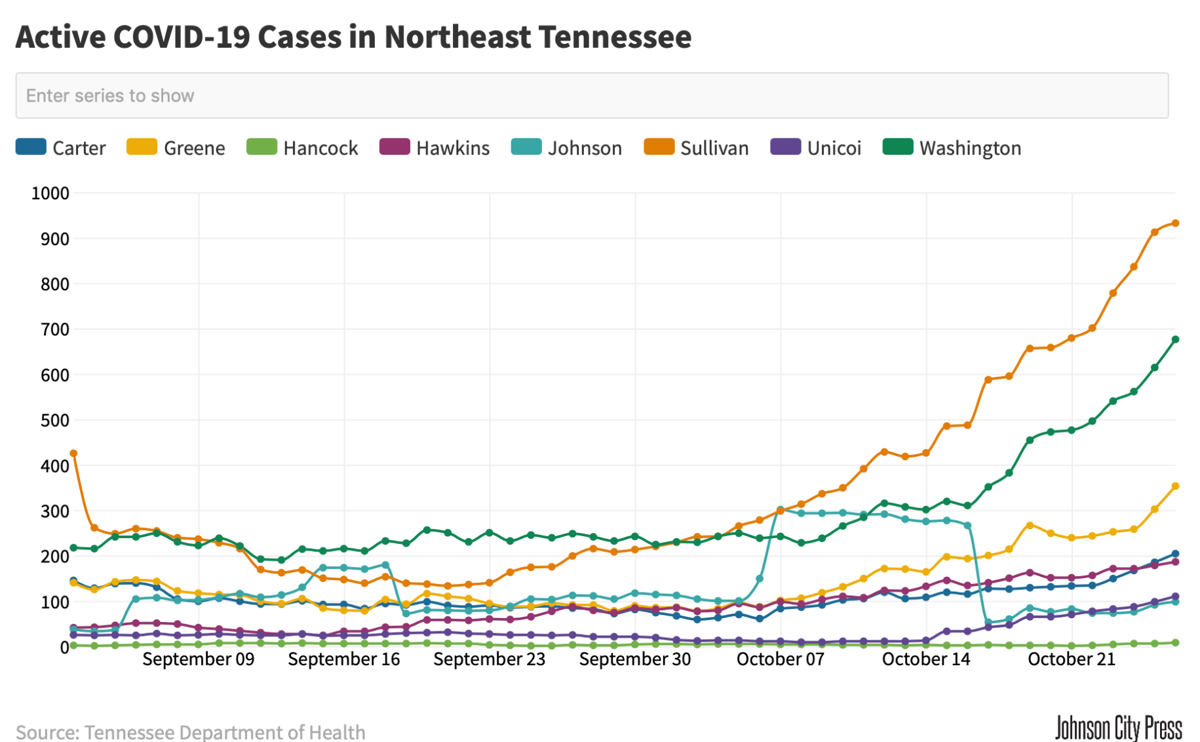 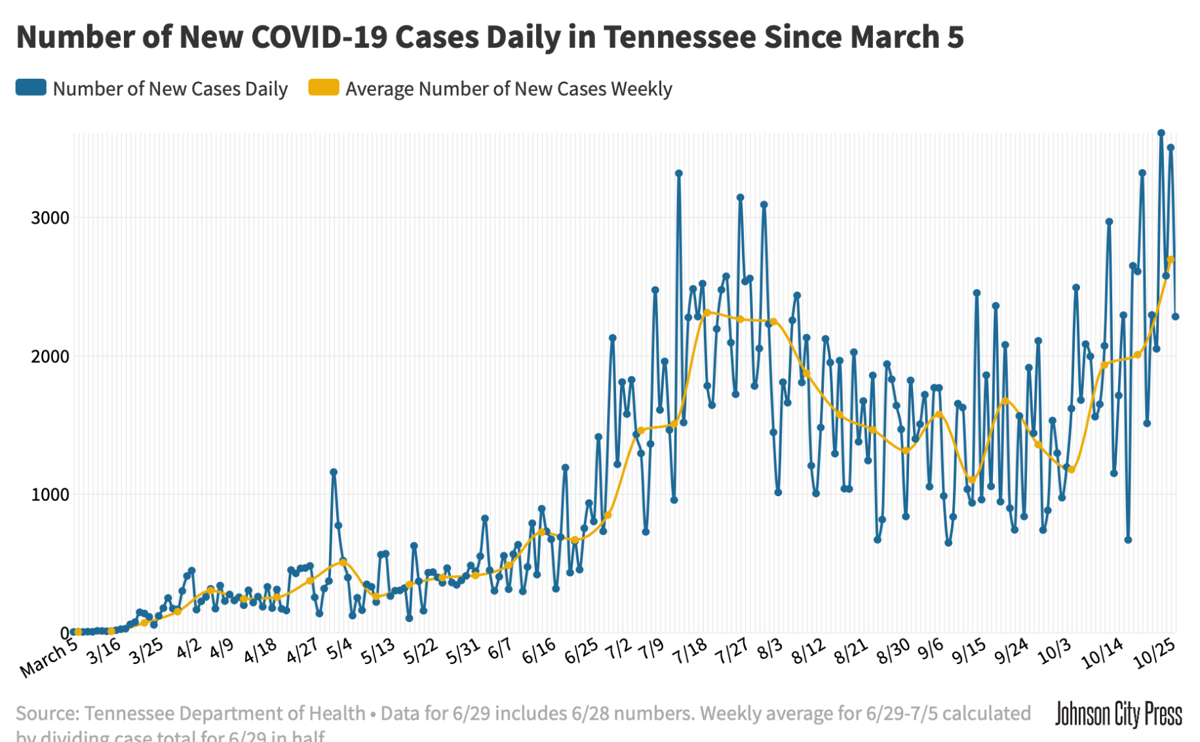 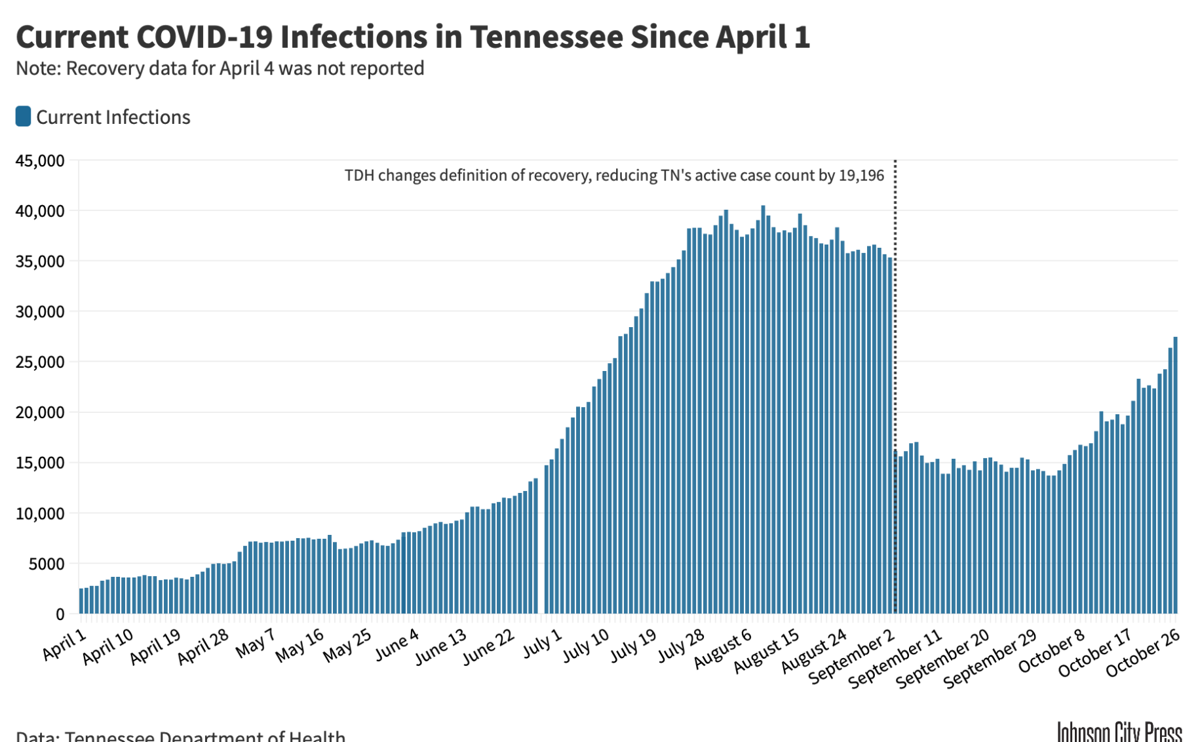 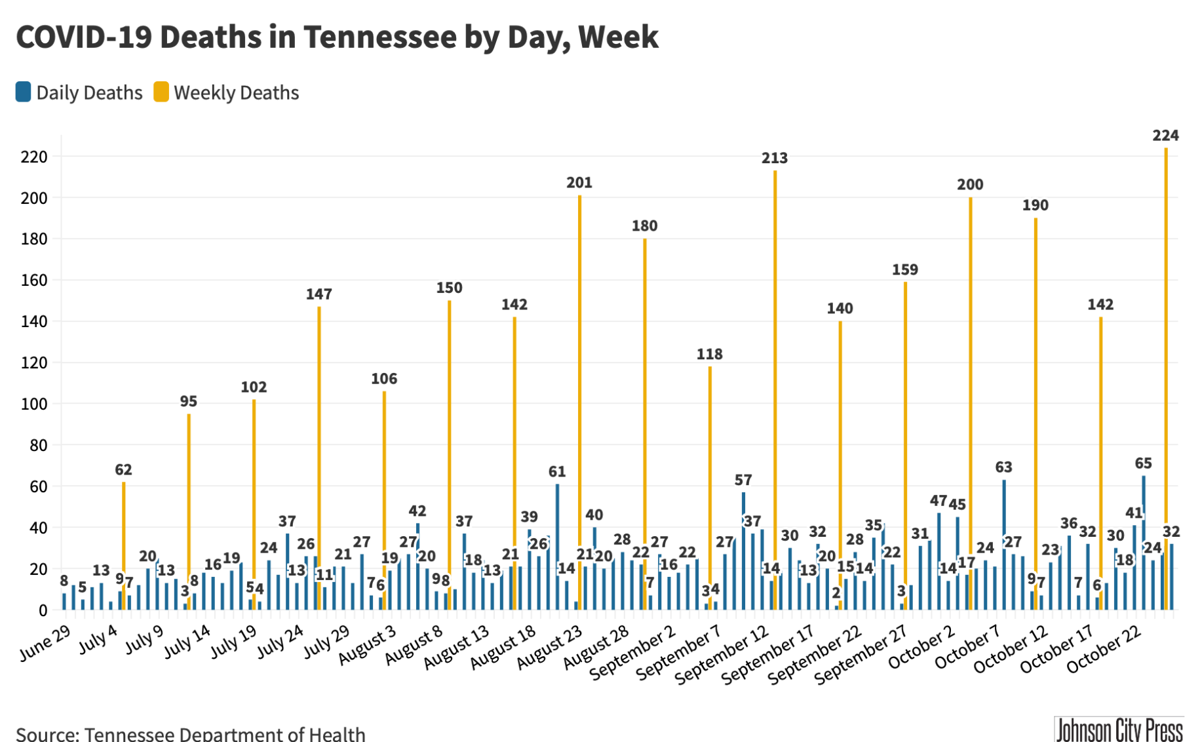 With the rate of new cases increasing, active cases have risen as well — up 181 on Monday to 2,567. It is the most active cases reported in the region since Sept. 3, when the state reduced the length of the expected infectious period from 21 to 14 days. After 14 days, cases are automatically rolled in the inactive category.

Overall, Sullivan County’s 932 led the region, and Washington County’s 676 was a distant second. Greene County was third with 353 active cases.

Hancock County, which reported only 10 new tests, had a 10% positivity rate — pushing it into the White House Coronavirus Task Force’s red zone, which considers new cases per 100,000 population and the positivity rate over seven days. Hancock County was the region’s last county not yet in the red zone. All Northeast Tennessee counties, based on measures used by the task force, are now in the red zone.

“To our communities, we plead with you to stay home, social distance, wash your hands and wear masks in public,” Ballad said in a tweet following Monday’s announcement. “It is up to all of us to ensure that our hospitals don’t become overwhelmed so we can continue to provide the best possible care to all patients.”

According to estimates provided by Ballad last week, there are about 110 new hospitalizations and 35 deaths for every 1,800 new cases diagnosed.

Northeast Tennessee reported a record number of new cases among school-age children for the second consecutive day on Monday, with 50 new cases reported. On Sunday, there were 43 new cases.

East Tennessee State University had 20 active cases of COVID-19 affecting 13 students and seven employees as of Monday afternoon — nine below the peak of 29 reported in late-September. There were 31 people quarantined in ETSU housing, which can include positive cases or those awaiting test results.

Last week the university reported 24 new cases, the most since the end of August. The record for new cases in a week is 56 in late July. Of the 288 cases, 268 are considered inactive.Mountain Home VA

After setting a record for new cases in a week last week, Tennessee added 2,279 new cases on Monday leading active cases to increase by more than 1,000 statewide. As of Monday, there were 27,473 active cases — a fourth straight day with a record number of active cases since the state’s reporting adjustment on Sept. 3.

Data showed that of the 90 facilities reporting on Monday, there were an average of 12.2 patients in each. If that average held with all 111 hospital reporting, that would equal about 1,354 patients — which would be a record.