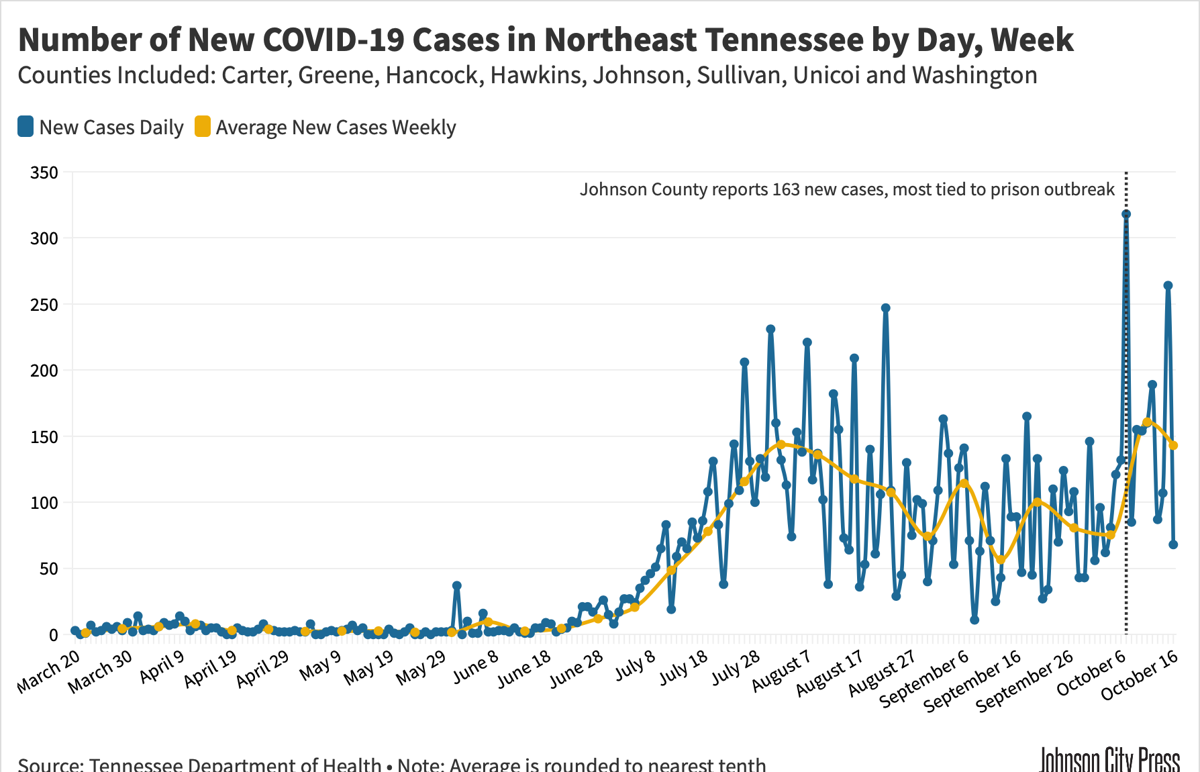 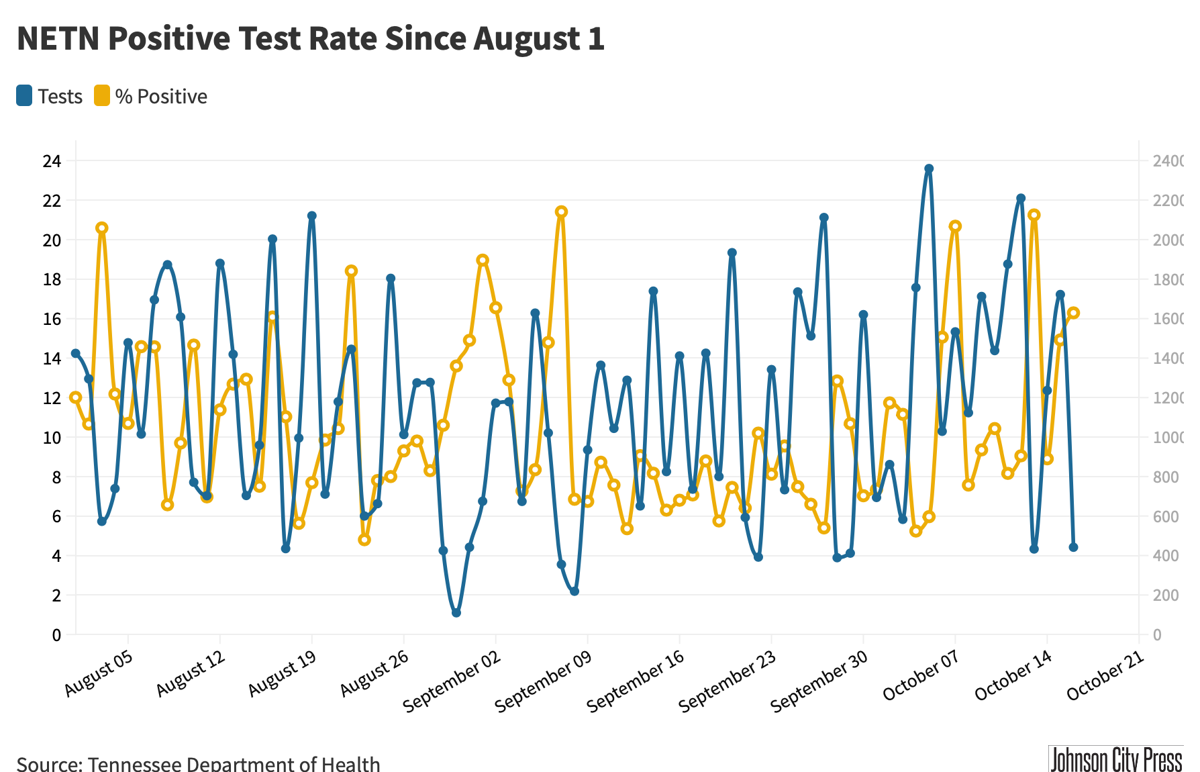 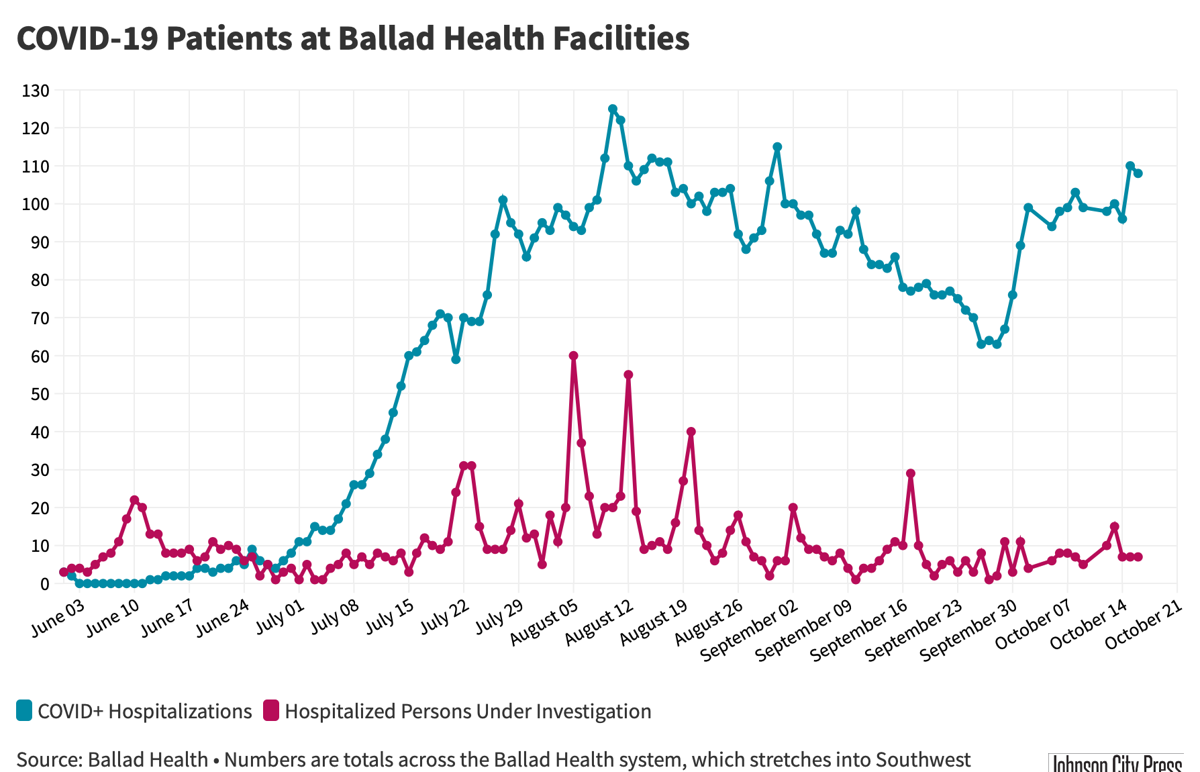 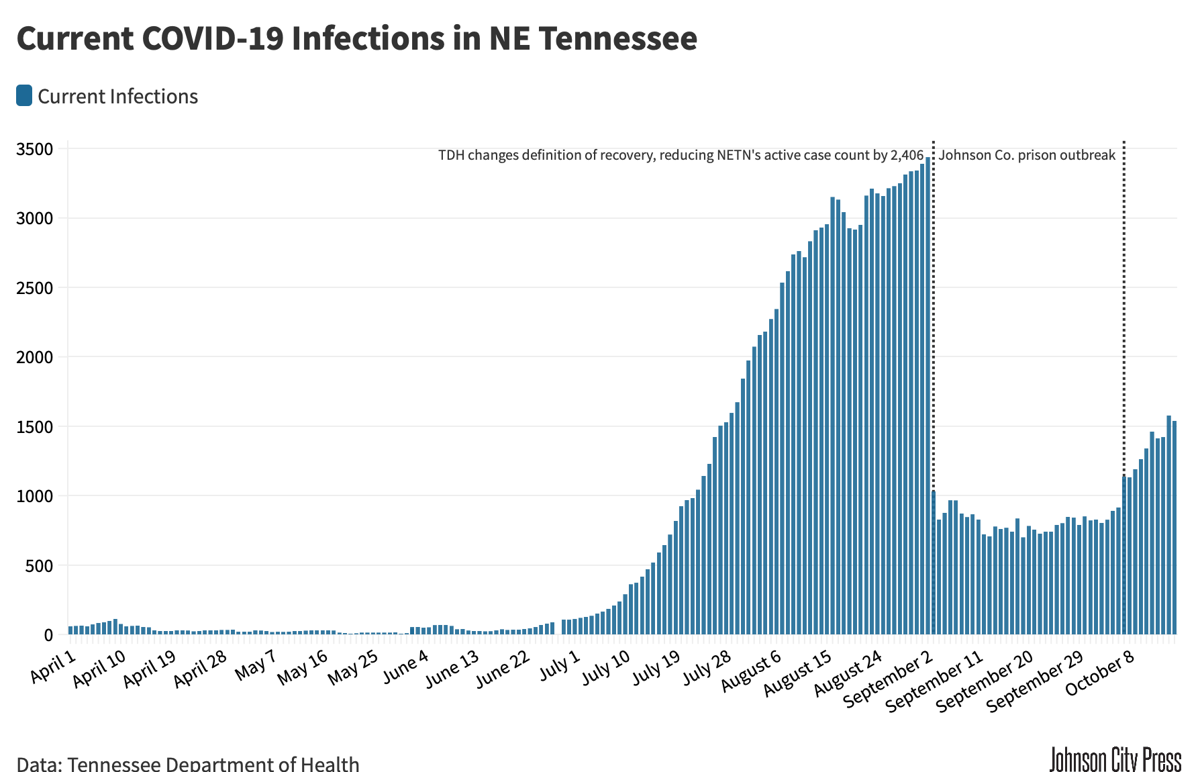 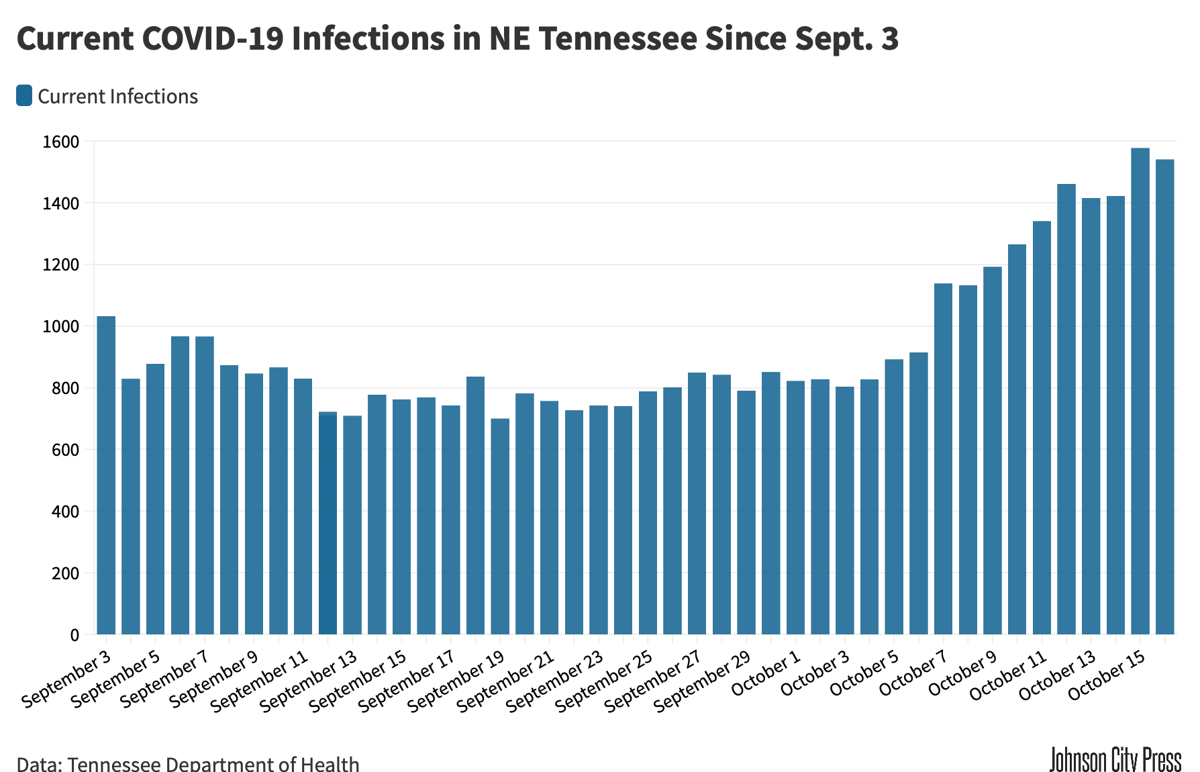 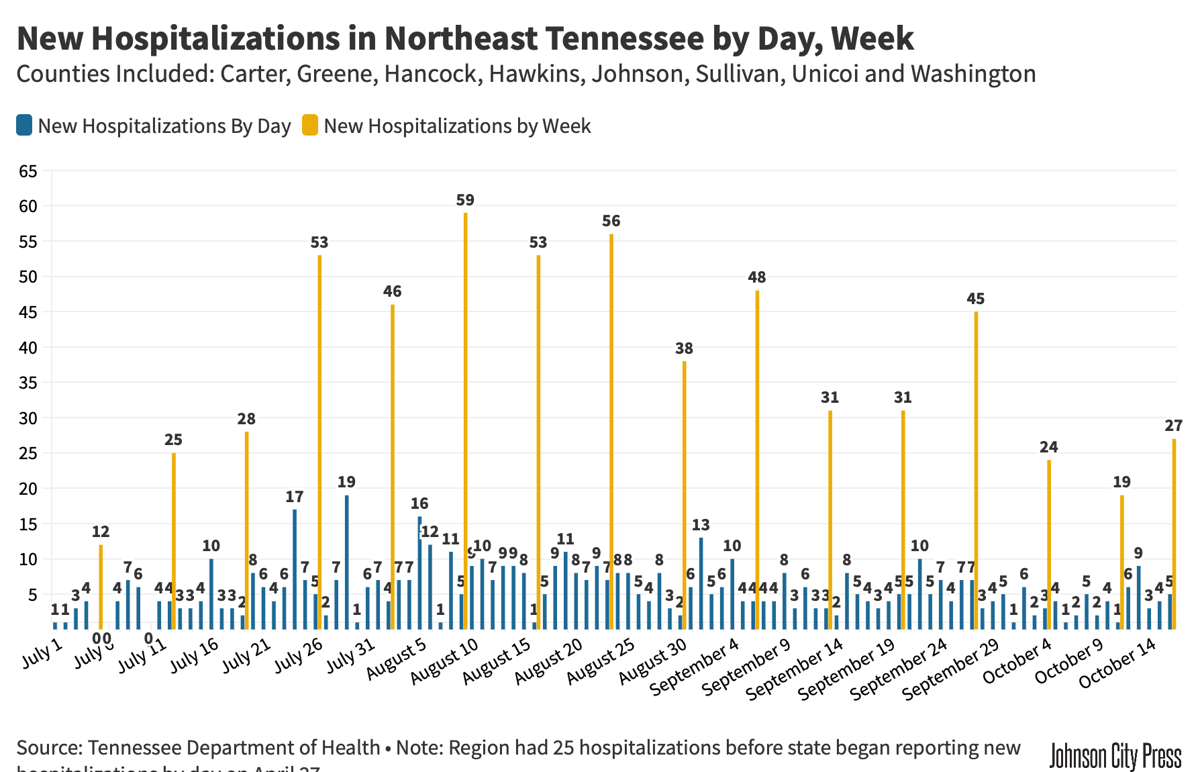 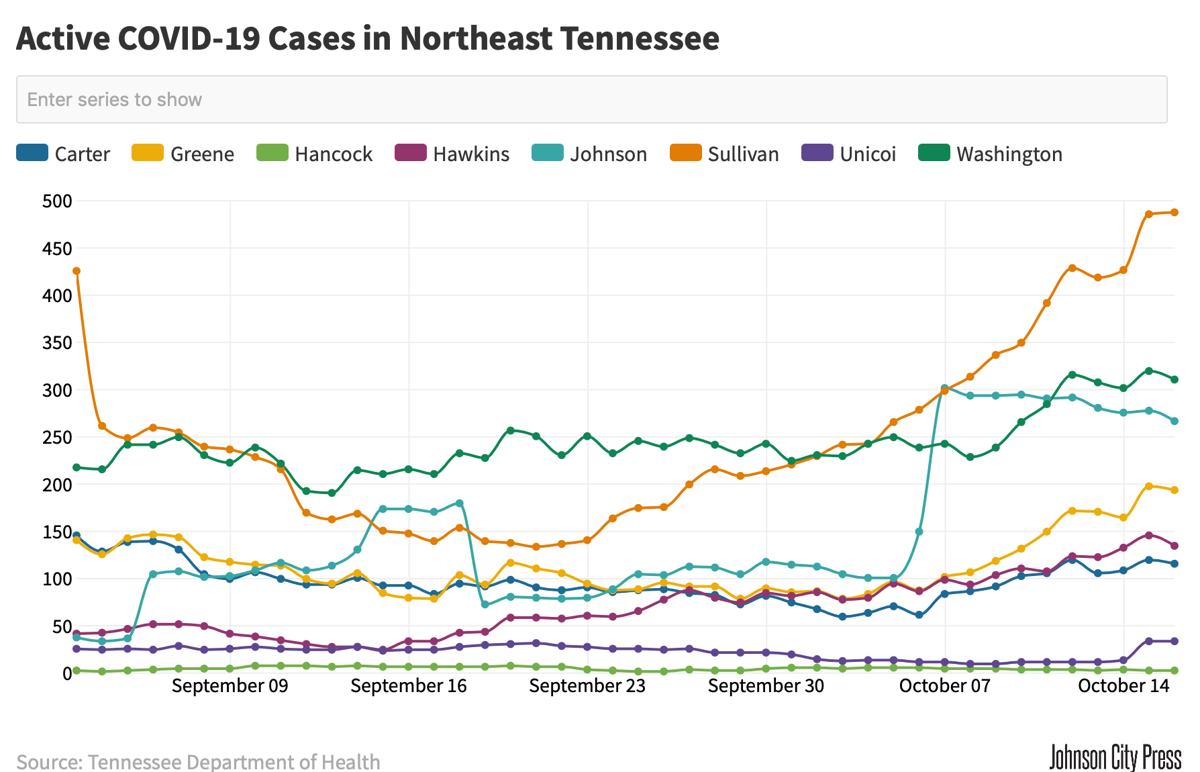 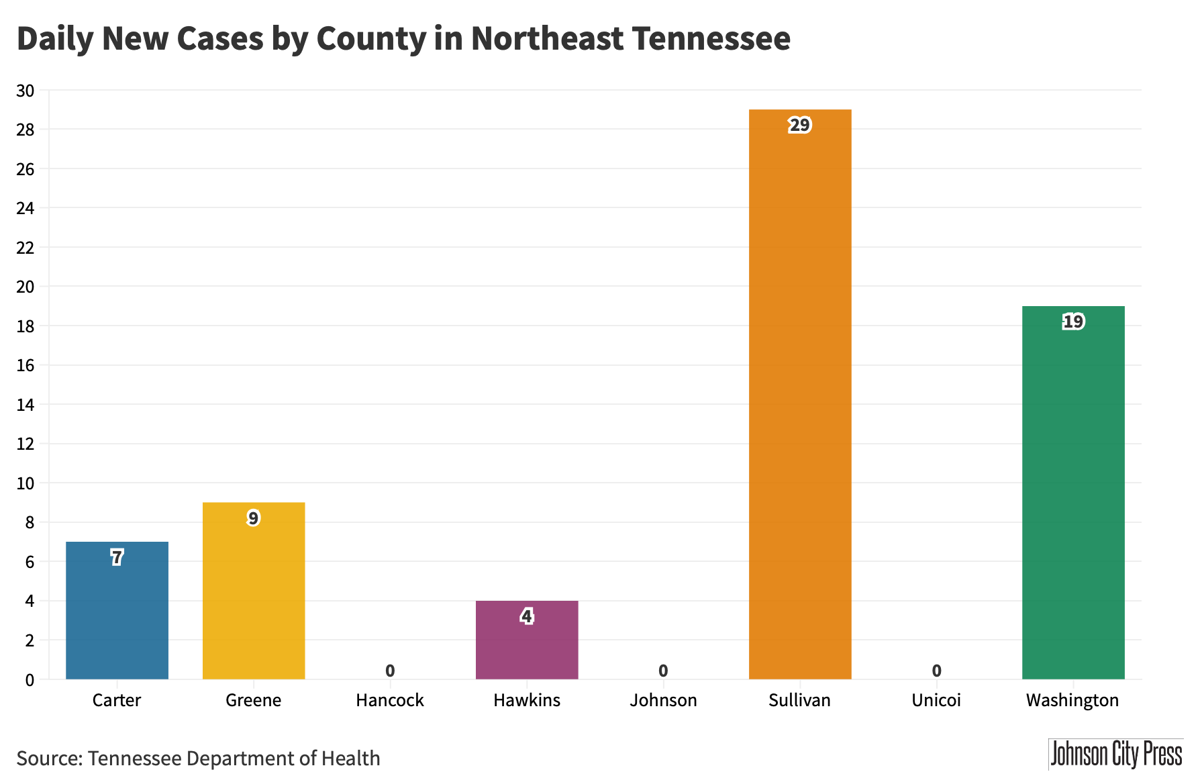 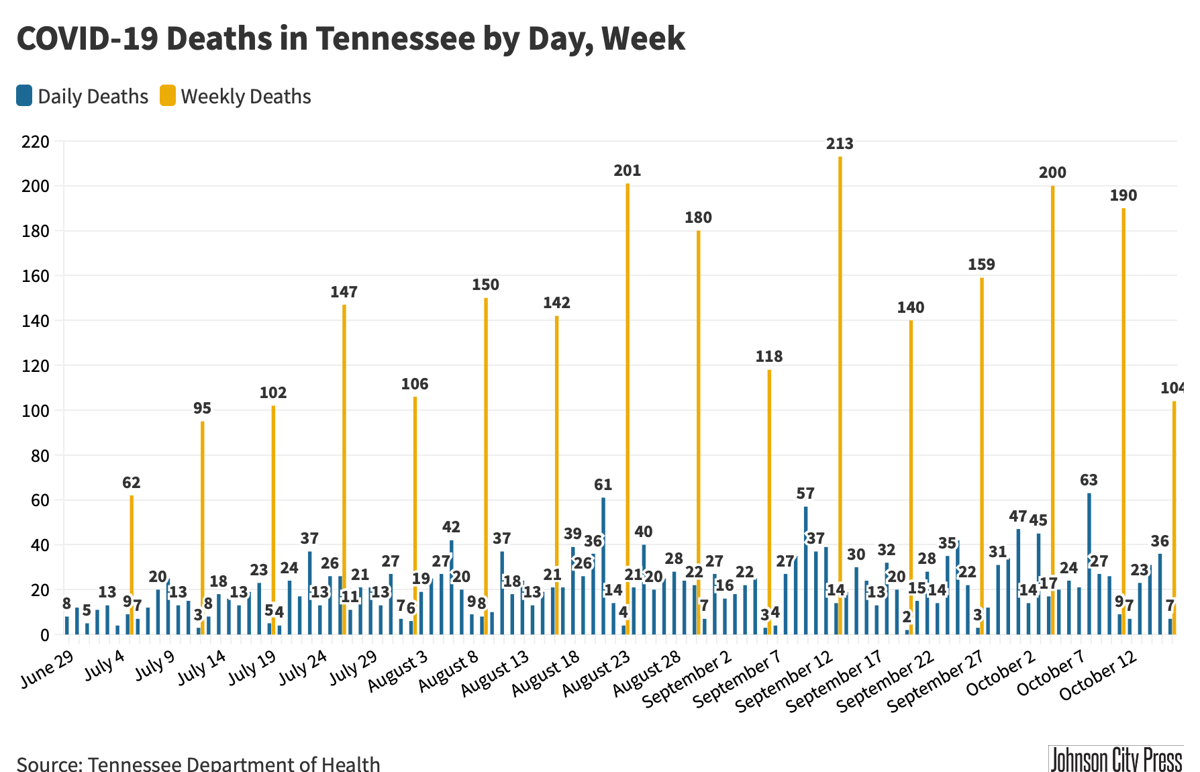 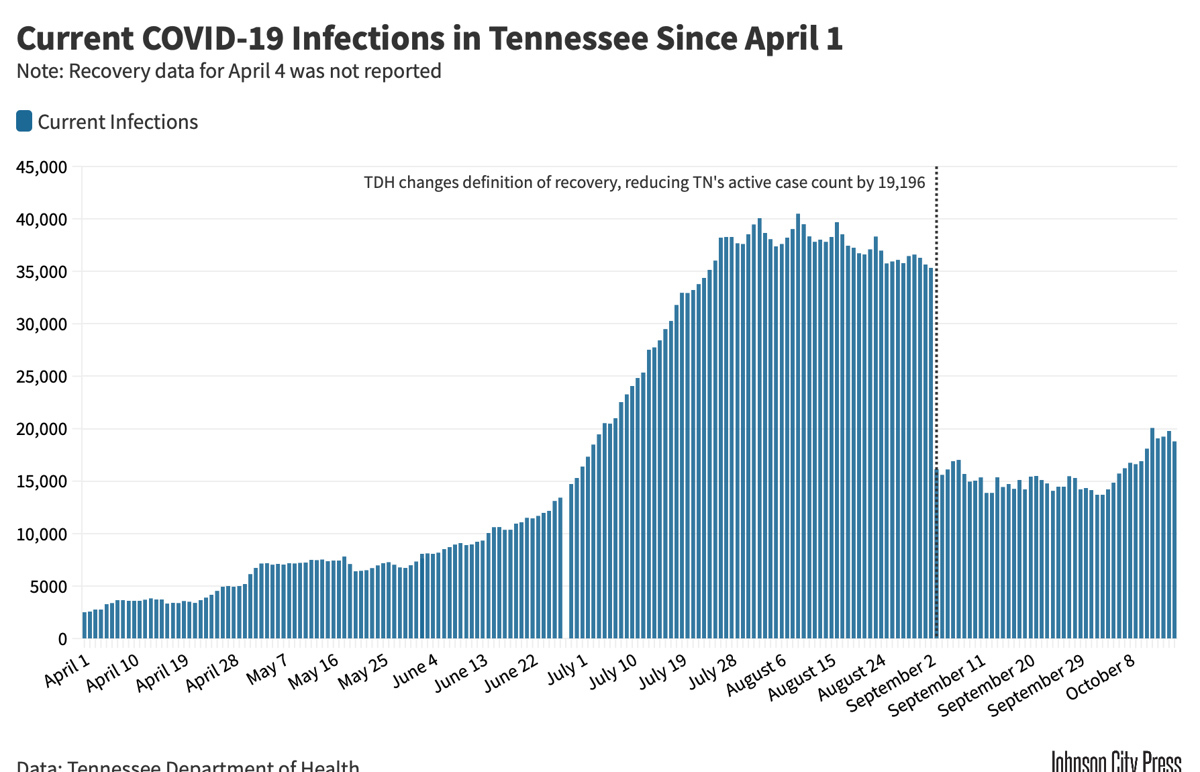 Northeast Tennessee reported fewer than 500 new tests on Friday, keeping the positive test rate well above 10% and causing a drop in the number of new and active cases in the region.

In a tweet, the Tennessee Department of Health said its reporting system experienced technical issues, causing a backlog of cases and lower-than-normal testing numbers. The tweet said the TDH anticipates higher-than-normal numbers over the next few days as the backlog is cleared.

With the state’s technical issues leading to massive decreases in new tests and cases, it’s hard to draw any conclusions from Friday’s data.

As a result of the low number of tests, new cases fell by nearly 200 from Thursday, while active cases dropped by 37. Only one county, Sullivan, reported an increase in active cases.

Hancock and Unicoi counties had no change in their active case counts. The region’s total sits at 1,540, still the second-highest total since the state’s reporting adjustment.

As of Friday, there have been 726 resident and 513 staff cases across 33 facilities in every county but Hancock, resulting in 101 deaths.

Statewide, there have been 5,877 cases of COVID-19 among residents and 5,198 among staff. Of the residents who tested positive, 834 have died — including 17 at a nursing home in Morristown, the Tennessean reported Friday.

After increasing by 14 on Thursday, the number of COVID-19 patients hospitalized in Ballad Health facilities decreased by two to 108 on Friday. Of those hospitalized, 17 were in intensive care and six were on ventilators — decreases of one and two, respectively, from Thursday. Seven others were awaiting test results.

There were five new hospitalizations reported in the region on Friday: Two in Sullivan County and one each in Greene, Hawkins and Unicoi counties. Since Monday, 27 people have been hospitalized in the region, the most since late September.

There were 11 new cases among school-age children reported Friday: 5 in Washington, two each in Carter and Sullivan and one each in Greene and Hawkins counties.

Since Monday, East Tennessee State University has reported six new cases of COVID-19, and has an active case count of nine — a drop of one from Wednesday. All of those currently infected are students. There were 12 people quarantined in ETSU housing as well, a drop of two from Wednesday. That total can include confirmed cases and those awaiting test results.

Two new cases were reported on Wednesday, bringing the overall total to 258: 215 students and 43 staff members. ETSU updates its data on weekday evenings, and this data is from Thursday night.

The Veterans Affairs facility at Mountain Home reported six new cases on Friday but no change in the number of active cases, which held steady at 71. No new deaths were reported. Mountain Home has reported 571 (+6) total cases, of which 469 (+6) are considered inactive. Thirty-one have died.

Cases attributed to Mountain Home reflect people tested or treated at the facility for known or probable COVID-19 infection.

Mountain Home officials are not saying where the deaths or cases are concentrated, citing privacy concerns, but did say cases are reflected in data released by the state daily.

Similar to what was written earlier, the state’s reporting system issue makes it difficult to take much stock in Friday’s state numbers as well. With only 5,750 new tests, the state reported fewer than 1,000 new cases (666) for the first time in 11 days. It also led to a positive test rate above 10% in the state.

Seven new deaths were reported, bringing the toll since Monday to 104.