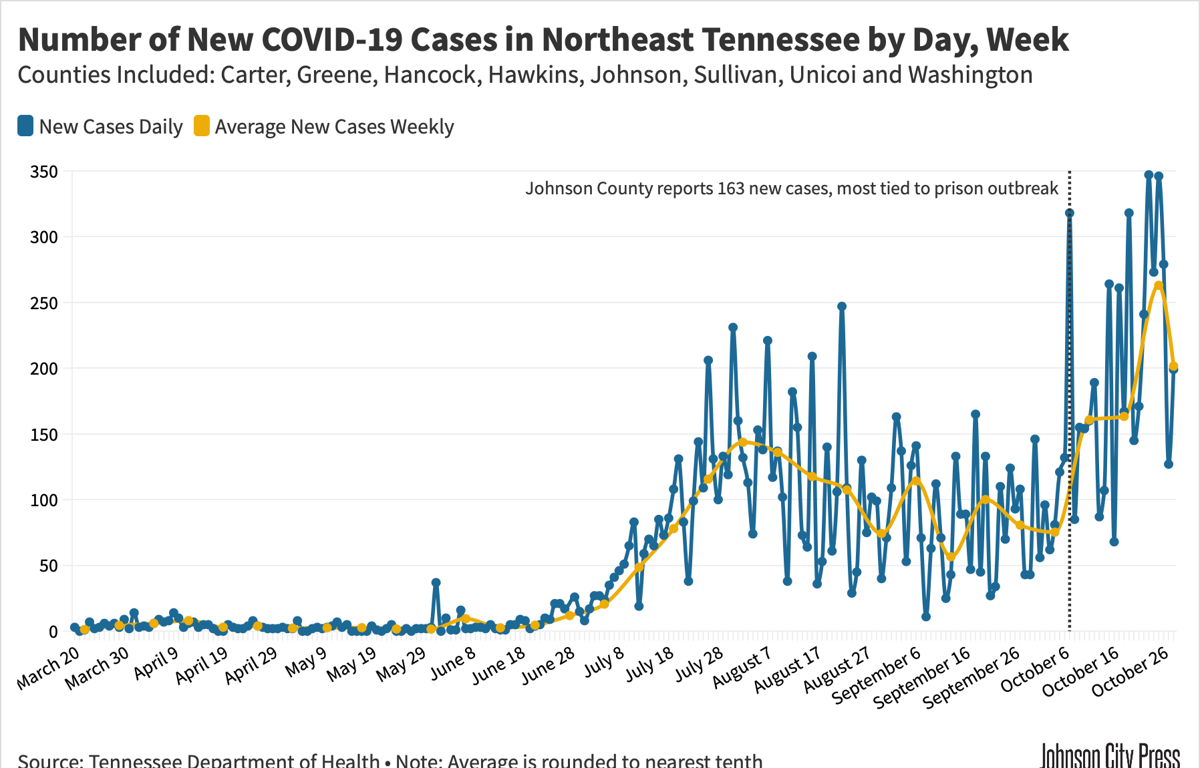 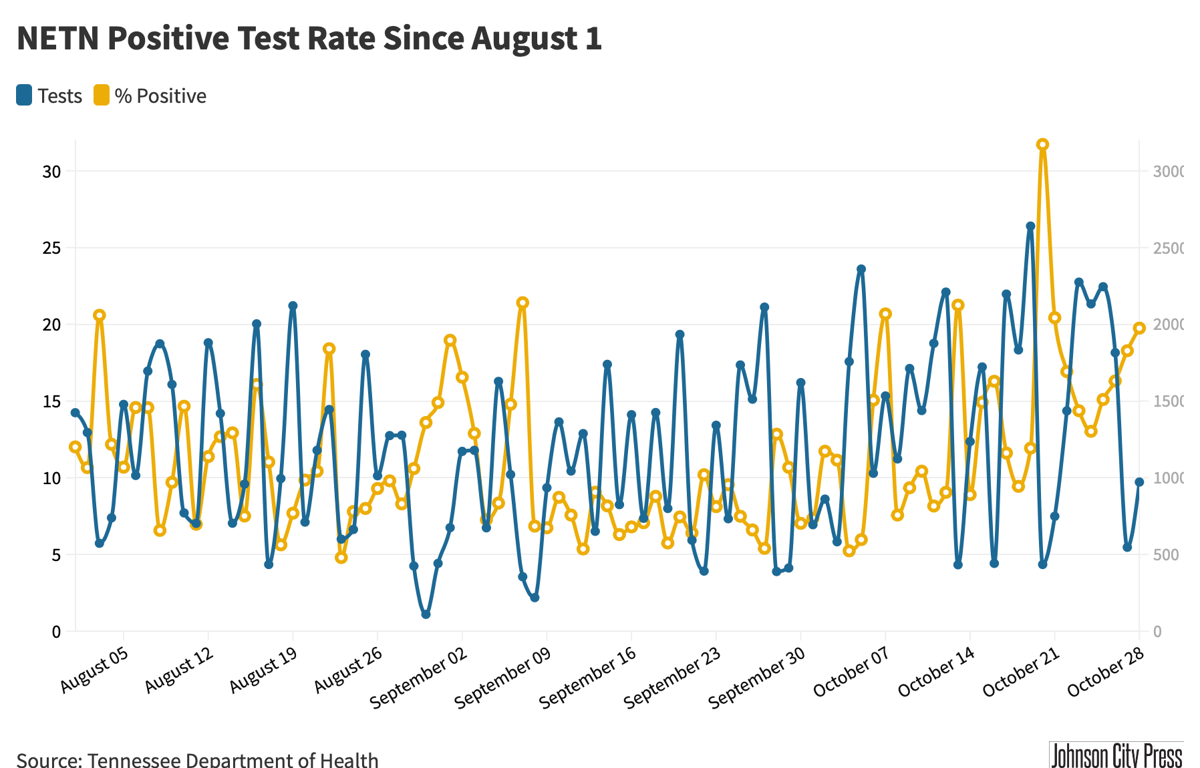 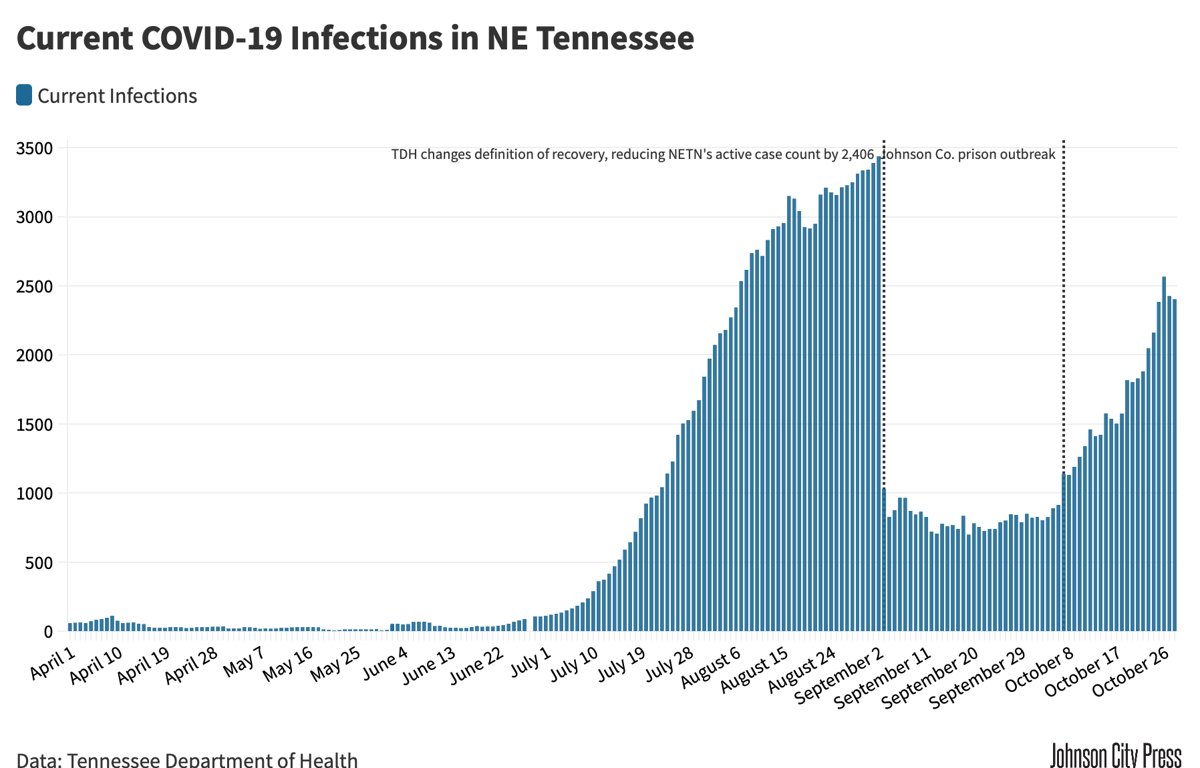 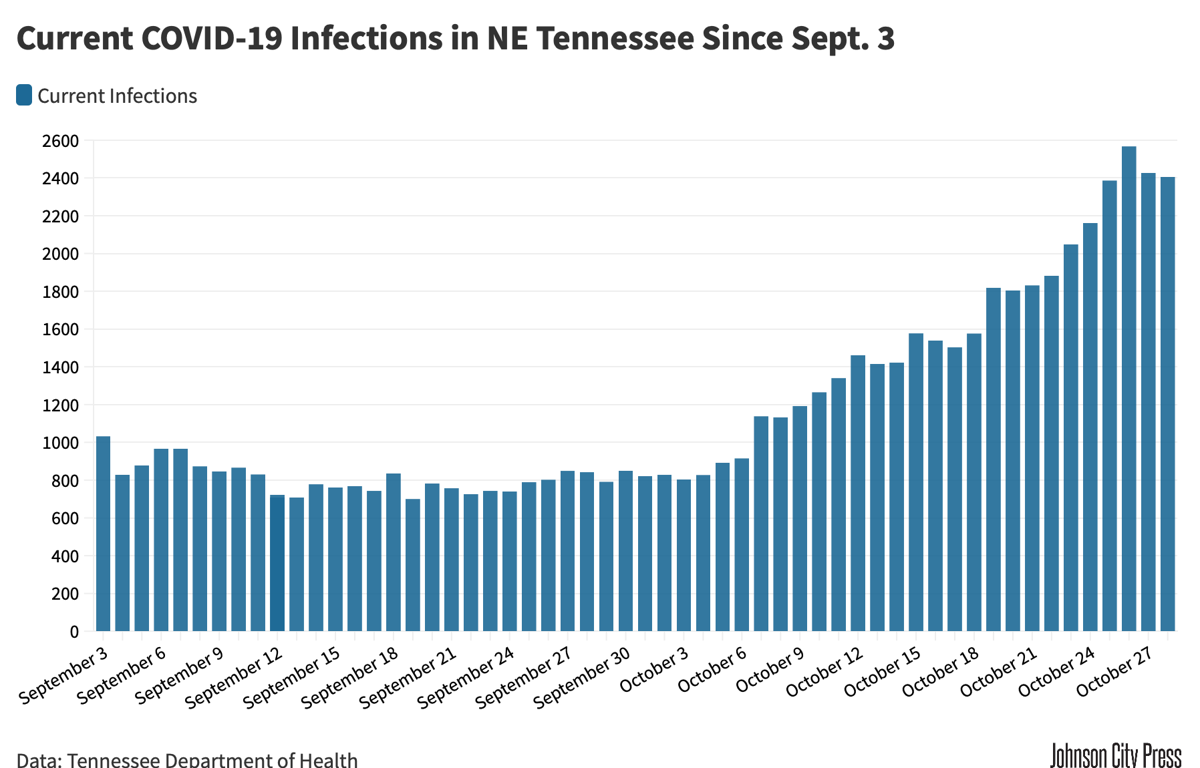 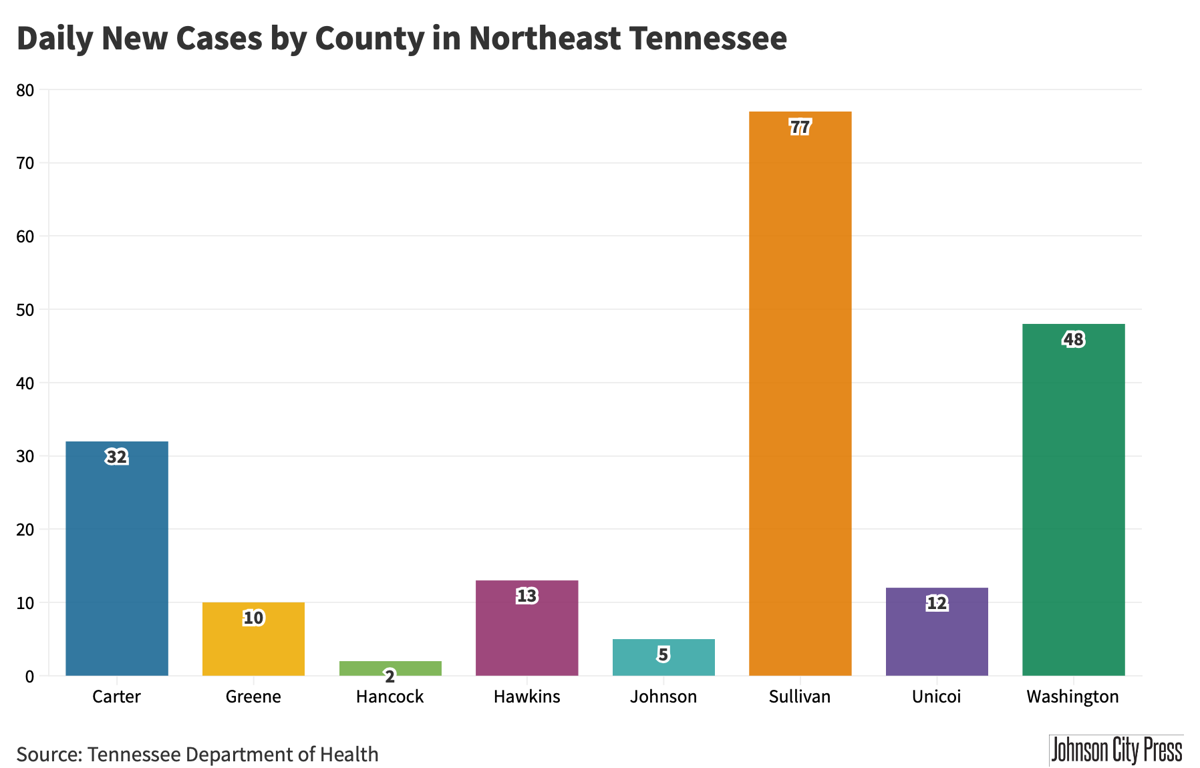 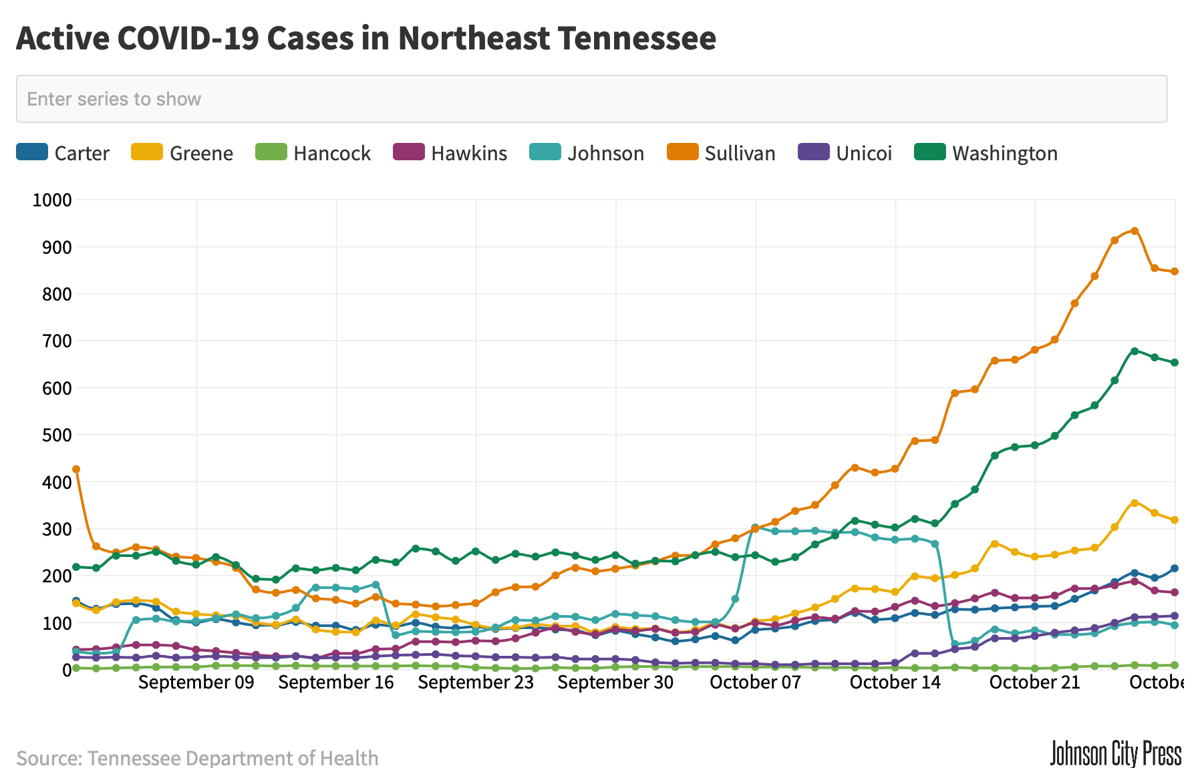 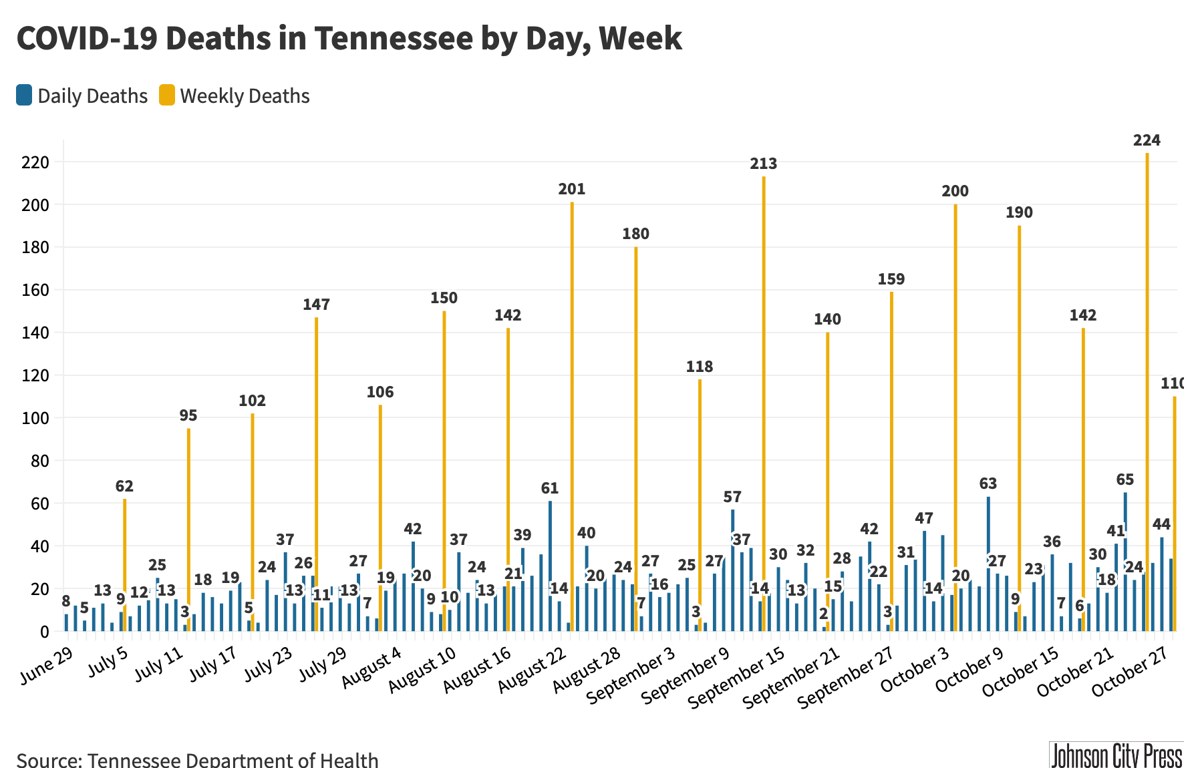 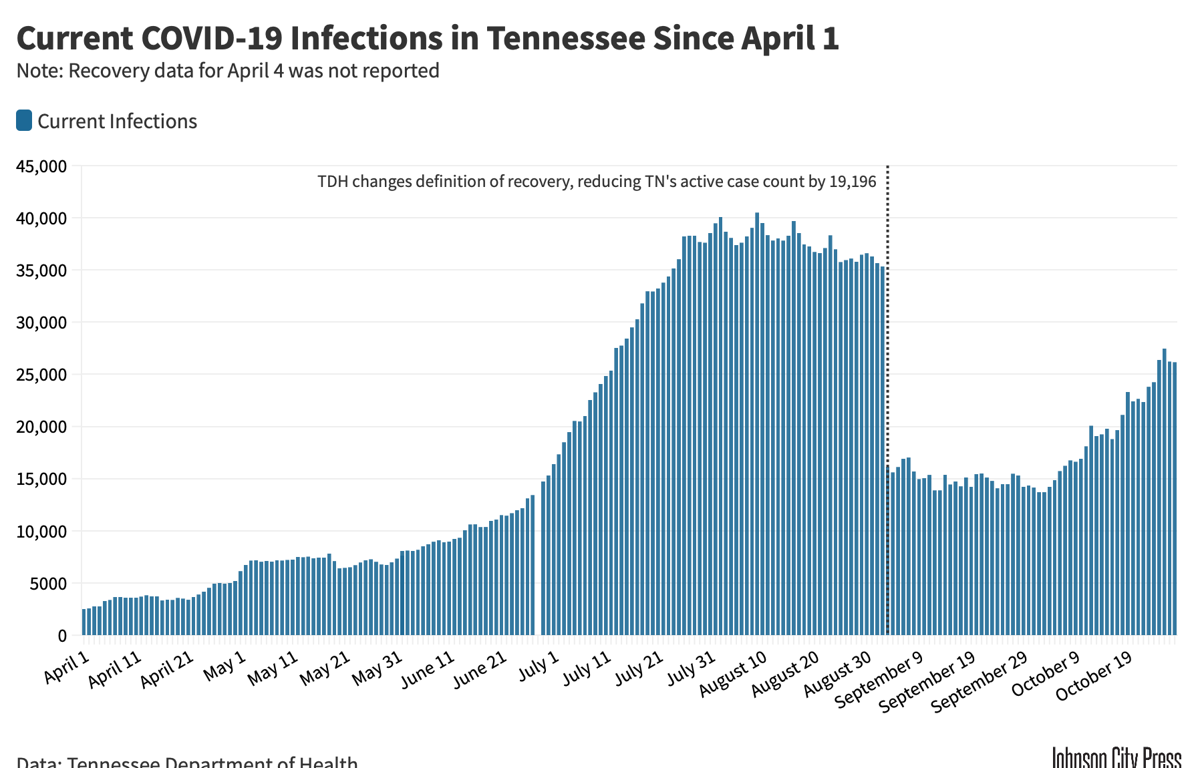 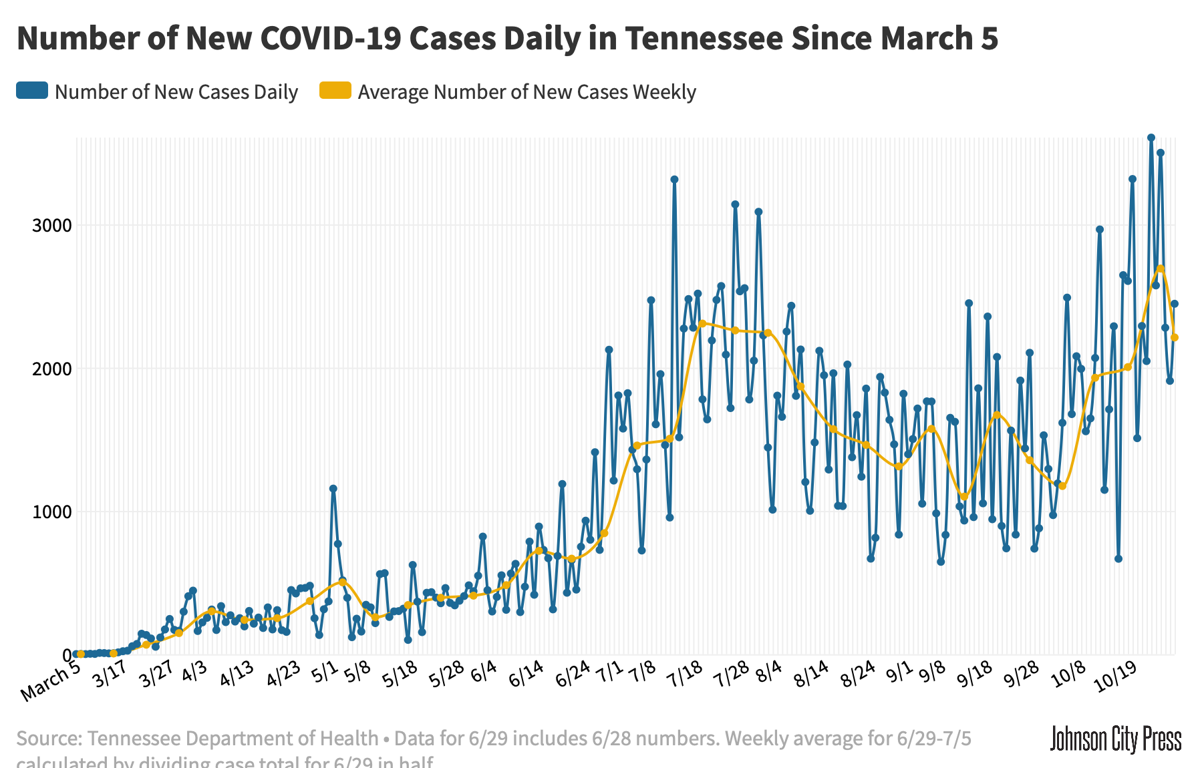 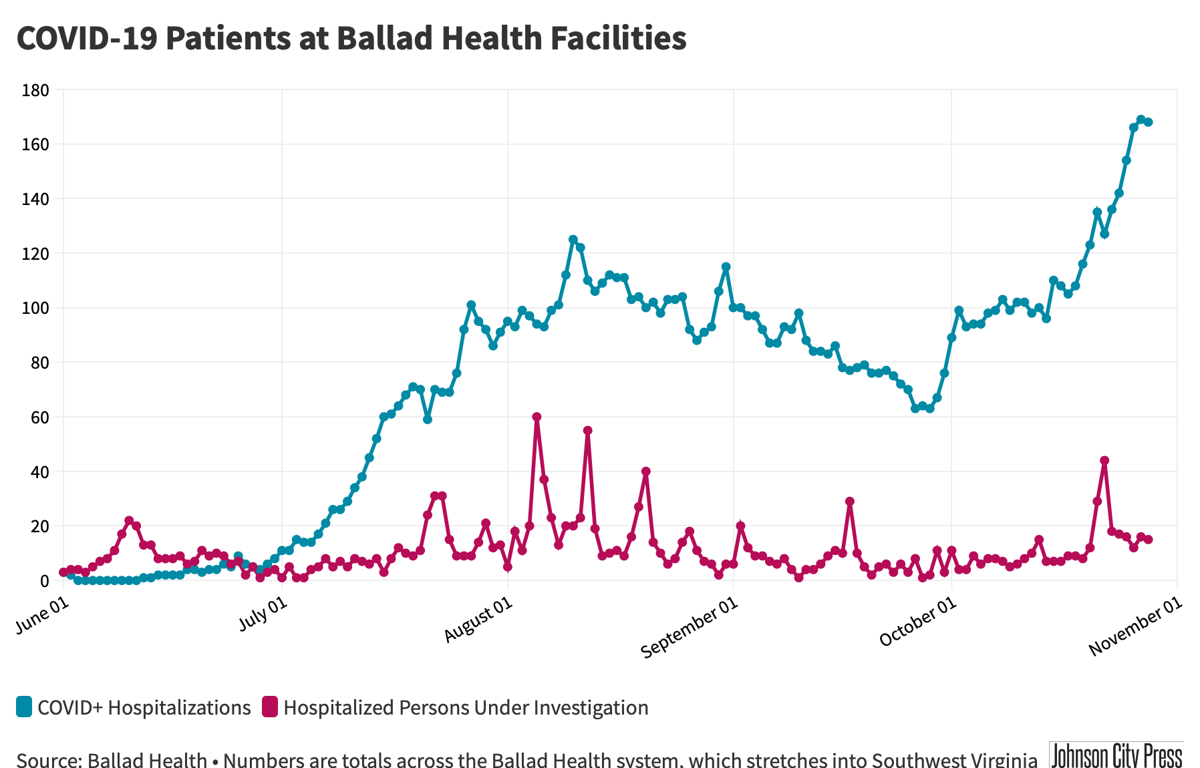 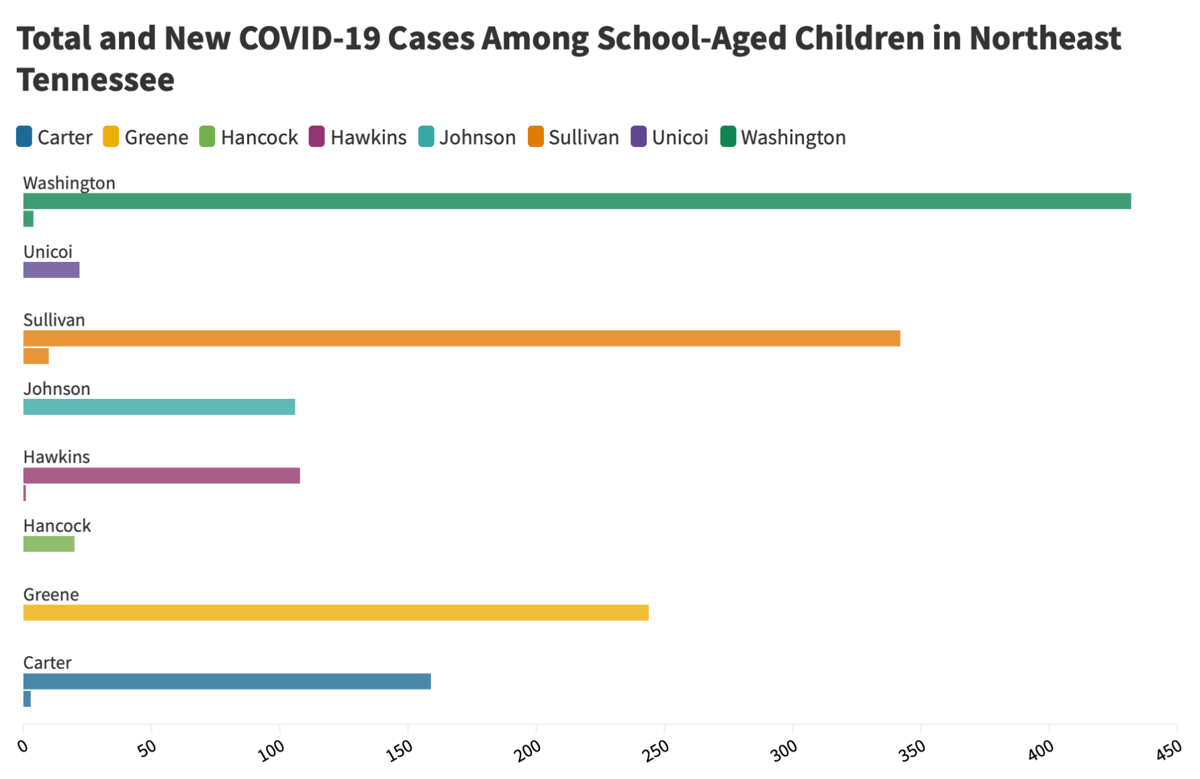 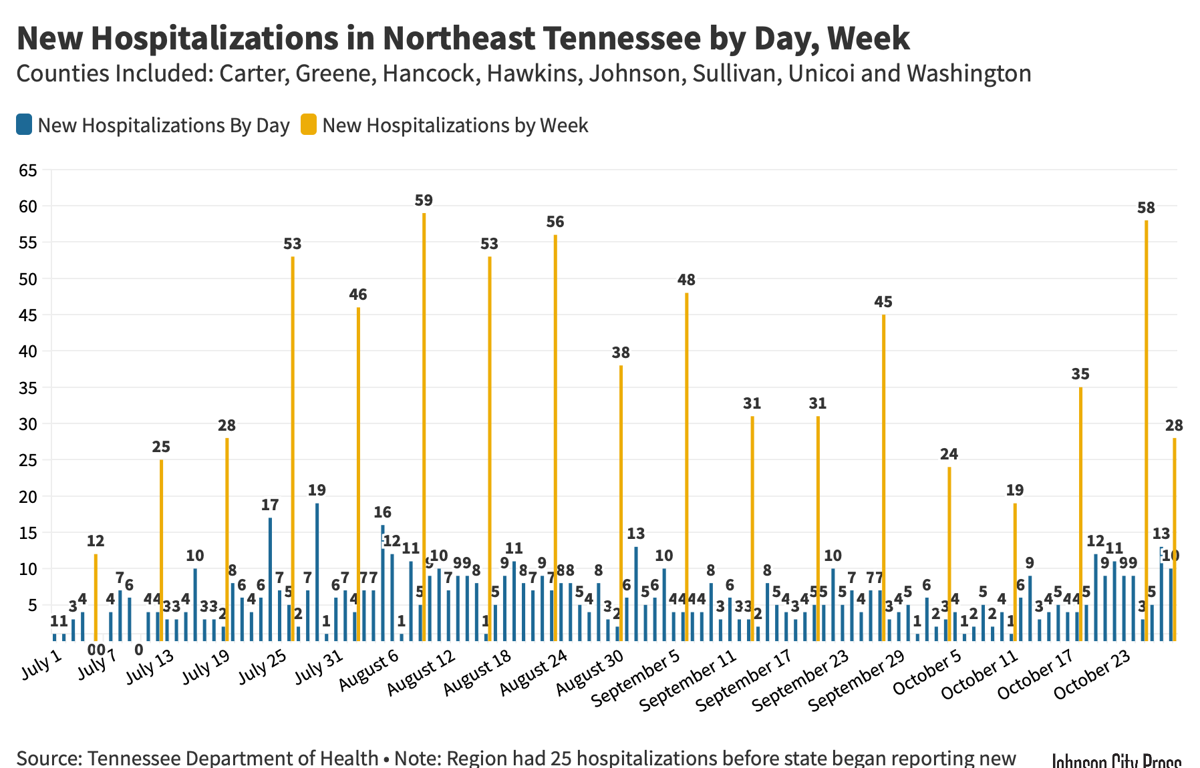 The record day comes after Ballad Health officials issued a stark warning during a press briefing earlier Wednesday, saying the region is in a dire situation with rising case counts that could overwhelm the health system. According to Ballad’s estimates, there could be upwards of 300 new hospitalizations in Northeast Tennessee and Southwest Virginia in the two-week period from Oct. 25-Nov. 7.

Though testing slowed in Northeast Tennessee this week, the spread of the virus has not. Despite recording fewer than 1,000 new tests on Wednesday, the region added 199 new cases — a record for a day with fewer than 1,000 new tests. Wednesday’s total was the 14th highest single-day total reported in the region, though each day higher recorded at least 1,445 new tests, with an average of 2,004 new tests on those days.

Northeast Tennessee also set a record for consecutive days with more than 100 new cases, breaking the previous record of 11 set in July/August. During this current streak, only four days — including Wednesday — have seen fewer than 200 new cases.

Not surprisingly, Wednesday’s positive test rate was high, coming in at 19.75%. Of the counties with more than 10 new tests, Carter County had the highest positivity rate: 33% of 100 tests. Sullivan County, in a reversal from previous days, had the lowest positivity rate, though it was still high at 16.21%. Sullivan County also reported the most new tests with 418. Washington County had the second most tests (236), and the fourth highest positive test rate at 23.52%.

Ballad Health’s COVID-19 hospitalizations fell by one, though the number of patients in the intensive care unit rose again and remain at a record level. As of Wednesday afternoon, there were 168 (-1) hospitalizations with 35 (+2) in the ICU and 15 (+0) on ventilators.

During a press conference on Wednesday, Ballad officials were frank, calling the current situation dire. Ballad’s Chief Infection Prevention Officer Jamie Swift said the region was “in a really bad place in this pandemic” and called on people to step up to help slow the spread of the virus. According to Ballad’s projections, hospitalizations are expected to cross the 200-mark sometime next month and could get as high as 350 by year’s end if there isn’t stricter adherence to public health guidelines.

In the two-week period from Oct. 25 to Nov. 7, the healthcare system is projecting 300 new hospitalizations. Ballad officials said Johnson City Medical Center and Bristol Regional Medical Center are expected to implement plans to begin deferring some elective procedures in the coming days as a result of the surge, but said both hospitals weren’t yet at that point.

Washington County reported four new cases among school-age children, a day after several cases of COVID-19 forced Liberty Bell Middle School in Johnson City to revert to virtual learning for at least two weeks. According to the Johnson City Schools dashboard, there were 522 students in quarantine as of Tuesday evening, with 23 in isolation after testing positive.

In addition to the cases in the Johnson City Schools system, the University School on the campus of East Tennessee State University reported three cases of COVID-19 after releasing a dashboard on Tuesday. Fifteen people were quarantined, and 11 people had inactive cases. The University School dashboard does not differentiate students and staff.

East Tennessee State University, meanwhile, reported a slight drop in active cases and the number of people quarantined in ETSU housing, which dropped to 24 (-3) and 48 (-1), respectively. Since Monday, ETSU has reported 17 cases of COVID-19.

Other cases among school age children were reported in: Carter (+3), Hawkins (+1) and Sullivan (+10) counties.

For the second straight day, the Mountain Home VA reported a new fatality and a record number of active cases, which increased by two from Tuesday’s count. As of Wednesday, there were 677 (+12) total cases, of which 104 (+2) were active and 539 (+9) were inactive. There have been 34 (+1) deaths.

Cases attributed to Mountain Home reflect people tested or treated at the facility for known or probable COVID-19 infection. Mountain Home officials are not saying where the deaths or cases are concentrated, citing privacy concerns, but the cases are reflected in data released by the state daily.

Tennessee could be headed for a record week of deaths, with the state averaging 36.6 reported deaths per day after reporting 34 more on Wednesday. If the state keeps that pace for the rest of the week, it would easily top last week’s record of 224.

Hospitalizations meanwhile, continue to be undercounted. Of the 111 hospitals that typically report, only 106 had reported data as of 3 p.m. On Tuesday, a similar delay led to only 1,223 hospitalizations reported as of 3 p.m., a total that was updated on Wednesday to show that, in actuality, there were a record number of hospitalized COVID-19 patients on Monday (reflected in Tuesday’s data).

During Ballad’s press briefing, Ballad’s Chief Operating Officer Eric Deaton said the Tennessee Department of Heath migrated to an online reporting system, which could be what’s causing some of the delays. Deaton said Ballad was a day slow in reporting some data over the weekend, but is now caught up. The Press has reached out to the health department to learn more, but has yet to hear back.